Welcome to the round up for July.
The start of the month saw two significant happenings on the local bus scene.
In the London area, from 6/7/14 fares went “cashless”. This meant that all bus tickets had to be pre-paid/bought before travel. The majority of bus journeys in Greater London now utilise Oyster or Travelcards anyway, with cash fares falling to a negligible amount – 1% of total journeys. Fares can also be tendered with contactless bank (credit or debit) cards, and facility is available where if one is out of credit on their Oyster Card, they have a “spare journey” available, before they need to top up again. Transport for London reckon a saving of £24 million will be made from the abolition of cash fares. However, some “cross border” TfL routes will still take cash transactions; for example the Essex sections of 370, 372 and 498, and the 84 in Hertfordshire.
Meanwhile, just for the day, on 7/7/14 the Tour De France came to Essex, on its stage three, from Cambridge to Buckingham Palace. The cyclists raced through the county in a “zig zag”, passing Saffron Walden, then south east through Finchingfield to Braintree; then sharp west to Felstead, before striking to south to Chelmsford, the county town. After this, the western path was regained, towards Epping, though Loughton and on into the Metropolis. Not surprisingly, there were significant alterations to bus services along the “tour” route, with curtailments and some suspensions. 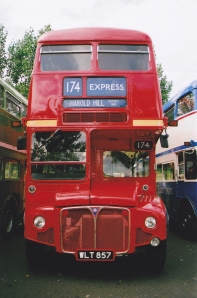 Over the weekend of 12th to 13th July, there was a celebration of six decades of the London Routemaster, with the ‘Routemaster 60’ event at Finsbury Park. It must be remembered that Routemasters were common in Metropolitan Essex up to the mid 1980s (route 86 from Limehouse to Romford was one of their last haunts) – in the case of the red RMs, while their green RML country cousins lasted until 1979 – latterly around Grays. Red Routemasters also used to visit rural Essex hinterlands, such as Lambourne End, in days past. ‘Busmopolitan’ (just) managed to get to Finsbury Park, to admire the Routemaster extravaganza, before the event closed on the Sunday.
Later in the month, it was “the end of an era” in Colchester, with the cessetation of bus operations from the Hedingham Omnibuses outbase at Little Tey. This was the former C and R Coaches depot, which Hedingham bought in January 1982. The Church Lane site had continued as a “full depot” until 2001, when most activity moved to Kelvedon, and it became a 2 vehicle “dormy shed”. Mr and Mrs Copeman, son and daughter in law of one of the C and R founders have now decided to retire; their Stanway School runs joining the Tollesbury fold from September. The old C and R premises survive as workshops – for JD Racing and the Copeman’s own classic military vehicle and tractor engineering business.
C and R stood for Copeman and Raven, being founded in 1953. Mr Raven only stayed in the partnership for two years. The base at Little Tey was established in 1955.
Hedingham’s outbase at Parkeston also closed. This was a relic of Partridge Coaches, who Hedingham acquired in 1989. Back then, there was a school bus outstation on some wasteland (now built on) at Harwich Bathside. Hedingham then moved the 2 vehicles to Harwich Bus Station, until a yard off Europa Way at Parkeston became available in the early 2000s. The work at Parkeston was partly lost and partly transferred to Panther Travel, along with the 2 staff. 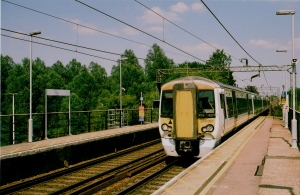 Above: 379007 made a most unusual appearance on the Great Eastern Main Line on 30/7/14, when it formed the 3G01 Norwich-London working. It was pictured at Kelvedon.

321442 has been named ‘Crouch Valley – 1889-2014’; to celebrate 125 years of the Wickford-Southminster line.
From 21/7/14, a new Cambridge to Stansted Airport service began; complementing that already provided by Cross Country, from the Midlands.
New branding on stock by the end of July, looked something like this:
All of the Class 90 + DVT sets; the Class 153, 156, 170 DMUs and Class 317, 321, 379 EMUs had been rebranded. Some of the Class 360 emus were being rebranded at this time, while all of the Class 315 EMUs had no branding at all – possibly reflecting the changes to this type’s operation in the not too distant future.
DVT 82103 has been outshopped in the new AGA livery, ex ONE. 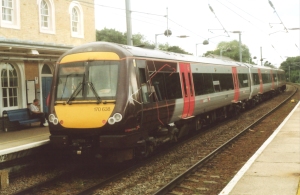 Above: Cross Country Turbostar DMU 170638, calls at Audley End on a Birmingham-Stansted Airport service in August 2008. 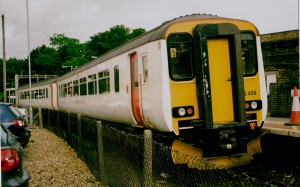 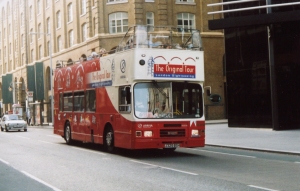 BLUE TRIANGLE.
Volvo B7TL/Wright Gemini WVL91 (LF52 ZNZ), which had been returned to London General; has now passed to Ensign. 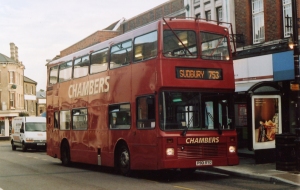 CT PLUS.
Dart SLF/Mini Pointer DPS2 (BU05 HFG) has been withdrawn due to fire damage.

DOCKLANDS LIGHT RAILWAY.
Units 83 and 88 were specially reliveried for the finish of Tour De France stage 3 in London.
83 was repainted yellow, and 88 green. These were the colours worn by the two leaders at the start of stage 3; neither of whom unfortunately completed the race. 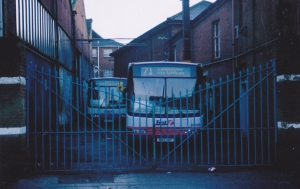 Above: First Essex Scania/Wrights parked at Magdalen Street depot in Colchester in December 2012. The incident described above, happened in the yard to the left of where this picture was taken. 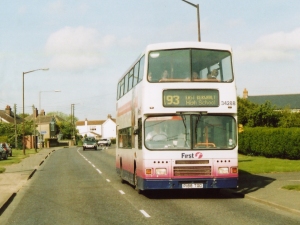 Above: Now withdrawn First Essex Volvo Olympian/Alexander RL 34288, passes through Lawford on a morning journey of route 193, in May 2005. The bus was working from Harwich depot at the time; also now closed. 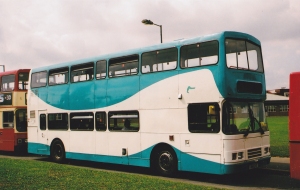 GALLOWAY, MENDLESHAM.
Dennis Dart SLF/Plaxton Super Pointer 308 (R80 PSW) has been re-registered back to its original R925 RAU; prior to sale.

GRAHAMS OF KELVEDON.
The only stage service worked by this operator; 383 (New Rickstones Academy-Witham) ceased after 25/7/14. In practice, this was a school contract registered as a local bus service. 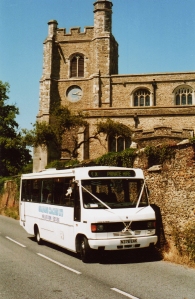 Above: The regular vehicle on the 383 was “dual purpose” Mercedes 811D/Plaxton Beaver N376 EAK.
However, this view shows in on a wedding charter at Bocking in May 2008. 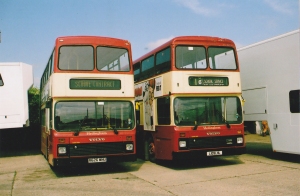 Above: Hedingham Volvo Olympians 71 and 65 at Little Tey, on the last day.

LONDON CENTRAL.
There have been calls to increae the frequency of TfL108 (Stratford-Lewisham), due to serious peak overcrowding problems. One suggestion is to introduce aditional North Greenwich-Lewisham short workings; thus reintroducing a sort of route 108A, which last ran in 1970.

LONDON UNDERGROUND.
The last self propelled working of C stock occurred on 9/7/14, when 5721 + 5531 + 5578 were moved from Hammersmith H and C depot to Ealing Common District depot.
5721 has joined the London Transport Museum Collection, at Acton depot; while 5701/29 were donated to Royal Greenwich University Technical College.
The remainder all went (by road), to Booth Roe at Rotherham for scrap. 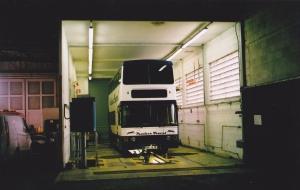 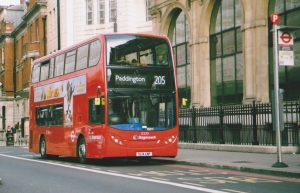 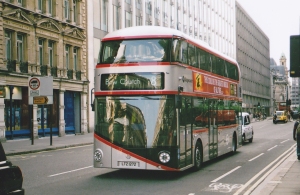 STAN’S OF GREAT TOTHAM.
This operator is “down sizing”, and will run only a couple of school contracts in the next academic year.
Bova Futura VWH 836 has been sold to Acme Travel of Molehill Green.

STEPHENSONS OF ESSEX.
Leyland Olympian/Alexander RH 972 (K872 CSF) has passed to a private owner at Tunbridge Wells, Kent – for conversion into a mobile recording studio ! NC bodied Leyland Olympian 866 (J566 HAT) has also been sold.
From 28/7/14, a circular shuttle service was provided around Tiptree; centred on Maypole Road (north end), and running anti-clockwise via Church Road, Station Road, Kelvedon Road and Oak Road. This was a daily operation, linking into First routes 75/A (Colchester-Tiptree/Maldon) at ‘The New Times’, and ran 0700 to 1900 M-Sat and 0900 to 2200 Suns/hols.
This was due to roadworks on the B1022 Maldon Road between Smythes Green and Tiptree, and was scheduled to run until 31/8/14. No fares were charged. 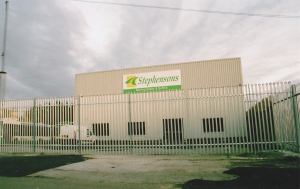 Above: The frontage of Stephenson’s new Boreham depot, seen on 13/7/14.

TERRAVISION.
New are Volvo B12T/Sunsundegui SC7s BL14 LSV/X.
They are operated by Excalibur Coaches of London. 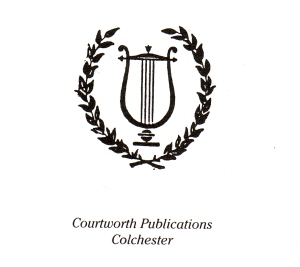