Welcome to the June 2018 edition of Busmopolitan.
Out of the Busmopolitan area, but of great significance, is the sale of East Yorkshire Motor Services (EYMS) to Go -Ahead. This was formally announced on 18/6/18.
EYMS was one of two remaining independant former NBC companies. Trent Barton is the only one left which is still descended from its original management buyout. All other ex NBC subsidaries are part of the big groups. EYMS does run into the Busmopolitan “patch” on National Express 484 workings from London to Clacton and Walton, and their tour coaches may also be seen visiting the area.

On 26/6/18, there was a fatal collision between a bus and a lorry, just to the north of the Busmopolitan area. First Eastern Counties ADL/Enviro 400 33804 (YX63 LJJ), on the 0700 eastbound XL Peterborough to Norwich service collided with a Scania artic of Bretts Transport on the A47 at Guyhirn at 0730. The bus driver and 1 passenger were killed, with 17 other bus passengers injured. Our thoughts go out to all involved. 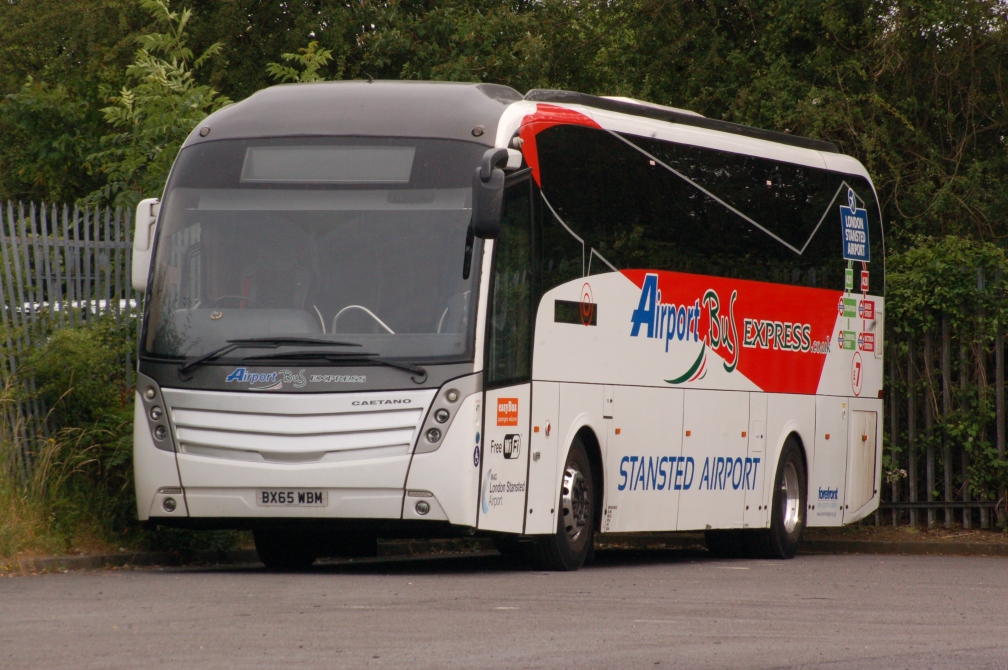 ARRIVA KENT THAMESIDE (NETWORK HARLOW).
Volvo B7RLE/Wright 3815 is from Southend.
Mb Sprinter 1011 was briefly here.
Mb Sprinter 1015 (BF67 WGN) is also now here, on loan. It had been delivered to Stevenage, then moved in quick succession to Hemel Hempstead and then Ware. Minibus operation in Hemel, ceased after 30/6/18, by the way, having only been introduced some 7 months earlier. 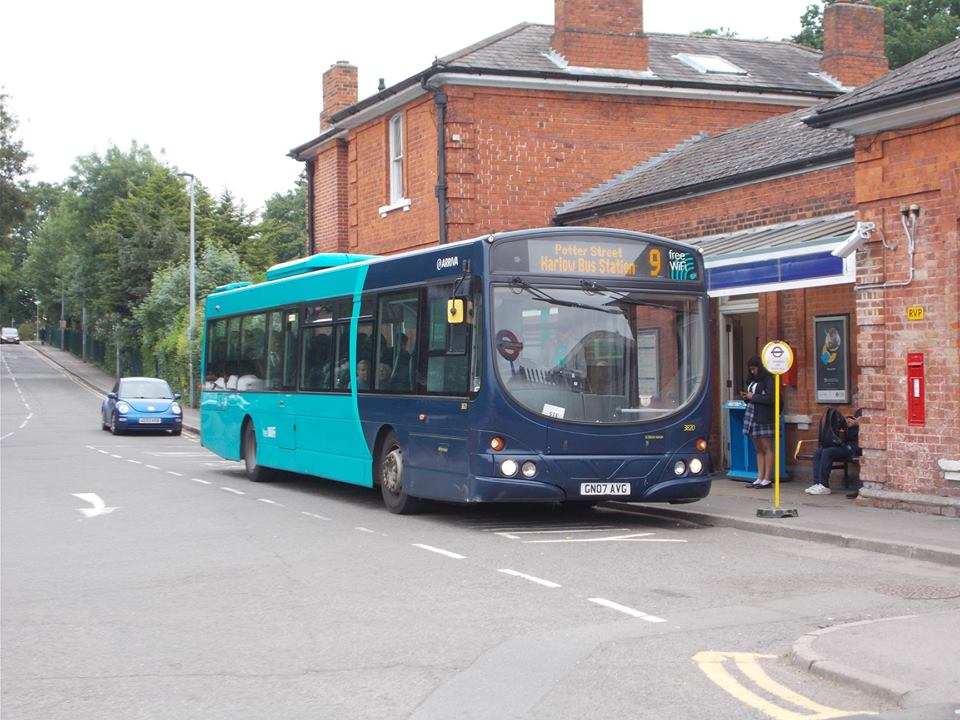 Above: Volvo B7RLE/Wright Eclipse Solar 3820 was originally at Northfleet, and subsequently Southend before reaching Harlow. It retained its MAX livery from its last posting, when pictured at Epping station, on 4/6/18. (Daniel Acott).

BARKERBUS, ROYDON.
Bedford VAL70/Plaxton Panorama Elite VBD 310H is back in use – as a heritage vehicle.

BLUE TRIANGLE.
All of the WVLs now with Metrobus have now been converted and repainted for use on route X26 (Croydon-Heathrow).
ADL/Enviro 200/MCV Evolution ED15 (AE56 OUO) has passed to Ensign; ED21 (LX07 BYM) was resold by Ensign to National Driving School, Croydon.
The old depot at Ferry Lane, Rainham has been demolished. 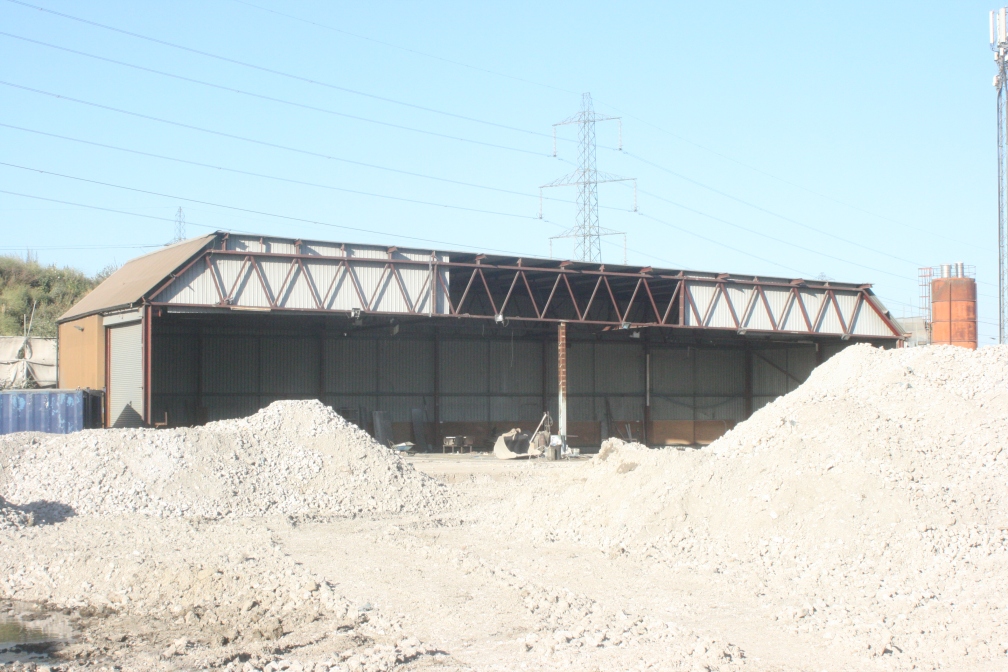 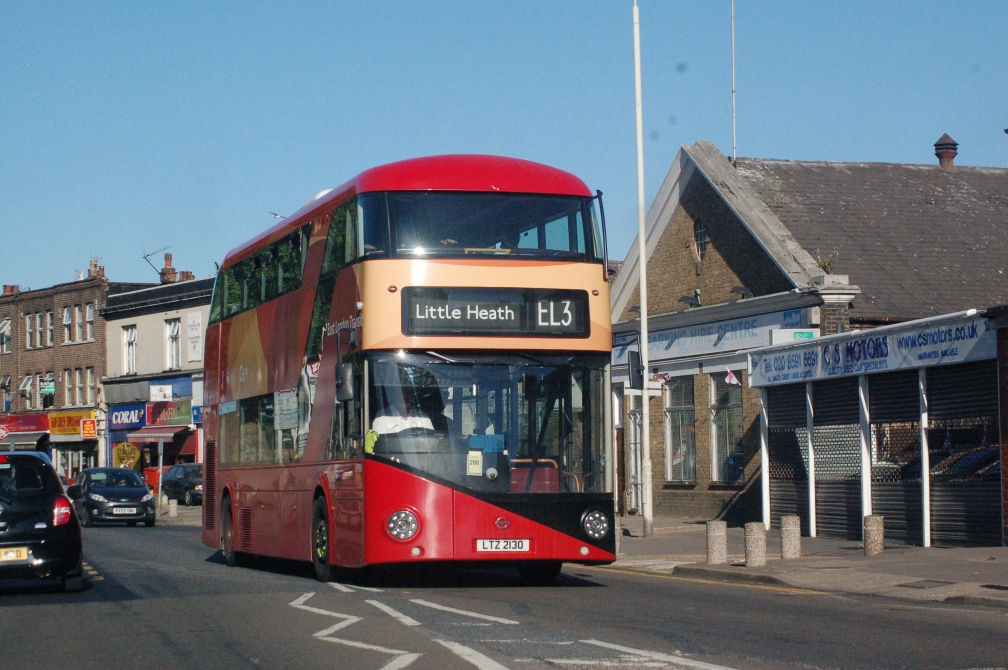 Above: The level crossing at East Tilbury in the early hours of 21/6/18. This is on the Grays to Pitsea ‘Tilbury Loop’ line and the railway station is off the left of this picture, with the old crossing keeper’s cottage visible to the right. Linford is beyond the crossing. (Daniel Disbury). 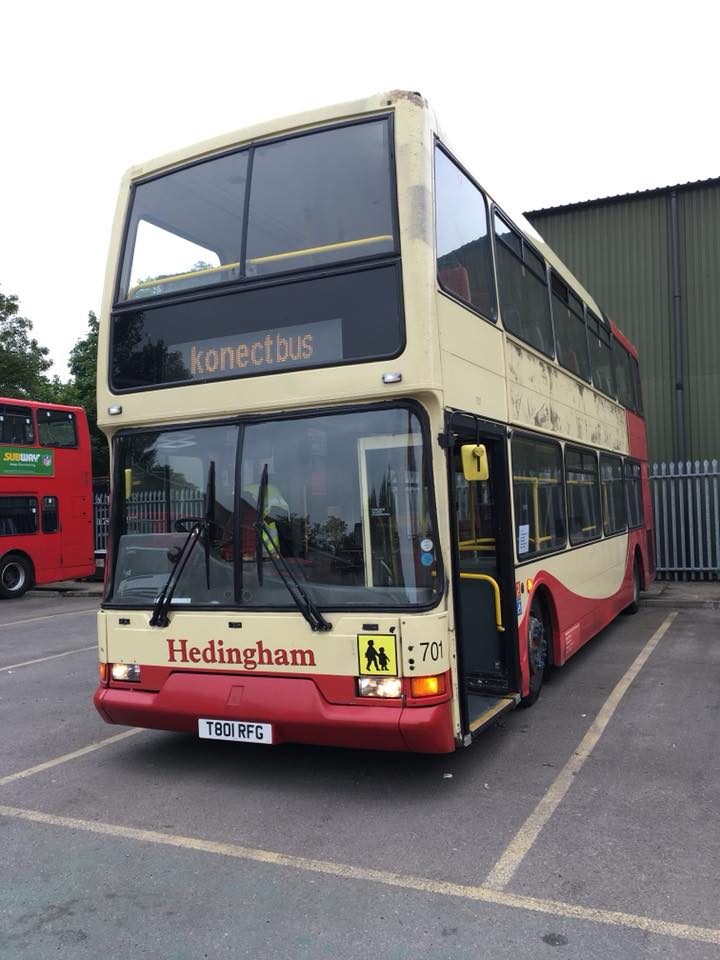 From 4/6/18, there were revisions to registered school routes 752, 755, 756. There was also an exchange of some work with Hedingham. The Stour Valley Academy, Clare contract, Stanway School ST1 (Chappel-Stanway) and 89X (Sudbury-Halstead-Braintree) went to Hedingham. ST2 (Wormingford-Stanway School) came from Hedingham, along with Dennis Trident/EL 701 (T801 RFG). 701 was operated ‘on hire’. ST2 went back to Hedingham from 11/6/18, but to Kelvedon, rather than its previous base of Clacton. 701 was returned to Hedingham at Clacton on 9/6/18. Ex London General Volvo B7TL/Wright Gemini 526 (LX06 EAJ) is now here.
Scania Omnidekka 801 (YN55 PZC) was loaned to Hedingham (Sible Hedingham), for the Stour Valley Academy contract. It was swapped with 800 (YN53 RYP) in late June.
Scania Omnidekkas 805/7 (YN55 PZG/J) were loaned to Hedingham (Kelvedon) in early June, mainly for 89X/ST1. 805 was used initially, then swapped with 807.
807 came back in mid June, in exchange for 809 (YN55 PZM).
All of the Omnidekkas had been renumbered by the end of June. 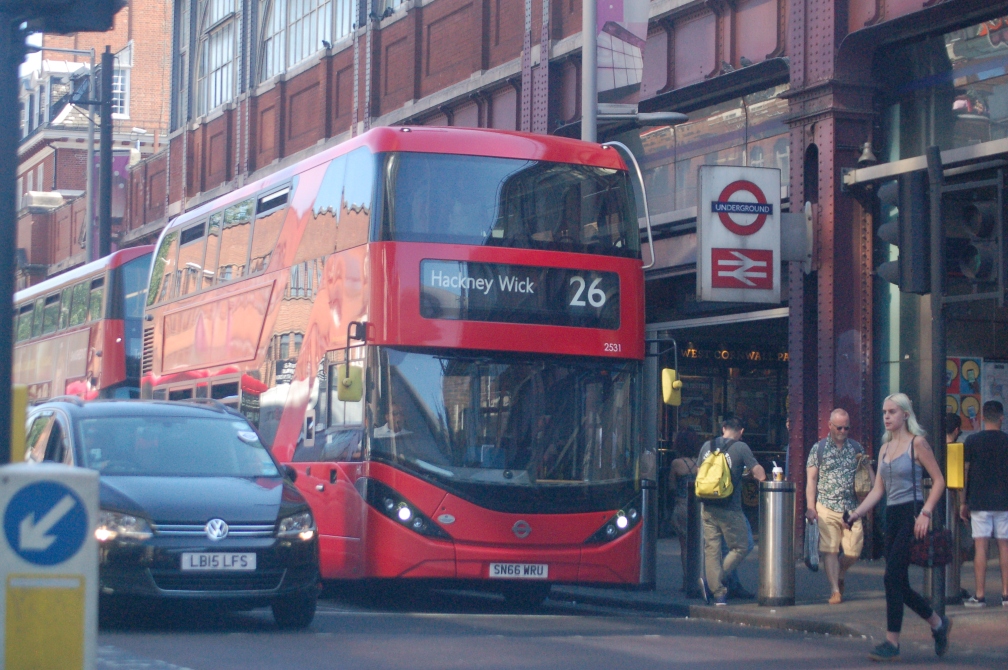 Above: ADL/Enviro 40H City 2531 begins its northbound journey from Waterloo, on 30/6/18. The VW Sharan can to the left is a phv with Addison Lee, rather than an “authentic” London ‘Black Taxi Cab’. (John Podgorski).

EMIRATES.
From 8/6/18, a new Dubai-London Stansted service commenced. New 3 class Boeing 777-200s are used. Emirates aircraft have been seen at Stansted previously, but on charters or freight. 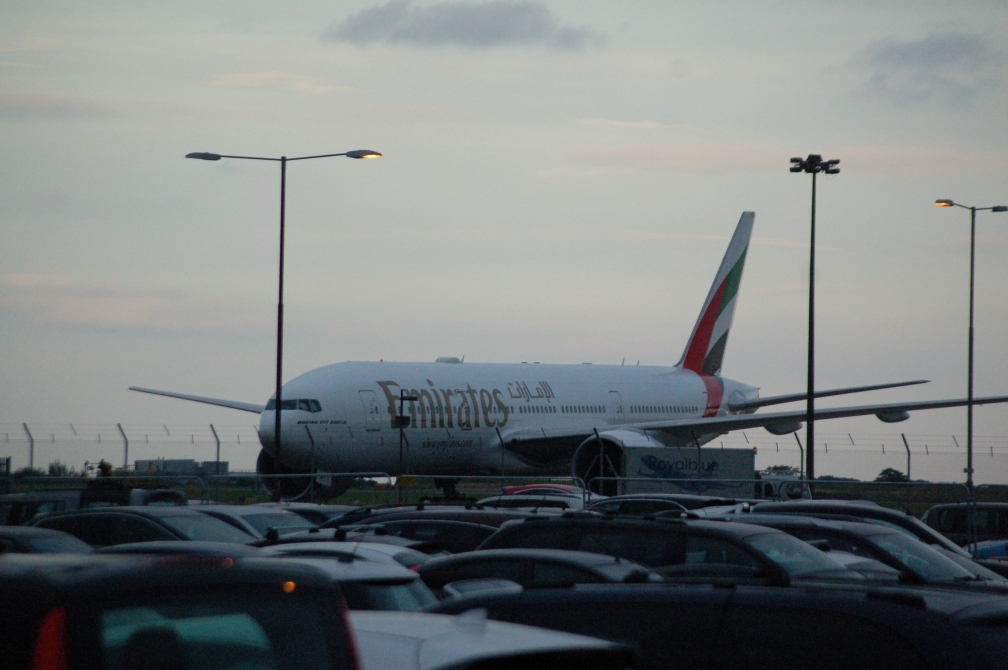 ENSIGNBUS.
Now has ex Go-Ahead London Volvo B7TL/Wright Geminis 102/3 (LX53 BAA, BBF). They have been converted to single door and fitted with led displays.
Dennis Trident/EL 196 (PX 55 AHG) has passed to Axe Valley Motors of Seaton, Devon. This was the last Trident operated by Ensign.

ESSEX CC – COMMUNITY LINK.
New is Mb Sprinter LX18 BYO. It is at Harlow for service 381 to Toot Hill. 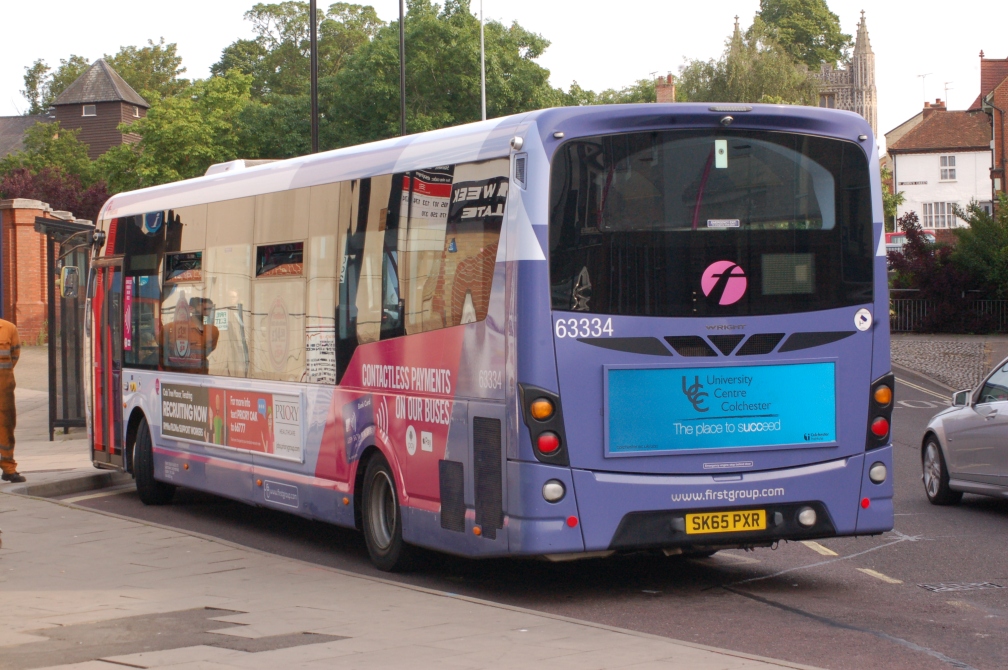 Above: Recently acquired and repainted VDL Bova SO15 UBS, on Lexden Road, Colchester on 12/6/18. (John Podgorski).

GBRf.
It has been announced that 16 Class 56s are to be acquired from UK Rail Leasing.

Above: An unidentified GBRf Class 73 on sandite duty at London Victoria on 4/11/17. (John Podgorski).

Above: It’s the start of the evening rush hour on Friday 15/6/18, as homebound commuters board Clacton on Sea bound Renatus 321314 at London Liverpool Street. (John Podgorski). 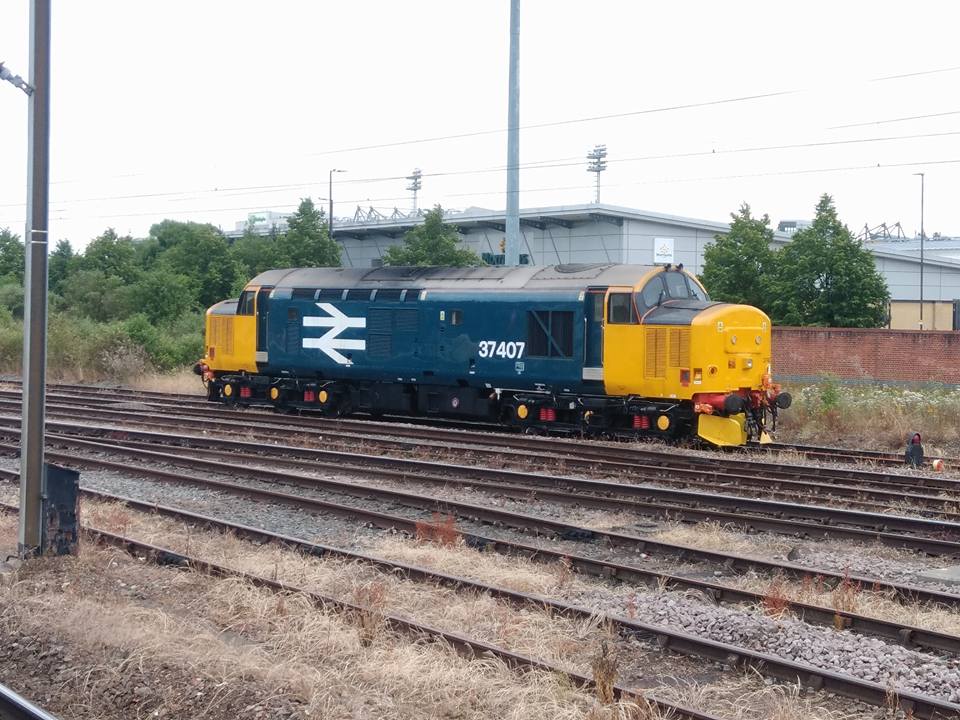 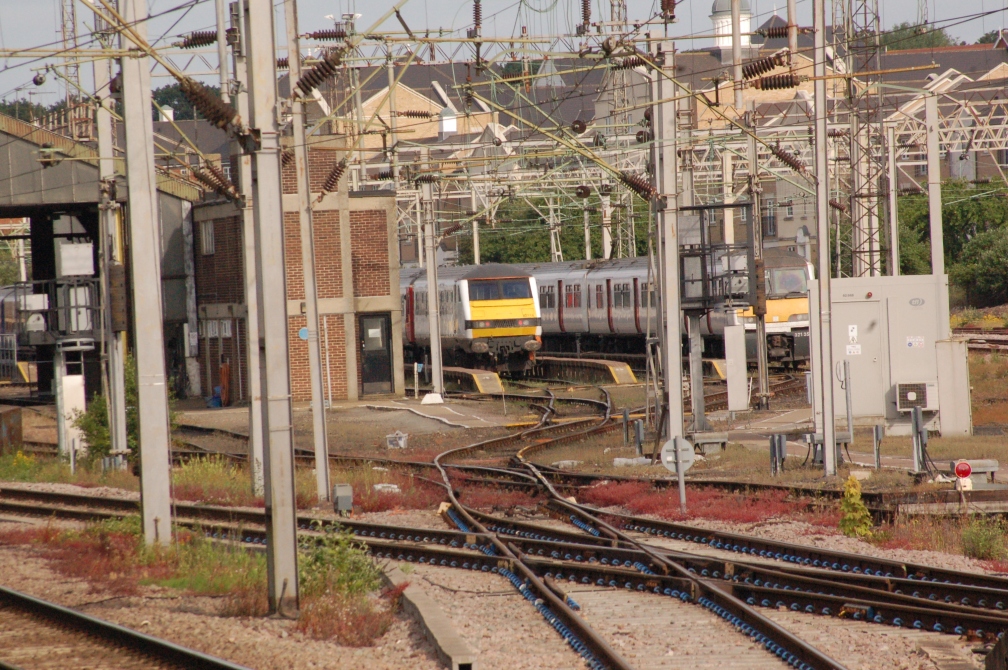 Above: DVT 82118 unusually stabled at Colchester on the morning of 15/6/18. This was due to an earlier points failure at London Liverpool Street, putting stock “out of position”. (John Podgorski).

HEDINGHAM.
89X (Braintree-Sudbury) and Stanway School ST1 (Chappel)  have come from Chambers; along with the ex Turners Stour Valley School, Clare contract. ST2 (Wormingford-Stanway School) moved to Chambers from Clacton (CN). All effective from 4/6/18.
4th June also saw experimental changes to the Honywood School contracts. HY1 (Silver End-Coggeshall) was revised to run over the old HY2 (Kelvedon-Feering-Honywood) beyond Kelvedon One Stop. The old Kelvedon-Honywood section of HY1 (via Observer Way), was replaced by an extension of HY4. This was achieved by HY4 being altered to run the same direction both am and pm. HY4 operated as Marks Tey rail station-Copford-Easthorpe-Kelvedon-Coggeshall. Dennis Trident/EL 701 (T801 RFG) moved to Chambers with ST2.
The experiment was short lived. 11th June saw HY2 reinstated, due to capacity issues on HY1 and HY4. The latter reverted to their previous routeings. ST2 transferred into KN from Chambers on the same date, with Trident 701 returning. 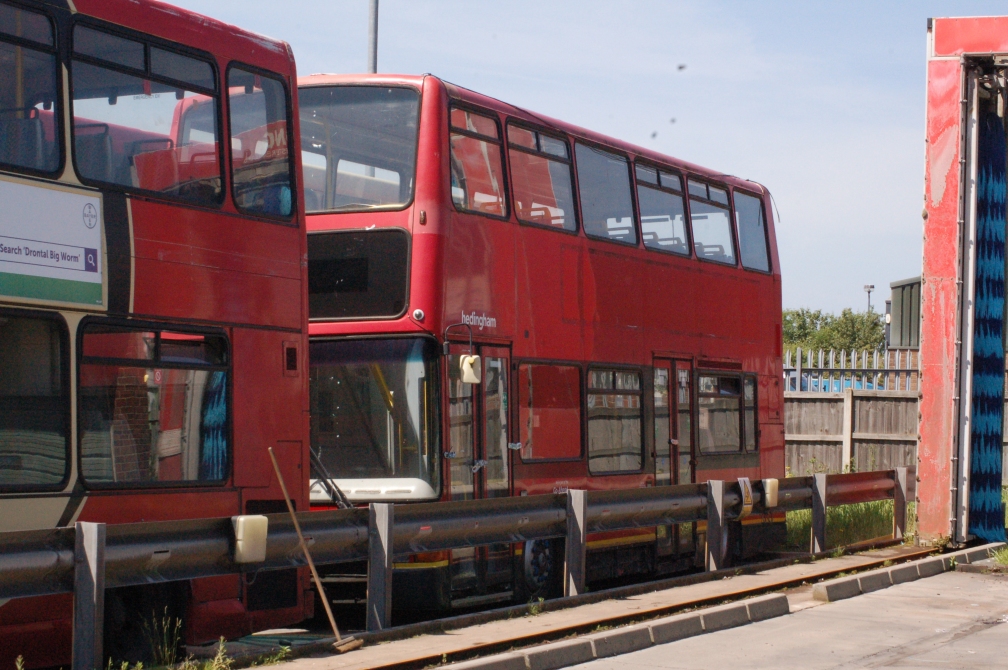 (John Podgorski).
Volvo B7TL/Plaxton President 582 (X507 EGK) has returned to CN depot, ex static use at Colne Community College, Brightlingsea. It was pictured (above) on 6/6/18. It is to be stripped for spares. 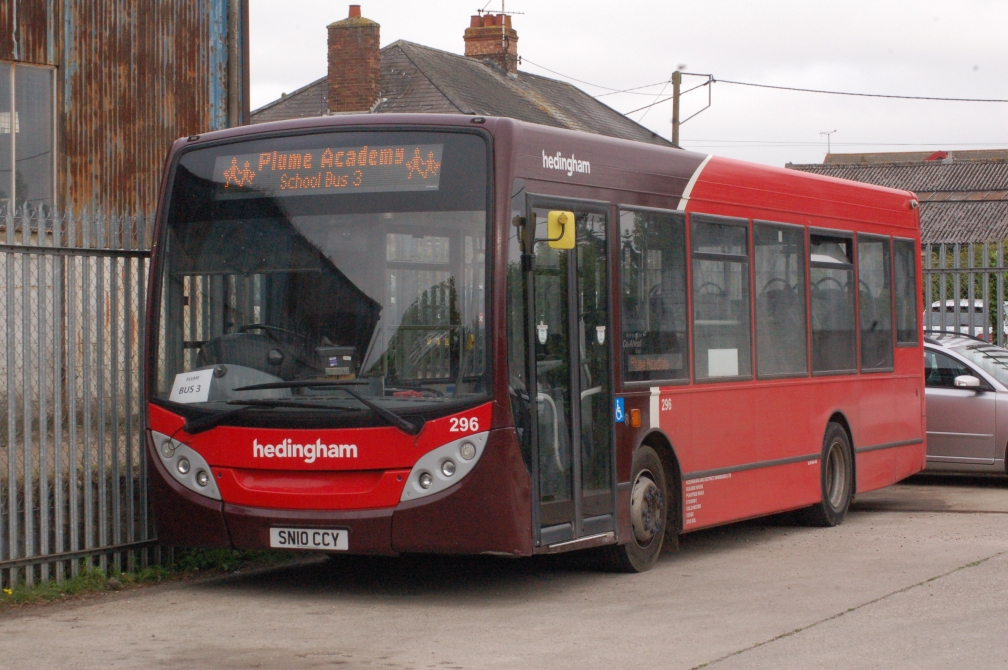 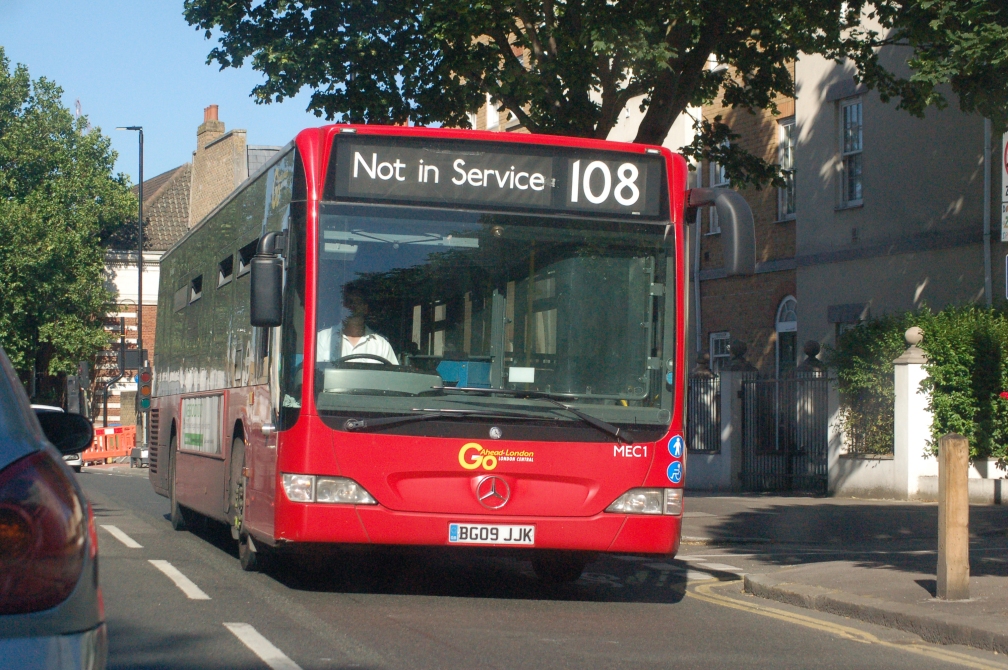 Above: Mercedes Citaro MEC1 runs light back to New Cross garage, along Trafalgar Road, Greenwich on 30/6/18. If it had been in service, it’s journey from Stratford to Lewisham would have taken it up Westcombe Hill and across Blackheath. (John Podgorski).

Above: 315804 brings up the rear of a morning departure from London Liverpool Street on 15/6/18; with 315810 leading. The first of the new Class 710 EMUs from Bombardier have now been completed; replacing the venerable ‘315s from later in 2018. Note the temporary Speed Restriction (TSR) signs, due to a points failure earlier in that week. (John Podgorski).

METROLINE.
From 3/6/18, TfL491 (Waltham Cross-North Middlesex Hospital) was gained from London General North, and is run from Potters Bar (PB).
From 23/6/18, TfL30 (Marble Arch-Hackney Wick) came from Tower Transit. This takes Metroline buses deep into east London. It is run from Kings Cross (KC) depot. Alterations have been made to make this location accessible to double deckers.
TfL214 (Parliament Hill Fields-Finsbury Square) was moved from KC to Holloway (HT) to make space for the new contract.

Above: Metroline has had two depots at Kings Cross. The original one (coded KX) is pictured here in April 2004. This was on the site of the original Kings Cross railway station (the buildings can be seen in the background) and was opened as an outstation of Holloway (HT) for the then new TfL390 (Archway-Marble Arch) service, on 29th March 2003. Originally RML Routemasters were used M to Sat only.  Kings Cross became 24/7 from 3/9/04 when OPO and a night service were introduced, along with sole responsibility for TfL390. It subsequently moved to a new, purpose built site further up York Way (at Freight Way and recoded KC) on 10th July 2010. TfL390 moved to Holloway, with KC gaining TfL214 (Paliament Hill Fields-Liverpool Street) – once with Thamesway, and more recently TfL46 and 274. This was because saloons could only access KC, due to a headroom restriction. Stansted Citylink Coaches also worked from the latter location during 2015 to 2017. (John Podgorski).

Below: KX depot in September 2003, with Channel Tunnel Rail Link (CTRL) works in the background. Also note the coach parked in the yard. (John Podgorski). 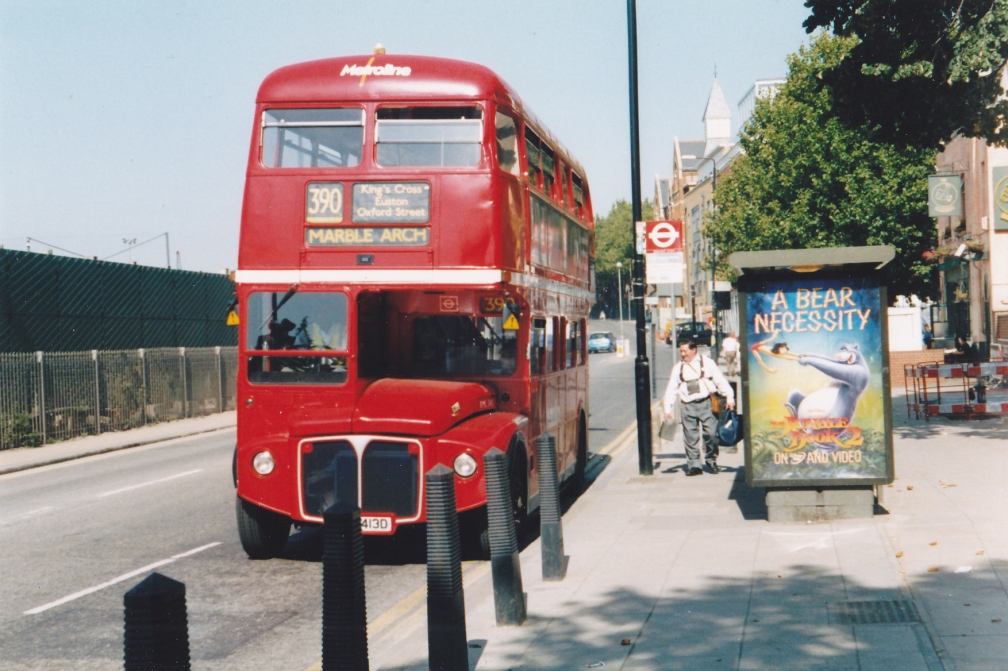 Above: Metroline ex MTL London Northern Dennis Dart/EL ENL119 on a northbound TfL214 at Goods Way in September 2003. 214 used to be worked by Thamesway from Ponders End, (between 1992 and 2002). Step entrance buses were still in use on TfL contracts in 2003. Upon sale, several buses from this batch passed to Essex operators. (John Podgorski). 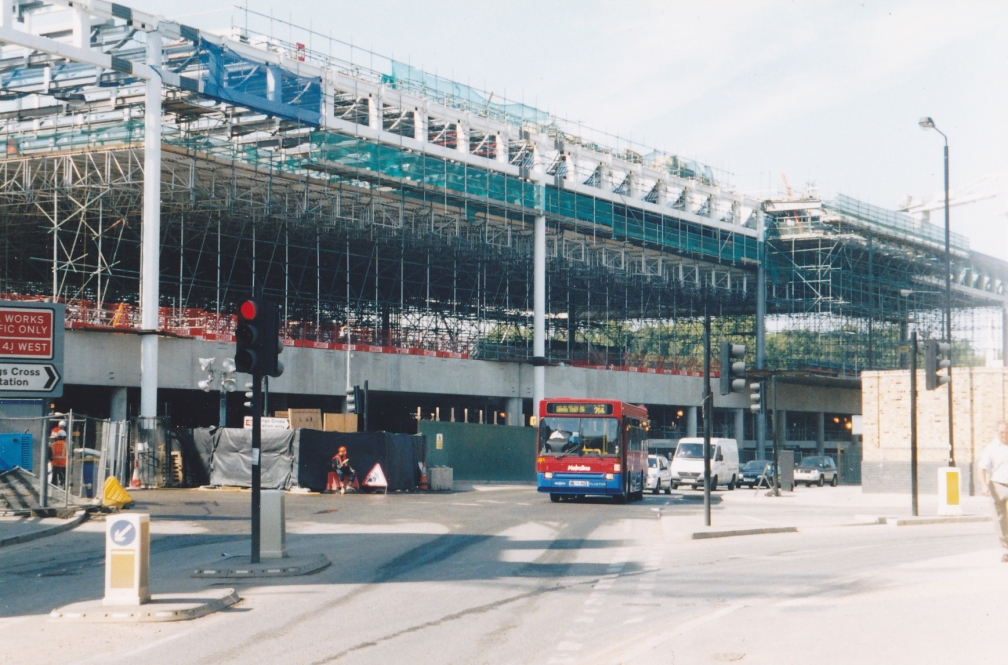 PANTHER TRAVEL.
Volvo Olympian/Alexander RH R941 YOV, has gone to Takeley Metals for scrap. It had been disused for a long time and become a source of spare parts.
Witham outstation has moved to inside the MC Truck and Bus compound at Swanvale Industrial Estate. 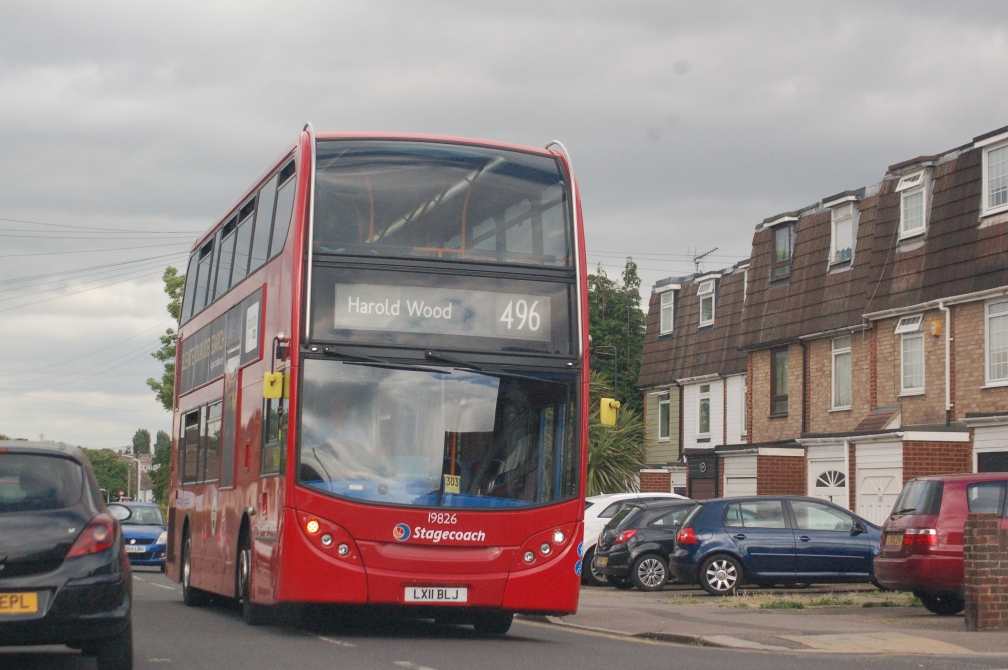 Above: TfL contract losses have enabled Scania Omnicities to be redeployed onto other routes, to replace Tridents. TfL174 is one such route, and 15014 was seen at Heathway, Dagenham on 30/6/18. (John Podgorski).

STEPHENSONS OF ESSEX.
Acquired is Mb Sprinter/EVM 301 (RE66 VPD), ex The Rural Development Trust, Lanark.
Scania Omnilink/EL Esteem YN06 JXS is ex Metrobus, via Ensign. It is for spare parts only.

Another minibus acquisition is CU07 KRW, a VW Crafter 16 seater painted silver. Pictured (above) on Ipswich Road, Colchester on 25/6/18, by John Podgorski. 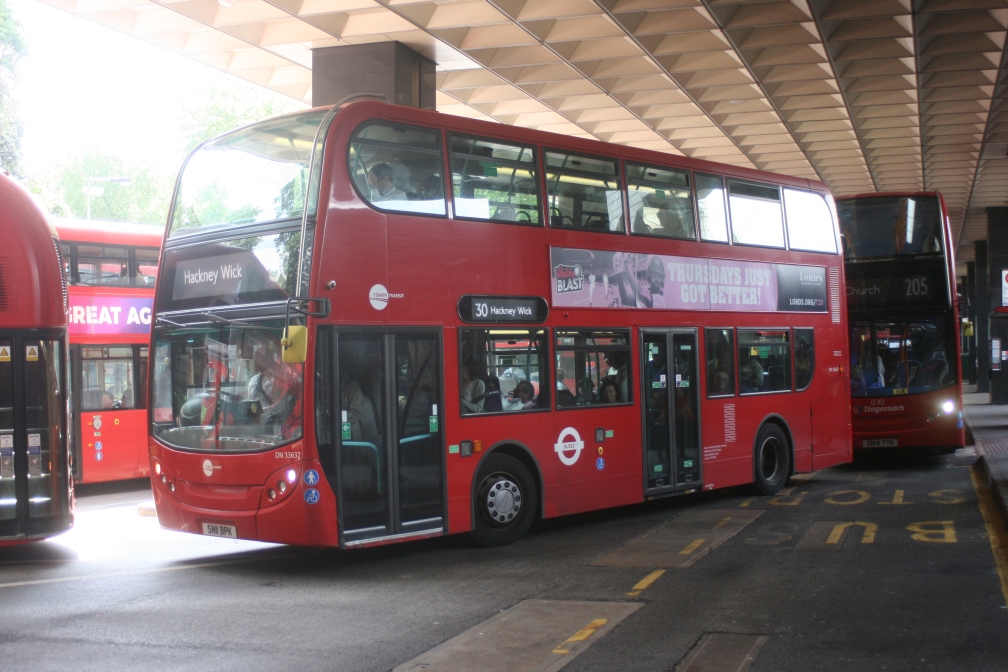 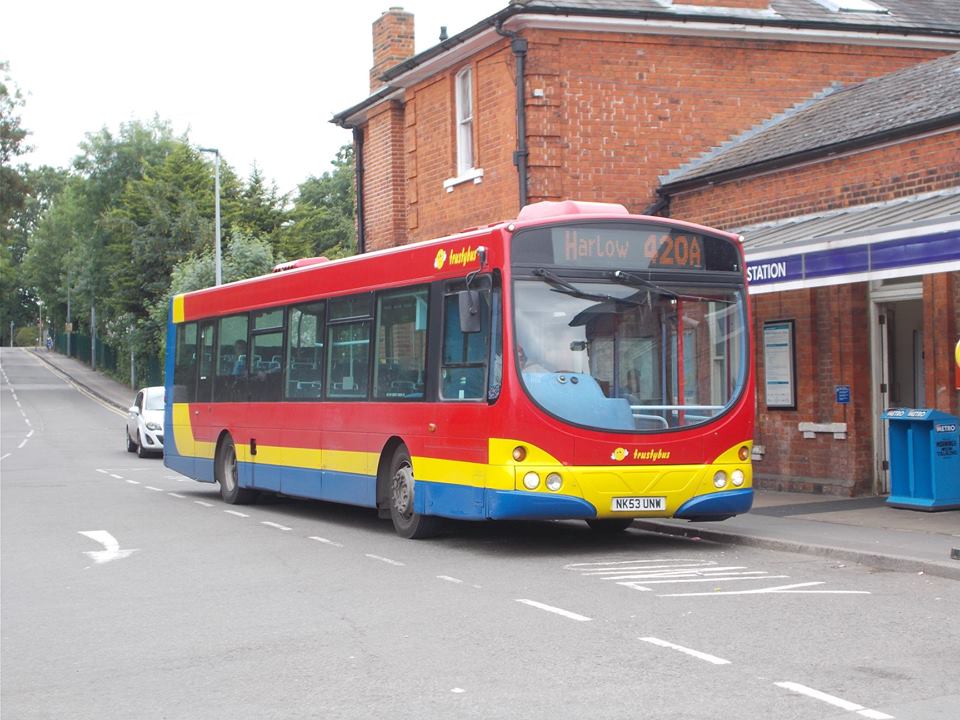 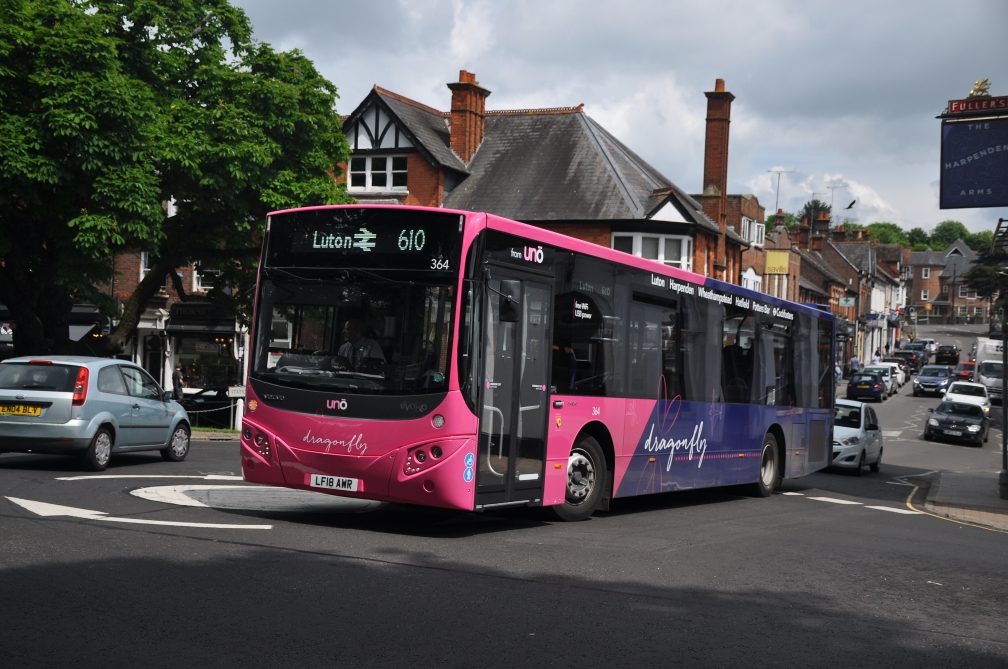