Welcome to the May 2018 edition of Busmopolitan.
The Colchester Park and Ride had a major revamp at the start of May, with increased hours of operation and more stops.
Meanwhile, it was announced by First that they would be closing their depot at Clacton and outstation at Braintree at the end of July. Hedingham has been a winner here, as it is taking on virtually all the local routes around Clacton, plus an Essex CC evening contract previously with First Braintree. Hedingham also started a new service in Clacton from 26th May – and the Chambers network underwent major revisions in the following week.
Stephensons commemorated two of its key employees – who passed away recently – in a ceremony at a local museum on 2nd May. More details below.

ARRIVA KENT THAMESIDE (COLCHESTER).
From 6/5/18, the Colchester Park and Ride was revised to operate longer, between 0530 and 2100. And there are additional stops – at North Station and Middleborough.

On 25/5/18, Dennis Dart SLF/Plaxton Pointer SN03 WMP was borrowed from Hire Your Transport (Rochford outstation) and used on schools service 888 (Laindon-Brentwood). This was because Blueline’s regular Volvo B7TL/Plaxton President V427 MOA was under repair at MC Truck & Bus (Volvo agent), Witham. Also, Blueline’s regular subcontractor Marc1 Travel of Billericay did not have a vehicle available. SN03 WMP is pictured (above) at Laindon, Telephone Exchange. (James Sadd). 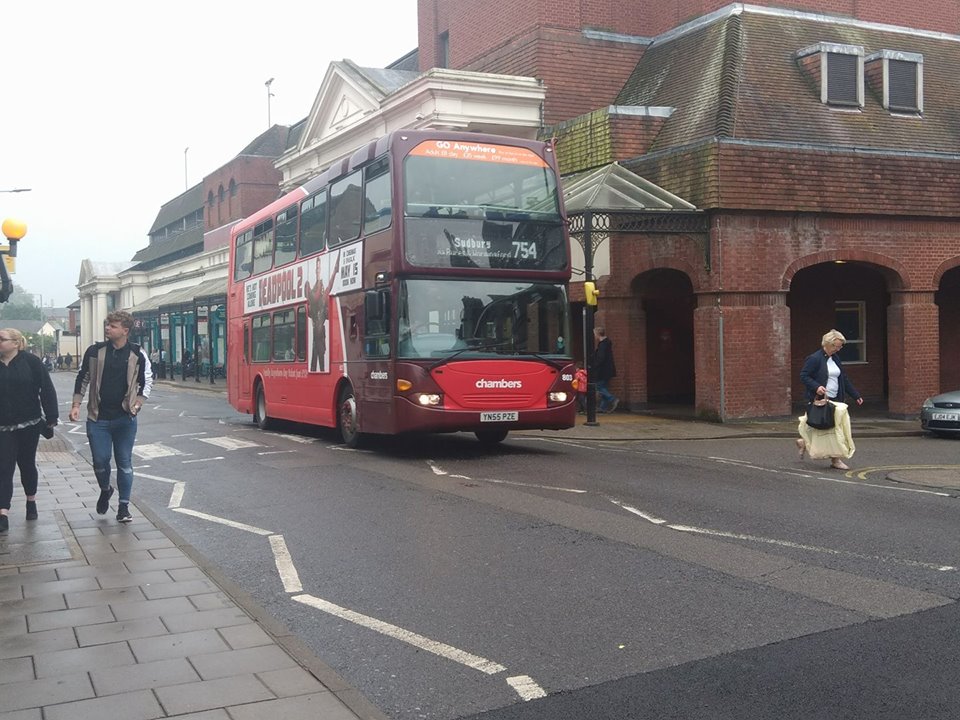 Above: Typical of the traction on the 6L44 Oxwellmains-West Thurrock cement train is 60095. It was seen at St James’ Bridge, Doncaster on 3/5/18. The 6L44 is normally routed along the Midland Main Line. (John Podgorski).

Above: In dreadful weather Turbostar DMU 170398 hurries through Manea, deep in the Cambridgeshire Fens, on a Birmingham New Street-Stansted Airport working on 12/5/18. Note the still operational semaphore signal. (John Podgorski).

ENSIGNBUS.
Temporary additions are ex Metrobus Scania Omnidekkas YN53 RYB/V/W, for rail work. This was e-rail on GTR associated with problems with the new timetable.
Route 12 (Aveley “The Village-Ockendon Station) ceased after 25/5/18.
From 29/5/18, new service 32 (Aveley-Ockendon-Grays) started. It is limited stop and runs M-F peak hours only. It replaces route 12.
Also from 29/5/18, X21 (Lakeside-Ongar) was revised to run between Lakeside and Brentwood and had its daytime frequency increased. Likewise, X81 (Grays-Hutton) was also increased to run as Lakeside-Hutton off peak. Both X21 and X81 are M-F only.
AEC Regent III/Saubers RT4846 (NXP 971) has been converted into a “double” of pre-war RT8 (FXT 183) for film work. 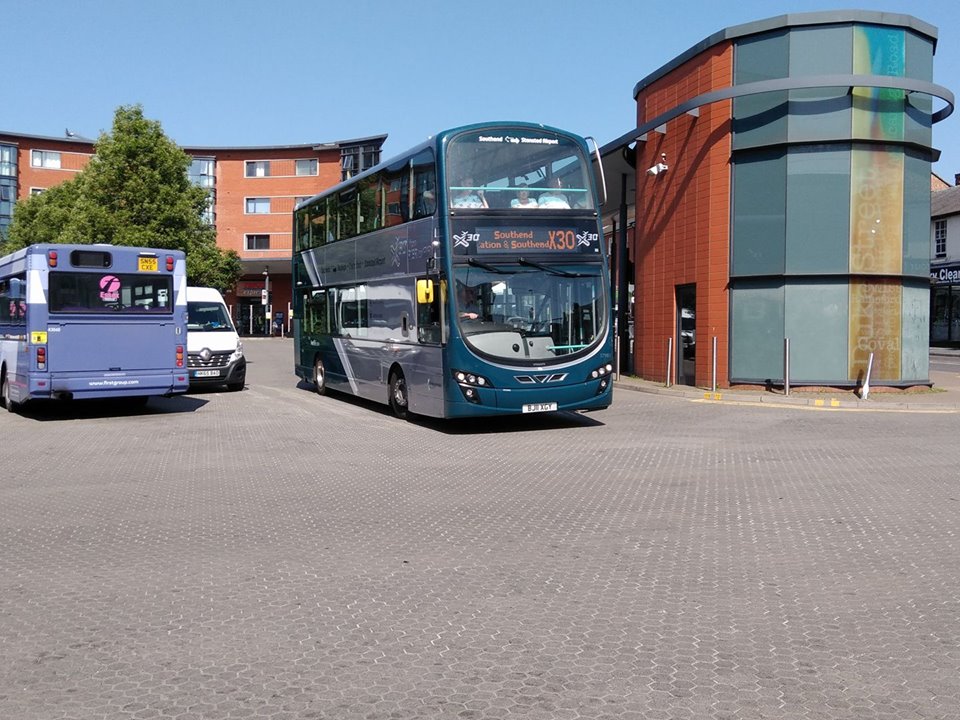 Above; One of the former First Berks/Green Line Volvo B9TL/Wright Gemini2s, 37985, departs Chelmsford on 8/5/18 – on a southbound X30. X30 is now diverted away from Duke Street railway bridge, due the appearance of double deckers. (Simon Austin).

Above: Another relatively unusual working is of a Scania L94UB/Wright Solar on 62A. 65678 heads down The Avenue, Wivenhoe on 9/5/18. The 62s are normally double deck. (Simon Austin).

At the old Harwich depot (closed June 2015), the ‘For Sale’ signs have been removed.
There is now a caravan in the side yard.
The old Colchester garage on Queen Street has a “Notice of Possession” affixed to the front door. Colchester Borough Council has appointed the County Court for this. It is due to problems with trespass, vagrancy and vandalism.

FIRST LONDON.
The one time depot at Ponders End (PD) has disappeared under new industrial units. This was originally with Eastern National and then Thamesway.

Above: The new railway station at Meridian Waters (Edmonton) is taking shape, and will replace Angel Road. Picture taken on 19/5/18. (John Podgorski).

Above: At Northumberland Park, the third track was being laid on 19/5/18. (John Podgorski).

Above: One time Anglia Railways DBSO 9703, now with Network Rail, at Kings Cross, London on 3/5/18. It is on a test train, operated by Colas on behalf of NR. Colas gained this contract from DBS in 2015. (John Podgorski).

A new commercial service started in Clacton from 26/5/18. Route 1 (Pier Avenue-St Osyth Beach). It runs M-Sat, including bank holidays on a 60 minute frequency in the daytime only, and will do so until September. Its predecessors were summer only services 19 and before that 100. These had been largely run by First and Eastern National, although the now ceased Colchester Coaches was a provider in the early 2000s.
HY2 (Kelvedon-Feering-Coggeshall Honywood School) ceased after 25/5/18. It will be replaced by a revised HY1 from Silver End after half term.

Above: Dennis Trident/Alexander ALX400 LH738 at Feering on 20/2/18; returning to Kelvedon off a morning HY2. (John Podgorski)

HIRE YOUR TRANSPORT.
During May, Volvo B10M/Plaxton Excalibur T215 UCH was at Rochford outstation. It was later replaced by Dennis Dart SLF/Plaxton Pointer SN03 WMP, and at the end of the month, Volvo B12M/Plaxton Paragon AO02 RBZ. The two former returned to the main base at Tadworth, Surrey. SN03 WMP was also loaned to Blueline, Rochford on 25/5/18.

JOHNS TOURS, STOWMARKET.
Founder John Cresswell passed away on 30/5/18, aged 77. He passed his PSV test in 1961, with Mulleys of Ixworth, and subsequently worked for Mulleys subsidiary Combs of Stowmarket, than later Squirrells of Hitcham – before establishing Johns Tours in 1990. John retired in 2013, with his son taking over the business.

ADL/Enviro 20Ds SEN13-19 (YX11 FYS-W/Y/Z) have left Northumberland Park, following the loss of TfL299 (Muswell Hill-Cockfosters) to Sullivans. They have initially gone to Hants and Dorset Trim at Waterlooville for refurbishment, and will then be posted to London General at Morden Wharf. SEN10, meanwhile, has come from London General.

LONDON OVERGROUND.
The first of the new Class 710 EMUs have been outshopped from Bombardier at Derby. 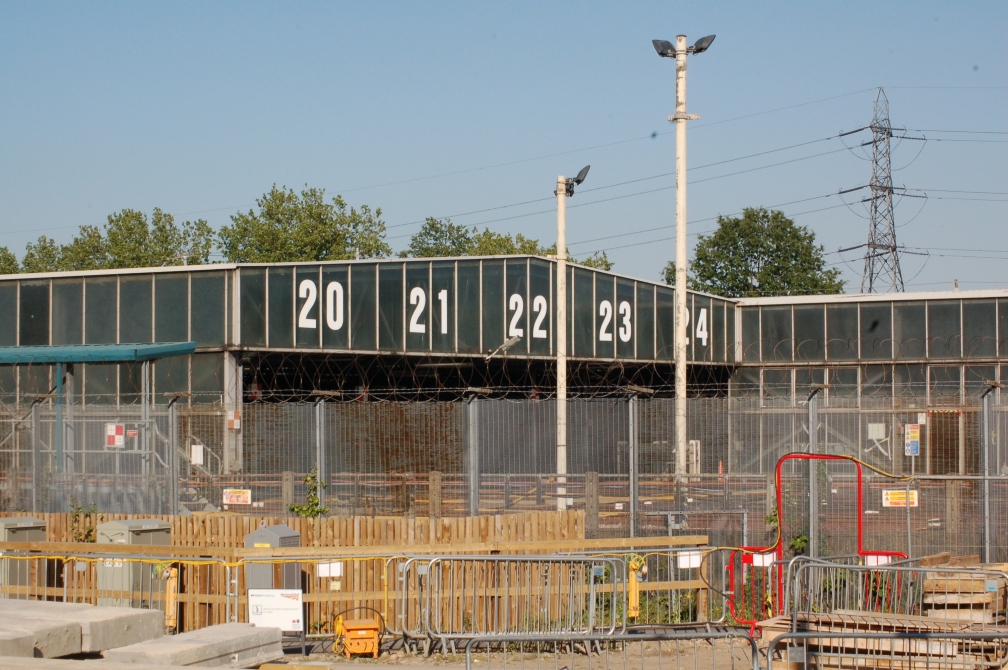 Above: The portal of the Central Line tunnels south of Newbury Park, on 28/5/18. The strip of land in the middle is the trackbed of the former link to Ilford, which was a relic of the LNER but lasted into British Railways days. (John Podgorski).

MTR TfL RAIL.
New Aventra EMU deliveries have reached 345042.
345021/25 are at Abbey Wood for staff training.
A Paddington-Hayes service began from 20/5/18. 7 x 345s are allocated. This replaces some GWR workings. From the same date, the Heathrow Connect services and Class 360 EMUs were taken over. 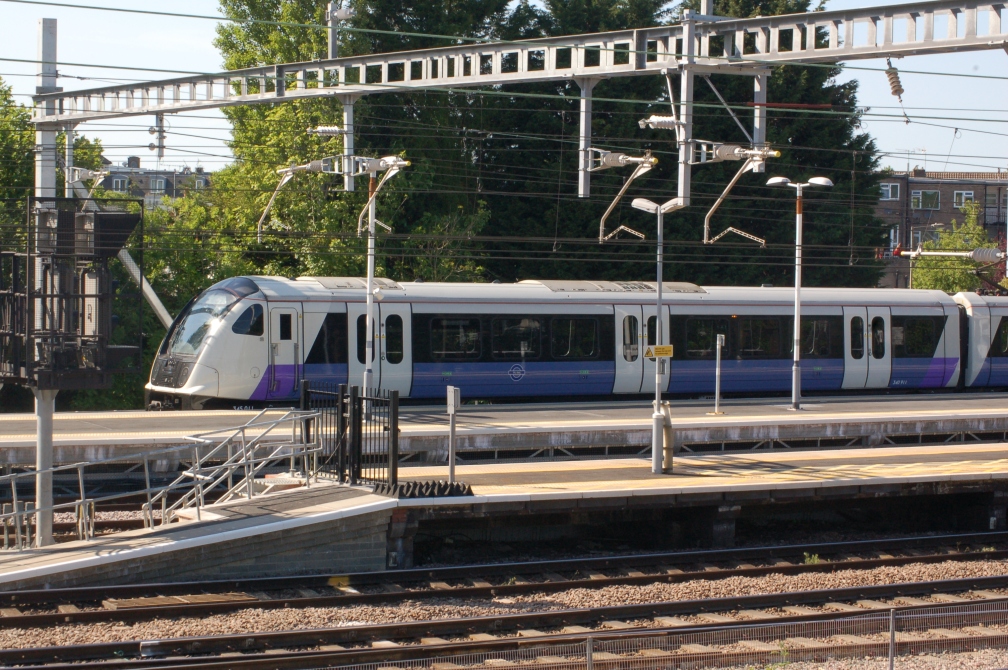 NATIONAL EXPRESS OPS.
Scania/Levante BK14 LFX has revised rear branding for ‘On the case at Stansted’, also advising that Kings Cross, Farringdon and South Hackney are now additionally served.
Scania/Levante tri-axle BD65 JFO has a super rear advert for Amazon Pay on NX.
The Kings Ferry was working on ‘A’ service duplicates over the Whitsun Bank Holiday weekend. 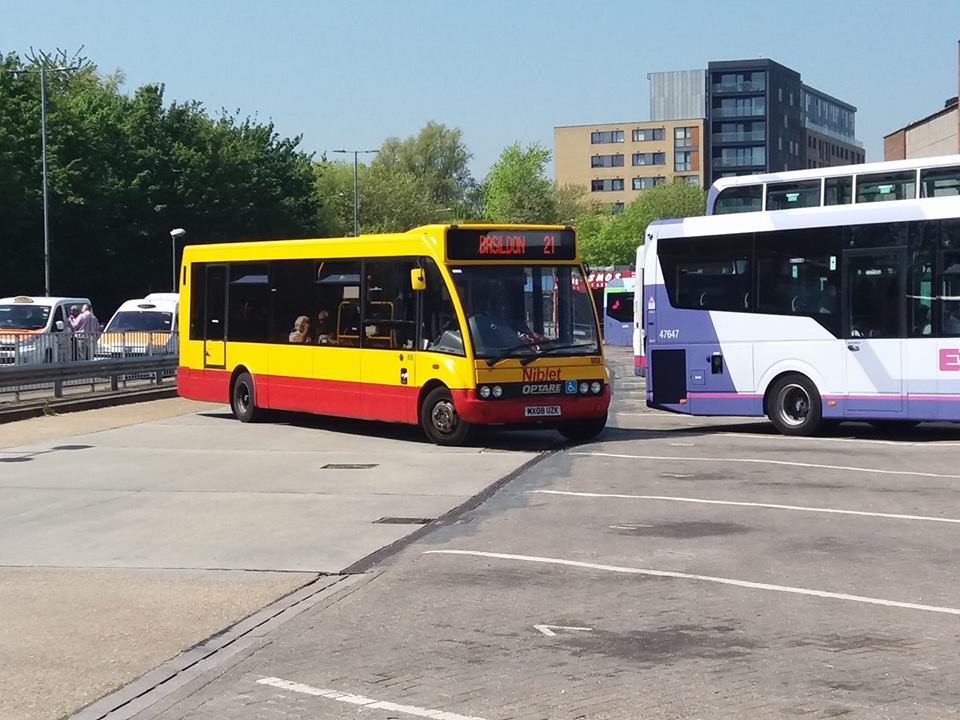 PRIMERA AIR.
Further transatlantic flights started from Stansted, serve Boston, Washington DC and Toronto. A total of 8 new Airbus A321NEOs have been bought for these services.

RAILWAY MISCELLANEOUS.
The headshunt at Griffin Wharf, Ipswich has been fenced off, in connection with a flood defence project on the adjacent River Orwell.
The site of the old goods yard at Maldon East has disappeared under a new ALDI supermarket.

REGAL BUSWAYS:
Neoplan Tourliner MX10 DFK is now with Hough of Oxford t/a M&M Staffing. It is for rail work. It has been re-registered MM10 BUS. The registered address of its new operator is given as Brighton, but the OC is in Essex, at an old Regal site. 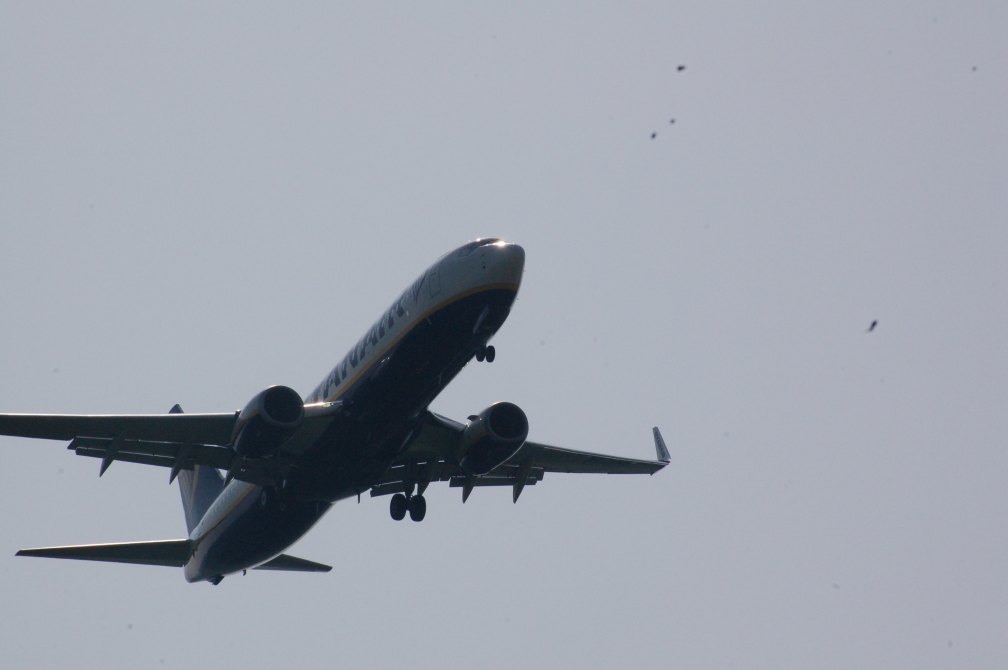 Car 21 has survived at the Lynn Tait Souvenir Emporium at Old Leigh for over 20 years, but the emporium has now closed. A sister, unrestored vehicle (8) exists at Mangapps Farm Museum, and their is another original car (22) at the Southend Pier Museum. These were the AC Cars built electric (3rd rail) vehicles which served between 1849 and 1978.

Above: Car 7 at the landward end of Southend Pier in its service days. No 1 signal box is to the left. (RMWeb.co.uk).

Below: Car 22 leads a journey to Southend Pier head. The railway was double tracked throughout at that time. (RMWeb.co.uk). 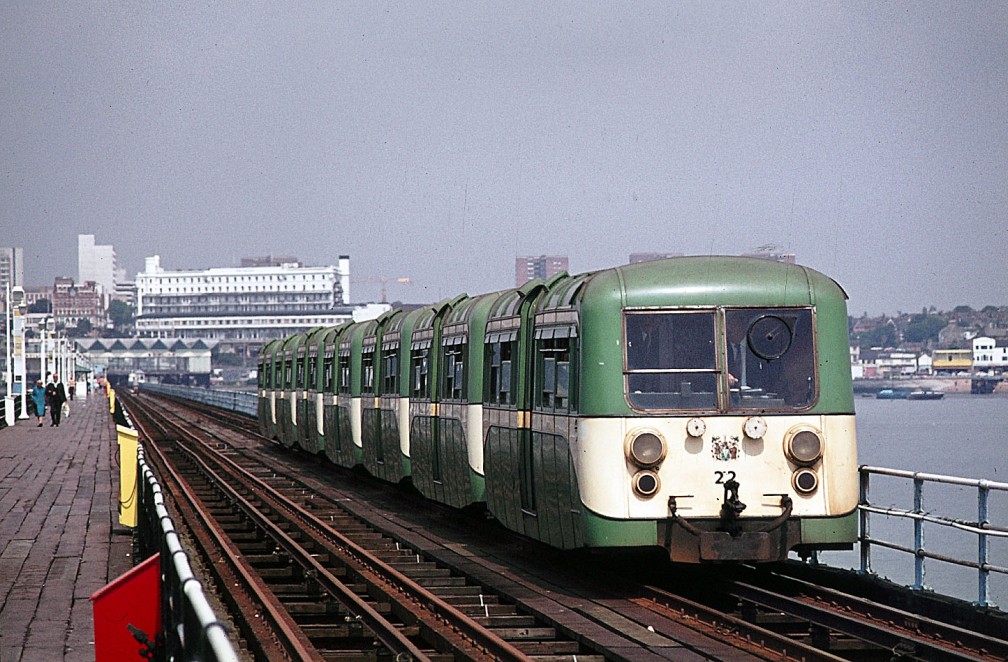 TfL474 (Canning Town-Manor Park) was gained from Go-Ahead Docklands Buses on 5/5/18.
Some Dennis Trident/Alexander ALX400s were reinstated at West Ham (WH) as a result. However, a visit to Romford and Ilford on 28/5/18, saw no Tridents about at all.