Welcome to the April 2015 edition of Busmopolitan.

The Colchester Park and Ride opened on Monday, 13th April. Centred on Cuckoo Farm, at Junction 28 with the A12 trunk road to the north of the town; the £5.9 million project was completed in around 3 months. The service runs Monday to Saturday 0700 to 1900, and operates non stop to the town centre, where it follows the clockwise one way loop, serving stops at High Street – outside the town hall, and Head Street. Colchester has had a rather chequered history regarding park and ride. Back in 1971/1972, a “full time” Christmas scheme was tried, from a site on the garrison and worked by the then Colchester Borough Transport. It attracted custom, to the point that is was continued (on Saturdays only) beyond the festive period, but then petered out by the February. C B T repeated the Christmas P and R on the four Saturdays leading up to 25th December 1973. Then from 13th December 1975 a Park and Ride was established at North Station, running to/from the town centre. Operating on Saturdays only (once again by Colchester BT) on a 6 month Essex County Council sponsored trial, it was poorly used; to the extent that the local media published an article featuring a P and R bus, with the caption, “is the driver the loneliest person in town ?”. Not surprisingly, this experiment wasn’t pursued after its expiry on 6th March 1976, and it was not until 1995 that another Monday to Saturday schedule was tried, running between two sites either side of the town centre, these being car parks at Sheepen Road (to the north) and Butt Road (to the south). Hedingham Omnibuses was the contractor (on behalf of Colchester Borough Council), and the service number C2 was allocated . Once again, this was not successful; one theory being that the termini were within walking distance of central Colchester anyway. This scheme was subsequently revised to run from Butt Road only. Then in 1999, Eastern took over operation; but the C2 was reduced to Saturdays only. Eastern National had already been operating a Saturday only Borough Council sponsored Park an Ride since 1993; between North Station and the town. This was eventually numbered C3. The C2 ceased in 2002, but the C3 continued until 2007. This only stopped when the railway company began charging for car park use at weekends, and a suitable alternative site could not be found. This left Colchester with no park and ride again.

APT, RAYLEIGH.
Volvo B10M/Berkhof Axial APT 42S, has been re-registered back to its original R917 ULA. 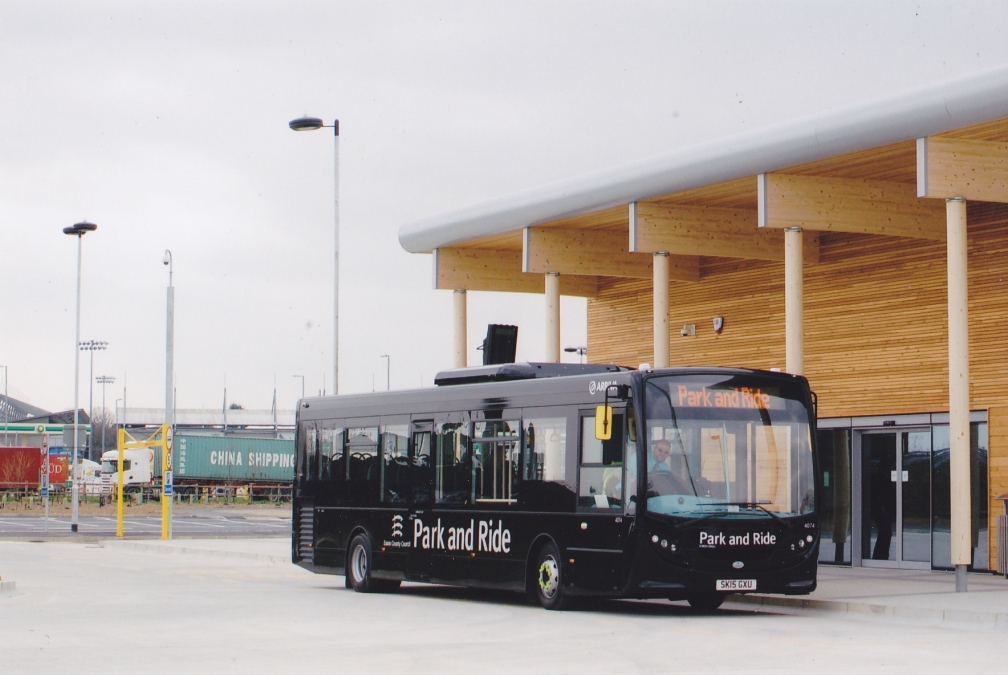 The Colchester Park and Ride commenced operation on 13/4/2015.
The new ADL/Enviro 20Ds for this service are 4071-5 (SK15 GXR/S/T/U/V). They are in black/silver livery, like the First P and R buses in Chelmsford. 4074 was pictured (above), at Cuckoo Farm on the first day. The Colchester buses also sport ‘Arriva’ fleet names.
Dart SLF/Super Pointer 3701 (S701 VKM) has returned to Harlow from Colchester, off loan. SLF/Pointer 3281 (T281 JKM) has come from Southend – on loan.
From 5/4/15, there were changes to Essex CC contracted Sunday/holiday services. 66 (Rowhedge-North Station) ceased to run “direct” into town down the Military Road “hill”, but was diverted through the new housing on Roberts Road (on the site of the Hyderabad Barracks), to continue via Mersea Road). The 102 (Colchester-Harwich) has its Colchester terminus altered from Osborne Street to Stanwell Street.
Mercedes Sprinter service van MF04 DNJ has lost its TGM branding.

CRUSADER HOLIDAYS.
One coach from the Motts fleet usually stables at the old Crusader depot at Clacton. During April this was Setra S416 EU08 FAJ. 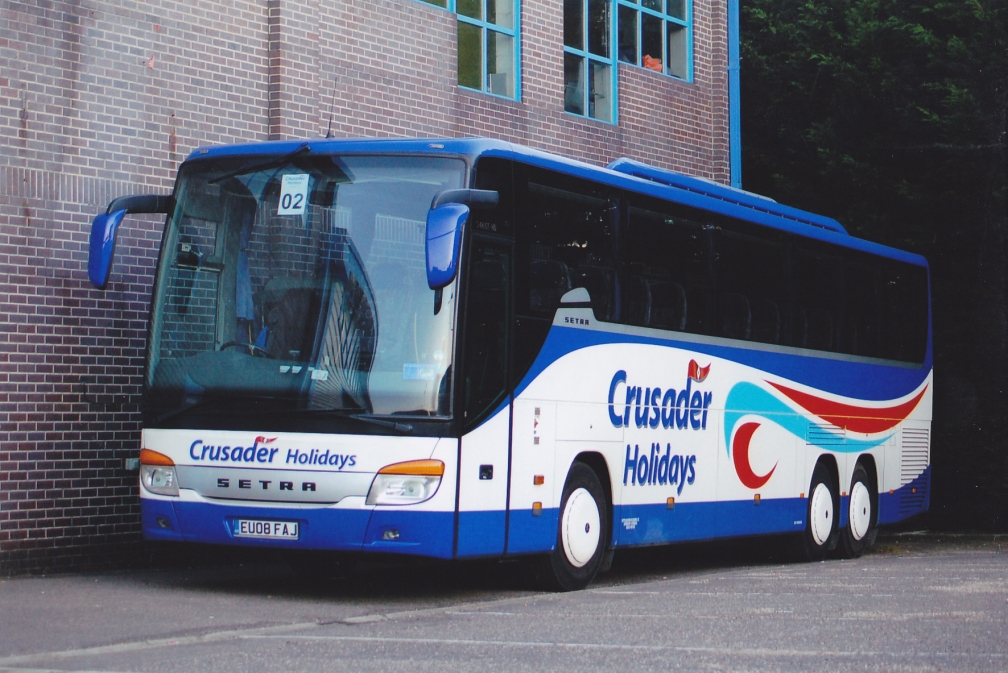 ENSIGNBUS.
A “new” open topper is ex Brighton and Hove Trident/EL T808 RFG. It was initially used on General Election campaigning by the Conservative party. Trident/ALX400 192 (T192 CLO), has gone on loan to Renown of Bexhill. Trident/ALX400 156 (LX04 FXR) is now WLT 916; 158 (LX04 FXT) is now WLT 428.
Alexander Royale bodied Volvo Olympian 827 (WLT 307) is withdrawn, leaving 829 (WJY 759) as the last of this type in the operational fleet. Tridents are no longer used on stage service; only private charters and rail now.
Acquired as part of a “job lot” from the now defunct Western Greyhound is former Southend Corporation/Southend Borough Transport Leyland Titan PD3/EL MHJ 347F.  Whether or not Ensign keeps it, its future is now secure. It requires restoration.
Also set aside for potential Heritage Fleet use is ex Western Greyhound ‘RMA’ Routemaster NMY 648E, while restored former Southdown Leyland Tiger PS/Harrington DUF 179 is now back in use.
Also for the Heritage fleet is former Southend Transport VH Astromega JEV 245Y, acquired from Fords of Althorne.
Temporary fleet Volvo B7TL/Plaxton President 913 (X653 LLX) has been sold to Redroute of Northfleet. Short term operated Optare Solo 985 (WK11 APV) is now with Pickford of Chippenham.
The 24th edition of the Ensign ‘Thurrock Area Bus Times’ booklet was issued from 13/4/15. This coincided with minor enhancements to routes 22 (Aveley-Grays), 25 (Lakeside-Wiliam Edwards School – schooldays only), 33 (Lakeside-Chafford Hundred-Grays), 44 (Lakeside-Purfleet-Grays) and 73 9Lakeside-Tilbury). On Saturdays, the frequency of the 44 has been increased to half hourly.
A new Vauxhall Vivaro engineers’ van is EY15 DVO.
Ford Transit minibus HK59 AZO has been converted into an engineers’ van, with its rear and side windows blacked out.

ESSEX COUNTY COUNCIL – COMMUNITY LINK.
There have been some changes to operating centres in north east Essex.
Now ceased are The Old Rectory at Brook Street, and Marylands at Colchester and the coach park at Clacton Common Shopping Village. The welfare buses at the latter have moved to the far side of the Shopping Village car park/Kennedy Way in Clacton, and the former to Peddars Close, Shrub End in Colchester.

The former Dagenham depot at Chequers Lane is now a distribution centre for on line grocery specialist Ocado.
Picture taken on 12/4/15.

The Colchester travel shop and crew facilities have moved from Queen Street, to the bottom of Queen Street; into premises previously used by Arriva Colchester. Queen Street depot is now only used for bus maintenance and parking.

FIZZ TOURS.
Volvo B10M/VH RUI 6607 was in withdrawn condition at the Clacton OC in April.

FLAVIN, STANFORD LE HOPE.
This is the new title for coaches previously operated under the Bobby’s Minibuses/Chariots of Essex/Priory of Essex fleet names. Livery is white/blue, which follows that of the erstwhile Priory vehicles.
Arrivals are of VH Bodied Volvo B10Ms L975 OWY – from Down of Mary Tavy, Devon, and L56 REW – ex Fraser and Golding of Rufford, Lancashire.

Van Hool Astromega double deck integral coach Y245 JEV has passed to Ensign – for preservation. It was one of a batch new to Southend Transport.

FREIGHTLINER.
Has been sold by its current owners, Arcapita, to USA based Genesee and Wyoming (G and W). G and W now has majority shareholding, with the existing Freightliner management retaining 5% of the shares.
The Dagenham Dock operation has ceased; with the end of the scrap traffic to Cardiff. The sidings have been lifted. The picture below shows the site in February 2010. 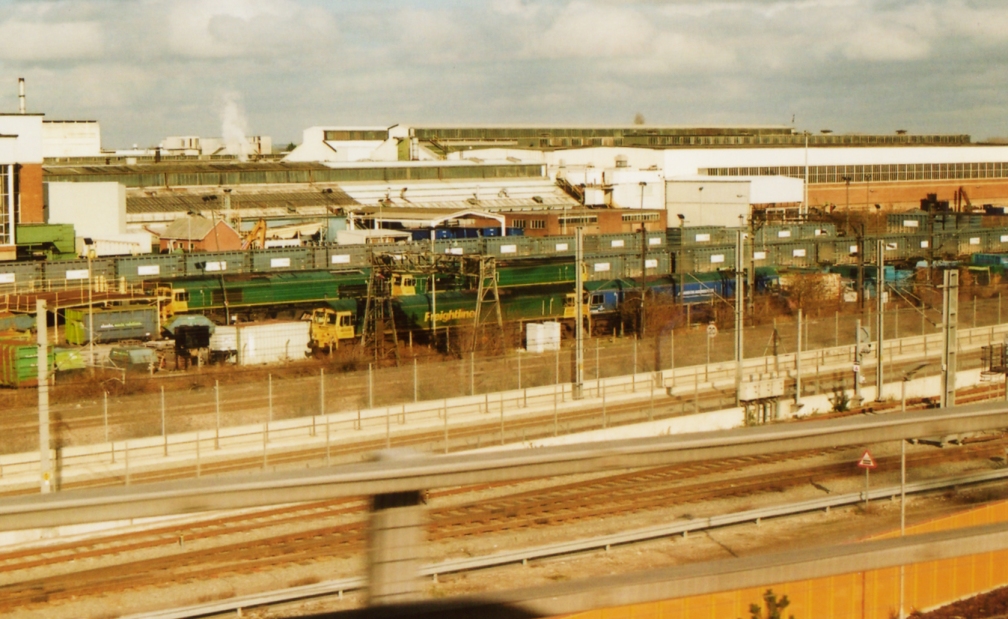 GORIDE.
Mercedes Sprinter/UVG KE04 PUH has come to Essex, from the Oxfordshire fleet.

IPSWICH BUSES.
On loan in early April was Mercedes Benz demonstrator BP14 FJZ.
A subsequent history is of AEC Regent 65 (DPV 65D) , which is now Masons Tea Bus at Ten Mile Bank, Norfolk. It has previously been at Quantock Motor Services in Somerset.

JONES (BUS 4 u), BRAINTREE.
From CT Plus is BMC YJ59 HLX. It is normally used on the Stansted Hilton Shuttle.

KEANE OF LINFORD.
Has ex Metroline Volvo B7TL/Plaxton President LK51 XGG, via Ensign. It has been converted to single door, but retains London style roller blinds. 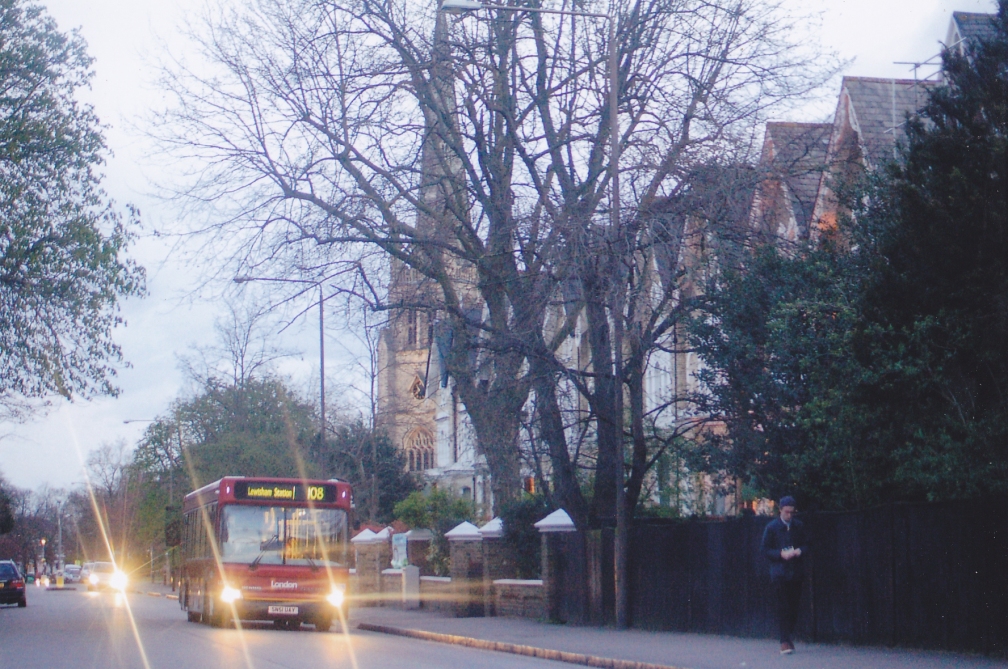 Above: Dusk is falling on 12/4/15, as Dart SLF/Plaxton Pointer LDP209 heads through Westcombe Park, on a southbound 108 working.
The Victorian grandeur of this section of the Stratford to Lewisham route contrasts starkly with the gritty urbanness it encounters north of the River Thames. 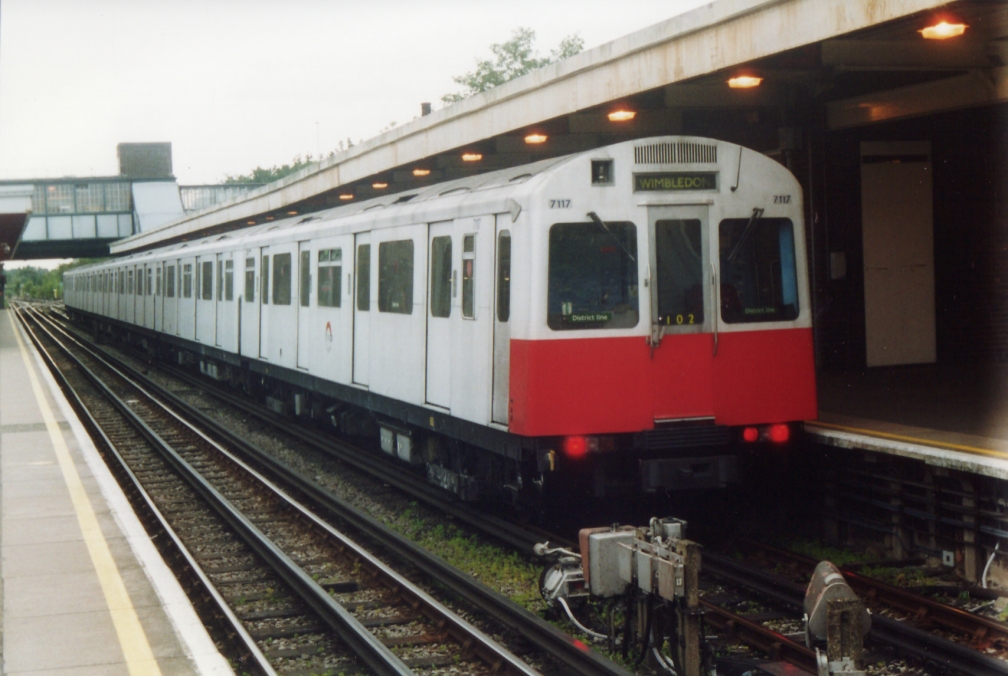 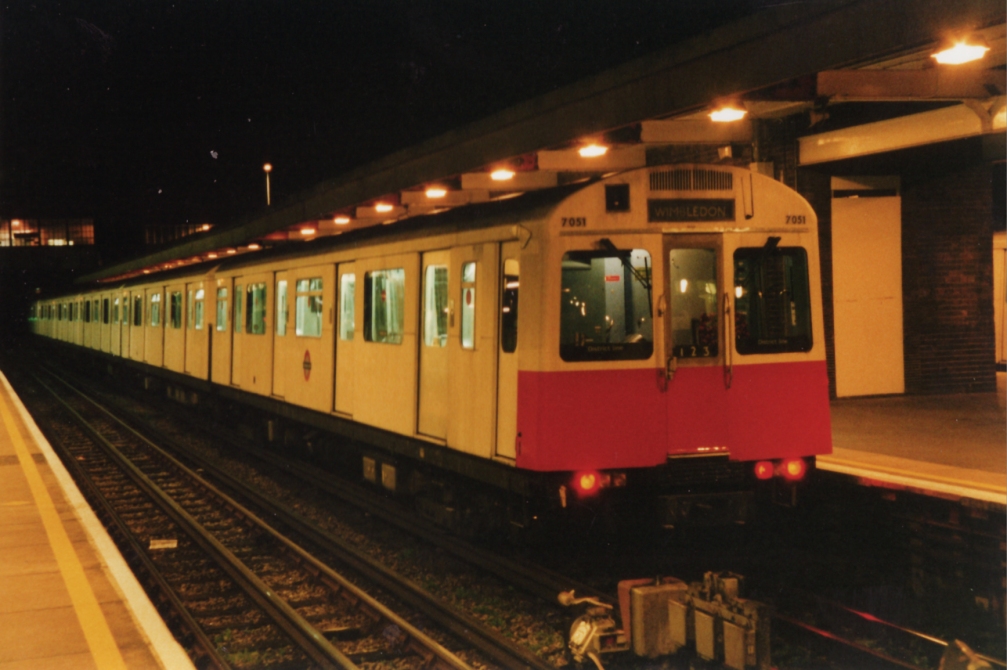 NEW HORIZON.
Dennis Dart SLF/Super Pointer Y661 NLO is now Reserve, after a brief spell back in service. It is parked up at the rear of Frating depot. After having been used on the Stena Line shuttle at Harwich International Port, SLF/Super Pointers Y152 NLK and Y663 NLO appeared on stage work at the end of April. They have been replaced at Harwich by Volvo B6BLE/Wrights.
Withdrawn Toyota Optima P960 DNR and cannibalised Dart SLF/Super Pointer RX51 FNS have gone from Ardleigh site; leaving withdrawn Volvo B10M/Jonckherre Deauville K908 RGE still there.
The former Elmstead Market depot is now a used car lot – Elmstead Car Sales. 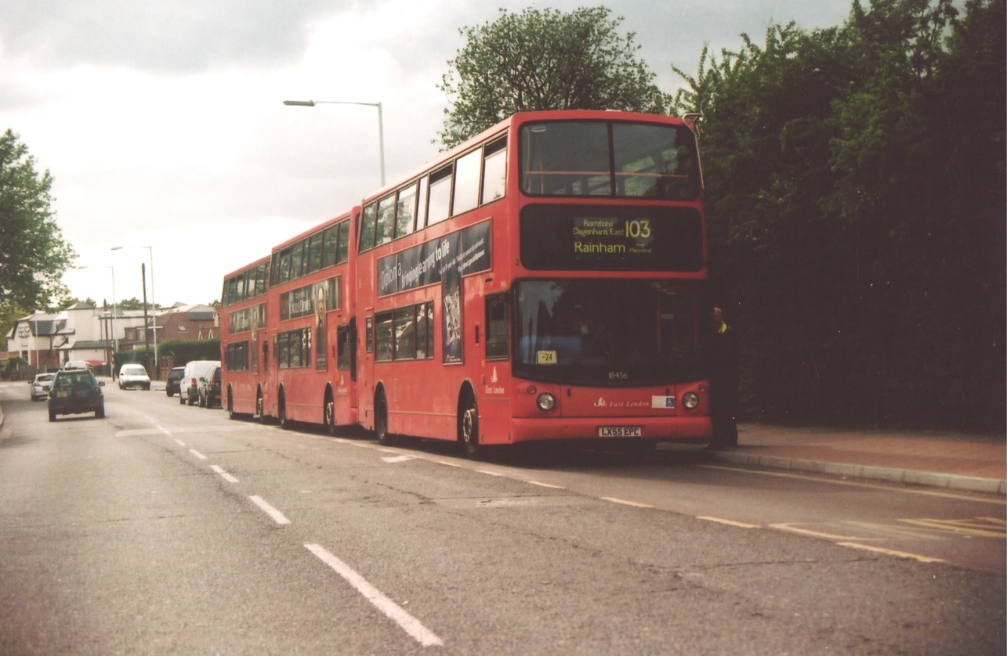 Above: Trident 18456 at Chase Cross, the northern terminus of 103 in May 2009. At this time, ELBG owned East London, rather than Stagecoach. 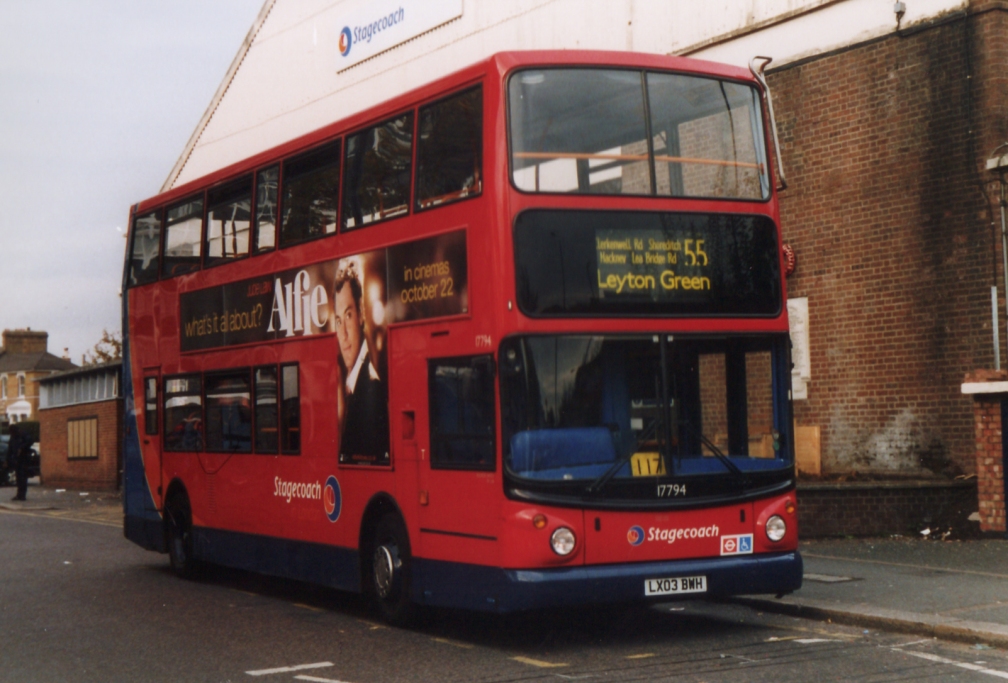 Above: Trident 17794, pictured outside Leyton garage in October 2004; has now been donated to a local school (see below).

STEPHENSONS.
Leyland Olympian/NC 947 (H547 VAT) has been reinstated and allocated to Haverhill. Also now at Haverhill are Leyland Olympian/Alexander RL 724 (J624 GCR) and NC-Leyland Olympians 862/3 (J562/3 HAT), plus Volvo Olympian/Alexander RHs 827/9 (N827/81 FKK). All of these came from the Essex fleet. 862 has been working from Great Dunmow outstation.
From 1/4/15, became the operator of council contracted service 18 (Newport-Haverhill); taken over from Freedom Travel.
Acquired in a dealer capacity are ex Nottingham City Transport Scania Omnidekkas YN53 CFA/P/U/V/X/Y.

TRUSTYBUS, HARLOW
Acquired via Ensign, is ex Western Greyhound/Velvet Dart SLF/Pointer KX51 UDG, which is in allover pink and has been dubbed the ‘Pepper Pig bus’ ! SLF/Super Pointer SPD9 (NFZ 6606) has gone to Lawrenson of Preston  for scrap – via Ensign – after recovery of its seats. This bus was new to Stagecoach West as W501 VDD.  The same purchaser took SLF SNZ 7296.

WARD’S OF ALRESFORD.
Founder/proprietor Edgar “Eddie” Ward has passed away, after an illness. He was in his late sixties. The company was established in Southgate, London in 1969 and moved to Essex 10 years later.