Welcome to the February 2016 edition of Busmopolitan.

On 7/2/16, a former Metroline Dennis Trident/Plaxton President, was “blown up” on (a specially closed) Lambeth Bridge in London, as a stunt for the Jackie Chan film ‘Foreigner’. Lack of communication by the production company, meant not enough information was in circulation to prevent alarm and distress to some parties.

Extreme weather on Monday 8th February caused headaches for bus providers around Thurrock; due to closure of the Dartford Bridge. More details in the Ensignbus section.

Townlink of Harlow ceased operations after service on Friday 26th February, 2016; as its Operators Licence was revoked from that midnight. Its routes have passed to other operators.

And the Crossrail route has been given a formal title; after a certain monarch.

Above: Dennis Dart SLF/Plaxton Pointer no 3293 at Harlow Bus Station on 20/2/16.
This came from Arriva Kent Thameside , having been new to Dartford, for London work, but latterly at Gillingham

COLCHESTER BUS STATION.
The western side of the old building has been repainted black. Pictured below, on 17/2/16. 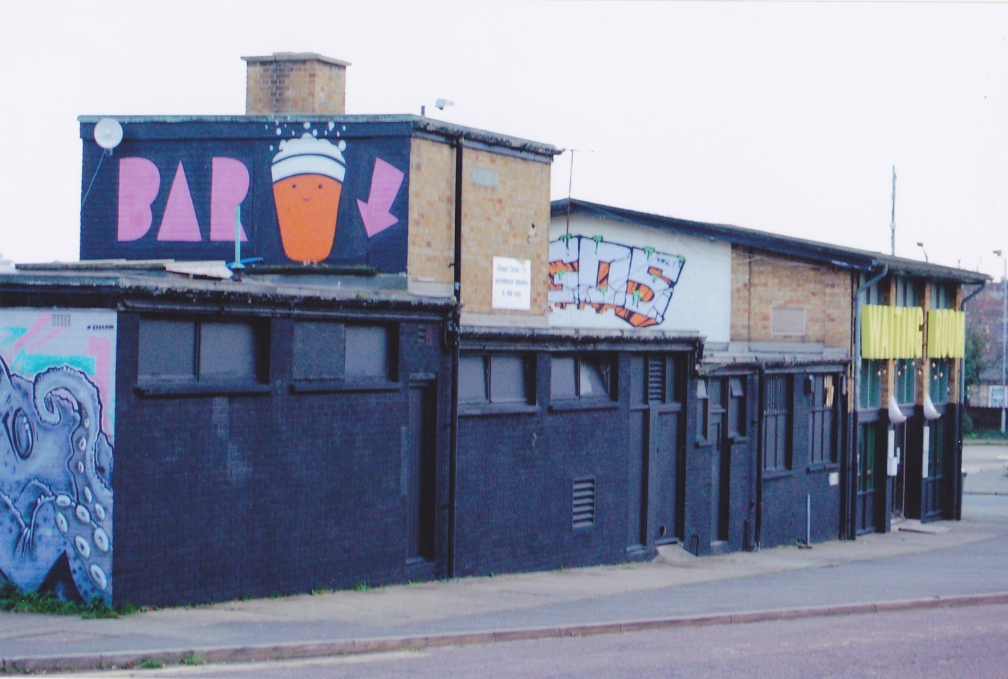 COLCHESTER SOS BUS.
Leyland Lynx G126 HNP, and its ex mobile library Iveco Ford Cargo colleague, are now kept at the old First Queen Street bus depot in central Colchester; rather than the Gosbecks Road council depot on the southern outskirts. It was seen, below on 17/2/16.

CROSSRAIL.
Is to be officially named ‘The Elizabeth Line’.
This was announced by London Mayor Boris Johnson on 23/2/16, during a visit by HM Queen Elizabeth II, to the construction site at Bond Street.
An electrification depot has been set up on land previously occupied by sidings, between Chadwell Heath and Goodmayes.

CRUSADER HOLIDAYS.
The old Clacton, Stephenson Road depot, is now used as a workshop by Veolia, for Tendring District Council vehicles. The existing Veolia site (around the corner) at Fowler Road, remains in use. Crusader continues to outbase a coach there, and it is business as usual at the travel agency office.

DBS.
Class 59 diesel electric loco 59004 has donned Aggregate Industries livery. This and 59001 have received ’30 YEARS CLASS 59′ plaques. The ’59s work into the ‘Busmopolitan’ area, to Dagenham Dock and Purfleet.
Class 66 diesel electric locomotive 66048; withdrawn following an accident in 2010 – has passed to Booth, Rotherham (dealer). It had been repainted overall black before sale.

DOCKLANDS BUSES.
Ex London Central ADL/Enviro 40Ds E165/7/75/9 are now here.
A new depot at Barking is in the pipeline.

ENSIGNBUS.
On 8/2/16, there was severe disruption across the Thurrock network, due to closure of the Dartford Bridge, as a result of high winds. Reports suggest the area was “gridlocked” for up to 11 hours, and Ensign believed it could have lost up to £10K in revenue. Service X80 (Chafford Hundred-Bluewater) was suspended, while 22 (Aveley-Grays); 33 (Lakeside-Chafford Hundred-Grays); 44 (Lakeside-Purfleet-Grays); 66 (Lakeside-Tilbury-Chadwell St Mary); 73 (Lakeside-Tilbury); 83 (Lakeside-Chadwell St Mary) and 88 (Grays-Stifford Clays-Lakeside) all experienced long delays, turning short and cancellations. 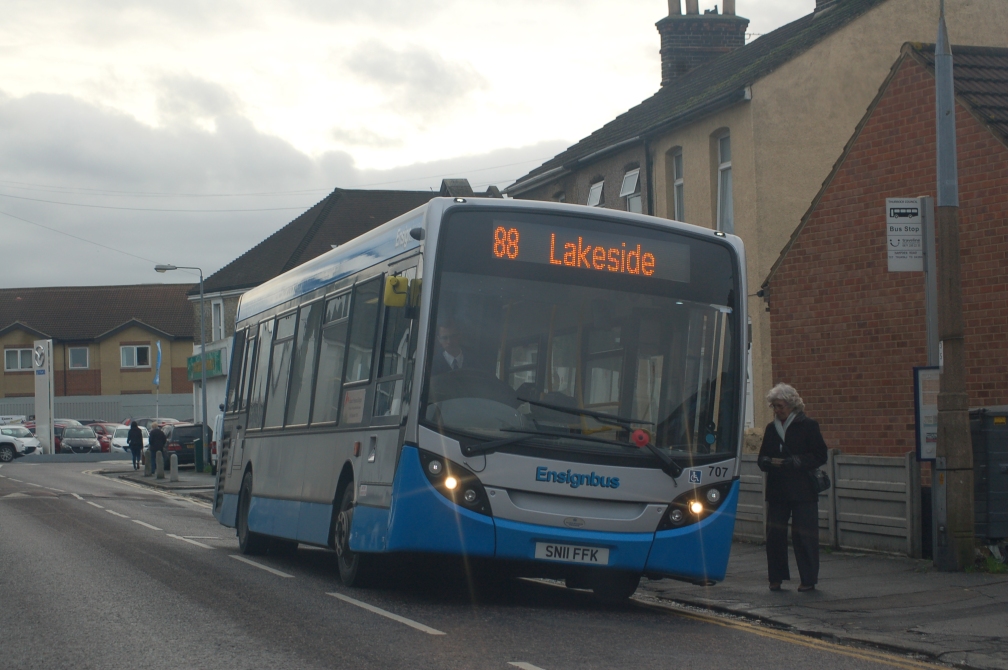 EOS LONDON.
Another ex Metroline Dennis Trident/Plaxton President via Ensign is LK03 CEU.
It is pictured, below at Shenfield on TfL rail replacement, on 20/2/16.

Scania L94UB/Wright Solar 741 (YN51 MKZ) has been withdrawn due to accident damage, and sold to Ensign (dealer). It was quickly resold to Howard of Great Sankey in Cheshire, for repair. 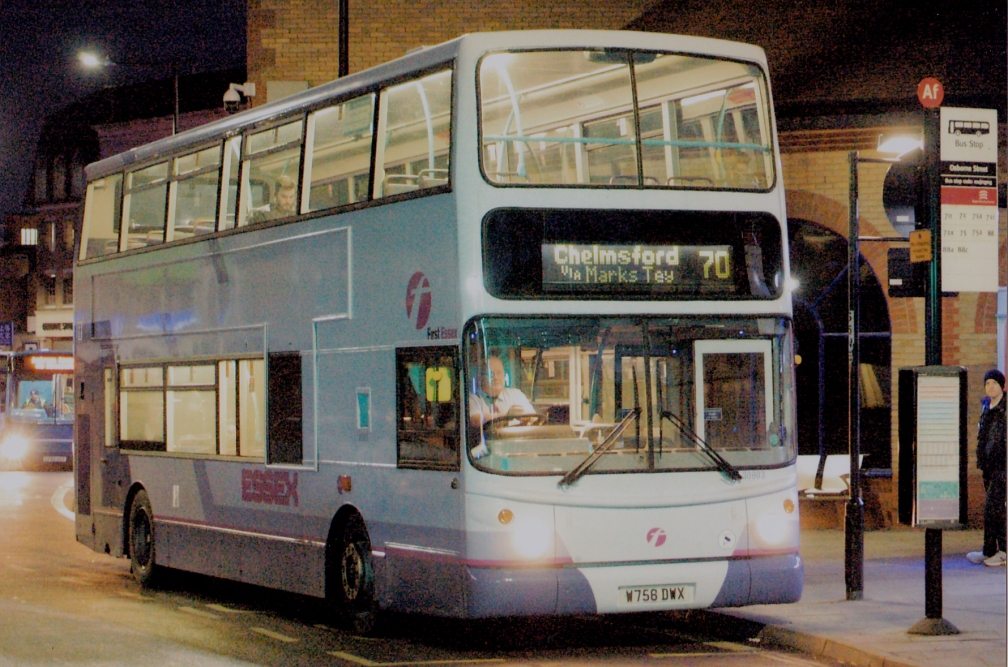 FLAGFINDERS, BRAINTREE AND HALSTEAD.
The Bova Futuras have been re-registered. RY04 ERN is now GB04 FLG, while KC55 ABC has become GB55 FLG. The latter is seen (below), on Abellio Greater Anglia rail replacement, at Ingatestone on 21/2/16. 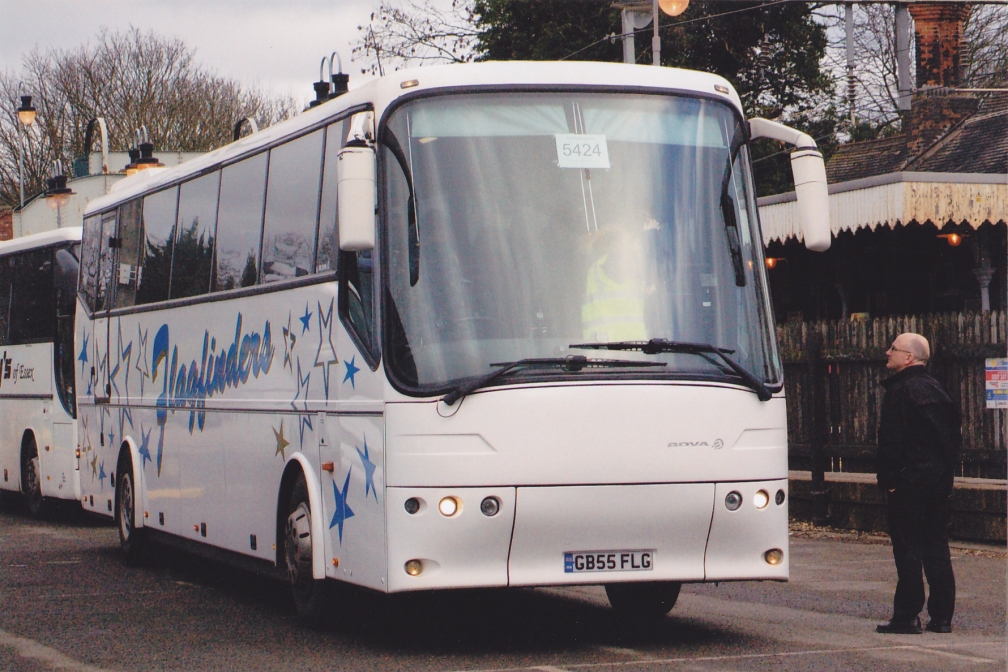 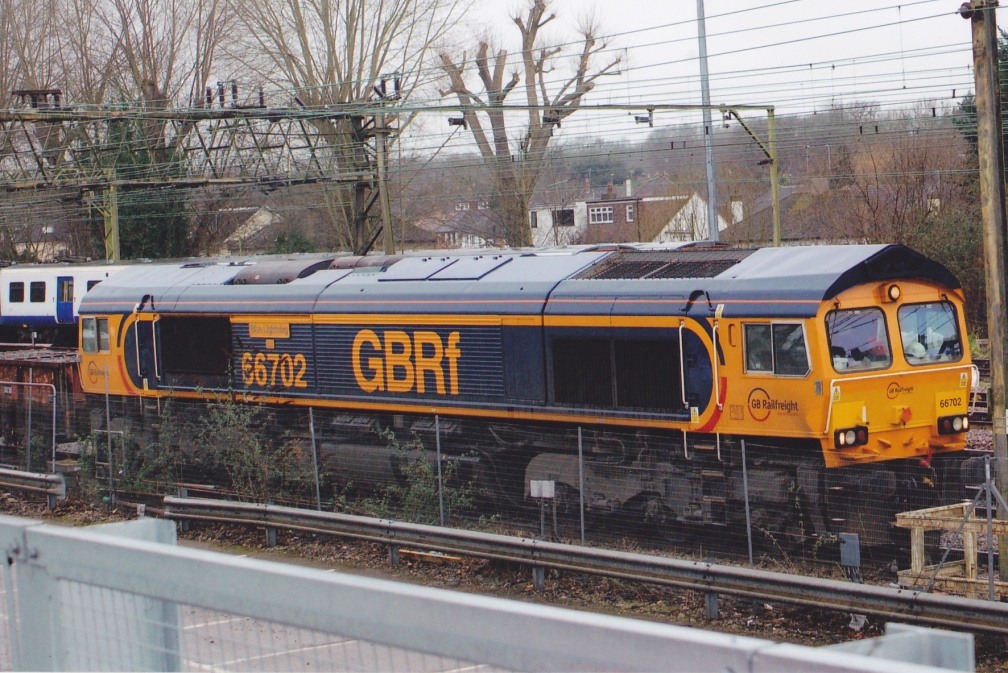 Above: Withdrawn Volvo Olympian no 69 at Kelvedon, in December 2015.

JACKSONS OF BICKNACRE.
Scania K114/Irizar MJI 5031 has been offered for sale.

Neoplan Starliner YN03 AWH is now here. It was seen, above, on AGA rail replacement at Ingatestone on 21/2/16.
This coach was new to West Yorkshire operator Hargreaves of Hebden, subsequently with Solus of Tamworth; but was acquired from Peyton Travel of Brynna, Mid Glamorgan, Wales, with whom it had been registered SIL 7486.

KEANE TRAVEL.
Has moved from Muckingford, to the old AVRO 77 depot at Orsett.

KELLYS, NAZEING.
Ford Transit SWB van Y597 YGC is in use as a crew ferry. It is lettered for Kelly’s property maintenance business.

KINGS TOURS, STANWAY.
Cherished registration mark KC56 ABC is owned, but currently not on any of the coach fleet.

LODGE, HIGH EASTER.
On loan from Scania, has been Irizar i6 YT65 BYX.
Dennis Trident/EL Lolyne T273 BPR in now YAZ 8827.
Volvo Olympian/Alexander Royale N593 BRH has been sold to Keeble of Leicester.
MAN14/EL bus FY52 PMU has passed to Semmence of Wymondham, Norfolk. Sister FY52 PMV is now with Gordon Springate Transport Training, of Detling Kent – and has been re-registered G15 SPR. 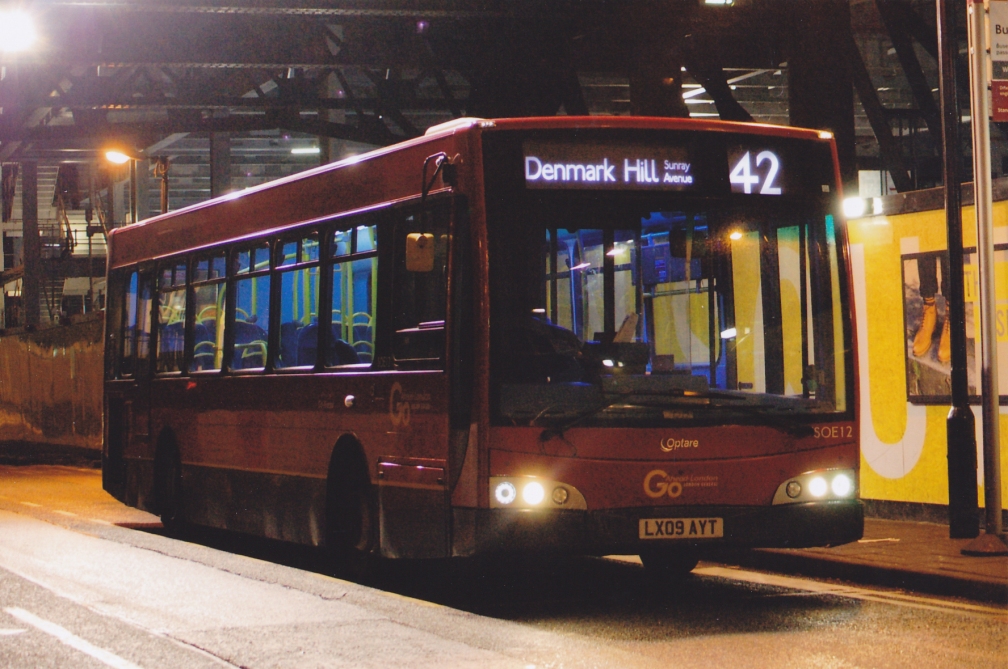 Above; A more unusual interloper on the 42 was Wright Cadet Hybrid WHY9, also pictured at Liverpool Street on 19th February. This is the temporary terminus at Worship Street, while the bus station is redeveloped in connection with Crossrail.

NATIONAL EXPRESS (CONTRACTORS).
New for Selwyns of Runcorn is Scania K410EB/Caetano Levante BD65 JFA; for NX 350 (Liverpool-Southend) and NX 370 (Runcorn-Clacton), amongst other work.

PANTHER TRAVEL.
A new outstation has been established at Silvertown, London for a Metropolitan Police (Safe Schools) contract. Regular vehicle is LEZ compliant all Leyland Olympian BIG 9249. This outbase is used as and when required.
Ford Transit 16 seater LN52 LFW has been re-registered DC52 PAN.
Offered for sale are Optare Solo VB08 PAN and Volvo B12B/Plaxton Panther DC04 PAN.
Ex Anglian/Hedingham Optare Solo YJ51 XSM; which had been acquired for spares only, has gone for scrap.

REGAL BUSWAYS.
On loan from South East Coaches of South Woodham Ferrers, were Setra S415 GRZ 2450 and DAF SB/VH GRZ 2451; and from Ensign, Dennis Dart SLF/Caetano KM51 BFO.
Dennis Trident/Plaxton President 1403 (V763 HBY) has gone for scrap, having been long term stored after engine failure. Sister 1404 (V764 HBY) has been withdrawn and cannibalised, with its engine going into Trident/ALX400 1302.
Sold is Dennis Dart/Alexander Dash 515 (P392 LPS). Previously sold Dart SLF/Plaxton Pointer 604 (R510 SJM) has ended up with MC Tractors, Ramsey, Cambs for scrap; via S&D Commercials, Upwell.
MAN NL270/Wright Solar 801 (RG09 BUS) is in the new livery, and back in service. It is pictured, below at Shenfield on Abellio Greater Anglia rail replacement on 20/2/16. 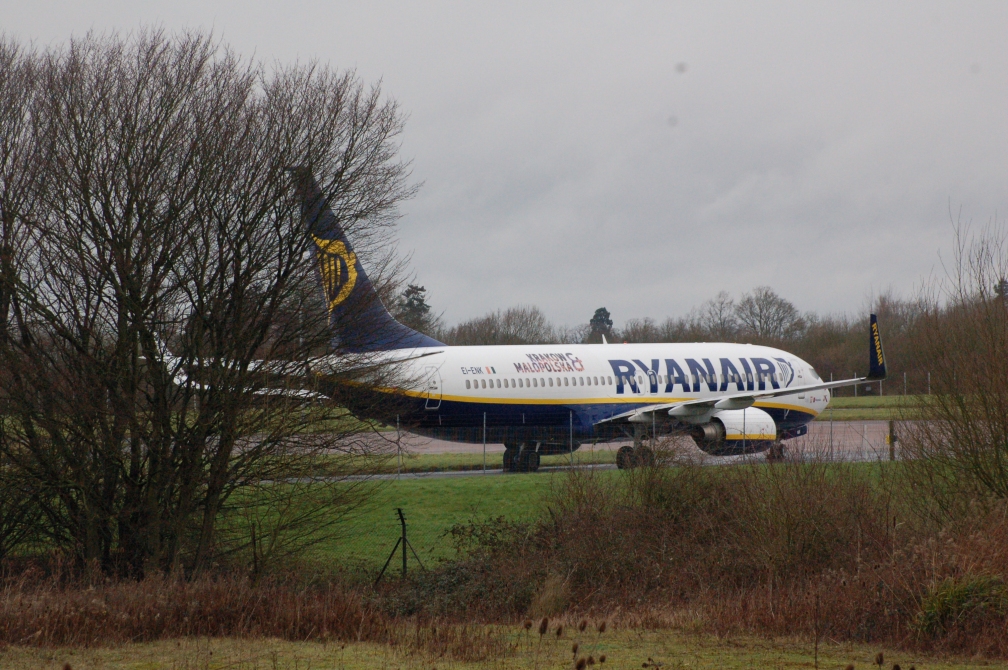 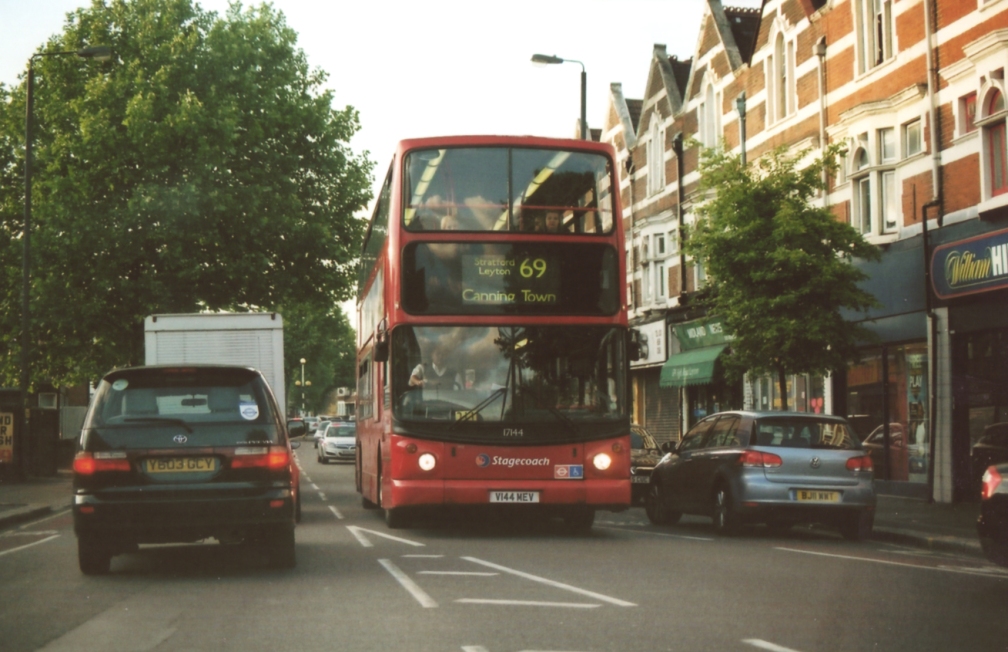 STEPHENSONS OF ESSEX.
An additional vehicle for the ‘Three Rivers’ network is long ADL/Enviro 200 476 (EU65 EOM).
Long ADL/Enviro 200 464 (EU62 FDF) was the route 247 bus for most of February; being replaced by sister 466 (DK57 OPZ) towards the end of the month.
Leyland Olympian/Alexander RH L953 MSC, now with a school at Maldon; has been moved to Mill Beach.

TOWER TRANSIT.
Took over TfL69 (Canning Town-Walthamstow) from Stagecoach East London, from 6/2/16; intitially using 19 Dennis Tridents borrowed from Stagecoach.
From 27/2/16, TfL26 (Hackney Wick-Waterloo)/N26 (Chingford-Trafalgar Square) were lost to CT Plus, with 20 ADL/Enviro 400s initially being loaned from Transit. In the final weeks of route 26 operation by Transit; Volvo B9TL/Wright Gemini2 VN36111 was observed at Bishopsgate on 19/2/16. 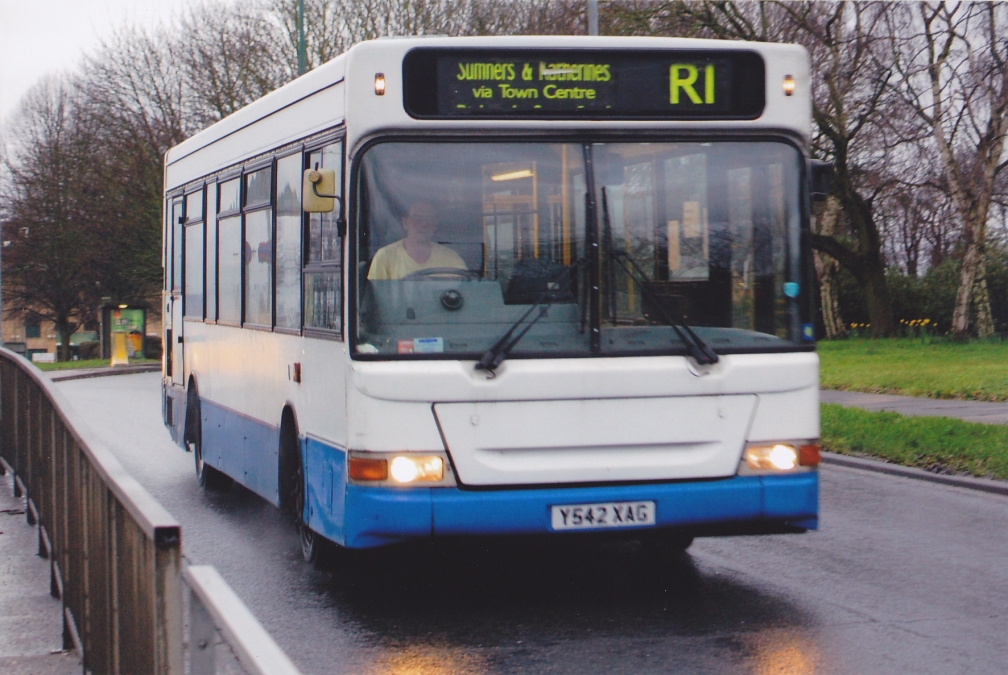 Above: In the final week of Townlink operations, Dennis Dart SLF/Plaxton Pointer Y542 XAG, hurries along Forth Avenue in Harlow, on 20/2/16. 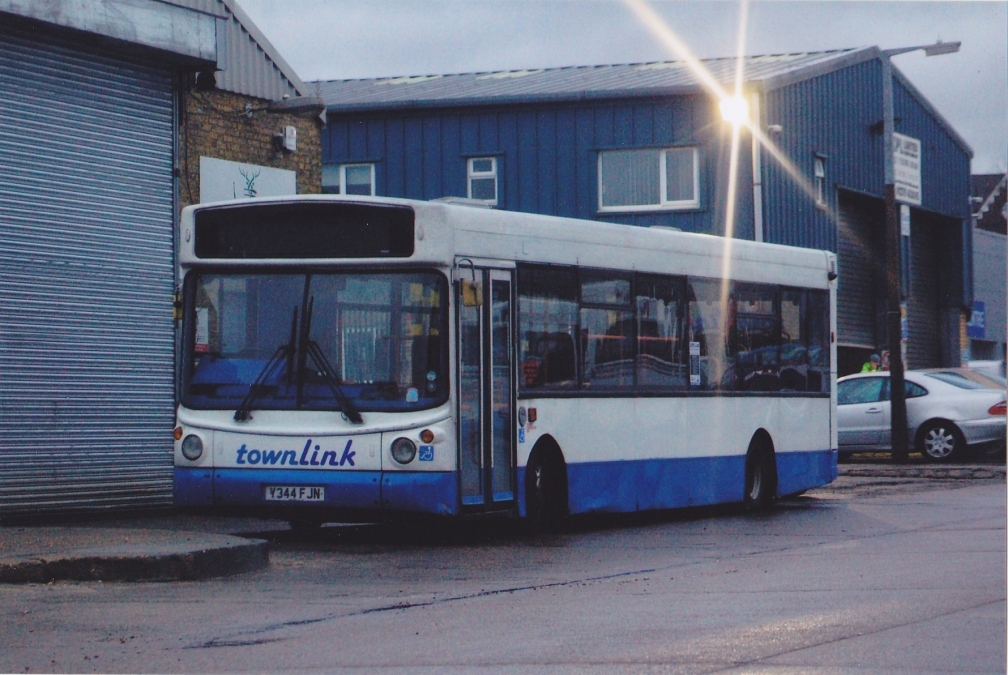