Welcome to the May 2019 edition of Busmopolitan. 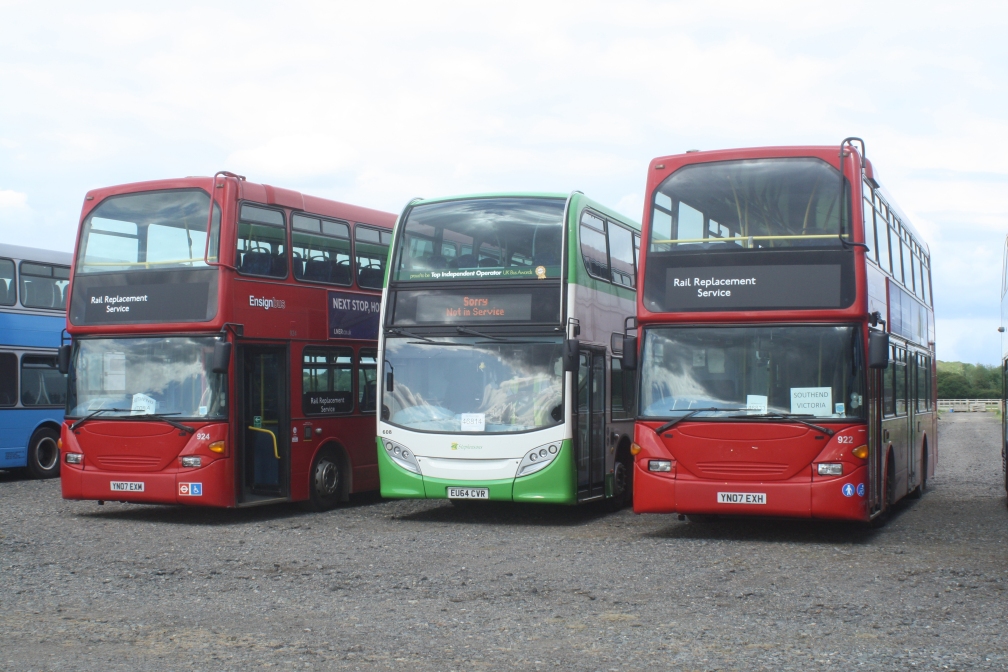 Between 25th May and 2nd June, there was a major rail replacement, covering the Greater Anglia route between Wickford and Southend Victoria. This was due to OLE (Overhead live equipment) renewal. Some of this infrastructure still dated from the original electrification of 1957. A temporary base for the replacement buses and coaches was set up at Barleylands Farm Park, near Billericay. Several operators berthed their vehicles there for the duration. 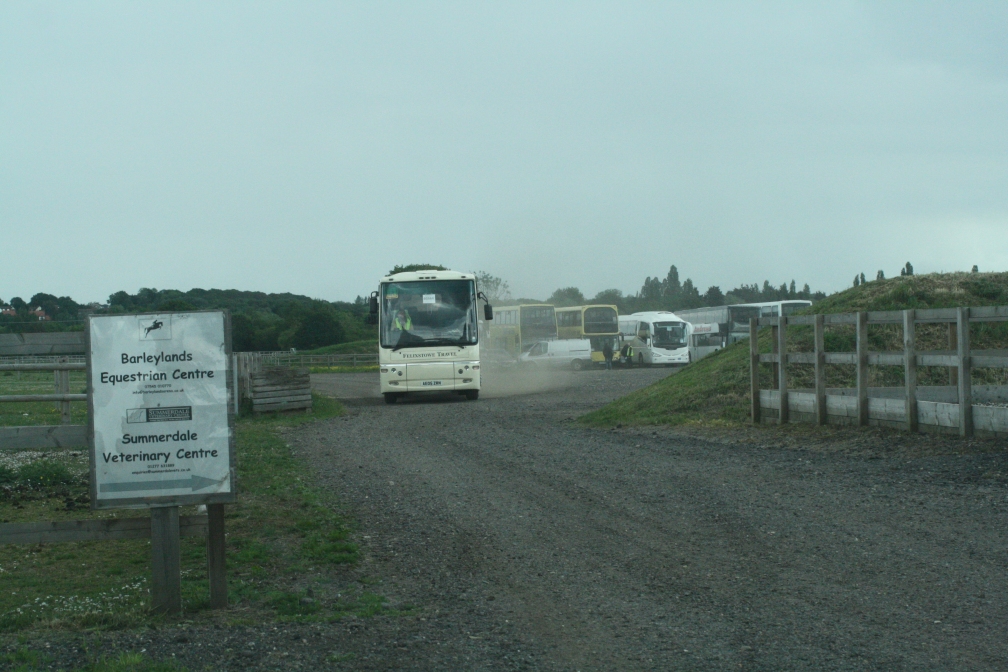 National news of interest is that bus builder ADL – Alexander Dennis Ltd,  has sold out to USA giant NFI, while it has been announced that First Bus UK is to be put up for sale by First Group.

And closer to home, Eclipse Coaches of Royston, Herts has ceased trading. Their vehicles were familiar on rail replacements in Essex. 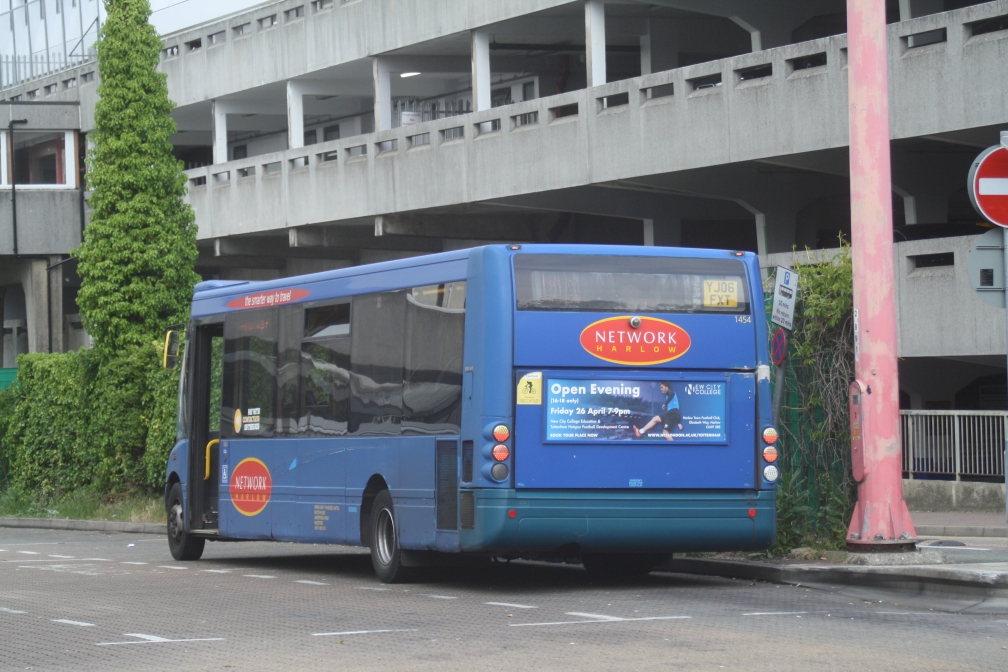 TfL128 (Romford-Claybury) is now seeing mixed VLA and T operation, although VLAs are the official allocation.
Barking is the last bastion of VLAs with their routes being 128, 173 (Beckton-Goodmayes) and 368 (Goodmayes-Barking).
Meanwhile, TfL123 (Wood Green-Ilford) is seeing a mix of DWs from Tottenham (the allocated garage) and also Edmonton and Enfield. The latter are “floats” to do with DW refurbishment programme.
Into Barking is ENL67.
Odd sightings:
11/5/19: Volvo B5H/Gemini3 HV356 on 123.

BEESTONS.
On 22/5/19, it was announced that the Witham site of Two Sisters Foods was to close. Beestons is the staff bus contractor, having taken over from Arriva Colchester in 2015. Fargo had been the provider between 1997 and 2006, with Tony Glew being the original contractor, for 3 months in 1997. Back then, the factory was was known as Grampian Country Foods. Staff buses ran to Colchester, Clacton, Harwich and Ipswich originally, but latterly only to Colchester and Ipswich.
Withdrawn is Scania/Wright X568 YUG.

Above: Still with its London General fleetnames and Merton AL depot codes, ADL/Enviro 400 E71 is one of those transferred for TfL396 and other east London tender gains. It was pictured on 11/5/19, heading down Cranbrook Road, between Gants Hill and Ilford. These will eventually be replaced on the 396, with new SE Class ADL/Enviro 200s. (John Podgorski). 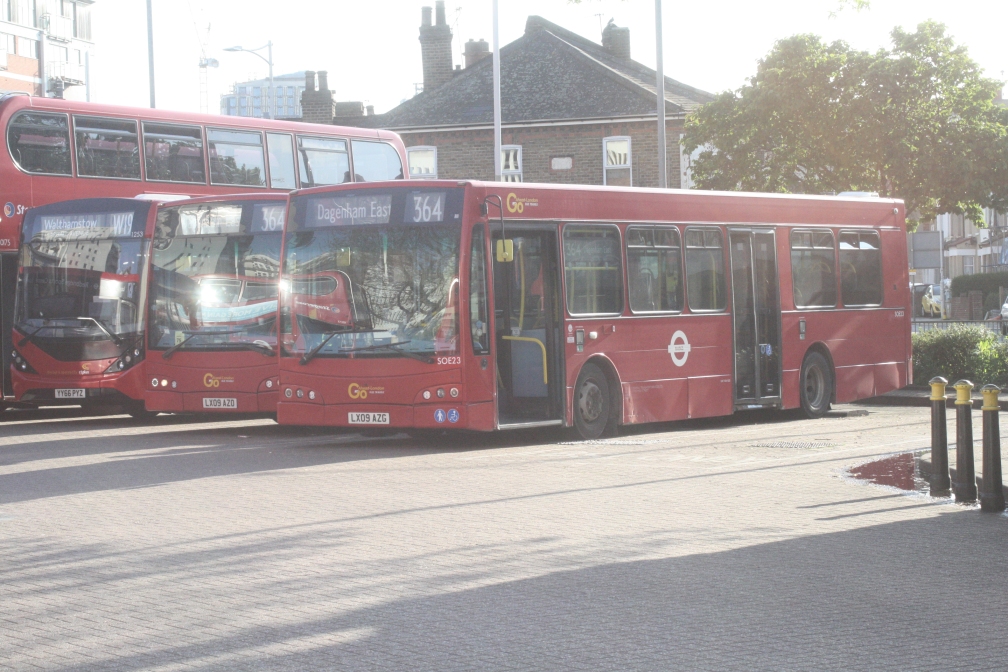 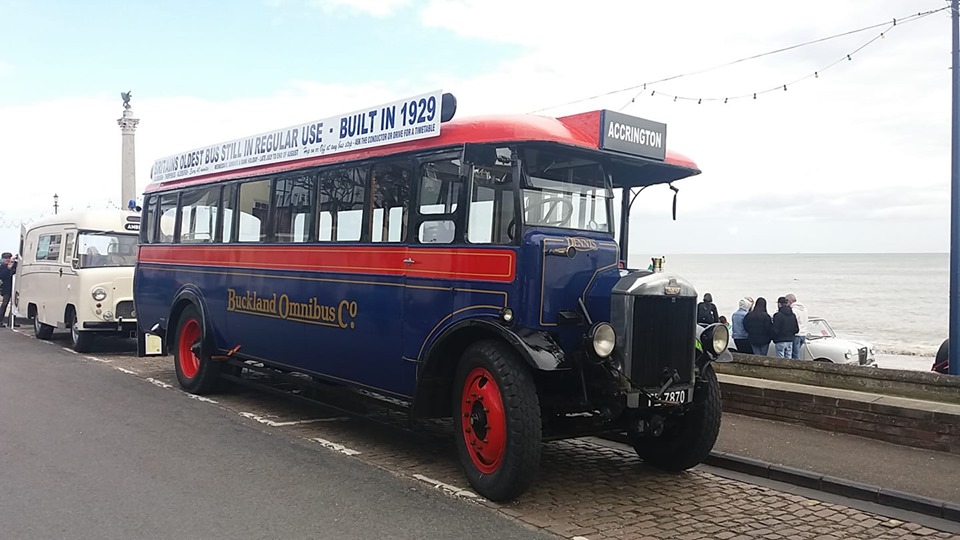 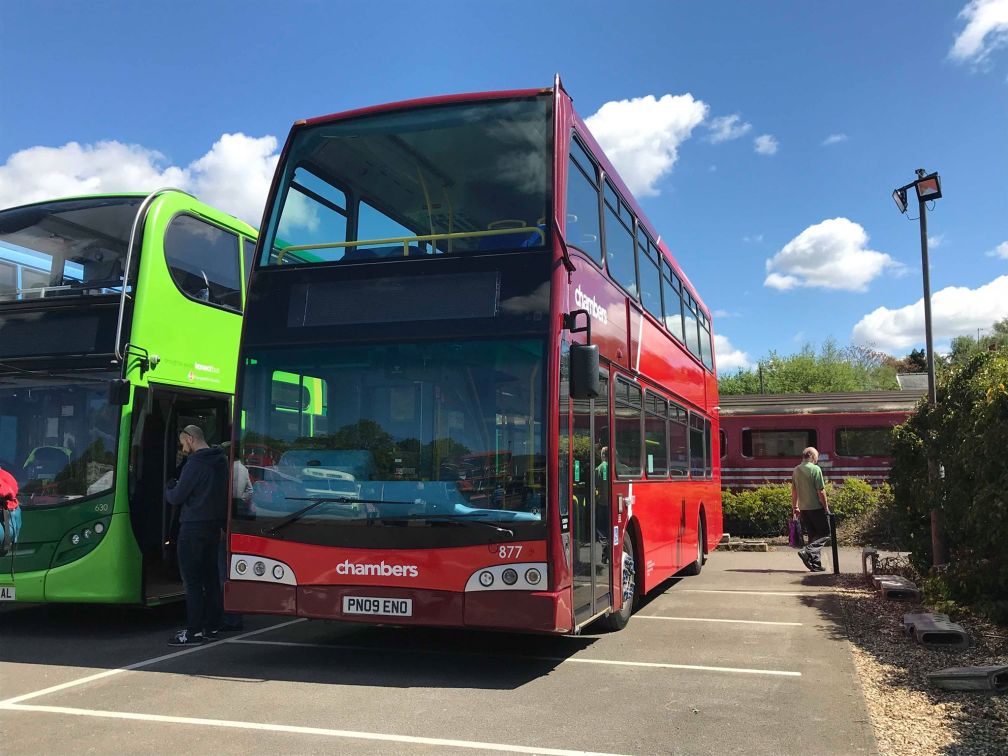 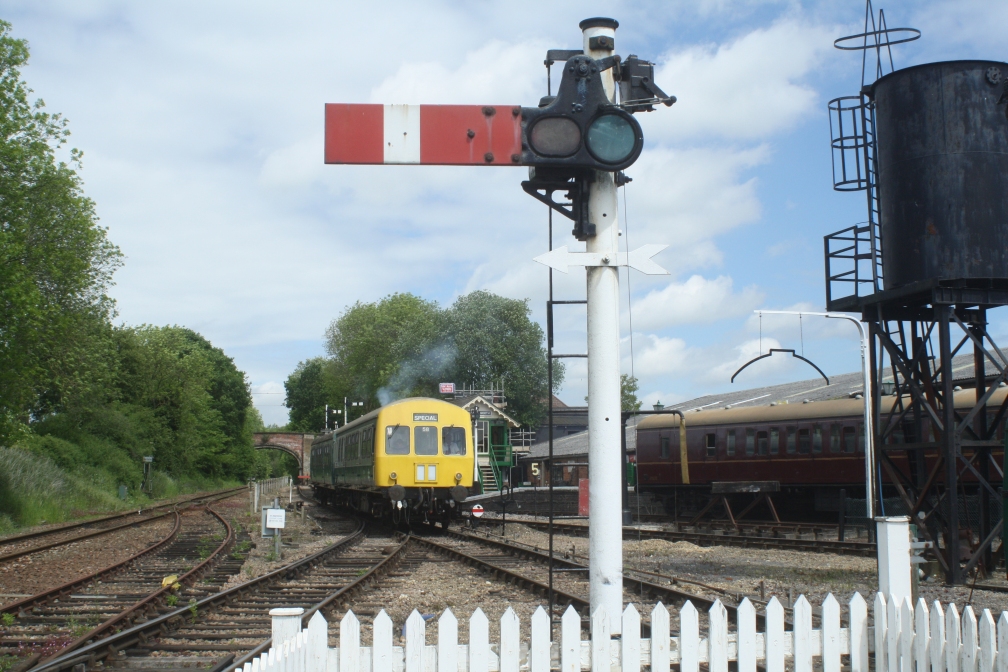 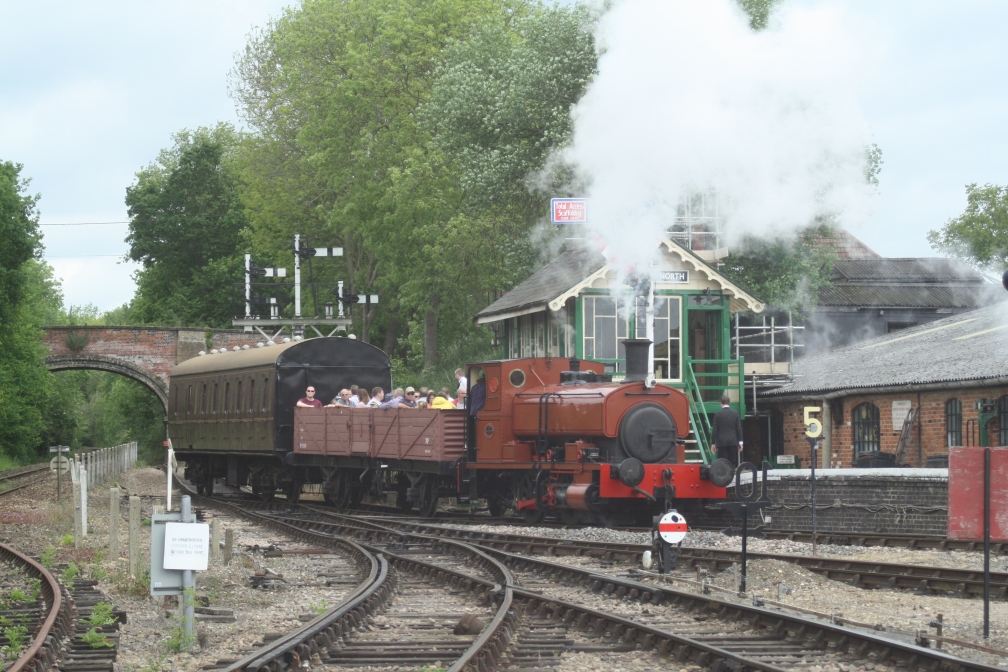 Above; Bristol VRT/ECW VR190 was one of a pair ordered by Waveney District Council – the old Lowestoft Corporation Transport, but diverted to Eastern Counties, upon their acquisition of the former undertaking in 1977. The other VRT was VR189 (RPW 189R), which worked at Felixstowe and Ipswich depot; however VR190 was based at Peterborough during its ECOC career, and is now preserved. It attended the Felixstowe Running Day on 5/5/19. VR190 was originally to have been registered RPW 190R, but was delayed into service as it was retained by Bristol Commercial Vehicles as a test rig. (Simon Austin). 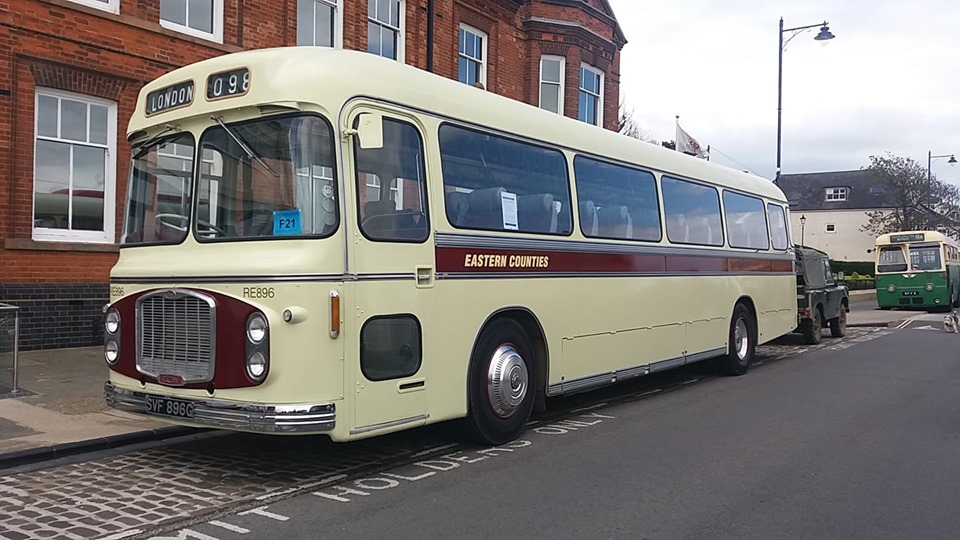 Above: Preserved Bristol RELH/ECW coach RE896 at the Felixstowe Running Day. New in 1968, it has been preserved since 1981. In the background is Ipswich Corporation AEC Regal BPV 8 from the Ipswich Transport Museum. (Simon Austin). 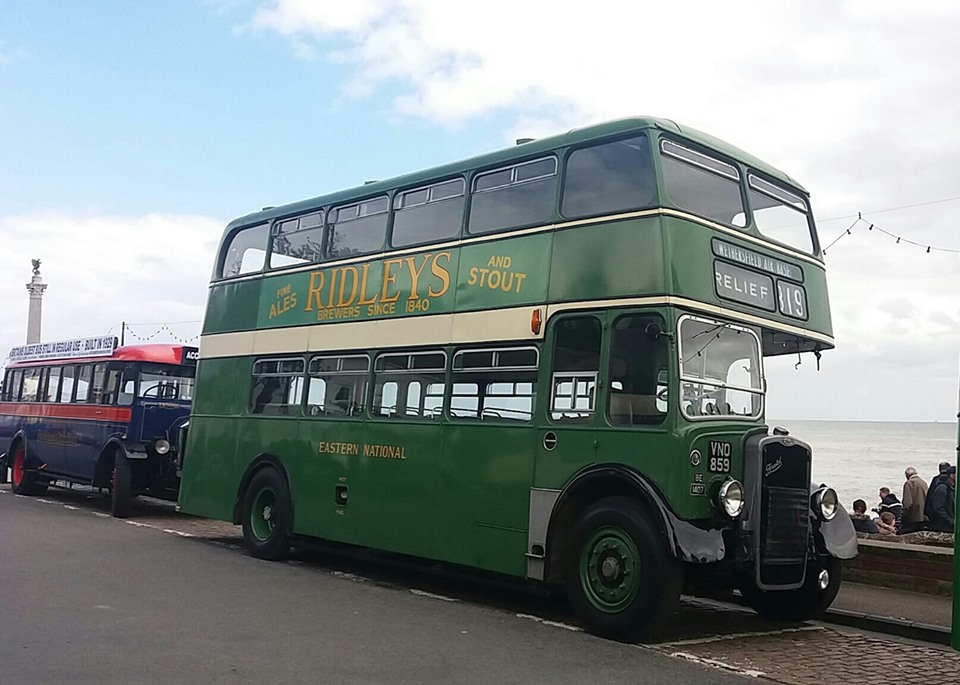 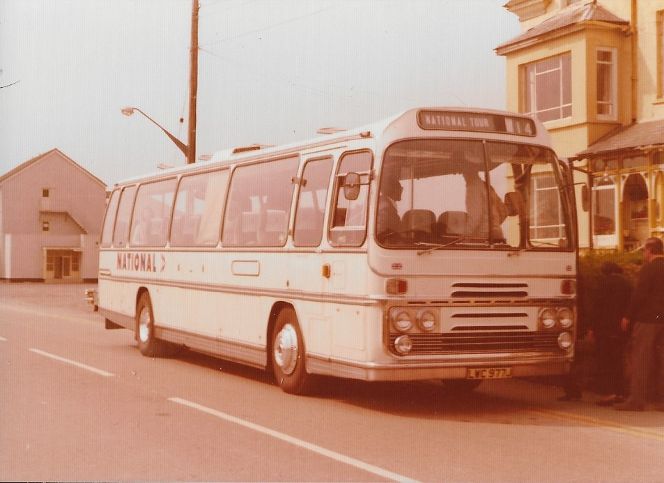 Above: Bristol RELH/Plaxton Panorama Elite LWC 977J at Fairbourne, Gwynedd on 29/5/1975. By then operated by National Travel South East, it was on a National Holidays Welsh Narrow Gauge Railways Tour. (Roger Pope).

EMPRESS OF LONDON.
Volvo B8R/Plaxton YN16 NWP is ex Somerset Passenger Solutions, Bridgwater.
The base has moved from Bethnal Green to Silvertown. 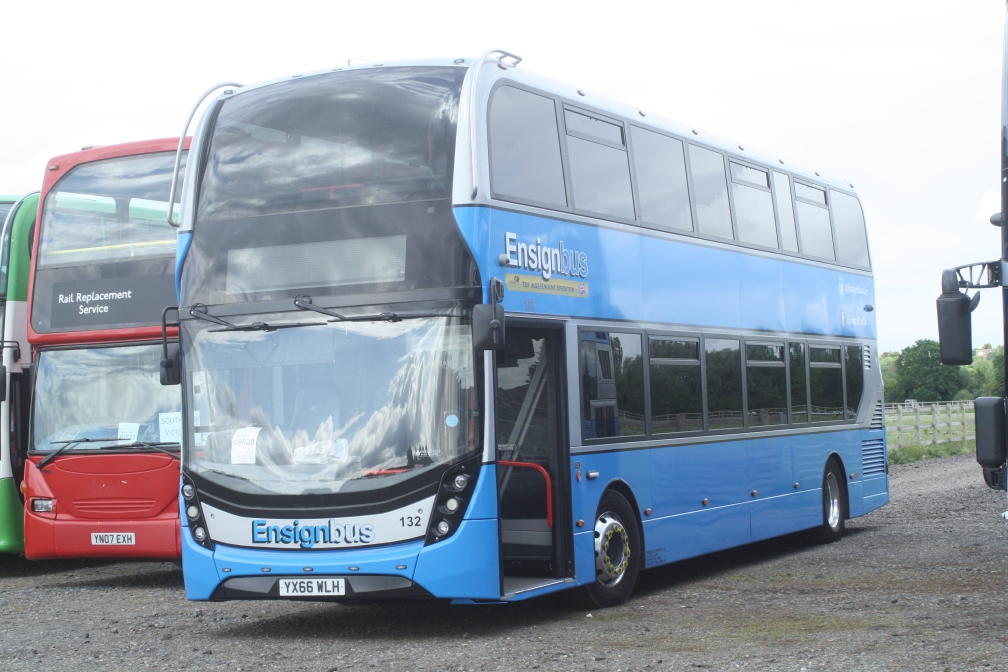 FELIXSTOWE TRAVEL.
Has two new Scania Touring/Higers M50 FXO and M60 FXO. The previous bearers of these registrations are sold.
Volvo B8R/Siderals M60 FXO has been re-registered back to its original BX11 GWE mark. Volvo B9R/Jonckheere M50 FXO has reverted back to PO11 KFL and been sold to Scania, Worksop (dealer).

A new identity has been launched – Ipswich Reds. 44517 is the first bus in this livery.

FIRST ESSEX.
From 1/5/19, only First Essex kept the legal address of Westway, Chelmsford. The other First companies which had used this, gained new local legal addresses. It is presumed these are in advance of these entities being offered for sale.
Ex First Manchester are Dart SLF/Pointers 42940 (MX56 HXZ), 42941/44/45 (WA56 OAO/U/V). These have been allocated to Chelmsford, to replace the last Caetano Dart SLFs there. SLF/Caetanos withdrawn are 41512/13/44. Also withdrawn is Scania L94UB/Wright Solar 62409. BMC 68510 is reinstated. 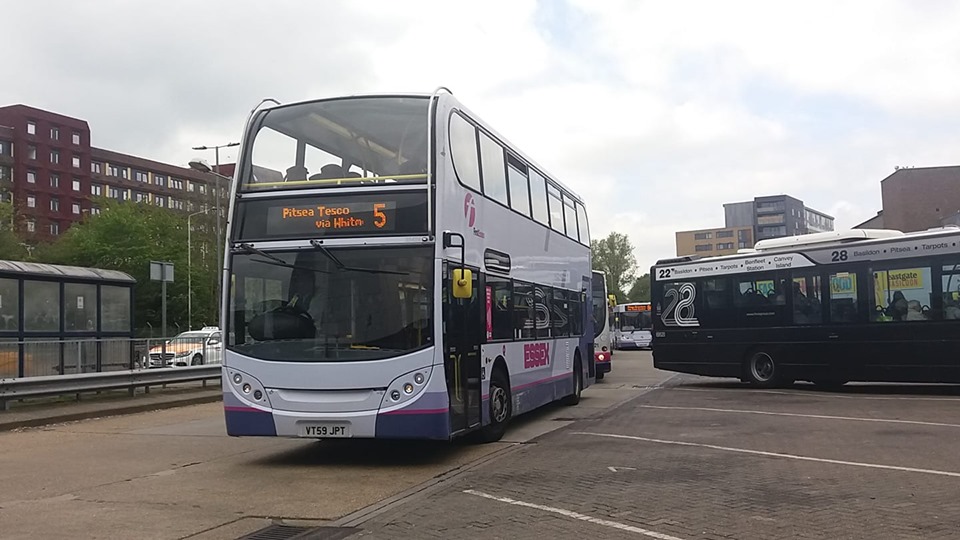 Above: ADL/Enviro 400 33424 in its regular Basildon haunts in May 2019. This bus was new to JP Travel, Middleton, Greater Manchester. (Simon Austin).

During early May, ADL/Enviro 200s 33424 (VT59 JPT), 33573 (SN58 EUR) were loaned by Basildon to Hadleigh for rail replacement, but also appeared in normal service.
Volvo B7RLE/Wright Solar Eclipse 66803 (MX05 CCN) has returned to Colchester, ex loan to Basildon. 66806 (MX05 CCV) has moved from Basildon to Chelmsford. 69533 was loned by Basildon to Colchester for one day only on 1/5/19. The B7RLE fleet is going through a re-engining programme -believed to do with Euro6 , and being done by the local Volvo agent. The Volvo B9TLs are having cooling system modifications for the same reason. 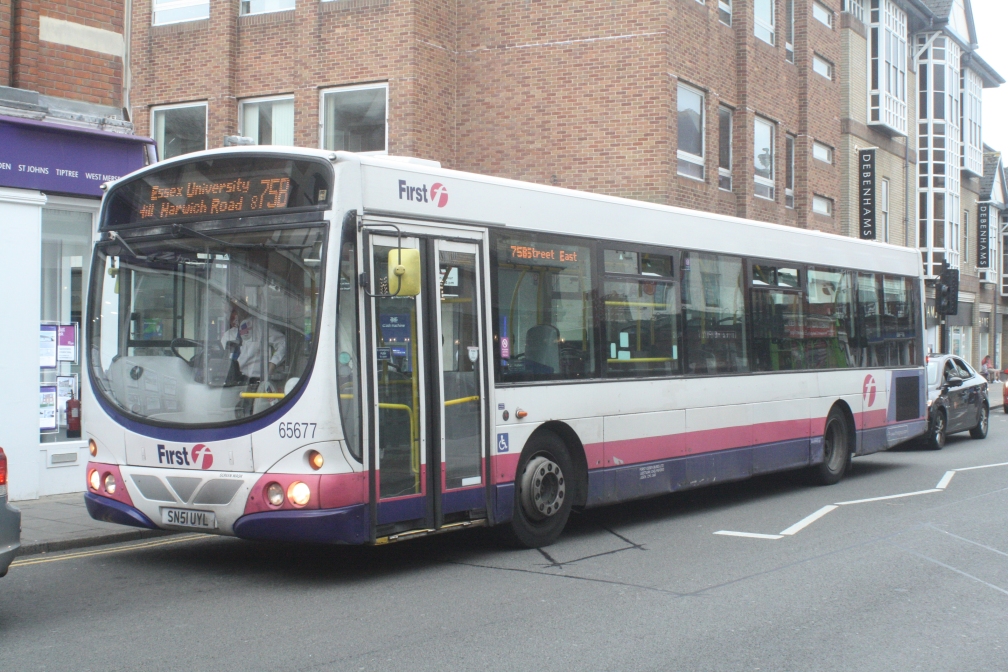 New route 75B has taken over the Colchester town centre-University of Essex section of 75.

From 26/5/19, route 100 was plit into two sections; Chelmsford-Bsildon and Basildon-Lakeside. The same number is retained for both and is to do with improving timings on this 2 hour long service. 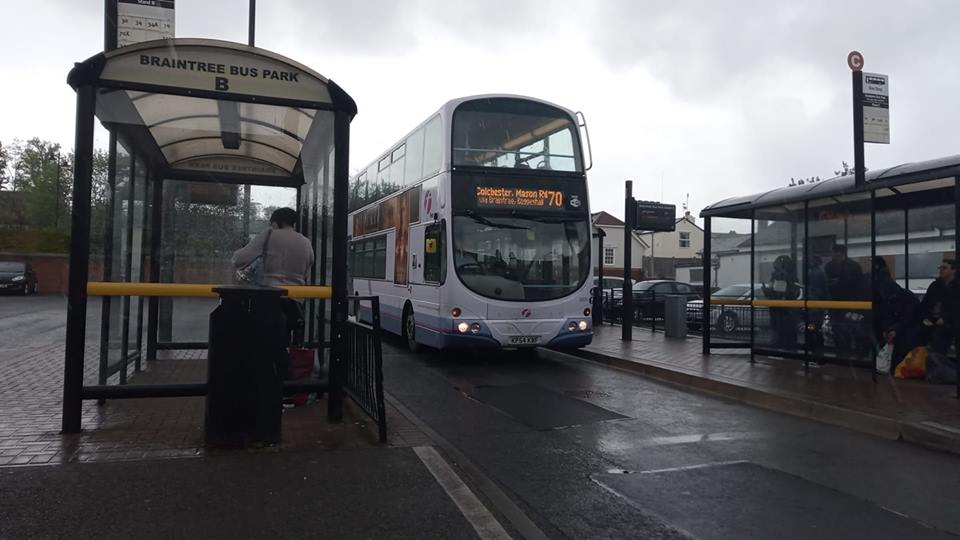 Above: Since their transfer from Colchester to Chelmsford in August 2018, the former Leicester Volvo B7TL/Wright Geminis have normally appeared on the long Chelmsford-Braintree-Colchester route 70, with occasional appearances on Colchester Schools also. 32631 (KP54 AZB) was heading eastbound at Braintree Bus Park on Sunday 28/4/19. Note the Colchester terminus on the Sabbath/public holidays is Mason Road, rather than Osborne Street. (Simon Austin). 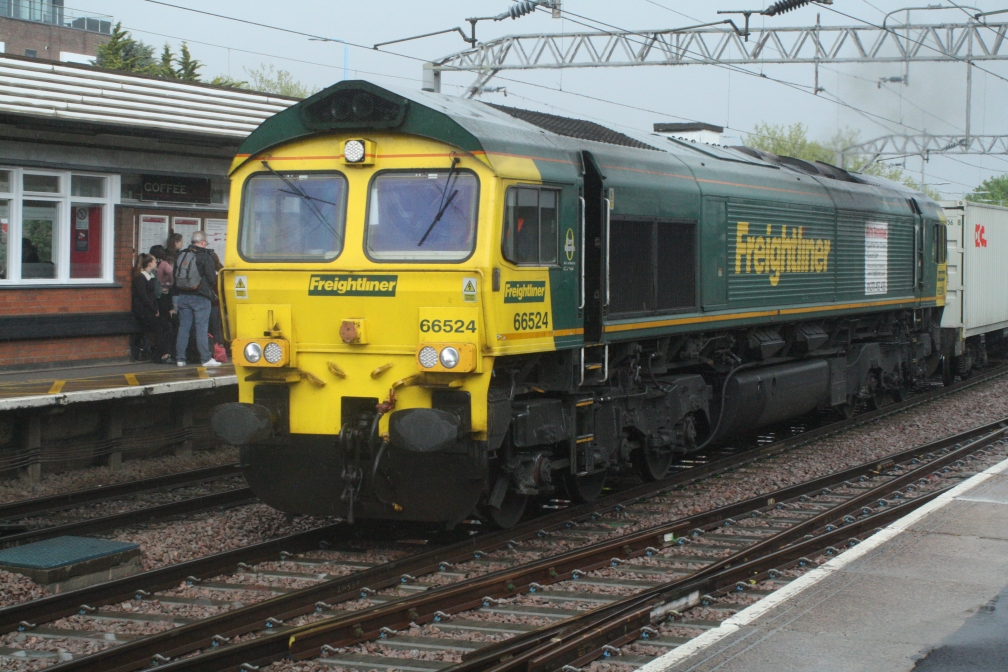 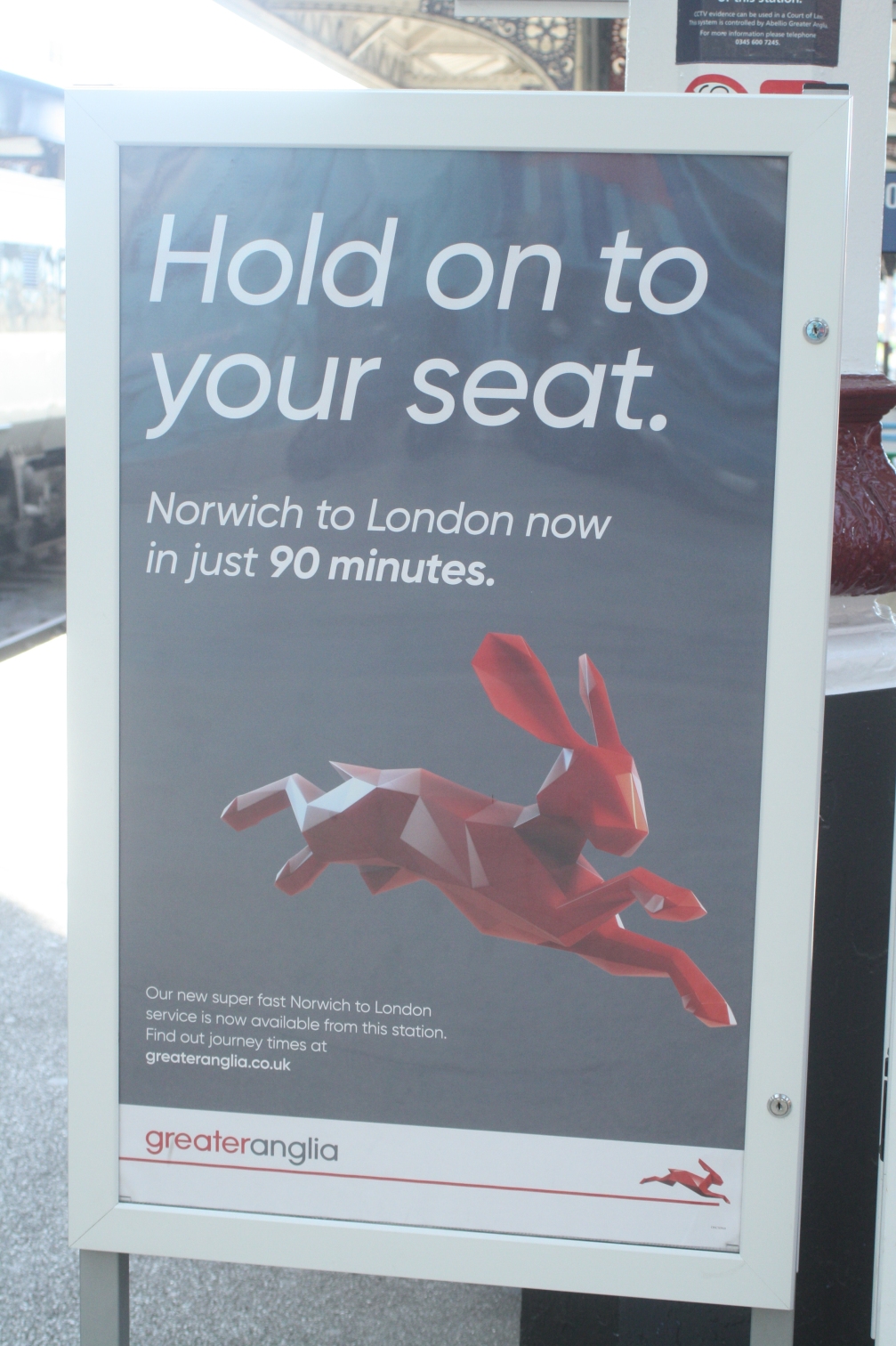 On 20/5/19, “Norwich in 90” and “Ipswich in 60” were launched. These London Liverpool Street express services only call at Norwich or Ipswich. There are four trains a day, M-Sat. There is criticism that these do not serve stations in Essex, but it is understood that a “Colchester in 40” is planned when the new Class 755s enter traffic. The inaugural “Norwich in 90” actually reached Liverpool Street in 97 minutes – due to a signal check at Bethnal Green.

Ingatestone railway station celebrated its 175th birthday on 12/5/19. There was a special ceremony for this restored building, which is still very much in use. 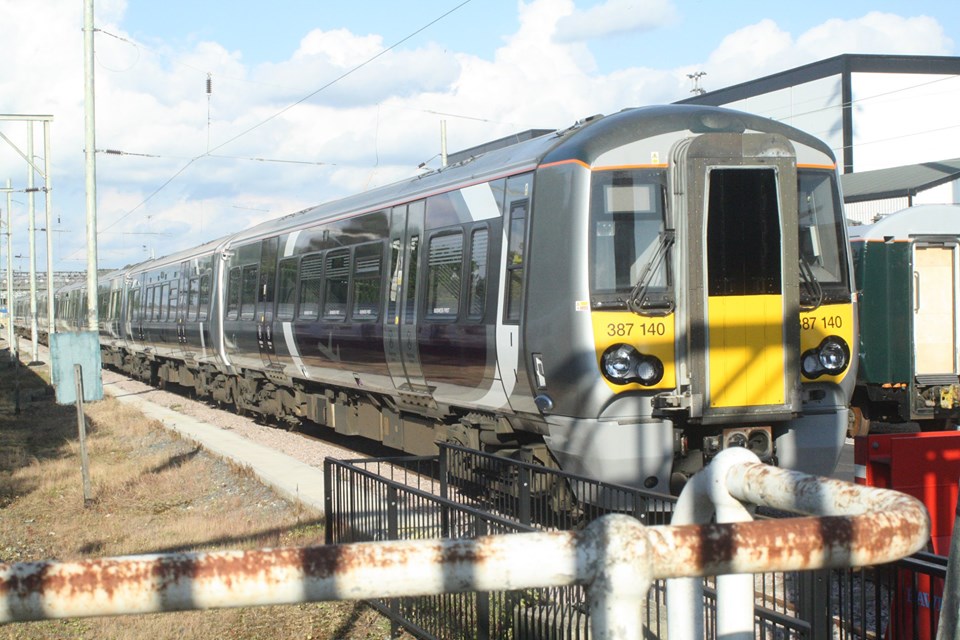 11/5/19: 387140 at Ilford depot and to Heathrow Express livery. GWR is to take over HEx from Heathrow Airport Ltd, and the current Class 332 EMUs will go for scrap, as they are now obsolete technology. This is due to happen in December 2019. 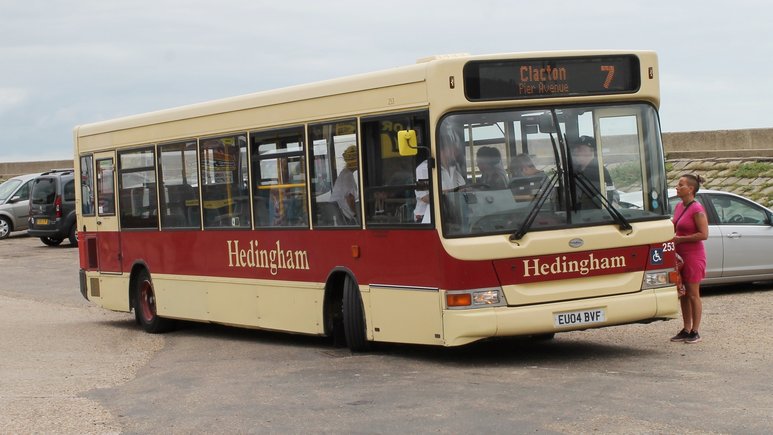 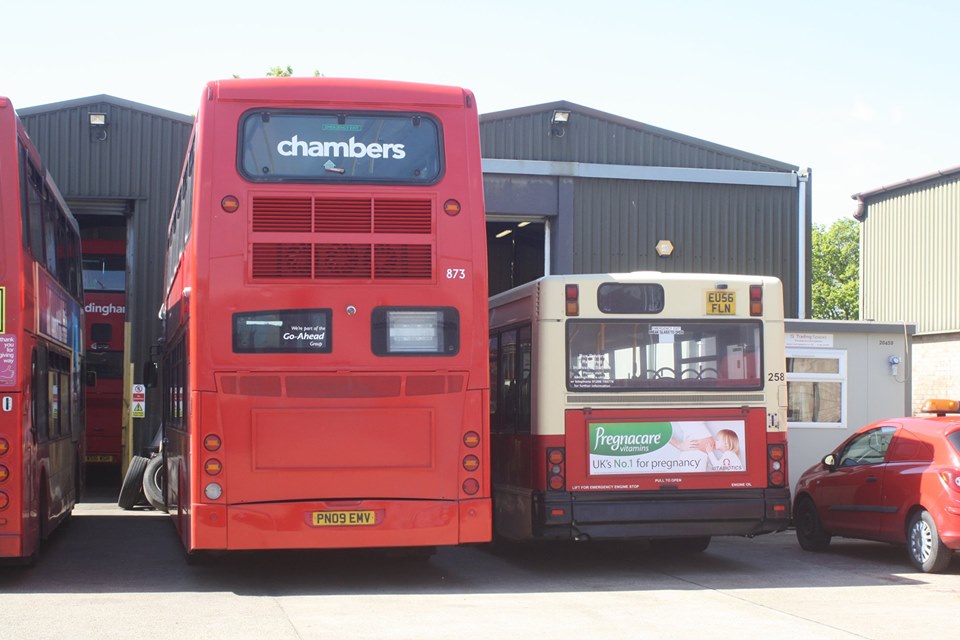 HIGHWAYS, LEIGH ON SEA.
The operators licence has not been continued.
The last vehicle owned was Renault Master BX61 GCK.
Large coaches had once been operated. 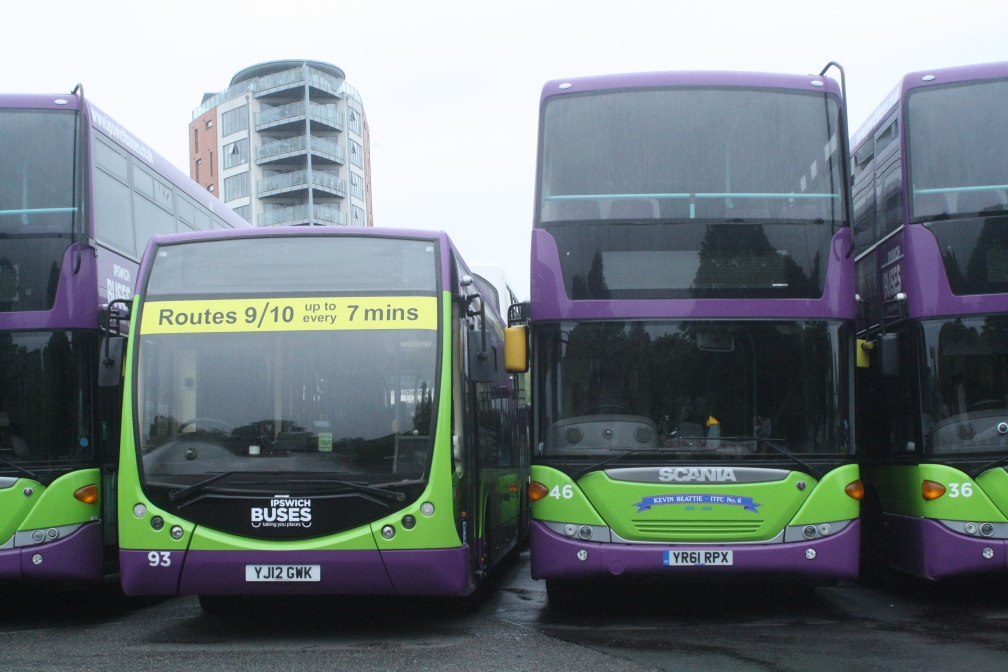 Above; Tempo 93 and Omnicity 46 ‘Kevin Beatty’ on depot on 19/5/19. Kevin Beatty was a famous footballer for Ipswich Town FC. (John Podgorski).

KINGS TOURS, COLCHESTER.
VH TX KC12 ABC has been sold to Evobus (dealer), Coventry. However it remains on hire to Kings for the time being.

Above: 315808 departs Romford for Upminster on 4/5/19. These are currently operated from Ilford depot, with crews supplied by MTR TfL Rail. (John Podgorski).

Above: Neoplan Tourliners MM18 BUS and MM68 BUS on depot on 2/5/19. MM18 was initially exhibited at the Bus and Coach Show at the NEC, hence its livery. (Mark Hough). 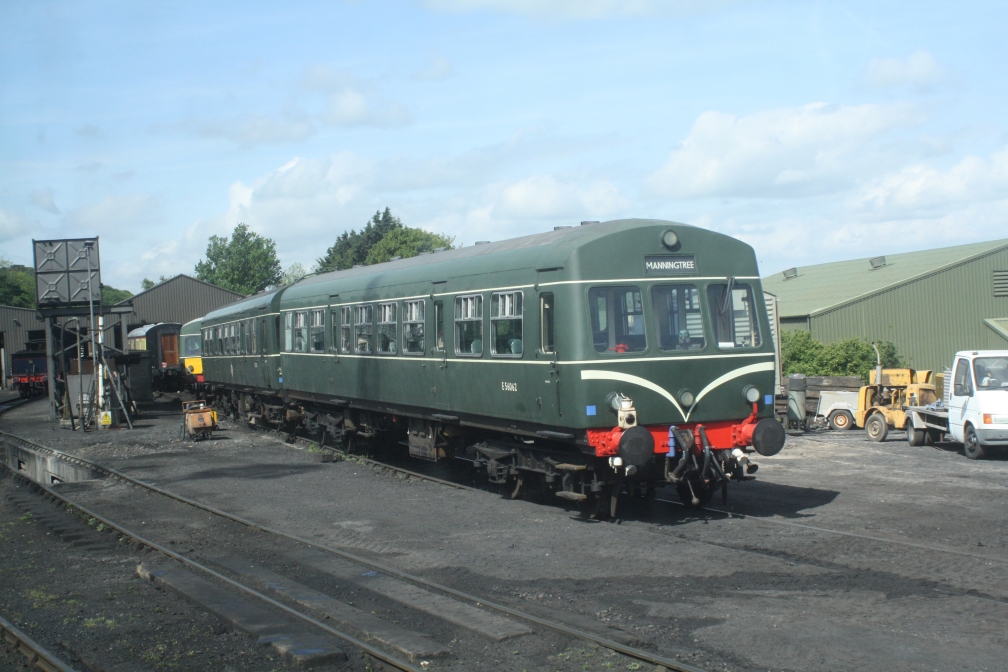 Above: Dennis Dart SLF/Plaxton Mini Pointer KV51 KZK, is pictured with its new owner, A2B of Cambridge, on 25/5/19. (John Podgorski).

Below: And the buses were connecting with Greater Anglia 153306 at Woodbridge, for onward travel to Lowestoft. (Alex Hazell). 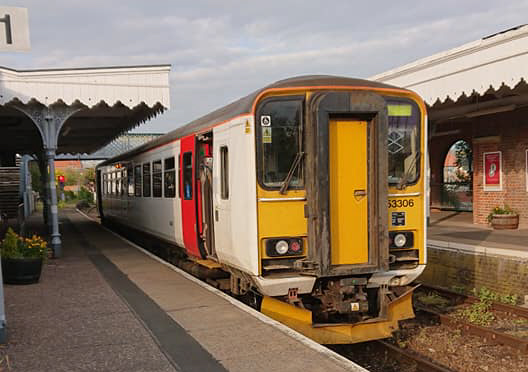 Above: A very rainy night in Ipswich on 8/5/19, and ADL/Enviro 200 SB09 PAN is on a Greater Anglia emergency rail replacement to Felixstowe. (Alex Hazell).

RAILWAY MISCELLANEOUS.
The old Cliff Quay branch in Ipswich has seen undergrowth clearance, between the north side of the old Ranelagh Road level crossing and the bridge over the River orwell. Track remains on the bridge, while the old semaphore signal by the crossing has now gone. 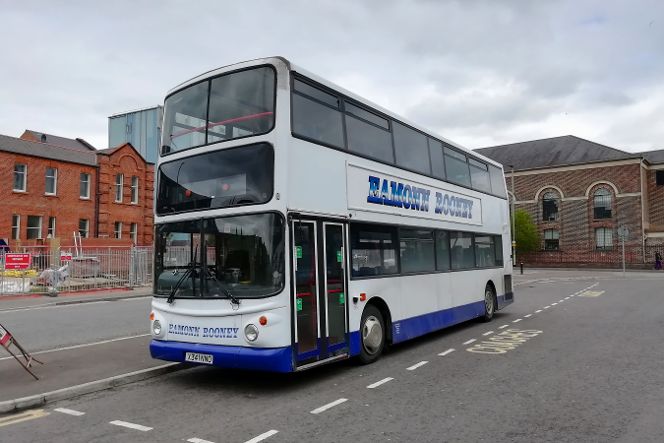 Above: New to Selkent at Bromley, then with East London at West Ham, Dennis Tirdent/Alexander ALX400 17341 is now with Eamonn Rooney of Hilltown, County Down, Northern Ireland. It was pictured on a private charter in Belfast in May 2019. (Paul Savage).

On 20/5/19, there was a collision between Volvo B8RLE/Wright 21302 (BF65 WKR) and a Vauxhall Vectra car on the level crossing of the North Cambs Guided Busway over the B1050 at Longstanton. The car caught fire and the subsequent conflagration destroyed it and the bus. All in the car and on the bus were safely evacuated before the fire took hold. Volvo B7RLE/Wright 21228 (AE09 GYY) has returned from Cambridge as a replacement.

TENDRING TRAVEL.
Ford Transit 16 seater RA03 ENN has passed to Midland Trade Centre, Tardley (dealer). It was replaced on its school contract by Iveco Turbo Daily YX10 DJJ.
Scania K114/Irizar YN56 FGJ is now with Widnes Coaches.
Following sale to a preservationist, Setra S315 W973 UAR was subsequently stored at Don’s of Dunmow and then Viceroy at Saffron Walden. It has now gone to Wigley, Carlton for scrap.

TRANSPORT for LONDON.
One of the road corridors to become a LEBZ – Low Emission Bus Zone is Mile End via Bow, Stratford, Forest Gate, Manor Park to just short of Ilford. So basically affecting TfL route 25 and sections of others.