Welcome to the July 2015 edition of Busmopolitan.

7th July sees the tenth anniversary of the 7/7 London bombings, when suicide attackers targeted the Capital’s public transport system with 3 devices on the Underground and one on a bus, during the morning rush hour.
52 people were killed (excluding the 4 terrorists), and around 770 injured.
The timeline of the bombings was as follows:
1: Explosion on Circle Line train between Liverpool Street and Aldgate at 0840. 7 killed. Service was clockwise, with C69 Stock unit 5548+6548 being damaged.
2: Circle Line service attacked at Edgware Road. 6 dead. Service was anti clockwise. C69 Stock car 6505 and C77 Stock car 5713 virtually destroyed.
3: Blast on Piccadilly Line train, in tunnel between Kings Cross and Russell Square. Death toll 26. Service was westbound, with explosion happening in the rear of 1973 Tube Stock driving car no 166. This and trailer no 566 were damaged beyond viable repair.
(All the Underground incidents happened within 50 seconds of each other).
4: Stagecoach East London Dennis Trident/Alexander ALX400 17758 (LX03 BUF), blown up at Tavistock Square, with 13 deaths. The bus was on diversion off route 30, due to road closures caused by the earlier bombs.
As a result, central London was put into a lockdown, with all public transport in Zone 1 suspended. There were scenes reminiscent of New York on 9/11, with many workers opting to walk home or to the nearest Zone 2 bus or rail head.
Those who lost their lives were aged between 20 and 60 years, and came from diverse backgrounds. All but one were residents of London.
A permanent memorial for them stands in Hyde Park. It was unveiled by HRH The Price of Wales on 7th July 2009.
On 7th July 2015, there was a memorial service for the 7/7 victims in St Pauls Cathedral. This was preceeded by a wreath laying ceremony at Hyde Park by Prime Minister The Right Honourable David Cameron and Mayor of London Boris Johnson. The laying took place at 0850; the time the first bomb had been detonated, 10 years ago.
Then, at 1130, a minutes silence was observed; across London and beyond.

Above: Stagecoach East London ADL/Enviro 400 19000 ‘Spirit of London’, at Dunsfold during the London Bus Museum Gathering of April 2011. This bus directly replaced the destroyed 17758, which passed to PVS for scrap after the end of the criminal and forensic investigations. 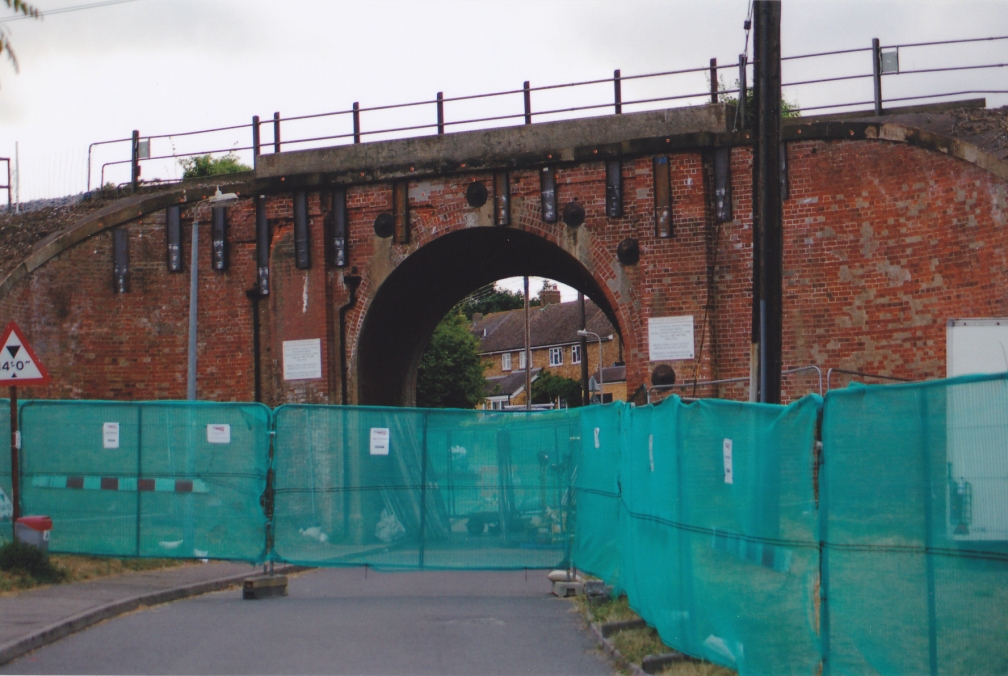 On 5/7/15, Blunts Hall bridge (pictured above), on the GEML between Witham and Hatfield Peveral, was damaged in an incident during ballast cleaning. There was significant disruption into the following week, with speed restrictions being imposed. 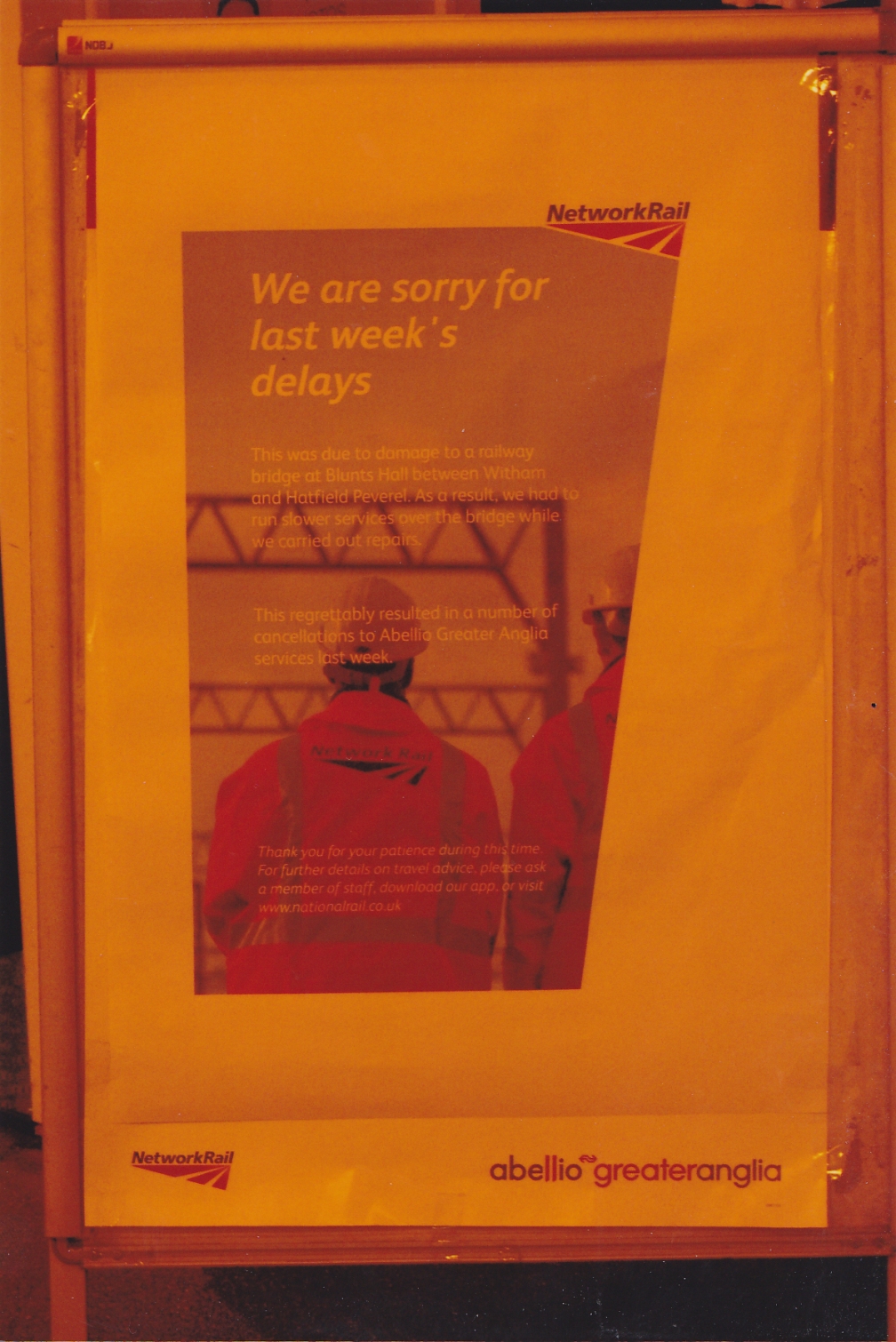 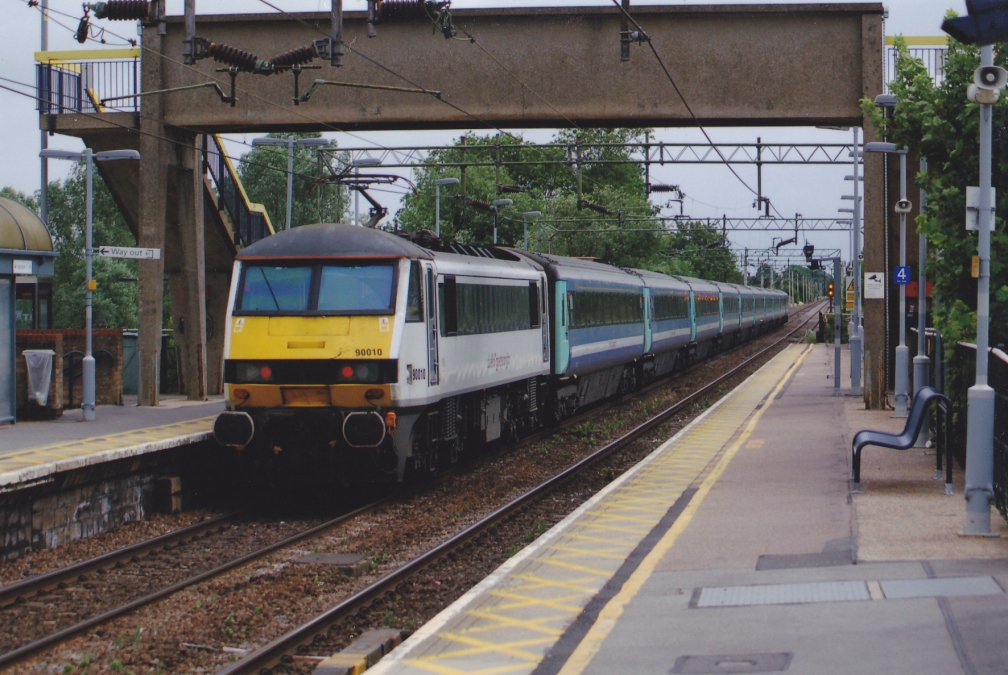 APT, RAYLEIGH.
Iveco Eurorider/Beaulas PT03 APT has been re-registered back to its original FD03 YON mark. PT03 APT is now carried by by a Scania K114/Irizar which was previously SN03 CLZ.
Volvo B7R/Plaxton 827 APT has ben upseated from 57 to 70. 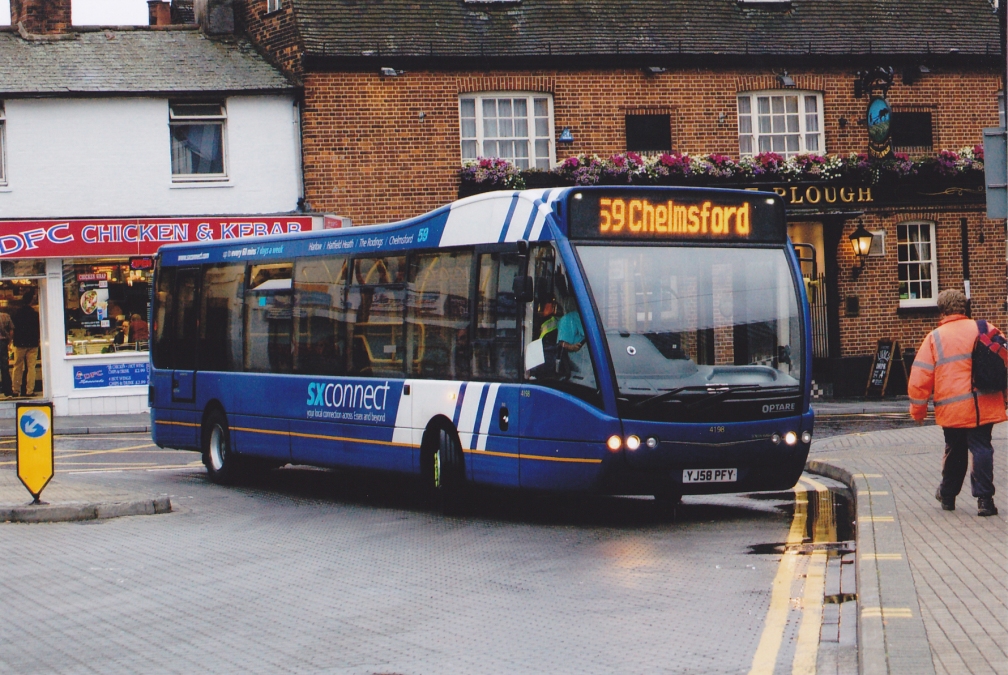 BLUE TRIANGLE.
Scania N230UD/OptaRE oLYMPUSES 879-82 (PN09 ELV/W/X/F) ahave, following the loss of TfL498 to Stagecoach, returned to Metrobus. They however, now work from Croydon, rather than their original Orpington.
Dennis Dart SLF/Plaxton Pointer LDP194 (SN51 UAG) has gone to Metrobus at Orpington.

BUS 4 U (JONES OF BRAINTREE), STANSTED. 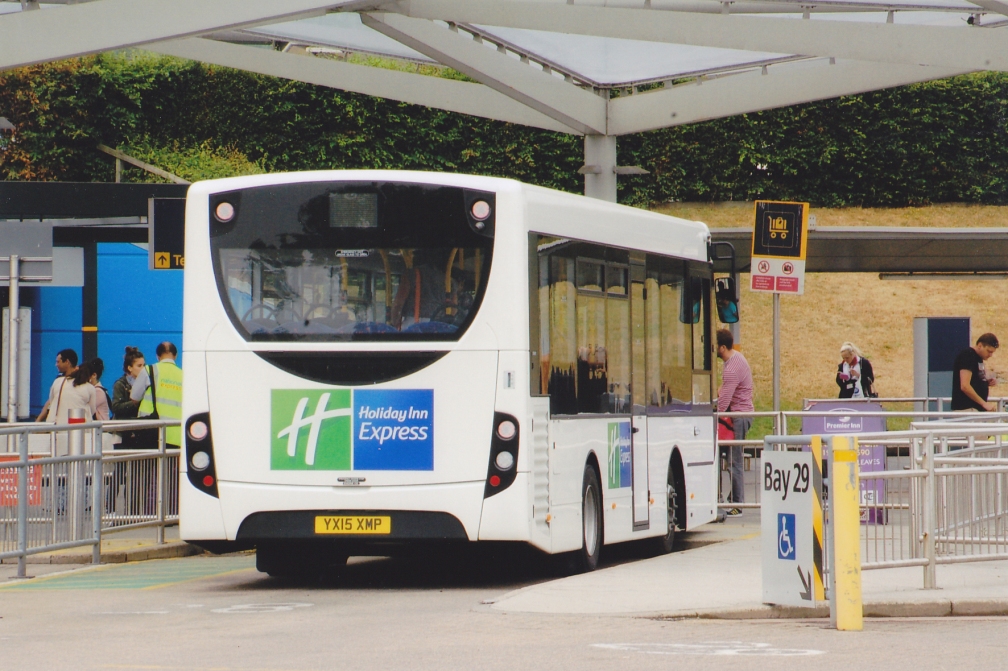 Above: One of the new pair of ADL/Enviro 20Ds, at Stansted Airport Coach Station on 5/7/15.

BUS AND COACH MISCELLANEOUS.
Registration mark KCH 106, which had originally been on a Trent Motor Traction Leyland Titan PD2; has been observed on a Kia Sportage MPV at Tiptree. The mark had last been recorded on a Ford Escort.

C2C.
Electrostar EMU 357223 has been renumbered 357323.
It has had its 3+2 seating replaced by 2+2 and received extra internal grab rails to make it into a “high density” unit. More of this sub class will follow.

Above: After temporary use at Docklands on the new TfL135 (Crossharbour-Old Street) contract (before receipt of new vehicles); ex London Central ADL/Enviro E40D E208 was one of several then used on Wimbledon Tennis shuttles by London General, prior to taking up appointment at Metrobus Orpington depot. This view was taken on 12/7/15; day of the tennis finals. Novak Djokovic of Serbia won the men’s title, while the womens’ champion was Serena Williams, from the USA.

Dart SLF/Caetano 783 (MV02 BLU) has passed to Trustybus at Harlow.
Leyland PD3/EL MHJ 347F has gone to a preservationist for restoration. 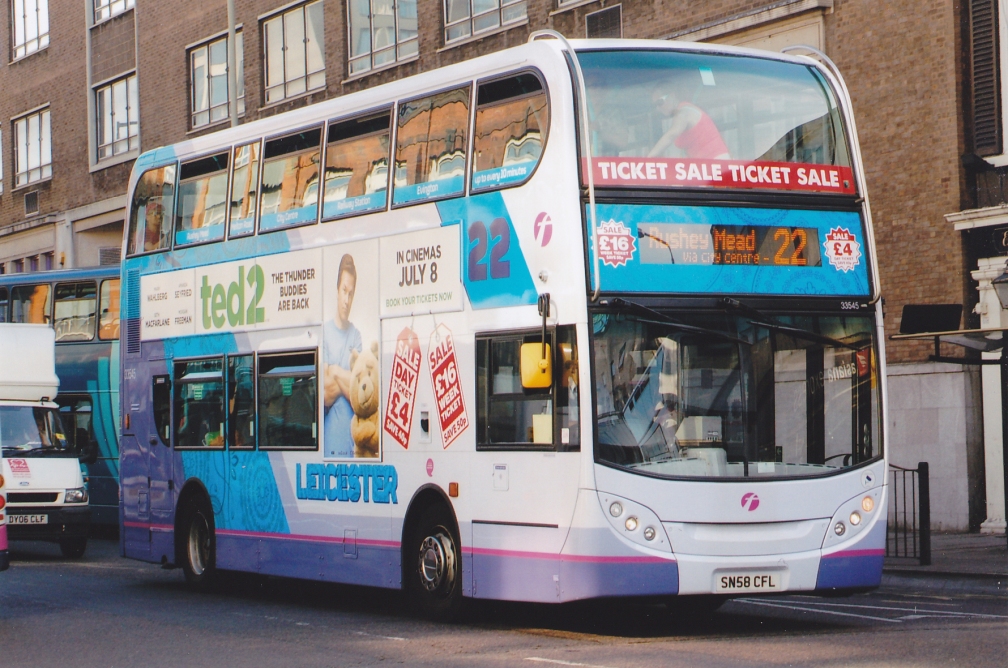 Above: ADL/Enviro 400 33545 was one of those transferred to First Leicester, when First Capital closed in 2013.
It was pictured in its adoptive city on 4/7/15, promoting bargain bus fares. 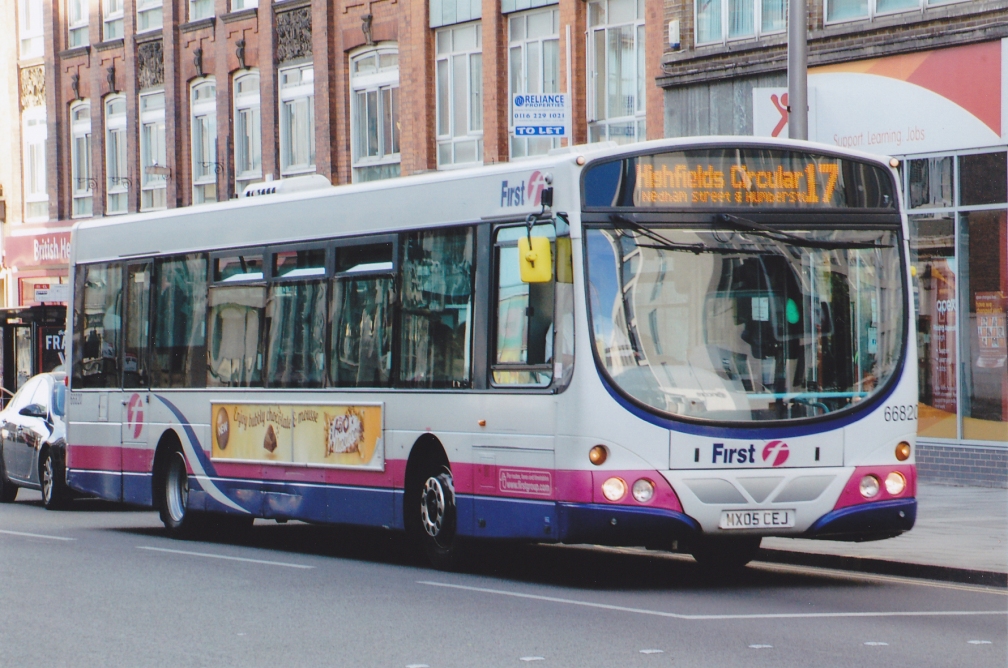 Heavy Haul 66527 has been noted on Intermodal. It was pictured (above) heading the 4M92 service, London bound through Marks Tey on 23/7/15.
At Dagenham Dock, in addition to the sidings being lifted, the old crew accommodation block has been demolished.

GOLDEN BOY, HODDESDON.
MAN 14.290/UNVI VV14 BOY carried a green overall vinyl advert livery for Doosan Group.
This was to do with Doosan’s sponsorship of the Open Golf Championship at St Andrews.

GRAHAM’S OF KELVEDON.
One year on, Mercedes 711D/Onyx P2 BST remains withdrawn at the depot. There was interest from a local buyer, but this fell through.

Above: The now scrapped Volvo Olympian no 94, seen on Colchester High Street in March 2005, as no L333 and working service 80 (Boxted-Colchester-Fordham) from Sudbury (SY) depot. Sudbury is of course now occupied by Chambers, while route 80 is operated by Stephensons.

Above: Volvo Olympian 93 pictured at Kelvedon on 14/3/14, when still numbered L341. It was minus fleetnames as it had a spell at Chambers. Alongside is Volvo Olympian/Alexander RH L366, now 76, which had also been seconded to Chambers, and was still so branded at the time of the picture.

NC bodied Volvo Olympian 65 (L109 LHL), has taken up residence at a school in Wimbledon, for use as a static library. Go-Ahead London helped in the conversion and delivery.
Former Dennis Dart/NC L342 (L108 HHV) has been resold via Nash (dealer) Ockley, to
Elliot and Richman, Rode Heath, Cheshire.

IPSWICH BUSES.
Further acquisitions from Lothian Buses are of Dennis Trident/Plaxton Presidents SN51 AXF/O/P. They are numbered 22/3/4, and were repainted/retrimmed before entering service.
On loan from ADL in late July, was Enviro E40D YY64 GWX.Optare Excel 170 (YG52 DGO), has a super rear advert for Bristo’s Dacia.
The workshop/bodyshop building at Constantine Road depot has been offered For Sale or To Let.
Former Leyland Atlantean/Roe 85 (WPV 85L) has passed to a preservationist, after many years as a mobile control “tower” at Anglia Gliding Club, Wattisham Airfield.

Above: Refurbished Dart SLF/EL Spryte no 94 at Ipswich rail station on 31/7/15. Note is has lost its name ‘Dauntless’

LONDON UNDERGROUND.
There was a 24 hour stoppage on 8th and 9th July; connected with the commencement of weekend night services on certain lines from September. Unions are concerned about revised working conditions for the above. Extra buses were used at peak hours for the duration on some central area routes; co-ordinated by Ensignbus.

The first of the ex D78 stock cars converted to ‘D Train’ specification by Vivarail
was shown to the press and other interested parties, at Long Marston during July.
Externally, it is still recognisable as D78, but the cab end door has now gone and there are redesigned head/tail light clusters. Livery is green/silver with a black/yellow cab end. Internally, different seating configurations are available, for urban or rural/provincial use. Beneath “the skin”, there is a modular diesel power plant, to minimise maintenance downtime, along with updated electrical control equipment. Tests will start shortly. The vehicle sports unit number 230001. 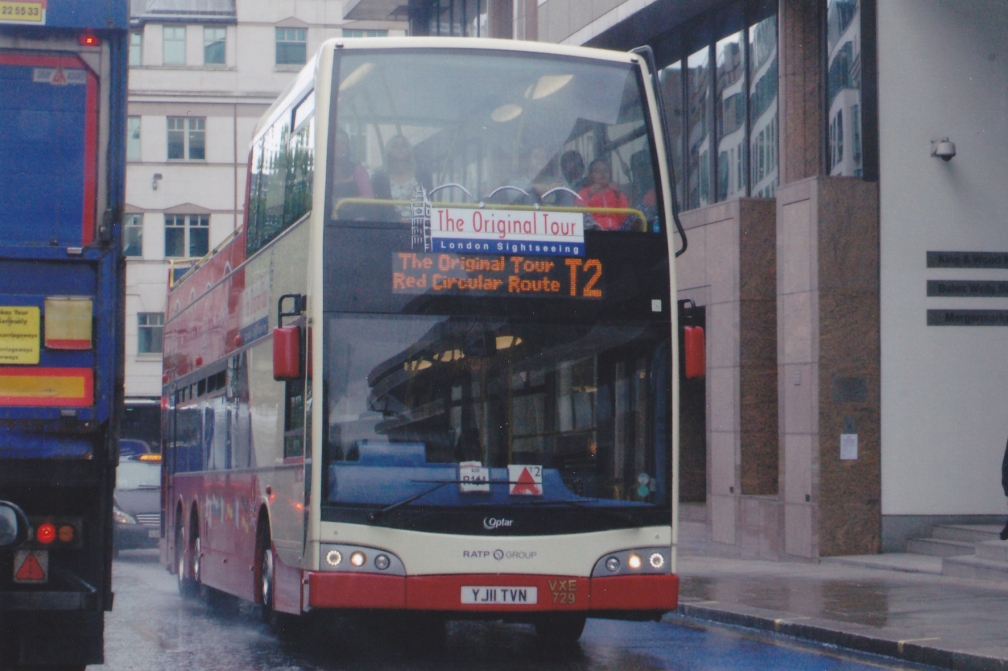 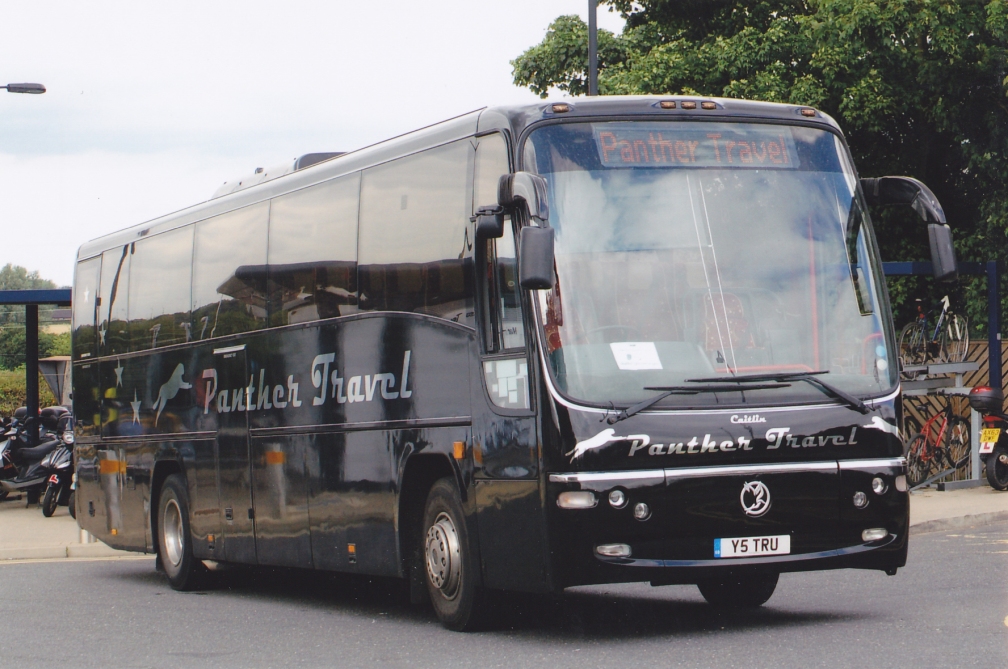 STANWAY TRAVEL SERVICES, COLCHESTER.
Registration mark 269 YPJ, which had been carried by a VW Transporter minibus in the fleet some years ago, is currently on a Mercedes CLS350 coupe. 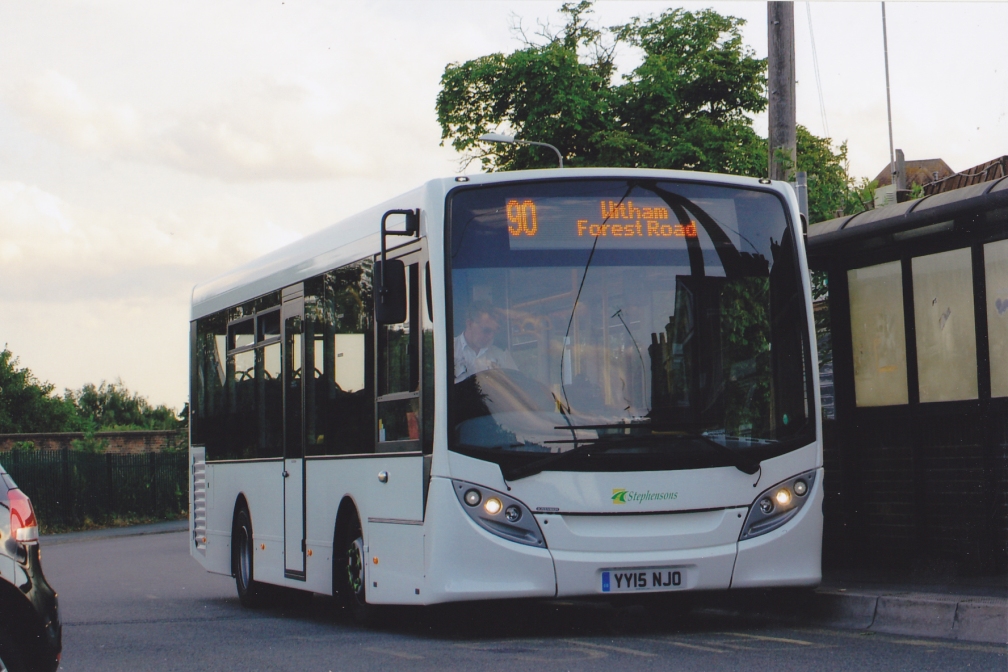 All white short ADL/Enviro 200 YY15 NJO has been noted, ex Holmeswood Coaches in Lancashire. It is pictured, above at Witham on 17th July.

Above: Dennis Dart SLF/Plaxton Mini Pointer no 413 at King Edward Way, Witham on 24/7/15. It is on a cross town service which was originally the province of Eastern National.

The first of the ex Nottingham Scania Omnidekkas to enter service, was YN53 CFU.

UNO.
This operator´s first TfL contract commenced on 25/7/15.
Route 383 (Barnet-Woodside Park) was gained from Metroline. New for this are 8.9 metre ADL/E20D nos 601-4(YY15 NKA/C/D/E). They are short 25 seaters, and painted red.
Prior to Metroline, the 383 had been operated by another Hertfordshire independant; Sullivan Buses.