Welcome to the November, 2015 edition of Busmopolitan.
The picture of the editor (above), with Hedingham Omnibuses Volvo Olympians nos 92 and 76, is significant, because the marque will be phased out in 2016; in advance of the DDA deadline for this type of bus from 1st January 2017. Tollesbury and Kelvedon depots are the last to operate Olympians, and they will be replaced by low floor Dennis Tridents. The view was taken at Kelvedon on 18th November.

At First, hot on the heels of the new depot at Colchester, are some brand new buses. These are Wright Streetlite MAXs, and are the first “out of the box” deliveries to Colchester since 2003.

Stephensons has completed its takeover of Braintree area routes from First, which followed the closure of the former’s local depot from 1st November. Stephensons has been using a selection of saloons drawn from around its fleet, pending the arrival of new vehicles.

The Arriva ‘MAX’ brand has come to Essex; with it being launched in Southend on 30th November.

Big changes have been announced to certain bus routes across Essex, following a county council review. These would take effect from early April 2016.

Townlink at Harlow, has been the subject of a Public Enquiry (PI). This was connected with non operation of services, and not having a nominated Transport Manager.
It’s predecessors have likewise tussled with the authorities, in the past.

And on the railway, it’s the leaf fall season – and a farce. For a large part of November, buses had to replace trains of the Sudbury and Felixstowe branch lines, due to a shortage of diesel multiple units (dmus). The reason ? A large number of the dmus had flat tyres, due to the railhead conditions. An alternative theory was that they were “too lightweight” (!).

156418 has been named ‘ESTA 1965-2015’.
Buses/coaches replaced trains on the Marks Tey-Sudbury and Ipswich-Felixstowe routes on 11th to 22nd November, due to a shortage of Class 153 and 156 DMUs. This was due to several of these diesel units suffering flat tyres, due to poor track and adhesion conditions.
Operators noted on replacement road services, included Dons, Ensignbus, First, Flagfinders, New Horizon, Panther Travel, Regal and Simonds of Diss.

AIRPORT BUS EXPRESS.
A second route is A21 (Stansted-Stratford-London Bridge-Victoria). Easybus tickets are valid on this service, following the latter’s exit from Stansted Airport.

ARRIVA KENT THAMESIDE (NETWORK COLCHESTER).
From 8/11/15, there were fare changes to the Colchester Park and Ride, coinciding with the introduction of new ticket machines at Cuckoo Farm terminus.
The introductory fee has ended. Charges are now £3 per adult, £1 per child and free for under-fives. Concessionary and Blue Badge holders travel free after 0900, subject to registration.
Ex Fastrack Volvo B7RLE/Wright 3815 (GN07 AVB), has gone to Southend, after temporary use at Colchester.
Withdrawn are Dart/SLF/Plaxton Pointer 3191 (P191 LKJ) and SLF/Caetano 3411 (HX51 LRO).
Sunday/bank holiday service 70 (Colchester-Braintree), has gone over to saloon operation, ex double deck.

DLR.
There was industrial action on 3rd and 4th of November, with replacement buses required. Contribution from local operators, included Beestons, Ensignbus, Panther Travel, Regal and Trustybus.
They boosted TfL routes at peak times; including 108 (Stratford-Lewisham) and 474 (Canning Town-Manor Park).

EASYBUS.
Service EB2 (London Old Street-Stansted Airport), was withdrawn from 14/11/15.
Thus Easybus no longer runs into Stansted, and instead tickets are valid on Airport Bus Express A21.

Van Hool Astromega JEV 245Y has been named ‘In memory of Paul Francis Dipper 1958-2015’. Paul was well known in the bus community of south Essex and East London; being both a professional busman and enthusiast. His memorial vehicle is pictured (above), at Witham on an Abellio Greater Anglia e-rail, on 25th November. 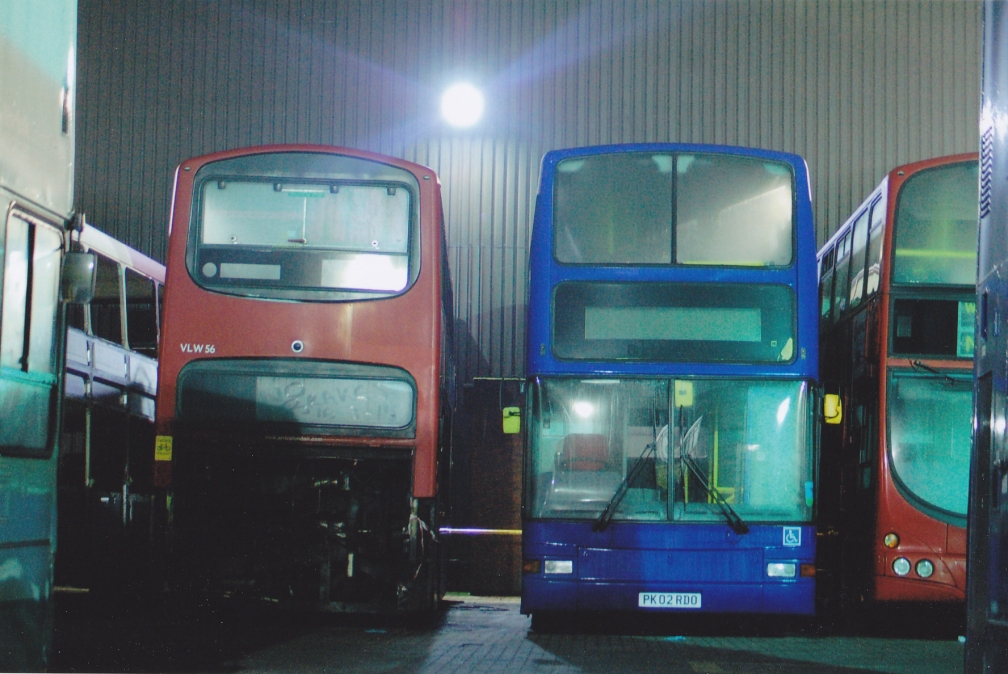 Braintree depot closed from 1/11/15. It has been replaced by an outstation, initially on the same site. This garage, on Springfield Drive opened as recently as 2011. The yard next door was the previous depot, between 2005 and 2011, which in turn had taken over from the (now demolished) former Hicks site at Fairfield Road, in Braintree town centre. The “new” site has been offered To Let, by its landlord, Braintree District Council. The outstation allocation started with Volvo B7TL/ALX400s 32480/3/4/5, 32651/2 plus Solo 53137, as a crew ferry. Vauxhall Zafira FG14 WUV has since taken over on BE staff shuttles.

With the end of First routes 131/2 and the commencement of Stephensons 38/A, there were also changes on the Chelmsford-Witham-Colchester corridor.
47 (Chelmsford-Broomfield) was replaced by 72 (Chelmsford-Witham (New Rickstones Academy)). However, 47 continues in truncated form, as an Essex CC funded Chelmsford-Springfield Sainsburys route, at reduced frequency. 71 (Chelmsford-Colchester) has also changed. The 71A variant has ceased, as 72 now covers the Boreham Village loop, and 70 the Tollgate Retail Park at Colchester. Aditionally, there is a new 71B from Chelmsford to Chelmer Village (M-F). This has partly replaced the old 72 service.
Also from 1st November, Colchester route 61/A (University-North Station) was extended to/from Wivenhoe in the east, and Highwoods in the west. There was a slight frequency reduction on 65 (Highwoods-Stanway) as a result. 106 (Colchester-Harwich direct) ceased. This was basically used for positioning journeys for first and last buses to/from Harwich, after Harwich depot closed in June 2014. Early morning workings on 66 (Colchester-Rowhedge), now start at Old Heath (Whitehall Road), rather than running light into town. This is achievable due to the location of the new Quayside depot. 67 (West Mersea-Colchester) ceased to run beyond the town centre (Head Street) to the General Hospital, as this is now covered by an increased 61 and 65.
Then from 16th November, First regained 73 (Maldon-Boreham-Chelmsford) on Essex CC contract, after Stephensons pulled the plug – having only run the 73 commercially since 1/9/15. 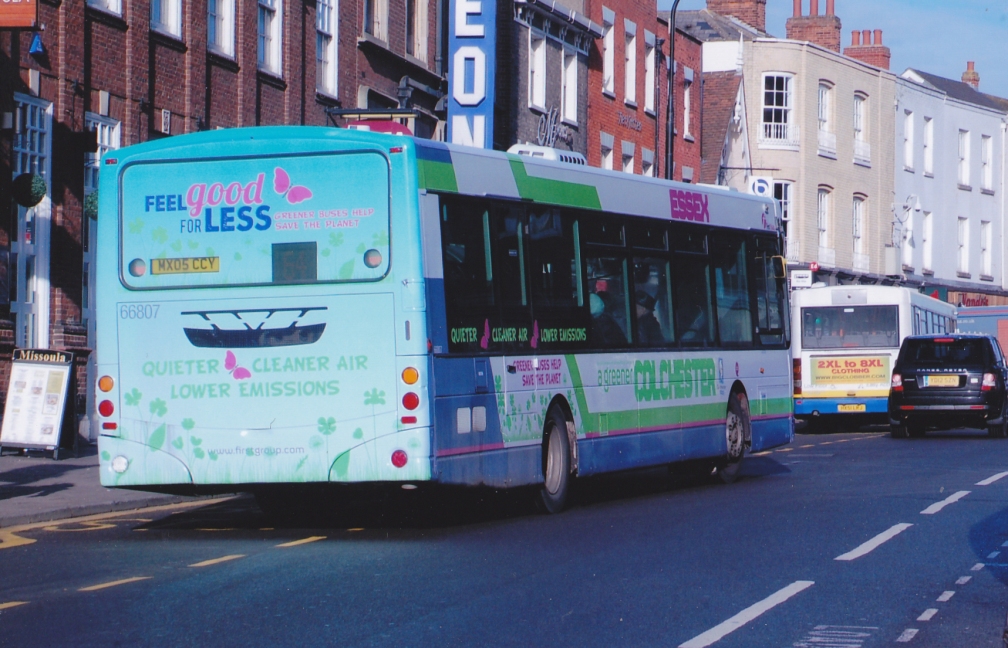 Another Vauxhall Zafira staff car is FG14 XHY, at CF. 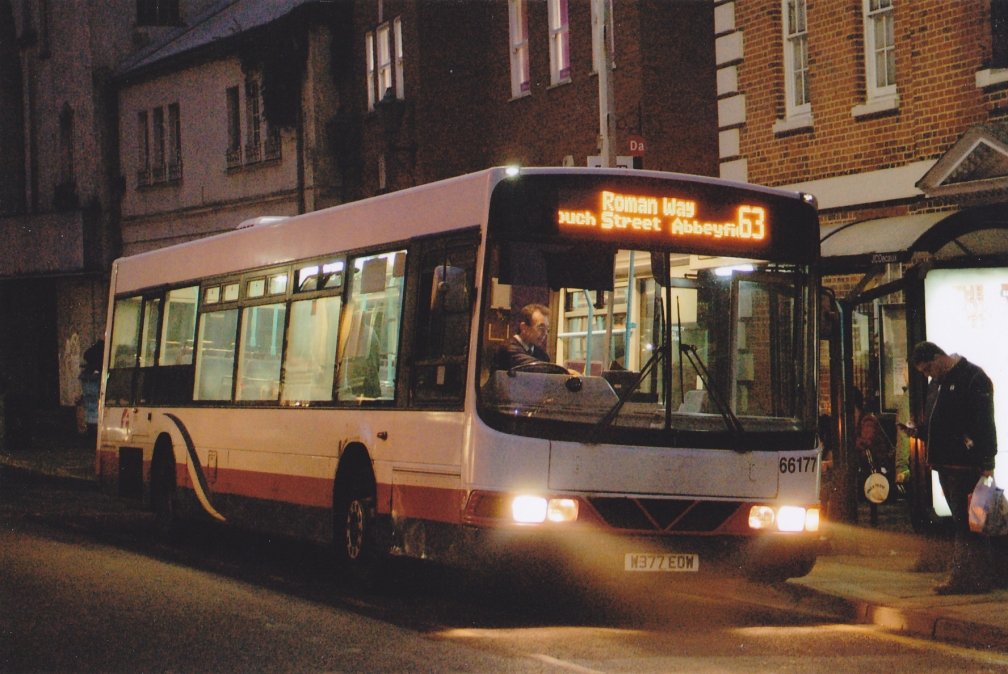 Above: Volvo B10BLE/Wright 66177, picks up at Crouch Street, Colchester on 2/11/15. It is unusually on route 63; normally the preserve of Wright Streetlites. Local bus personality David Edwards is driving.

Another Plaxton President bodied Volvo B7TL from Chambers is 577 (W518 WGH); now at Sible Hedingham (HD). It was pictured (above), in Chambers days at Southway, Colchester in January 2015; on a school contract.
Scania Omnidekka 1520 (YN06 JYD), has entered service from Clacton (CN).
Dennis Trident/Alexander ALX400 737 (T107 DBW), returned to service at Tollesbury (TY) in late November.
Volvo Olympian/NC 66 (P602 CAY), is to be donated to a school, for static use – after parts recovery.
Ford C Max staff car GU09 MTF has transferred to Konect at Dereham.
Ford Focus estate car GP07 HTL has been sold. 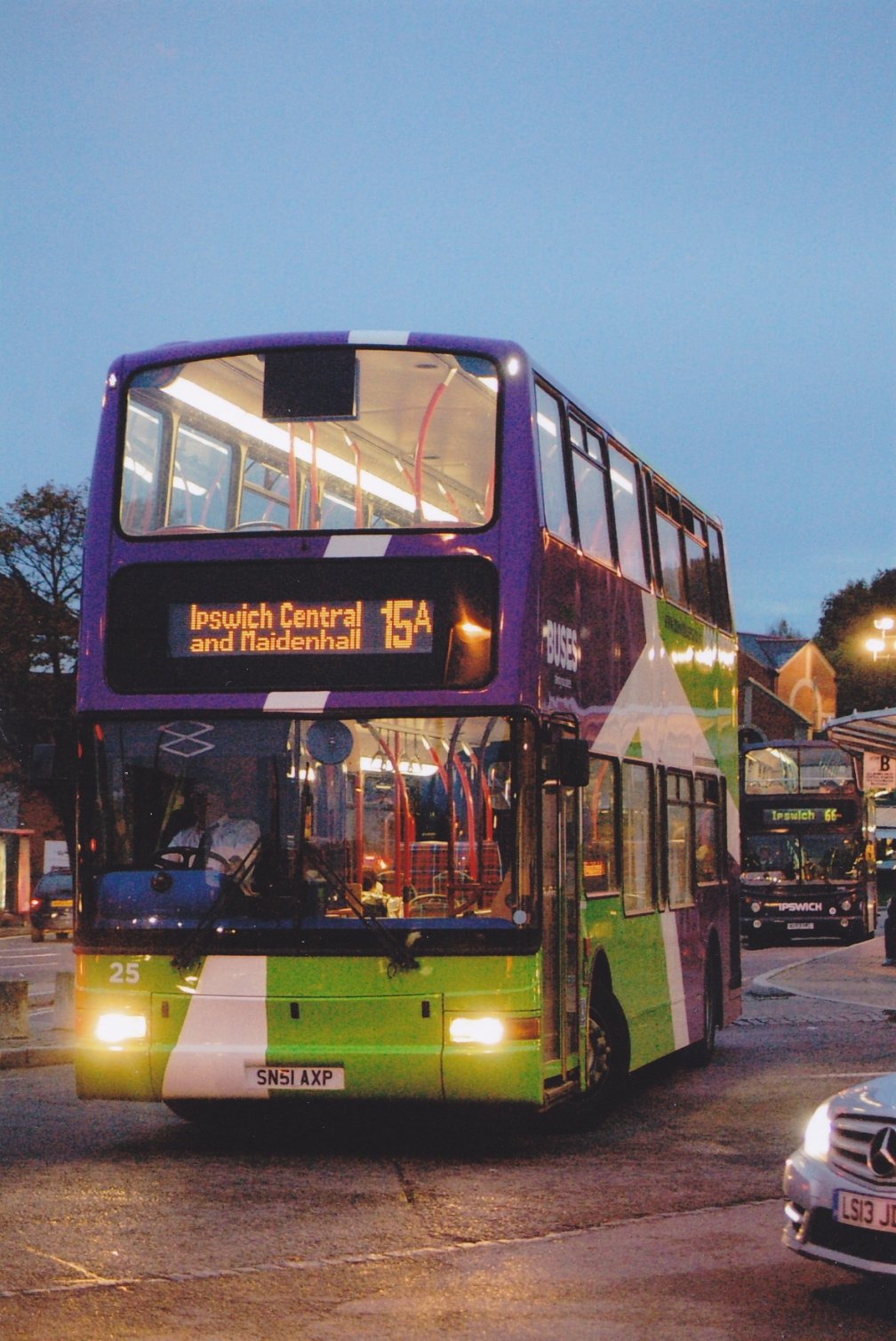 Above: Ipswich Buses no 25 is one of the Dennis Trident/Plaxton Presidents recently acquired from Lothian Buses. It is pictured departing Ipswich Railway Station on 30/10/15.

JR EXECUTIVE TRAVEL, COPDOCK.
Has been sold to two members of its existing management team.

LONDON CENTRAL.
All electric Optare Metrocity demonstrator OE1 (YJ65 EOV), is being trialled on TfL108 (Lewisham-Stratford). It is allocated to the NX175 M-F peak hour duty.
An interesting arrival from London General is Mercedes Citaro MEC1 (BG09 JJK). It too, was observed on the 108, on 8/11/15. It returned to London General later in the month, but other Citaros are due.
The appearance of the Mercedes could be an answer to the capacity problems, which have afflicted route 108 in recent months. Due to the Blackwall Tunnel, and physical restrictions at Bromley By Bow; the choice of larger buses is somewhat limited.
Also, the southern terminus of 108, has temporarily moved from Lewisham Station, Loampit Vale to Lewisham High Street, Lewis Grove. 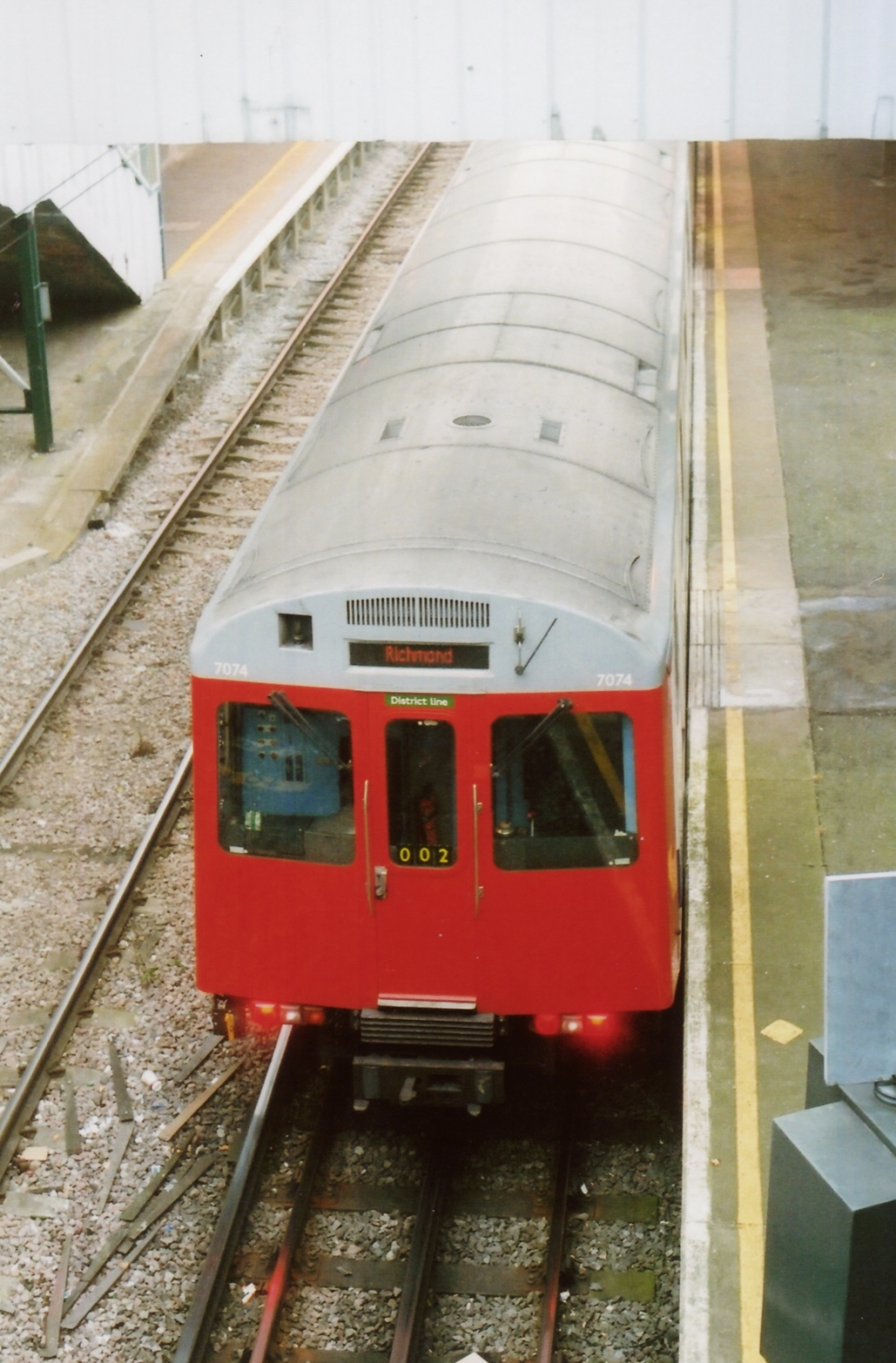 Below: In original condition, D78 7094 tails a Wimbledon to Tower Hill service, departing Monument in December 2000. 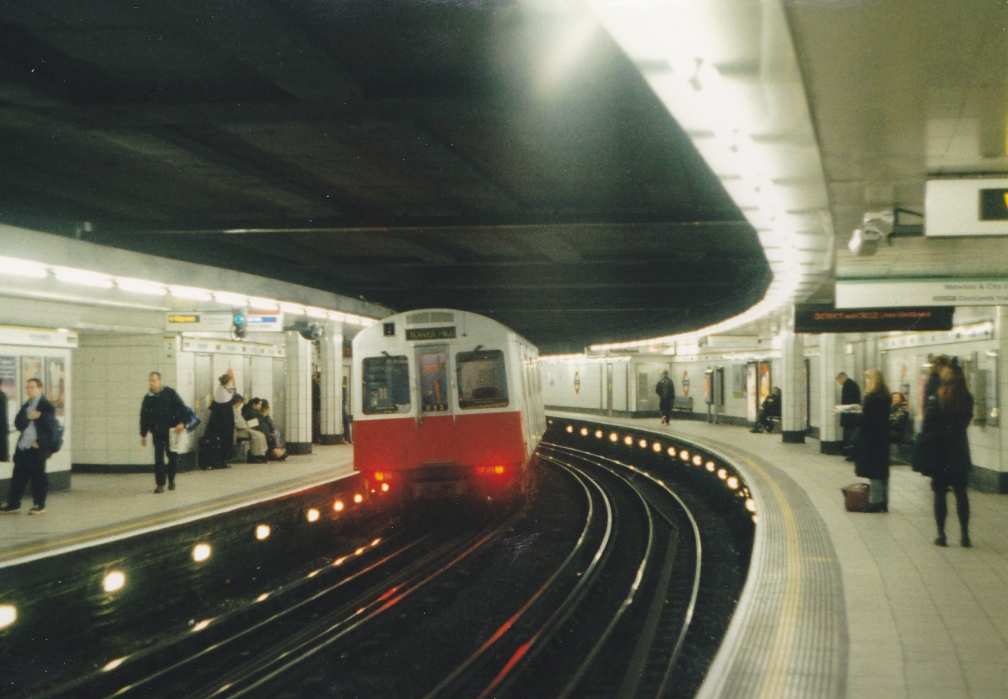 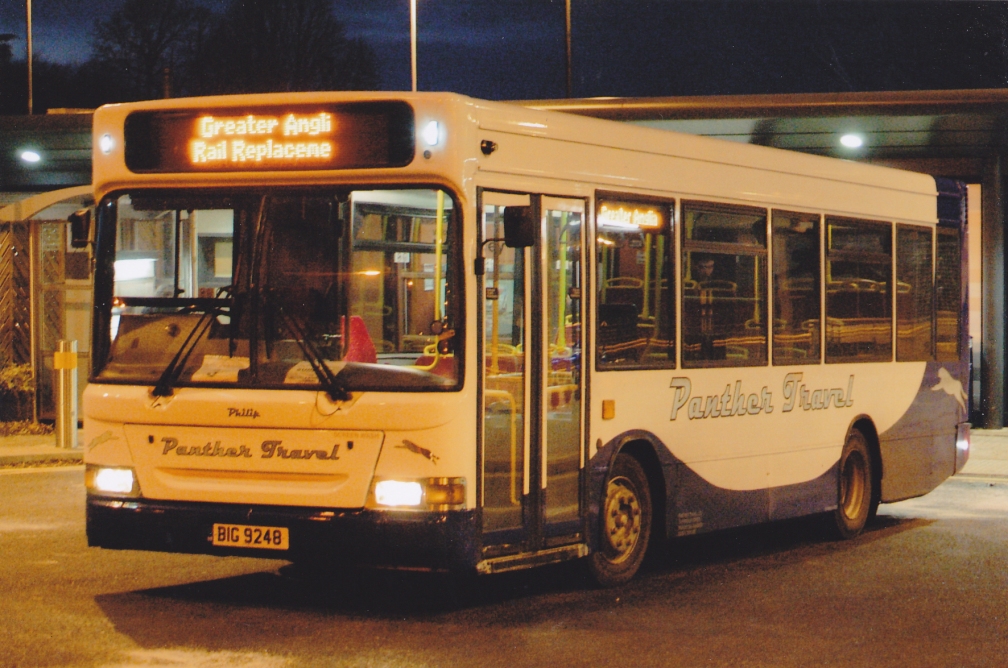 Ex Hedingham Dart SLF/Plaxton Mini Pointer W339 VGX, has joined the operational fleet as BIG 9248, and is named ‘Philip’. The Volvo B6/Plaxton Pointer which previously bore the BIG 9248 mark, has reverted to its original identity of M832 CVG, and passed to Turners of Wickham St Paul. This was also a one time Hedingham bus.
Acquired from a preservationist, is former Southdown ‘Queen Mary’ NC convertible open top bodied Leyland Titan PD3/4 BUF 426C.
Dennis Javelin/UVG BIG 8796 has been offered for sale.
Volvo B10M/VH VLT 177 has been re-registered back to P521 PRL, and sold to Eagle of Castle Acre, Norfolk.
Withdrawn Leyland Olympian/ECW CWR 512Y, is now a seat store at Matching Tye site.
The Mercedes Sprinter engineers’ van, KY08 NMX – is re-registered to AD08 PAN.
Dart/Dash BIG 8843, has been loaned, short term to Malcolm’s Bus Service, Clacton; on various occasions.

The replacements for First 131/2 Braintree to Witham routes, commenced on 2/11/15.
They are numbered 38/A and are effectively extensions of Witham town services. Dart SLF/Caetano no 453, was pictured (above), at Collingwood Road, Witham on 13/11/15.
38 runs as Halstead-Gosfield-Bocking-Braintree-Freeport-Silver End-Witham-Allectus Way.
38A operates as 38, but via Stubbs Lane in Braintree instead of Freeport.
The Bocking-Braintree section replaces that part of First 21/A, although First will still work that as an Evening/Sun/hol Essex CC contract.
The 38/A are commercial services, on a combined 30 minute Headway, day times Mon to Sat. The Eberneezer Close to Collingwood Road section of 38 in Witham, was renumbered 40, and subbed to Arrow Taxis of Maldon, from 2nd November.
Dart SLF/Mini Pointer 417 (EU07 FRN) and short ADL/Enviro 200 421 (EU09 NYO), have moved from Rochford to Haverhill.
Further movements to Braintree from Haverhill, are of Dart SLF/ALX200 435 (LX51 FGE) and SLF/Super Pointer 455 (EG02 NZD).
Dart SLF/Super Pointer 459 (GU52 NKD) is back in use, after collision repairs.
Various buses from Boreham depot have also appeared on the Braintree services, since the start of November. Noted have been Solo 322 (EU07 FVM); SLF/Caetanos 453/4 (HV52 WTC/E); SLF/Pointer 459; ADL/E200s 422 (EU60 CAV), 423 (EU64 CVT), 464/6 (EU62 FDF, FBO). One line is run from Boreham, so buses at Braintree site can be swapped for maintenance. From 30th November, a 38A am peak working, became double deck.
Operation of commercial service 73 (Maldon-Boreham-Chelmsford), ceased after 13/11/15. First Essex took it back, under Essex CC contract, from 16th November.
ADL/E200 465 was the regular route 247 bus for much of November.
3 (Colchester-Hythe) and 506 (Colchester Schools-Heybridge), are now double deck worked, ex saloon.
Short ADL/Enviro 200 YY15 NJO is now in stock, ex loan and has fleet no 427.

TALISMAN COACHLINES, GREAT BROMLEY.
CAZ 2747 is a Leyland Royal Tiger Doyen, ex Washington Coaches of Philadelphia; that’s the one in Tyne and Wear, rather than the USA !