Welcome to the July 2016 edition of Busmopolitan.

Tollesbury depot of Hedingham Omnibuses, closed after service on 22nd/23rd July. This ends an era, as there had been a bus garage in this Essex riverside village since 1917, when G W Osborne started a service between Tollesbury and Colchester via Birch; a forerunner of the present day 92. Osbornes sold out to Hedingham in 1997.
The premises on New Road dated from 1965, but the site had been used to berth buses for many years prior to that. The picture (above) shows TY driver Brian Tedgerdine on one of the last commercial workings. Full details of the resultant traffic and vehicle changes are explained below.
And Go-Ahead Blue Triangle has vacated its depot at Rainham. Acquired with the Blue Triangle business in 2006, the premises at Ferry Lane had been extensively upgraded, but were still limited by the size of the site.
And there have been ends of eras in Suffolk, with the closure of Soames Coaches and the abolition of middle schools (except 3 independant academies). Soames has traded out of Otley for some 90 years, and its demise was only due to the lack of a successor to continue the business. The middle school finale will see changes to many school bus contracts from September. 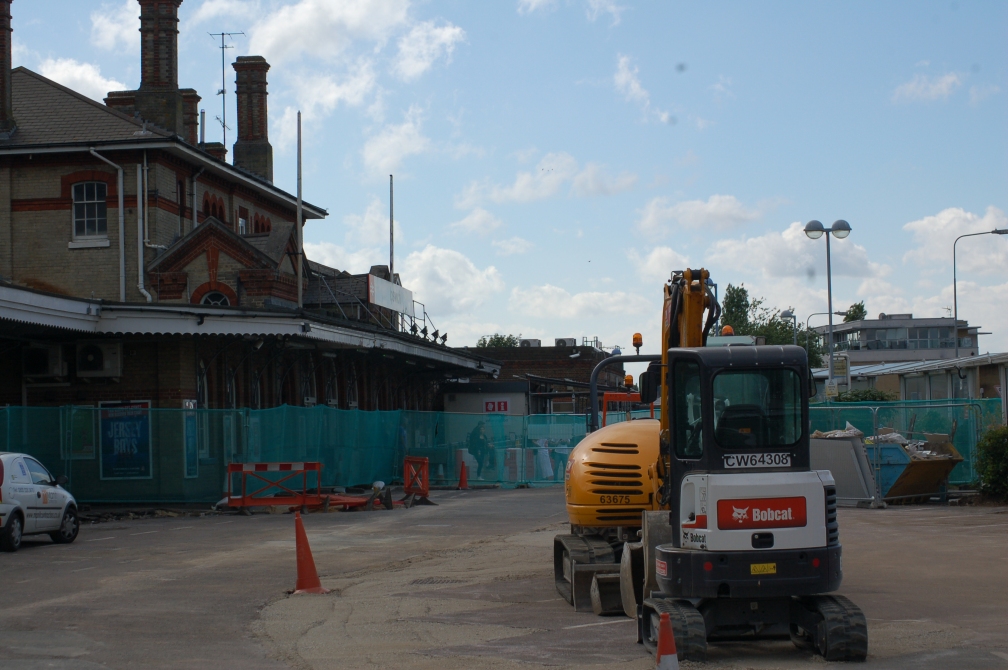 Ipswich station is undergoing major works. The bus stops and taxi rank are being swapped over, with the buses stopping immediately outside the station building in a new circular bus station. The taxis are where the buses used to be. Inside, the booking hall has been relocated, along with some retail outlets. The picture (above), was taken on 10th July.
Also, a new shelter has been erected on platform 2 at Marks Tey. This stretches from the footbridge to the waiting room. The old retort building has been dismantled, after having lain derelict for some time. It is understood that the brick have been salvaged for use at the Chappel and Wakes Colne Railway Museum. It was originally used to produce gas for the lanterns of Marks Tey station.
The derelict station buildings at Alresford, Kirby Cross and Weeley have been sold to Tendring District Council for the nominal sum of £1 each. This follows local resistance to the proposed demolition of the structure at Alresford. AGA stated that it would not be economically viable to restore these Victorian buildings, which date from the opening of the Colchester to Walton on the Naze line. Hythe station had an identical building which was pulled down in 2009 and replaced with a “bus shelter”, when that station was modernised with extended platforms.
The hot weather in mid July caused operational problems. On 20th July, an 80 mph speed restriction was imposed (at Shenfield), and 14 services through there were cancelled as a result. EMU 317501 has received the new livery, along with MkIII FO 11085, and TSOs 12034/66, 12130.
EMU 321364 has had its end unit numbers moved from the valence to the solebar.
They are in black on a white background and are of a smaller font. The Class 321s are being internally refreshed.
MkIIIa RFM (Restaurant Buffet First Modular) carriage, no 10200 has been withdrawn for conversion to a TSOB Tourist Standard Open Micro-Buffet. This left 10212/29. RFM 10247 has become TSOB 10417. TSOB 10406 has received Abellio livery, leaving just (off lease) 10241/63/65 in the old ONE scheme.

Above: Rare footage of Dennis Dart SLF/Plaxton Pointer no 3327; then recently moved from Harlow to Colchester; ascending North Hill in Colchester, on 1/7/16. 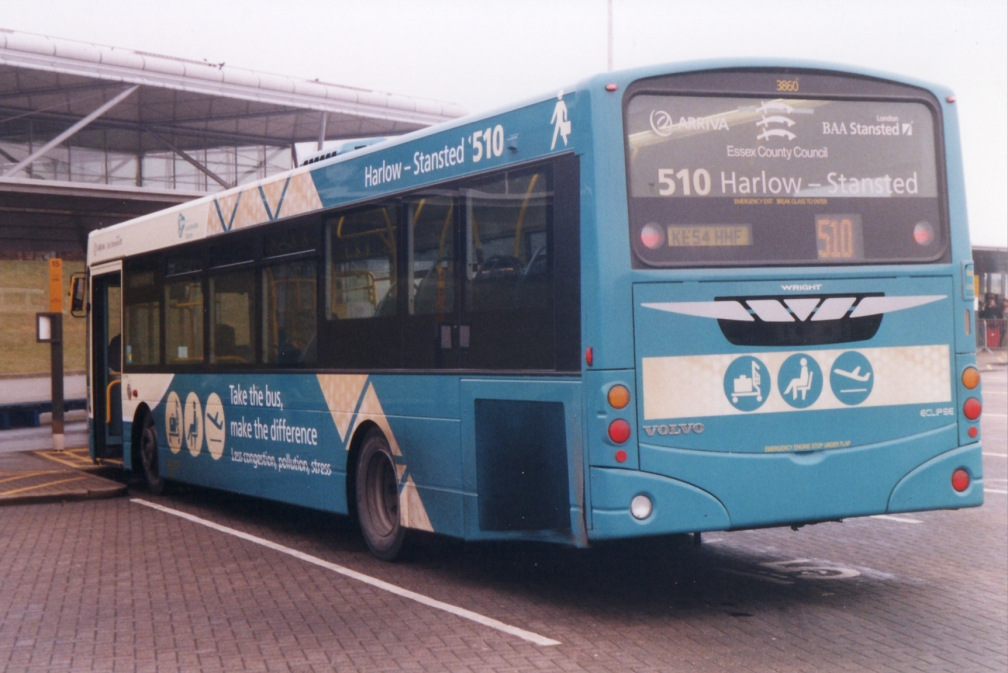 BLUE TRIANGLE.
Rainham (BE) garage closed after service on 1st July, with all work moving to the new depot at River Road, Barking (RR). BE remained in use for overflow parking, however.

Above: A pre Go-Ahead era view of Rainham base; in September 2004.

COBALT AERO.
This is a new Cypriot airline which runs a Larnaca to Stansted service; using Airbus A320s. It is the second air carier from Cyprus to be formed, after the dissolution of Cyprus Airways in 2015. The other being Tus Airways.

CROSSRAIL.
The first of the Class 345 EMUs, no 345001 was launched to the press at Bombardier, Derby on 29th July. 66 are ultimately due for the ‘Elizabeth Line’, with the first to enter public service from May 2017.

DBS.
All of the Class 66 EMD diesel electric locomotives have been bought from the leasing company.

DOCKLANDS BUSES.
Withdrawn are Volvo B7TL/Wright Geminis WVL94/95 (LF52 ZNG/H). They have gone to store at the Belvedere (BV) site of London General. 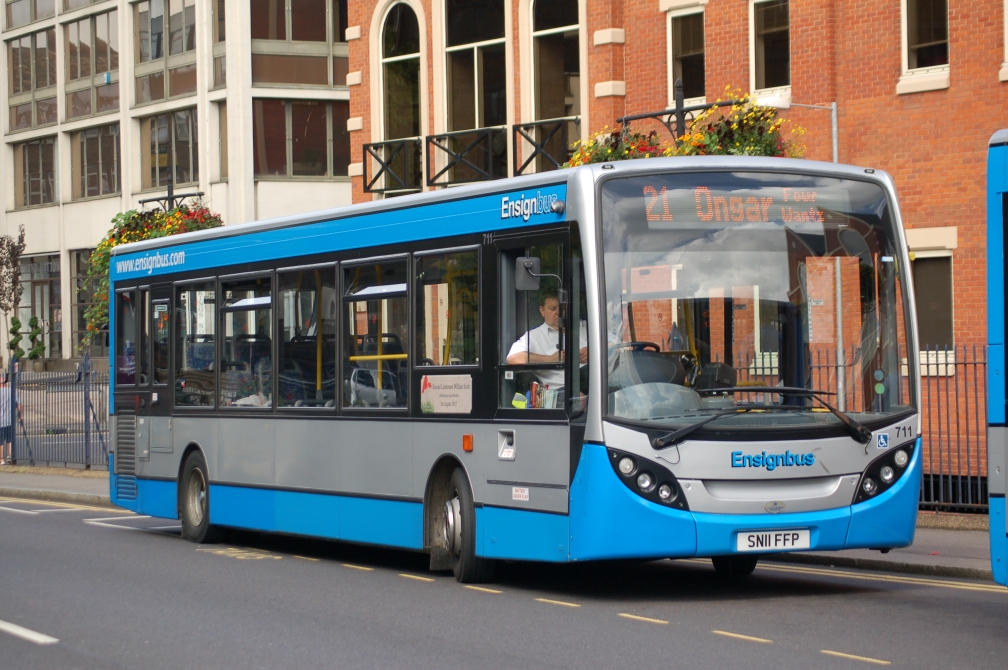 Above: Ensignbus now runs the southern part of the former Townlink service 21. ADL/Enviro 200 no 711 was at Brentwood railway station on 16/7/16. 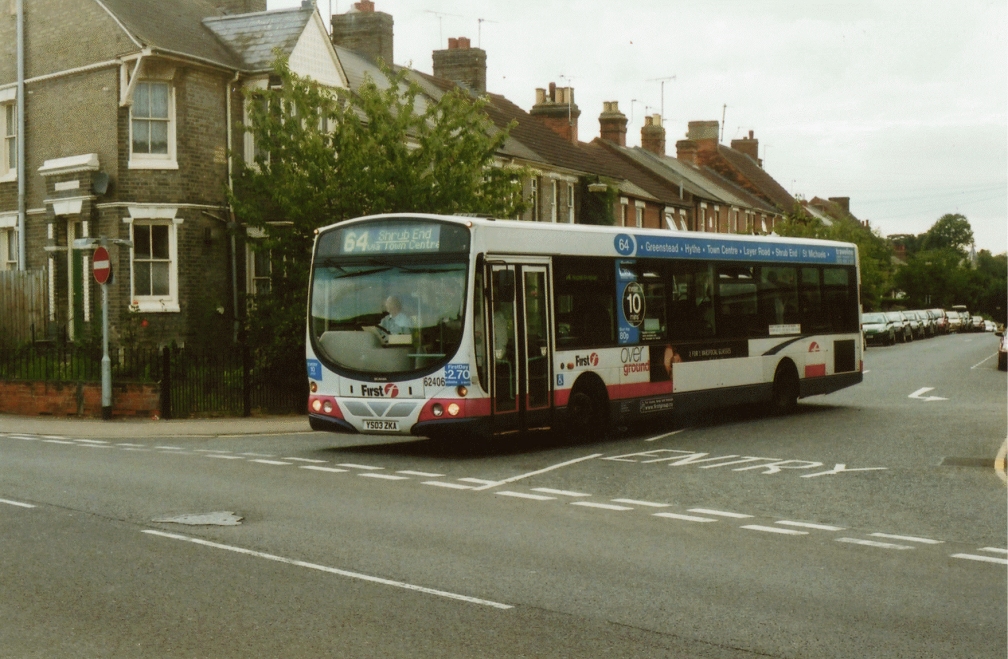 The driver of a lorry, involved in a serious accident with a First Essex bus at West Mersea last September, appeared at Colchester Magistrates Court on 30th July; to answer 6 counts of causing Serious Injury by Dangerous Driving. Philip Last, aged 52 of Great Yarmouth, entered no plea and the case was committed to Ipswich Crown Court on 23rd August. Mr Last was released on unconditional bail until then.
The incident happened on 26th September 2015, when a DAF XF articulated low loader, operated by Cowles of Lowestoft, shed its Burrell steam traction engine load, onto a First Essex Scania/Wright on East Road, West Mersea – crushing the front offside of the bus. The bus driver and 5 passengers were badly injured and the bus written off. Mr Last had been arrested at the scene and was charged later that day.

Above: Line up of Class 66 diesels and a Class 86 electric loco at Ipswich Station sidings on 10/7/16, with Abellio Greater Anglia Class 153 DMU and Class 321 EMU stock to the left.

GARDNERS, CHELMSFORD.
The depot has moved from Boreham to Rettendon. 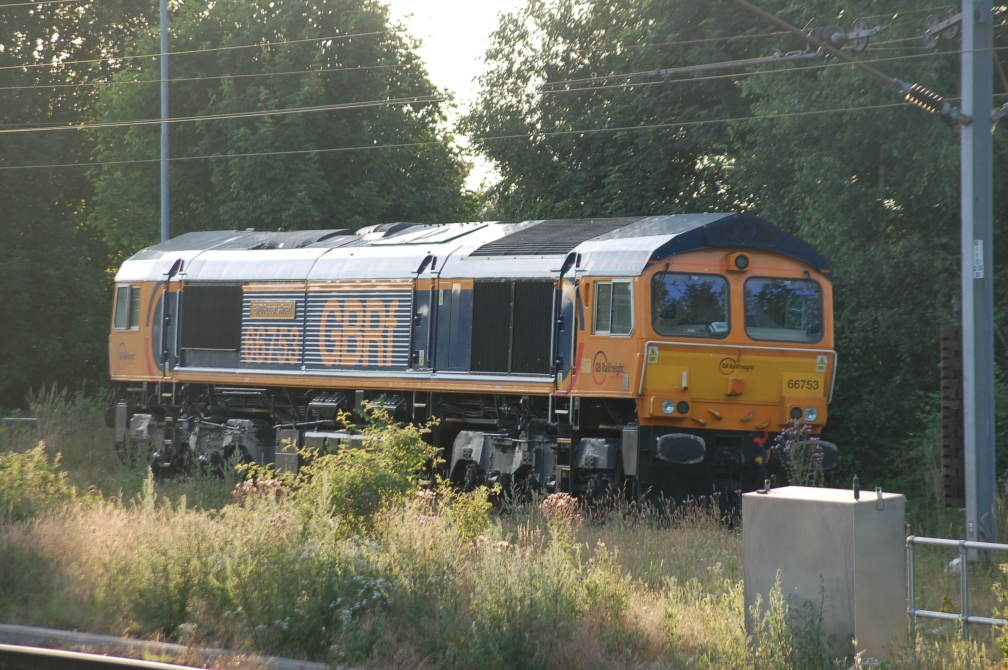 GRAHAM’S OF KELVEDON.
Two years after it was withdrawn, Mercedes 711D/Onyx P2 BST remains on site. 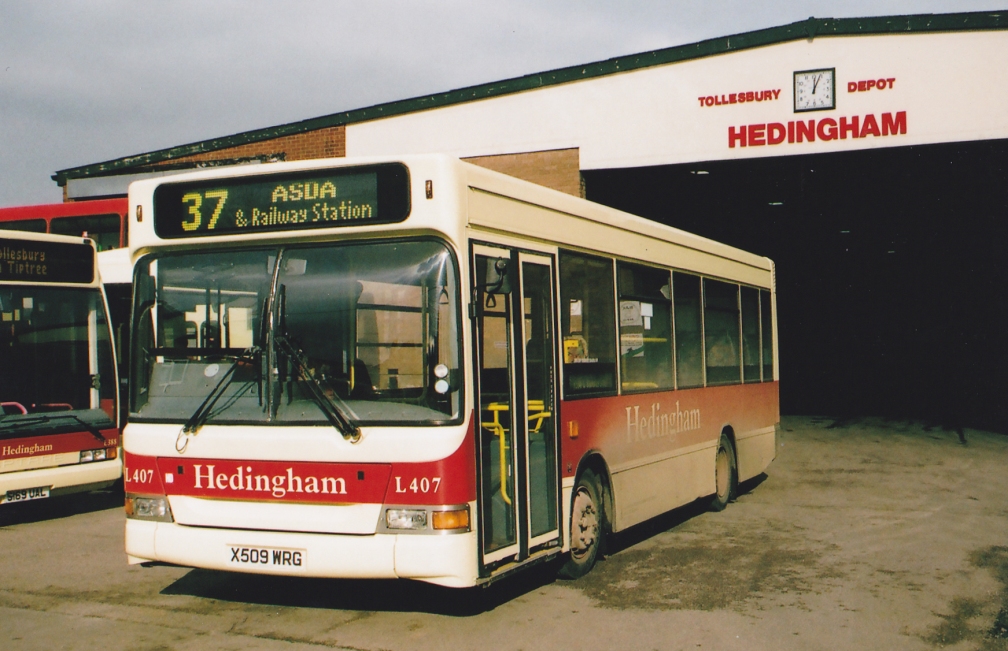 Above: Dennis Dart SLF/Plaxton Mini Pointer L407 outside Tollesbury depot on 20/2/13. It is blinded for Essex CC supported South Woodham Ferrers town service 37. This had previously been operated by Jacksons of Bickacre and then NIBS of Wickford. After Hedingham, the 37 was contracted to Amber of Rayleigh, but from April 2016 became part of new First Essex route 94.

Above: J838 TSC at Aingers Green in May 2009; en route from Clacton depot  to Colne School at Brightlingsea.

Above: Volvo Olympian no 73 at Maldon Road, Colchester – on a Tollesbury bound 92 on 17/3/15. The bus had recently been transferred from HD to TY when the picture was taken, and the destination display was subsequently repaired.

Above: Leyland Olympian/Alexander RL no 60, on service 95 at Tollesbury Square on 21/11/13. It still carried its old fleet no at the time of the photo. This bus is now in preservation. 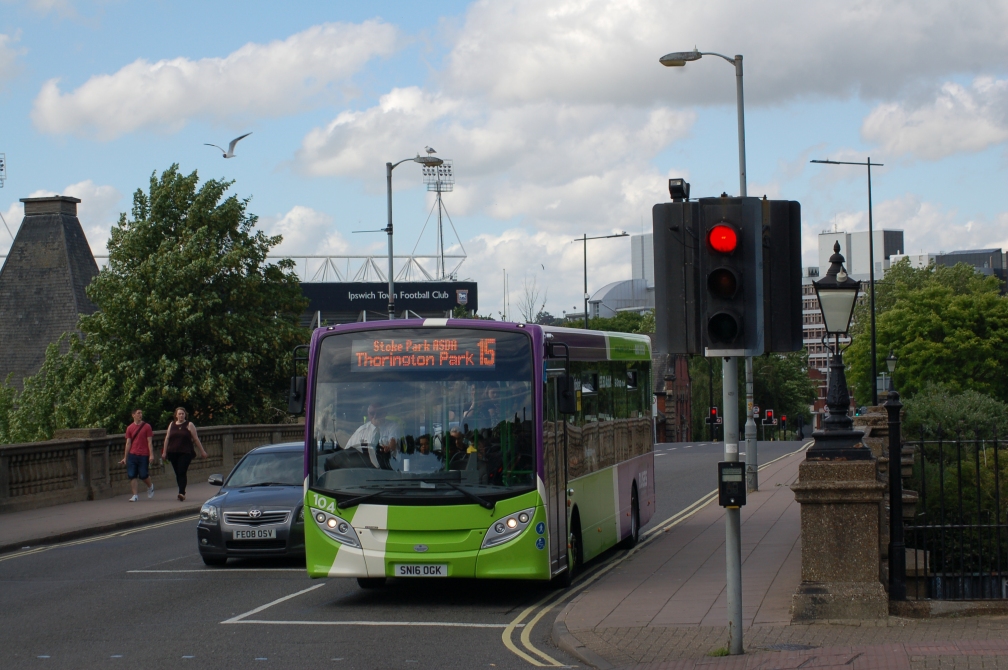 Above: One of the recent “classic” ADL/Enviro 200s; no 104 was seen at Princes Street on 10th July.
Below: No 103 passes the futuristic Willis building on 9th July. (Simon Austin).

Above: A view of the LOROL Barking to Walthamstow section of the rail replacement to Gospel Oak. On 30th July, Ensignbus Volvo B7TL/Alexander ALX400 no 907 (left) arrives at Barking,  as Arriva London North ADL/Enviro 400 T157 departs for Walthamstow Central, for connection with the LUL Victoria Line. This provides a link to the other RRP from Tottenham Hale. 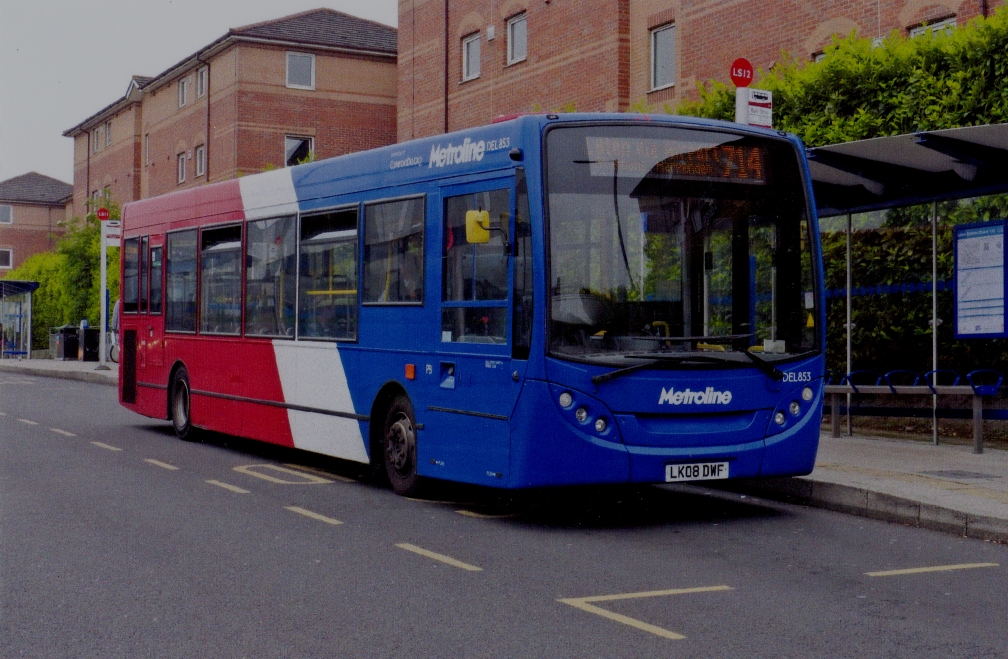 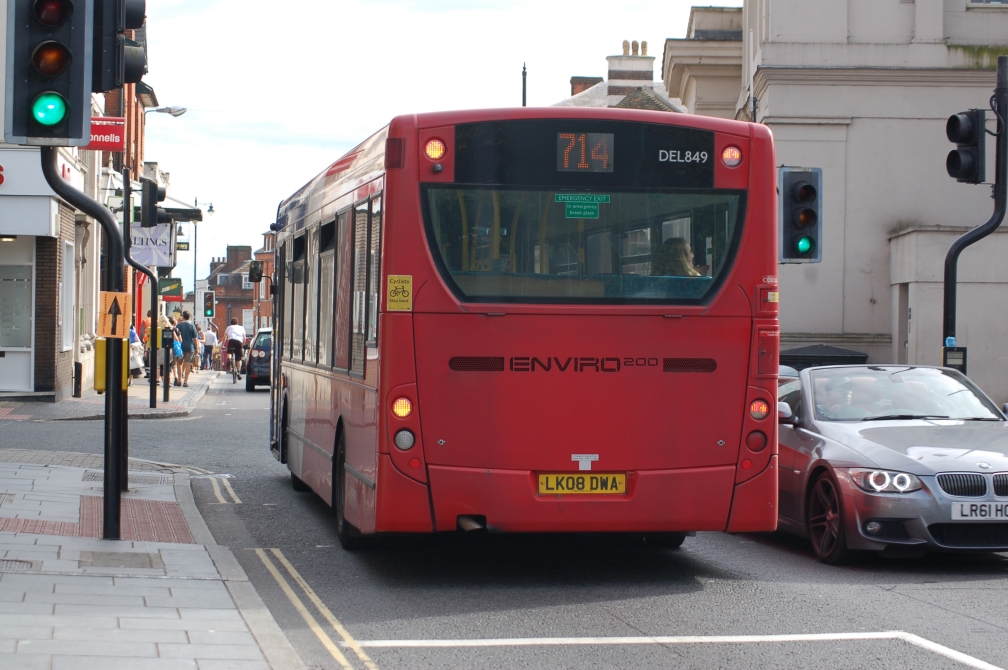 Optare Solo YE52 FHL departs Cambridge Railway Station on 17th July, on the Sundays/holidays only Cambridgeshire CC 132 Cambridge-Saffron Walden service.
This is covered at other times by the commercial Stagecoach Citi 7, but on Suns/hols Citi 7 only runs between Cambridge and Sawston. 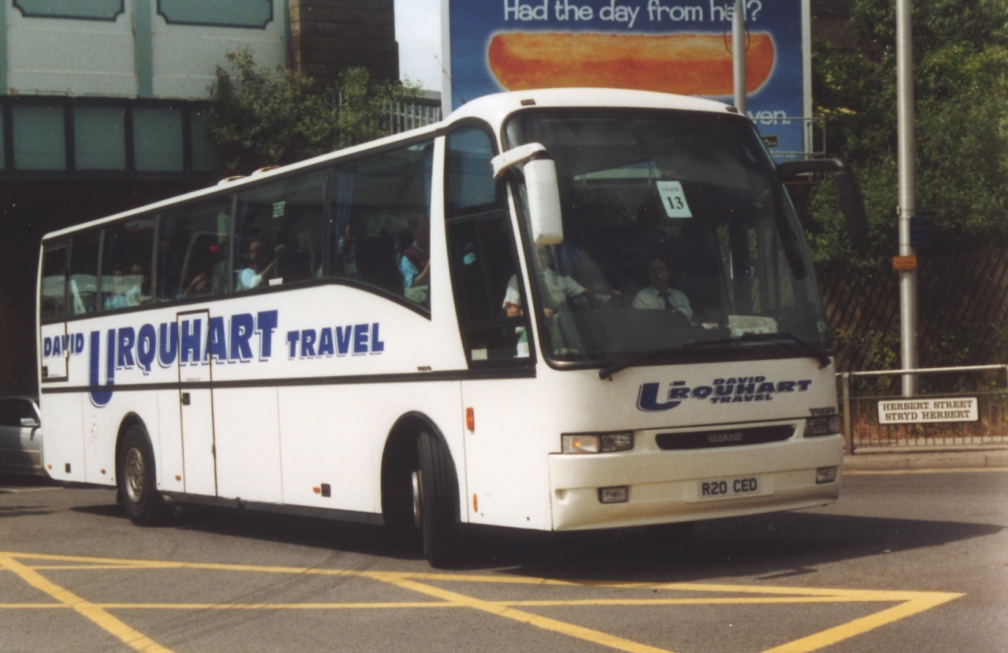 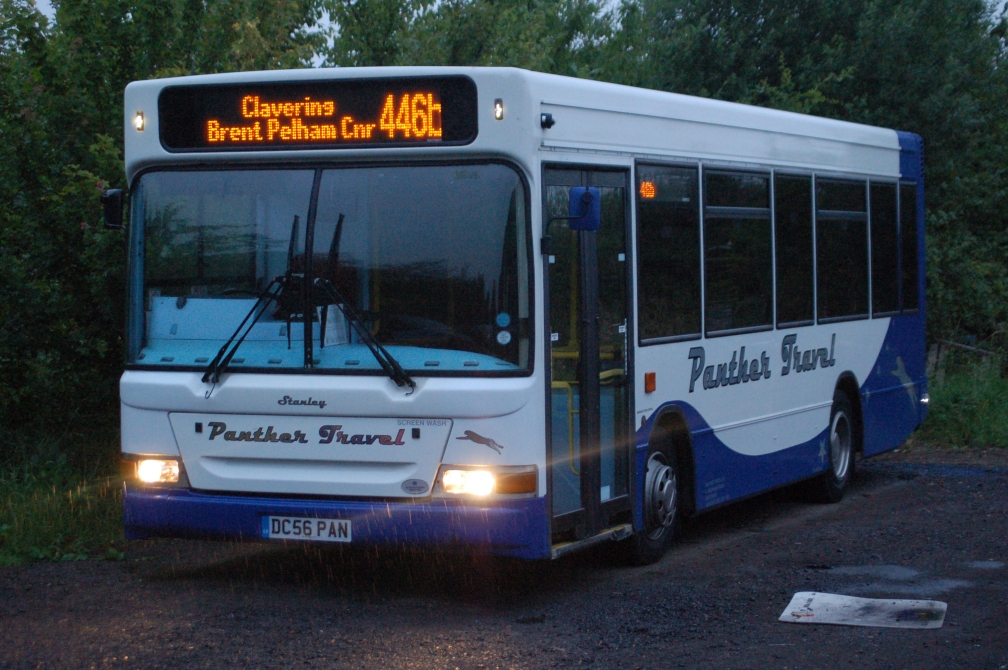 Leyland Olympian G296 UYK is now registered BIG 9248. It was pictured at Witham on 25th July.
Volvo B12B/Plaxton Panther DC04 PAN is re-registered back to YU04 XFC and has passed to Barrett of Nantwich.
Ford Transit 16 seater DC52 PAN and Leyland Olympian/Alexander RL BIG 7596, have been offered for sale. Previously sold Volvo B7R/Plaxton Prima BIG 6002 has been put up for sale again by its subsequent keeper Lovett of Coleshill; and repainted burgundy red.
Olympian BIG 7596 was withdrawn at the end of the school term, and re-registered back to F639 LMJ, as pictured below.

Long term stored Leyland Olympian/Alexander RL K518 ESS is being cannibalised (above). Other long term laid up vehicles are Leyland National Greenaway GUW 452W and Leyland Olympian/ECW C73 CHM. All are at Matching Tye workshop.
All Stansted based minibuses now park at Airport House. This follows the closure of the car park on First Avenue, for conversion to a ‘meet and greet’ facility.
The Stansted Northside Shuttle ceased to serve the coach station after 29/7/16. It was diverted to Enterprise House from 1st August.
Ipswich outstation has had to be temporarily relocated to the car park on West End Road, due to building works at the railway station.

This Turkish low cost carrier serves Stansted from Istanbul and Tehran. Boeing 737-800 TC-ASP was seen at Stansted on 21/5/16, on a service to/from the Turkish capital.
Turkey is of course currently in the world spotlight, following the failed coup.
Arrivals are Boeing 737-8AL TC-CRB and Airbus A320-251 TC-NBA.

STAGECOACH EAST.
There has been another derailment on the Cambridge Guided Busway. Stagecoach Huntingdonshire Volvo B8RLE/Wright 21310 (BF65 HXZ), left the southbound track at Trumpington, early on 7/7/16. It was running light to take up service and there were no injuries. The busway remained open during the day, and the stricken vehicle was recovered after the end of traffic.
This accident happened virtually opposite the site of a similar crash in February 2016, in which there were several casualties. The location is where there is a short guided section, between two unguided intersections where an ordinary road is crossed and where the busway becomes single track to pass beneath a bridge.
The Uni4 service ceased after 22/7/16. Whippet began a new venture the following day.

Above: ADL/Enviro 200 36041 seen on an eastbound Uni4 in April 2010. Orchard Park was a (then) new housing development in north east Cambridge (near the Busway). The replacement Whippet service only follows the western part of the old Uni4.

STEPHENSONS.
Interesting arrivals are almost new short ADL/Enviro 200s 440/1 (SN16 ORS/U). They came from the now defunct Silcox of Pembroke Dock.
Withdrawn are Leyland Olympian/Alexander RL 724 (J624 GCR); Volvo Olympian/Alexander RH 831 (N960 FKK); Leyland Olympian/NC 862 (J562 HAT).
But Leyland Olympian/NC 947 (H547 VAT) is reinstated.
The outbasing of an Olympian at Don’s of Dunmow has ceased, following the end of the contract on which that bus was used. This was between Bishops Stortford and Cambridge Regional College, and passed to Richmond of Barley. 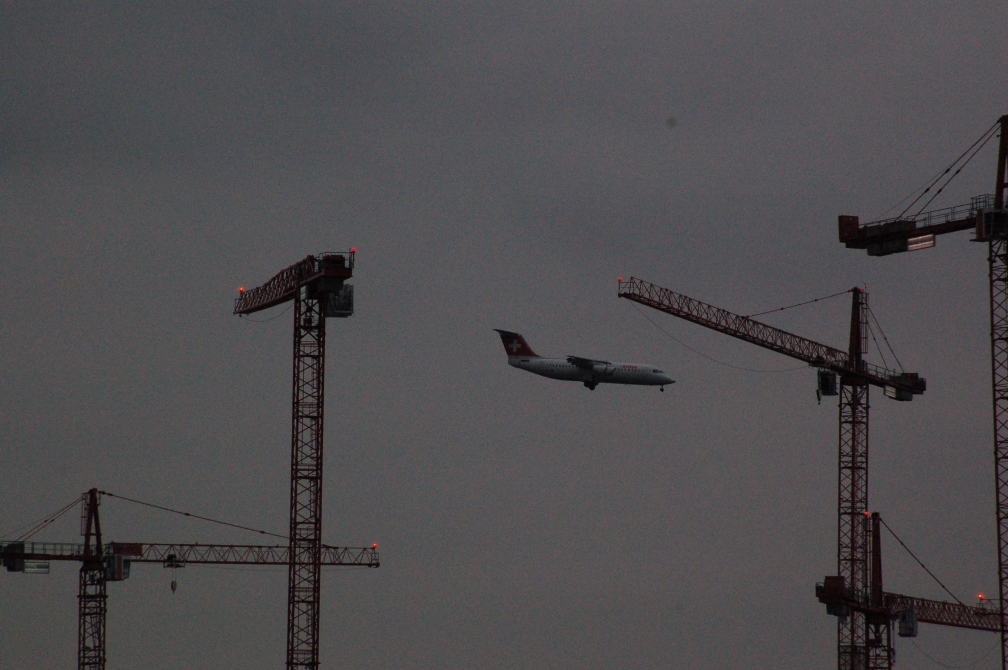 The fleet of 16 Avro RJ100 “whispering jets” are to be replaced by new Bombardier CS300s on its routes into London City, over the next few years. This view was taken from Charlton on 5/4/15.

TERRAVISION.
The Liverpool John Lennon Airport-Manchester service was suspended from the start of July. 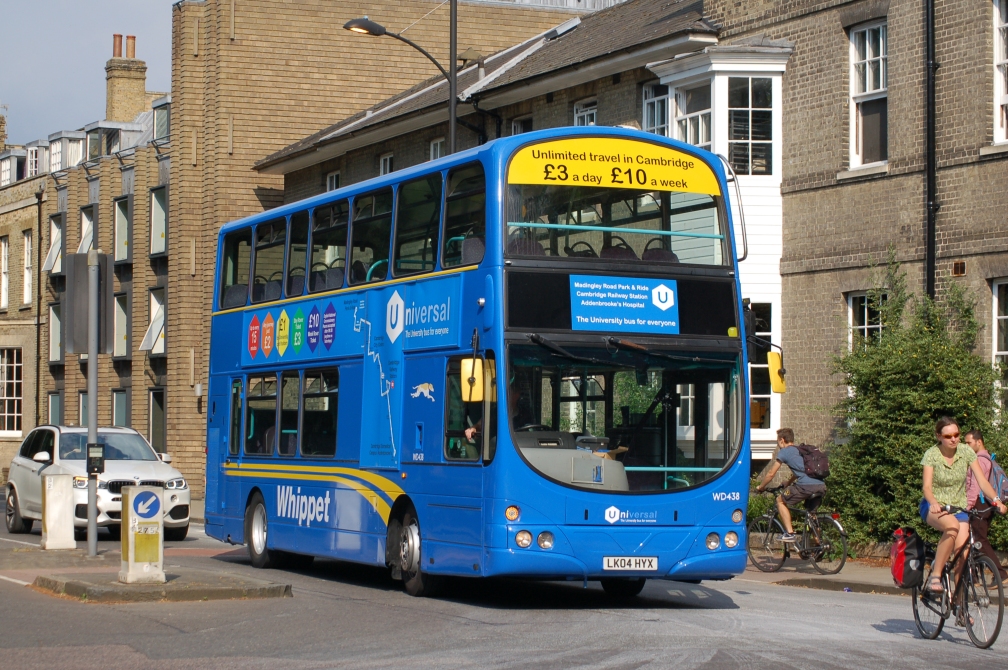 From 23/7/16, new Cambridge city route ‘U’ (Addenbrookes Hospital-City-West Cambridge-Madingley Park and Ride) started. Called ‘Universal’, it replaced Stagecoach Uni4, and a Saturday service has been reinstated. Volvo B7TL/Wright Gemini WD438 was seen on the first day.