Welcome to the December 2016 edition of Busmopolitan, and Happy New Year.
The top news is of the withdrawal of the last of Hedingham Omnibuses’ Volvo Olympians, ahead of the double deck DDA deadline (for registered bus services) at 2359 on December 31st. However, several other Essex operators will continue to use step entrance double deckers, on work where the DDA rule does not apply, namely private charters, rail replacement and “closed” school contracts.
Other interesting news is the arrival of the first Class 345 Electric Multiple Unit trains for the future CrossRail.

AMBER, RAYLEIGH.
Dennis Dart SLF/Plaxton Pointer CC05 BLU has had its blue skirt repainted orange. The rest remains white.
SLF/Plaxton Mini Pointer SIL 6719 retain blue/white and its name from its days with Panther Travel.
Services 14 (Basildon-Corringham) and 261 (Brentwood-Blackmore) were de-registered from 23/12/16  and 16/12/16, repectively. Amber had run 261 commercially since 2013. From 28/12/16, 374 (Grays-Basildon) was revised to serve Fobbing. Council contracted 374 started in 2009, originally with Ensignbus and subsequently Go Ride and Imperial. 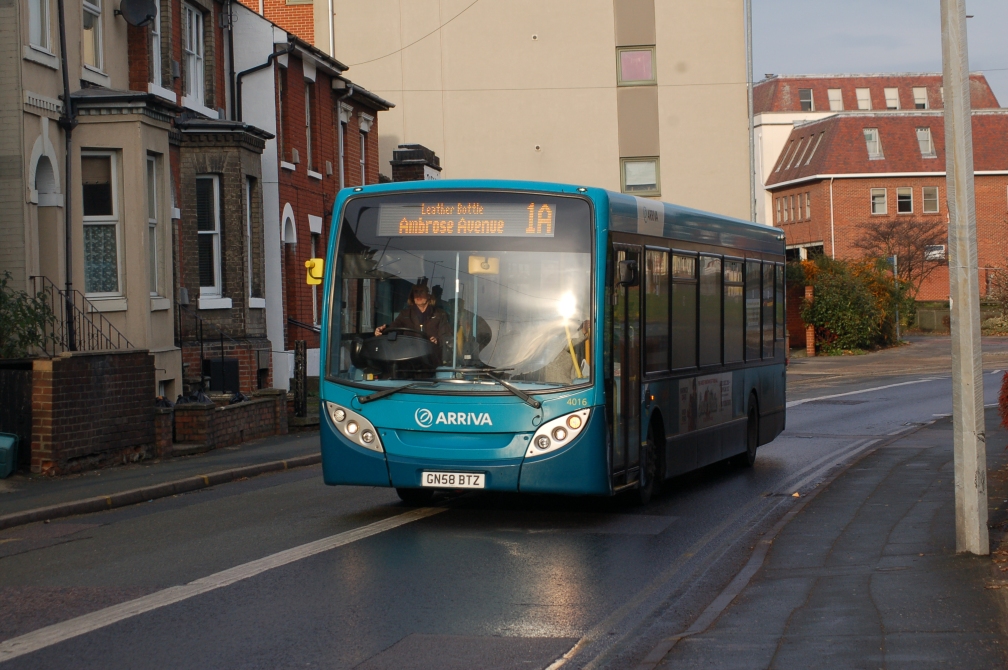 Above: Volvo B7RLE 3819, recently repainted out of SxConnect colours, at the top of North Hill, Colchester on 23/12/16. It is unusually on route 2. 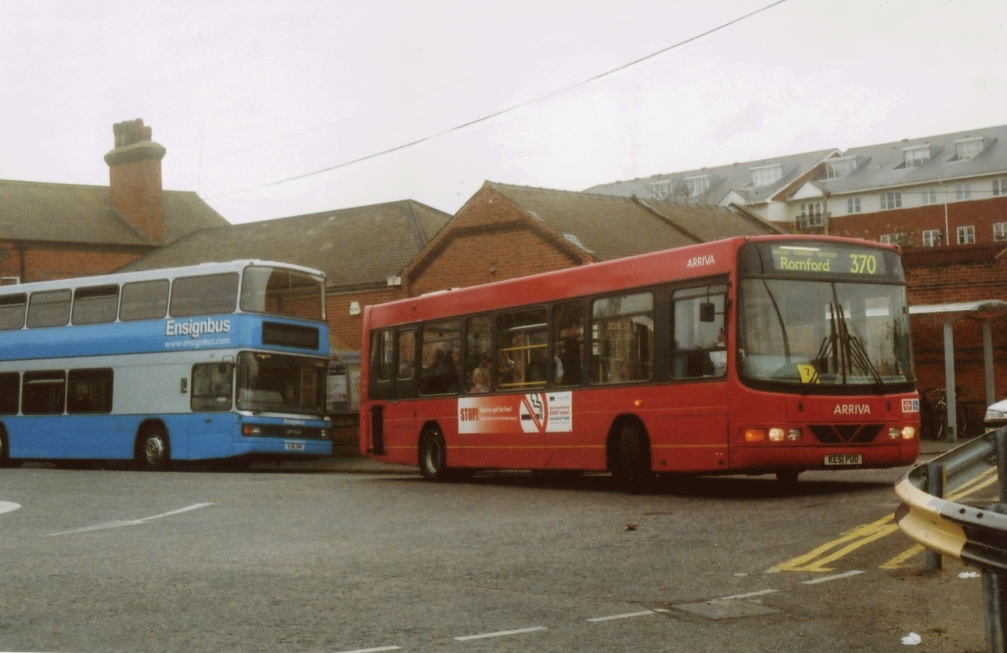 BLUE TRIANGLE.
New Routemaster LT847 has been borrowed from London Central for type training, prior to the conversion of East London Transit to this type from February 2017.
The SOE class Dennis Dart SLF/EL Esteems have spread their wings, with River Road (RR) depot receiving examples from London Central for TfL school routes 646 (Noak Hill-Cranham), 648 (Romford-Cranham). This was because MEC Class Mercedes Citaros were found to be too long. SOEs have also been appearing on TfL346 (Upminster-Cranham). SOE23/24/27 (LX09 AZG/J/O) have arrived so far.
From Docklands Buses is Volvo B9TL/Wright Gemini2 WVL432 (LX11 FJK).
TfL346 is allocated ADL/Enviro 200s SE230-32,, but SEN38 has been regularly seen.
ADL/Enviro 200 SE148 (YX61 DTO) has transferred to London General.
Dennis Dart SLF/MCV Evolution ED20 (LX07 BYL) has been running with no fleet names. It was seen (below) on High Road, Loughton on 17th December.

ENSIGNBUS.
Joining the fleet as no 651, is ex Metroline 8.9m ADL/Enviro 200 YX09 FMJ. It is for new Brentwood local route 61 (Brentwood-Blackmore), which replaces Amber 261.
The last Volvo Olympian/Alexander Royale, 829 (P429 UUG) has passed to Carters of Kettering.
BCI Enterprise 403 (LX66 GXE) moved on loan from Reading Buses to Mortons of Tadley, before returning to Ensign.
There have been adjustments to services 12 (Aveley The Village-Lakeside), 44 (Lakeside-Purfleet-Grays), 66 (Lakeside-Tilbury-Chadwell St Mary), 73 (Lakeside-Tilbury), 83 (Lakeside-Chadwell St Mary).
The annual X10 (Lakeside-Southend) ran on Boxing Day. Volvo B7TL/Wright Gemini 101 (PIJ 601) was used, alongside Volvo B9TL/Optare Olympus 118 (PO58 NPX) and some of the 15 reg B9TL/Gemini2s. Arriva and First run no routes in the area on 26th December, although Southend Transport did many years ago.
AEC PRV Rputemaster RMC1485 (485 CLT) was temporarily decorated green for a More Than insurance promotion.

FIRST ESSEX.
ADL/Enviro 200s 44001-4 (LK57 EJC-F) have transferred to First South West.
Dennis Trident/Plaxton President 33184 (LR02 LZD) has returned to service at Colchester (CR) following accident repairs. It had partially overturned at West Mersea in April 2016. It is mainly on “light duties”, such as staff shuttles.
Wright Streetlite 63339 is delicensed due to accident damage, and has gone for repair.
Volvo B7TL/Alexander ALX400s 32475/76 (AU53 HJJ/K) have received super rear adverts for CT1 industrial adhesive. 32476, was spotted (below) at Head Street, Colchester on 8/12/16.

Traffic changes from 4/12/16, saw 41 (Galleywood-Chelmsford) extended to/from Chignal Estate, while 51 (Galleywood-Chignal Estate), was withdrawn between Chelmsford city centre and Chignal and re-routed to Channels Estate. The Chelmer Valley-Broomfield section of the Chelmsford Park and Ride, passed to Essex CC Community Link, from the same date. 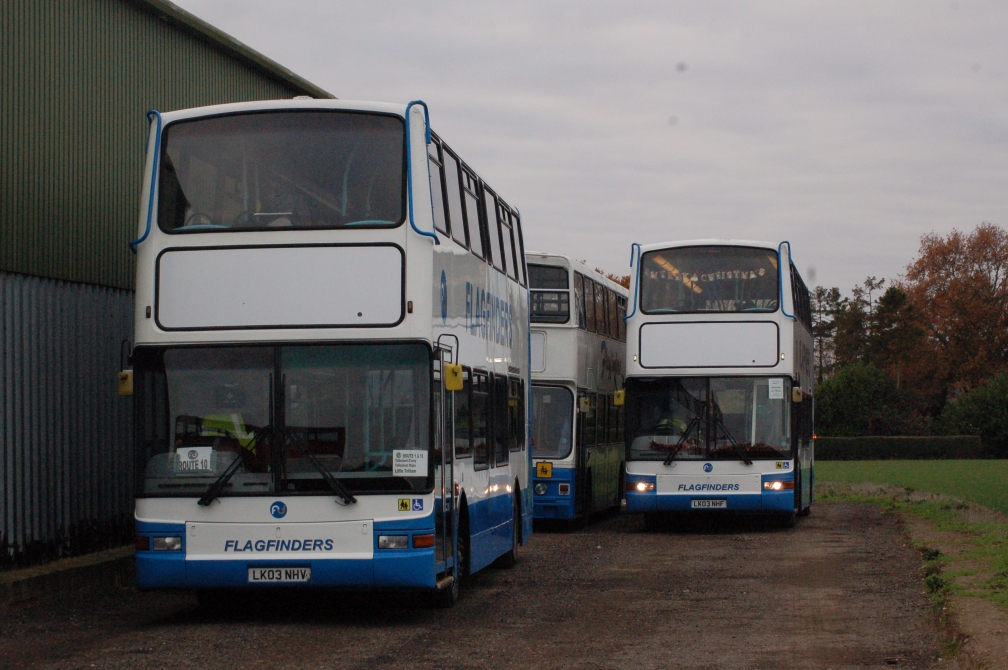 FORDS OF ALTHORNE.
Yet another Dennis Trident/Alexander ALX400 here is S807 BWC. It is a former London, latterly Yorkshire example, sourced through Ensign.

FREIGHTLINER.
All of the electric locomotive have transferred from Crewe to Basford Hall depots (as their maintenance base).
On 2/12/16, Intermodal Class 90 electric loco 90047 appeared on the Ipswich-Felixstowe branch, hauled “dead” (naturally as this route is not electrified) – at the rear of a FSA container wagon consist; with Class 66 EMD diesel electric 66537 leading. On 7/12/16, 90047 was loaded onto an Alleley’s low loader at Felixstowe.
On 4/12/16, Heavy Haul Class 66 EMD diesels 66415 and 66585 were on PW duties at Shenfield, while 66514 has become the regular ‘Thunderbird’ loco there.
66546 was noted on Intermodal on 12/12/16. This had been Heavy Haul.
The GEML was closed south of Witham over Christmas, for engineering work. FLHH 66528 and 66601 brought PW trains along to Ingatestone. 66523 was at Forest Gate. All originated from Whitemoor (March).

GB RAIL FREIGHT.
Class 92 electric locomotive 92032 continued to be resident at Dagenham Dock in December.
66732/47 were present at Ingatestone on 25th December, with trains for the above engineering work. 66771 came on Boxing Day. All originated from Whitemoor.
66771 and 66776 visited Parkeston Quay separately in late December. This is reportedly the first time that GBRf ’66s have visited this NE Essex location. 66771 was on North Walsham tanks, while 66776 was a “super shunter” for Network Rail. 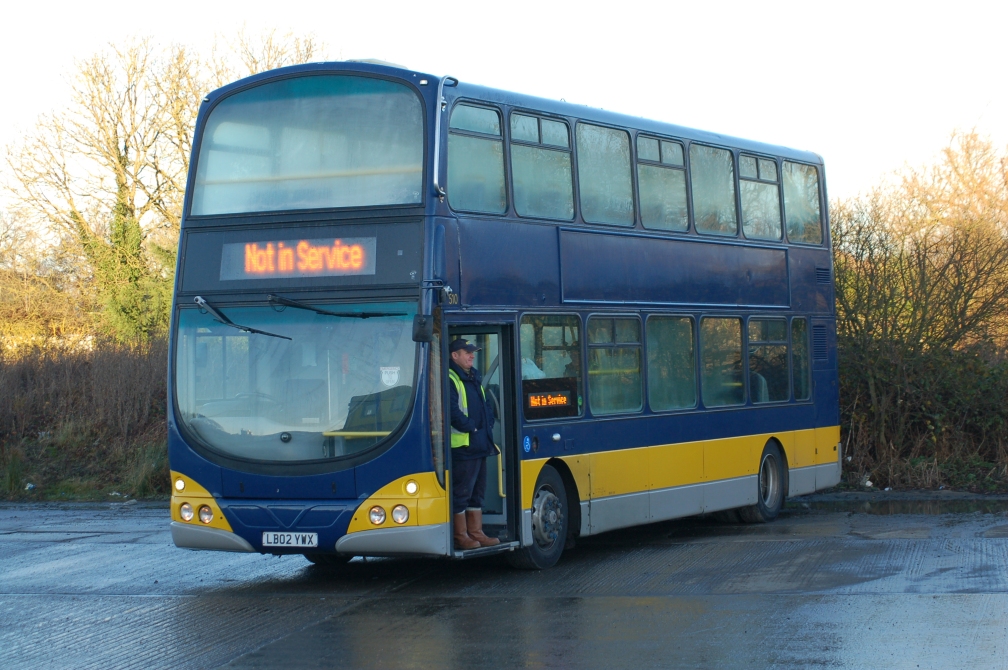 Above: Volvo Olympians line up at Frostenden at dawn on 22/12/16, nearing their destination of Anglian at Ellough.

Above: The Olympians upon arrival at Ellough.

Above: The Olympians amongst withdrawn Anglian Optare Solos, and also a MAN gas bus.

NEW HORIZON, FRATING.
Former East Thames Buses, latterly London General Volvo B7TL/Wright Geminis BX04 AZU/W, have arrived. They were supplied by Ensign. They have received a white based livery with no blue relief.

OLYMPUS, HARLOW.
The site at Parkway has been cleared of remaining vehicles.
Disused Volvo B12B/Plaxton Panther CN05 DZF is sold; along with Dennis Dart SLF/Plaxton Mini Pointer V196 ERG – which had been used as a security hut at this location, and similar Y161 NLK.

REGAL BUSWAYS.
Mb 0814D/Plaxton Cheetah YN06 RVP has been acquired from Hallmark. It has been repainted blue and named ‘Regal Explorer’.

RYANAIR.
Another new Boeing 737-8AS here is EI-FTI.