Welcome to the February, 2018 edition of Busmopolitan.
This month saw the end of Turners of Essex. There had long been suggestions that this north Essex independent was to close. It’s work mostly passed to Hedingham and Chambers, plus Flagfinders.
Stephensons, meanwhile relocated in Braintree, from a yard near Railway Street to the old Wicks Coaches site at Driberg Way, in the south of the town. Co-incidentally, Wicks had latterly been owned by Turners.
First Essex instigated major route revisions in mid February with some cuts. Hedingham stepped in for one case – to maintain a bus service to the community of Peldon – between Colchester and West Mersea.
On the railways, the Crossrail project continues apace, with further deliveries of new Class 345 trains and more testing of these in the tunnels. The remodelling of Gidea Park depot has also been completed.
And on 22nd February, Britannia Class steam loco 70013 ‘Oliver Cromwell’ made a return to its old haunts, hauling a London to Norwich excursion.
Finally, February ended with artic type weather sweeping in from Russia. Dubbed ‘The Beast from the East’, there was heavy snowfall across the UK, disrupting transport links and life in general. And from the west, came ‘Storm Emma’.

AMBER, RAYLEIGH.
The old workshop has found other industrial use, while the old parking area is now occupied by Essex Scaffolding. Both are at Rawreth Industrial Estate. 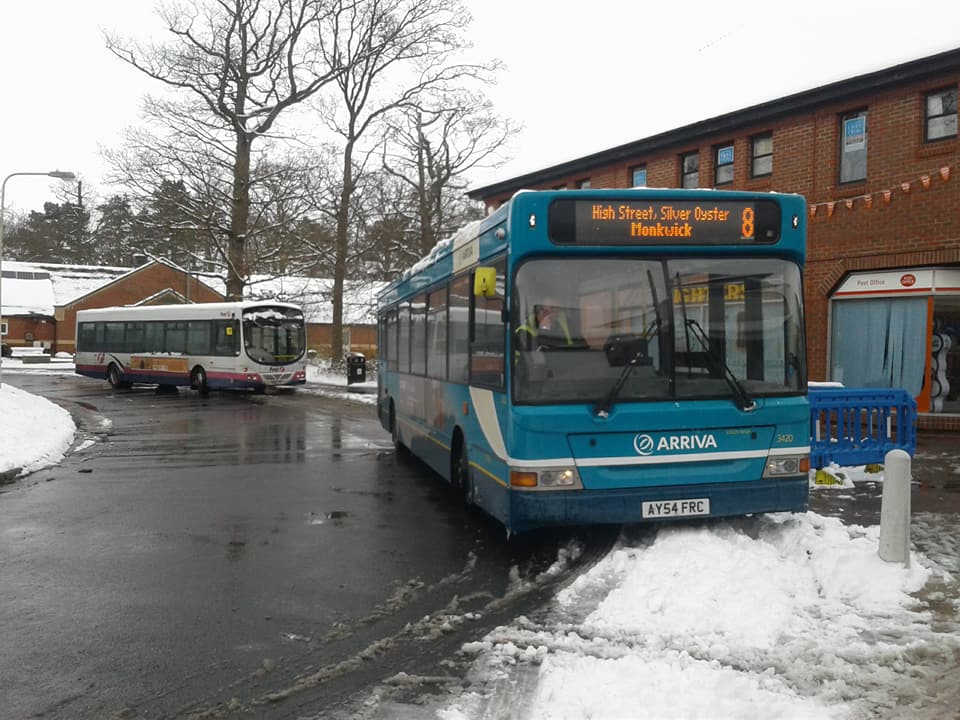 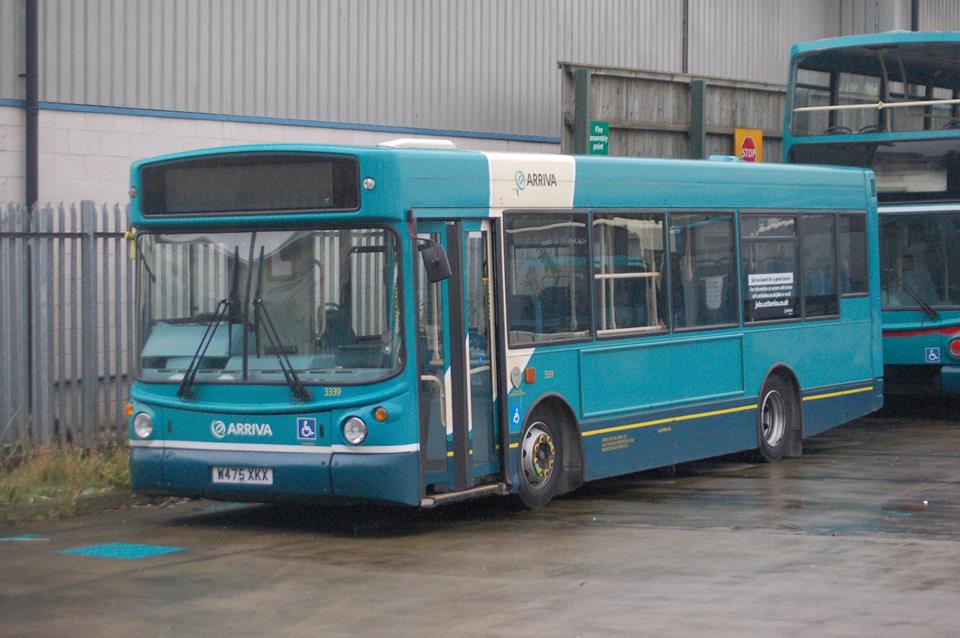 CHAMBERS:
Volvo B7TL/Plaxton President 572 (W489 WGH), was briefly on loan to Hedingham at Kelvedon on 20th-21st February.
Long term VOR Dennis Dart SLF/Plaxton Pointer 252 (EU03 BZK) is being used as a source of spare parts and its future is undecided. It needs a replacement engine to be serviceable again. 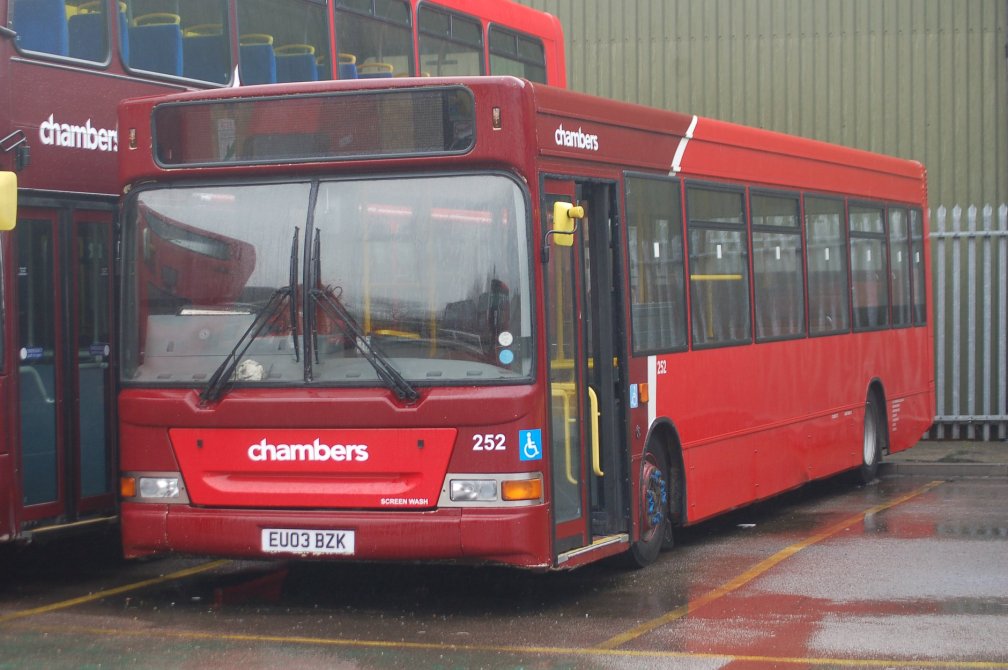 DANS LUXURY TRAVEL.
Has moved from South Woodford, to Waltham Abbey. The new OC address is Pear Tree Farm. The old depot has been redeveloped for housing. 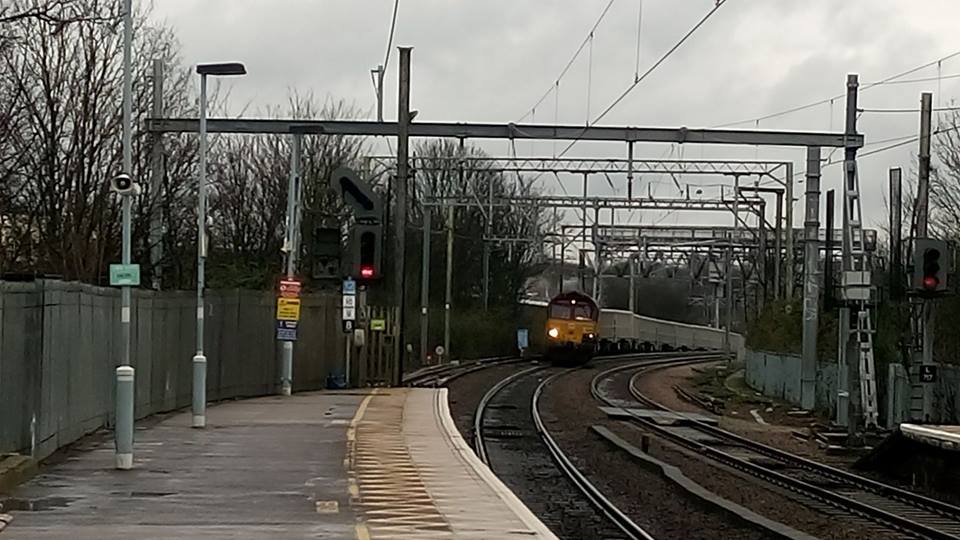 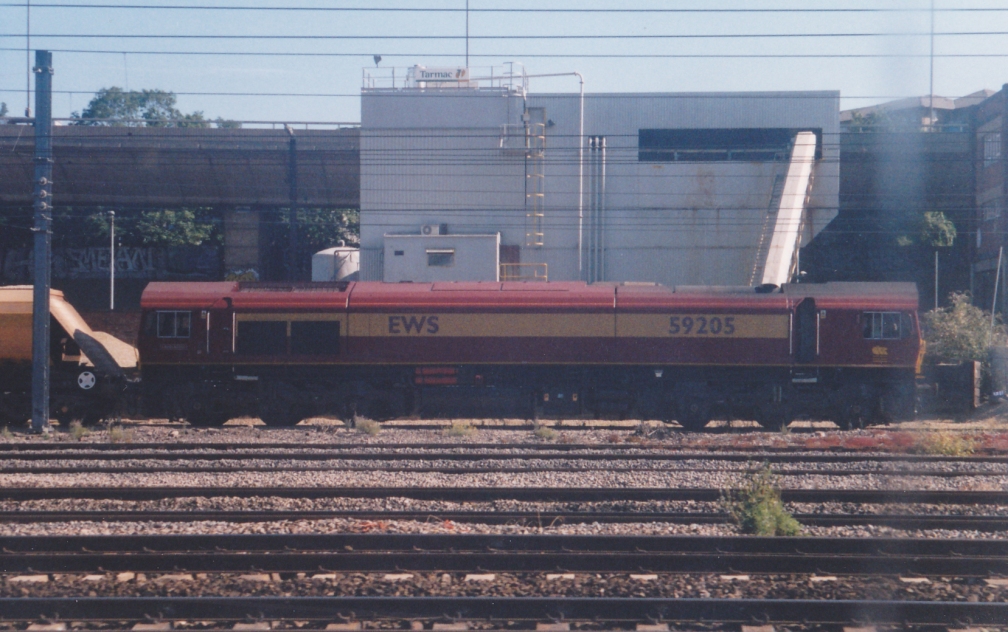 DOCKLANDS BUSES.
Withdrawn are ADL.Enviro 200 MCV Evolutions ED15 (AE56 OUO), ED18 (LX07 BYJ). They have been returned to their lessor.

ENSIGNBUS.
BCI Excellence 150 (LX15 GKL) has been on loan to Reading Buses. 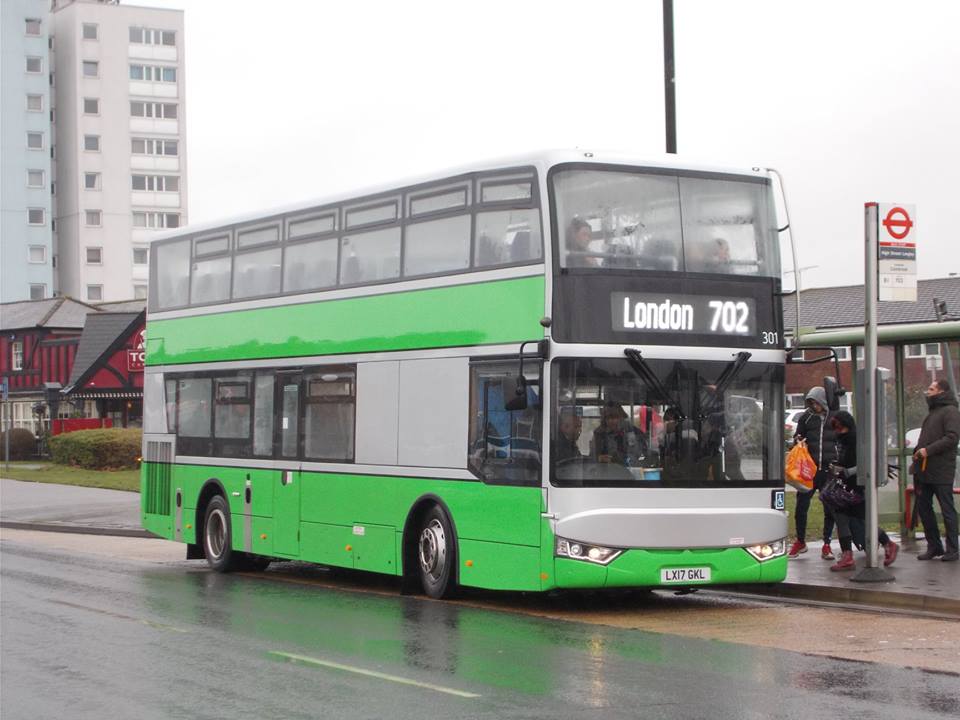 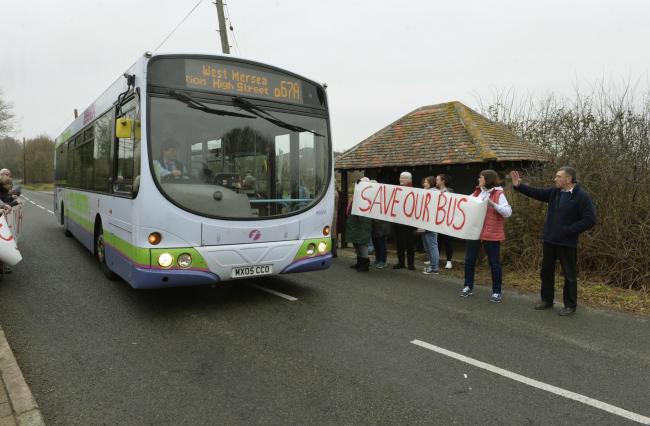 Above: Peldon residents protest about the withdrawal of the regular bus service through their village on 22/1/18. (Colchester Gazette). 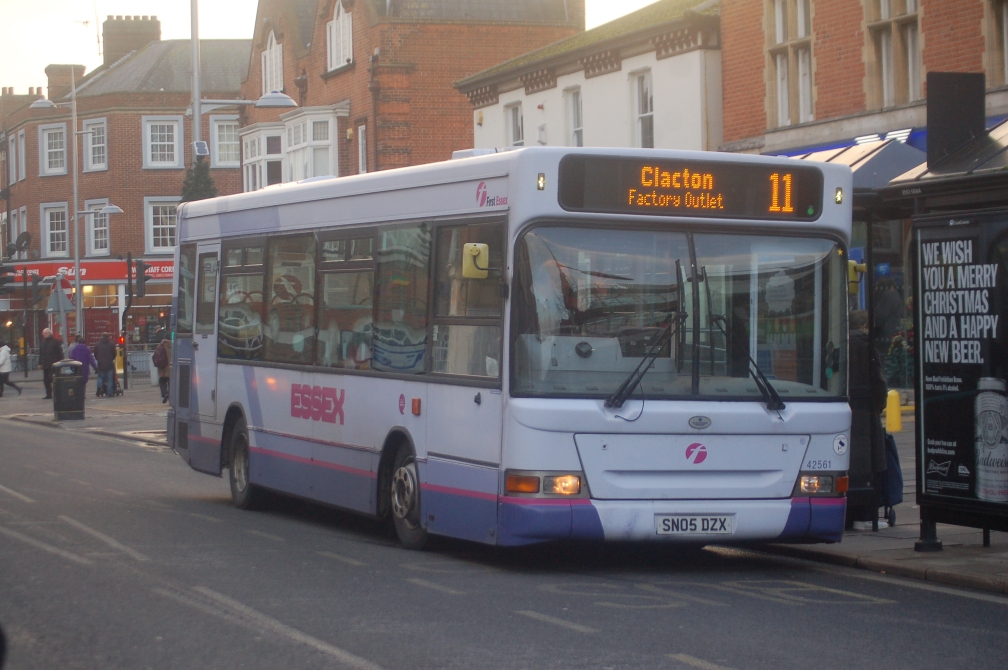 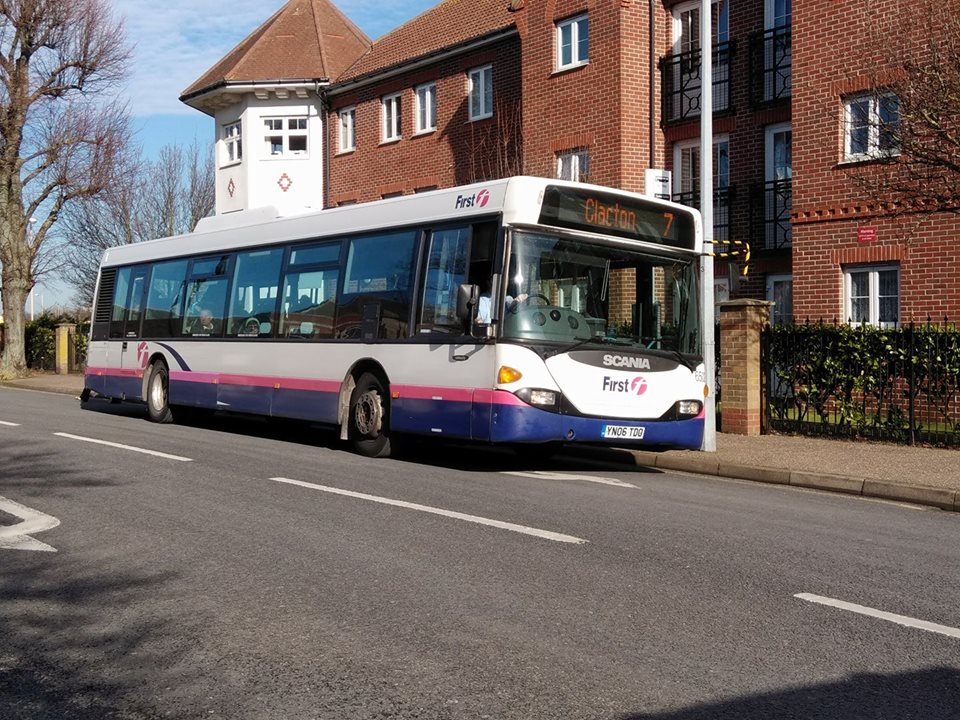 GALLEON TRAVEL.
Has moved from Roydon to Nazeing. 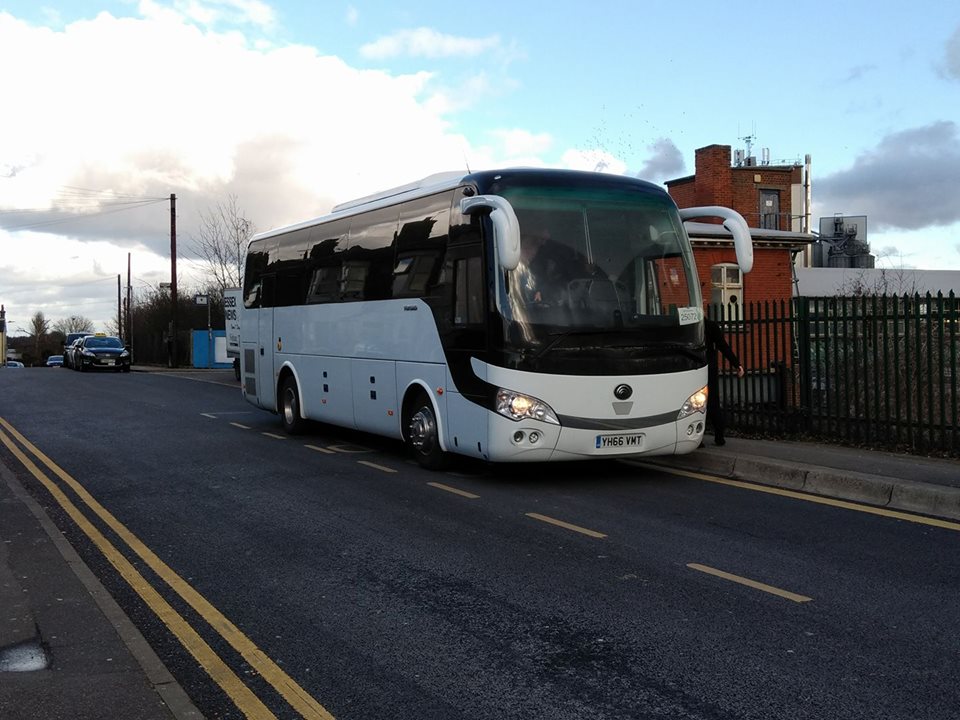 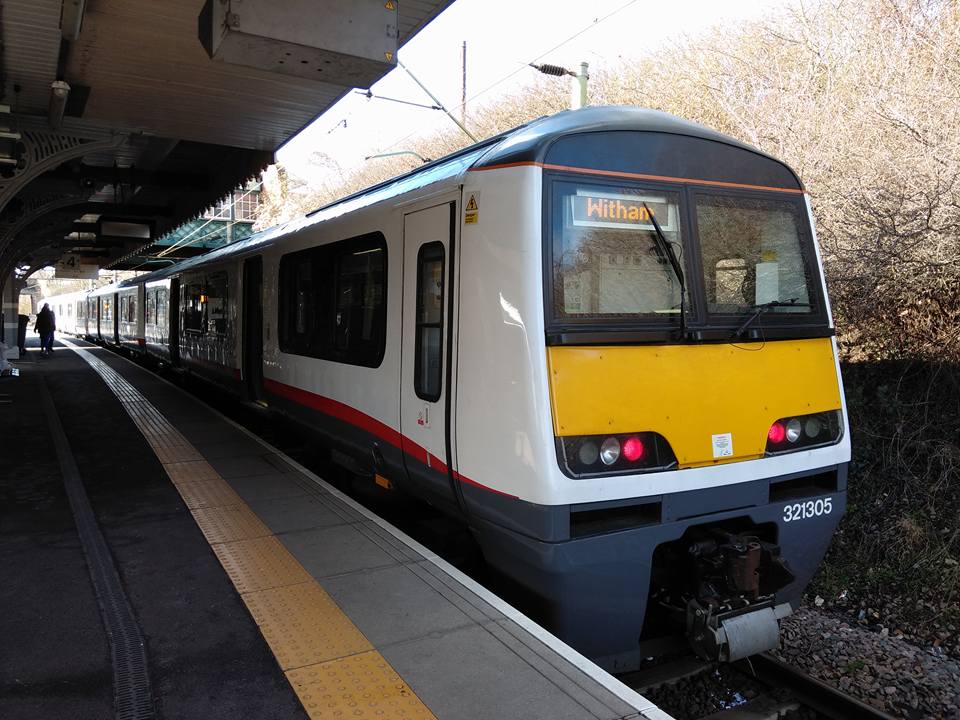 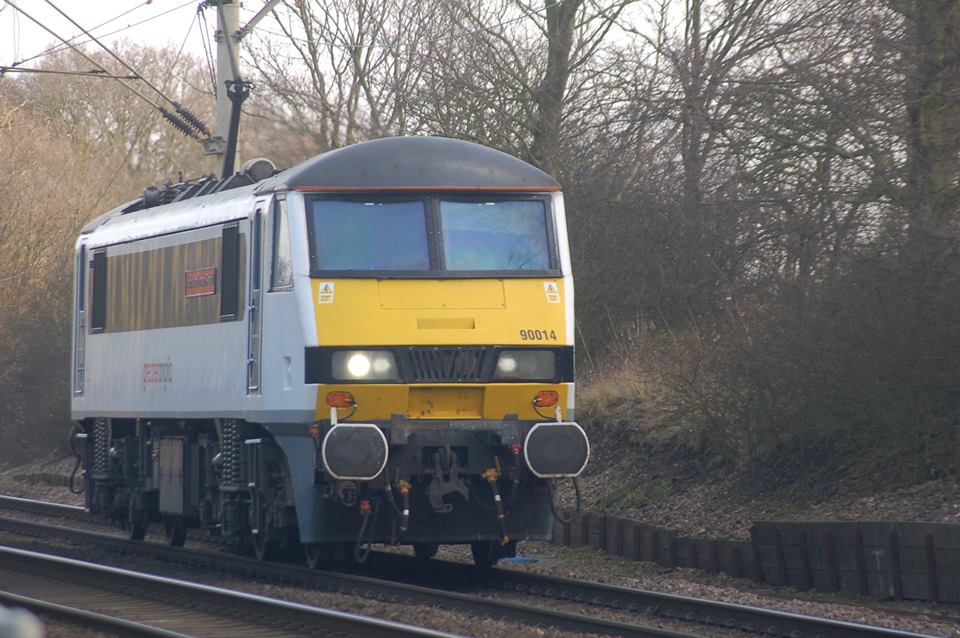 HEDINGHAM.
From 5/2/17, the remaining ex Turners of Essex school runs were taken on, following the closure of Turners (see below). Bus 12 Pebmarsh, Gosfield, Halstead to Hedingham School was involved.
Also from 5/2/17, routes 82/83 were temporarily diverted away from Great Tey, until 27/4/18, due to roadworks. They terminated at Wakes Colne instead. Arrow Taxis provided a Great Tey Shuttle. 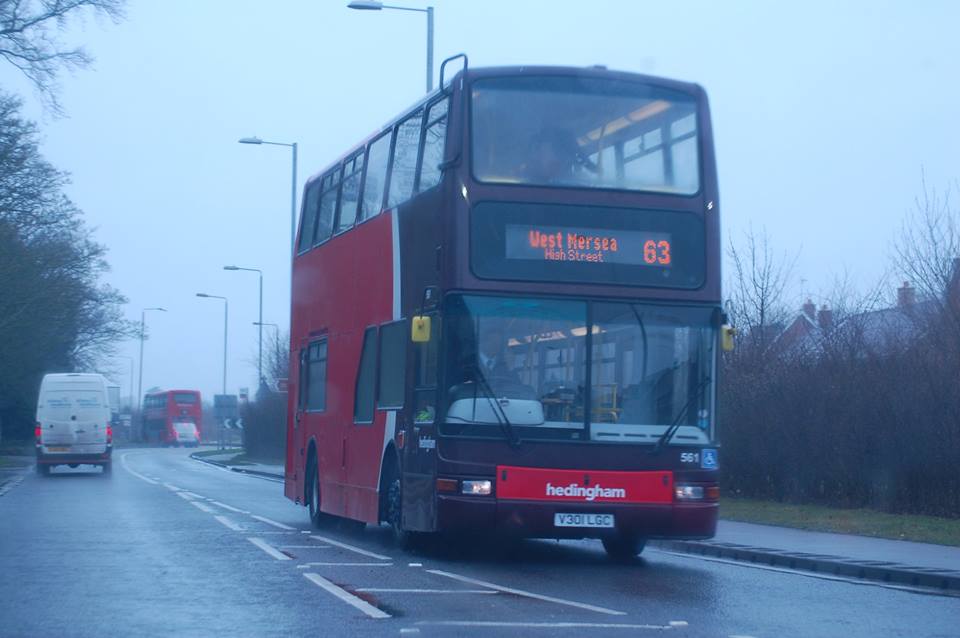 Below: Scania Omnidekka 1518 at West Mersea (High Street) on 19/2/18. The building behind the bus shelter used to be an Eastern National bus garage. Closed in 1973, it was used as a basis for a leisure centre in 1979. Some locals still refer to this stop as “West Mersea bus station”. (John Podgorski). 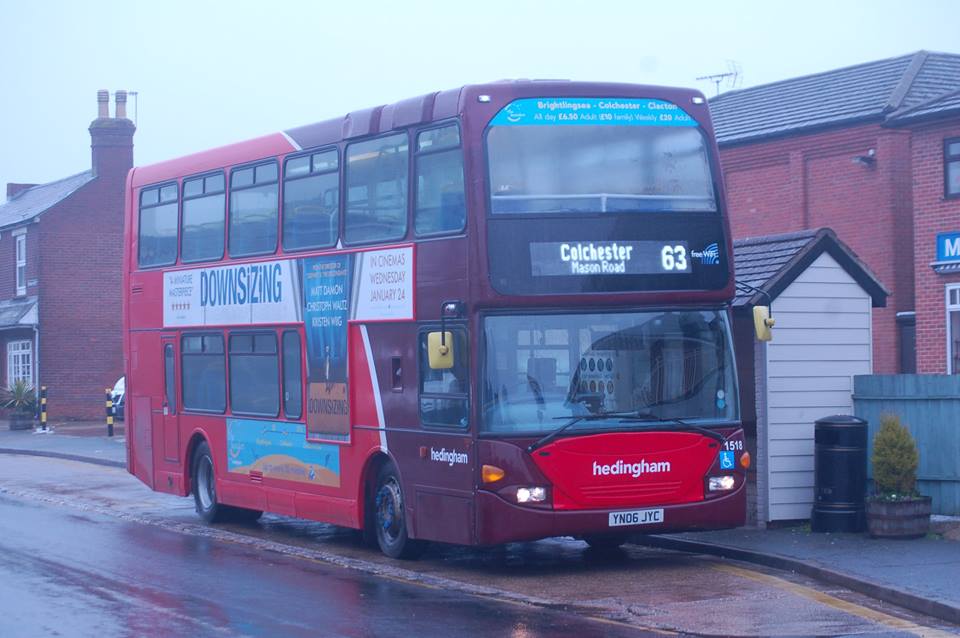 From 19/2/18, some journeys on route 63 was extended from Berechurch to Peldon and West Mersea. This was in response to the withdrawal of First 67A. Clacton’s Scania Omnidekka 1518 (YN06 JYC) was sub shedded at KN for the new service, which is worked by KN and CN. 1518 and B7TL/President 561 (V301 LGC) worked the inaugural journeys to West Mersea. From the same date, Hedingham began serving the Tudor Estate in West Clacton, after First’s service review left that neighbourhood without a bus service. Omnidekka 1520 (YN06 JYC) also arrived at KN on 22/2/18 but returned to CN the following day.
Dennis Trident/Alexander ALX400 743 (X386 NNO) is reinstated.
Chambers Volvo B7TL/Plaxton President 572 (W489 WGH) was briefly loaned to KN on 20th-21st February.

MTR CROSSRAIL.
The Gidea Park depot upgrade was completed at the start of February.

PANTHER TRAVEL.
From 26/2/18, a new rail replacement contract began for Greater Anglia. It is a shuttle serving Wickford, Battlesbridge and South Woodham Feerers, running with the “tidal flow” of peak hours, Mon to Fri. This is to do with platform works at Battlesbridge meaning 12 car trains cannot stop there. It is due to run until April 2018. Panther is using Mb Sprinter AB03 PAN from Witham. 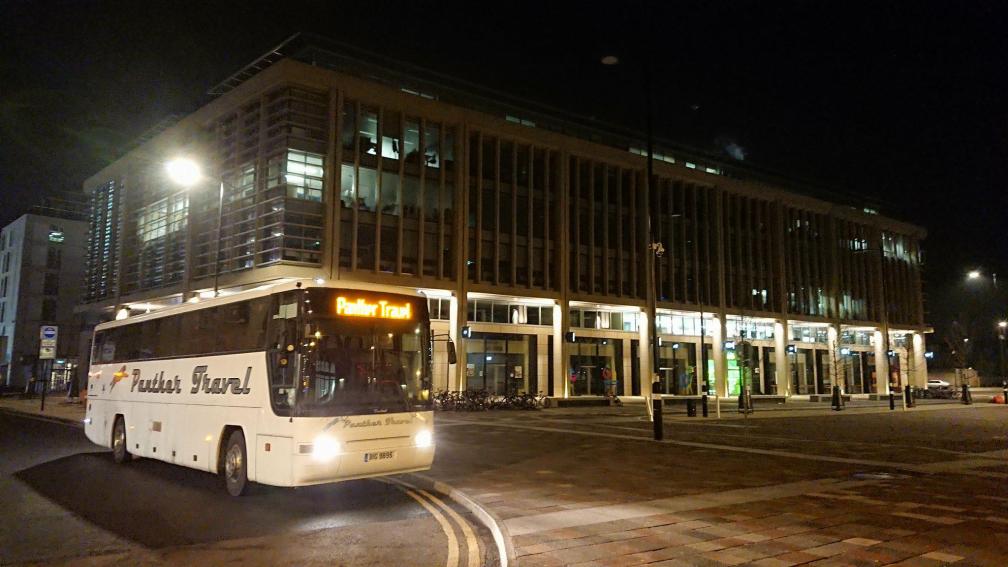 Above: Dennis Javelin/Plaxton Premiere BIG 9895 at Cambridge in the early hours of 23/2/18, on a Greater Anglia late night RRP from Bishops Stortford. (Alex Hazell). 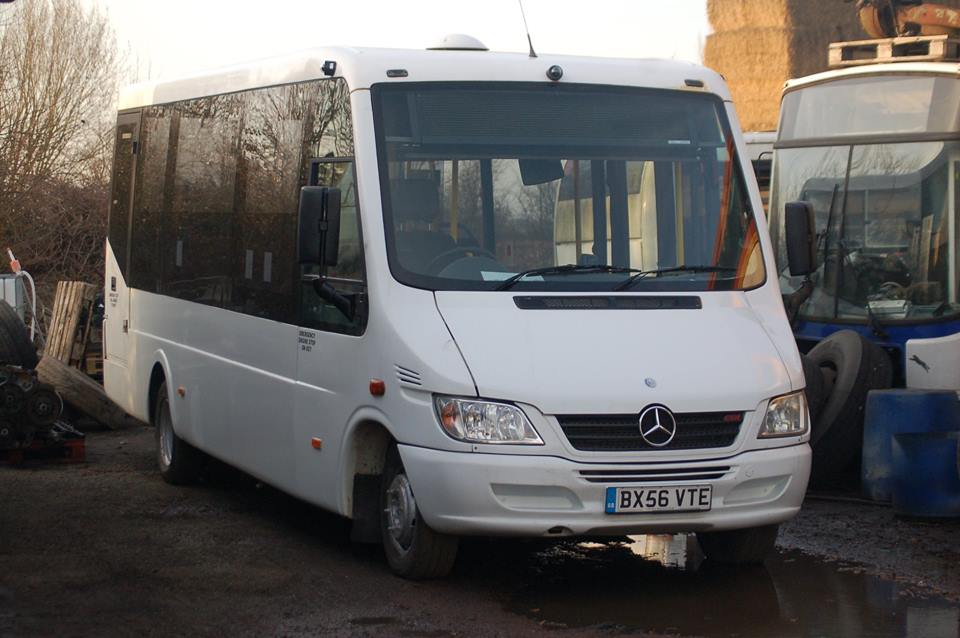 Ex ATS Minibuses of Romford Mb Sprinter/Koch low floor BX56 VTE is now here. Pictured (above) at Matching Green base on 24/2/18. It entered traffic on 27/2/18 – on the Northumberland Park Shuttle; releasing Dennis Dart SLF/Plaxton Mini Pointer KV51 KVK onto other duties. Volvo B12B/Plaxton Panther YN54 WWT has come from the now defunct Turners of Essex.
Dennis Dart SLF/Plaxton Pointers KP02 PUH, PVD have been acquired from Regal Busways – for spares only. Also from Regal is a selection of workshop equipment.
Volvo B12B/Plaxton Panther AB53 PAN is delicensed due to engine failure. 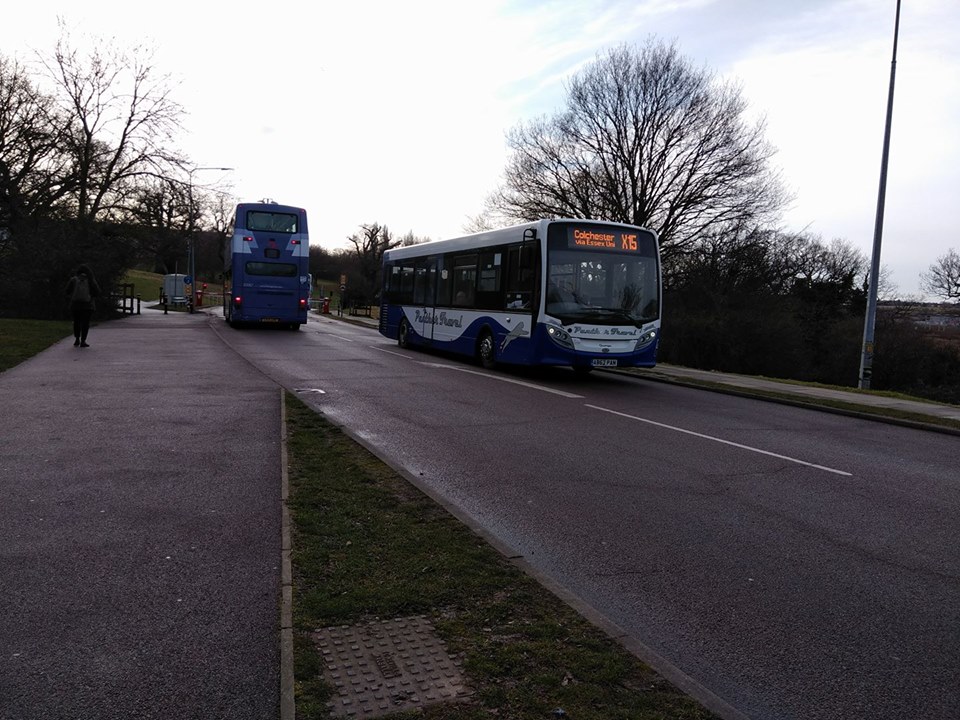 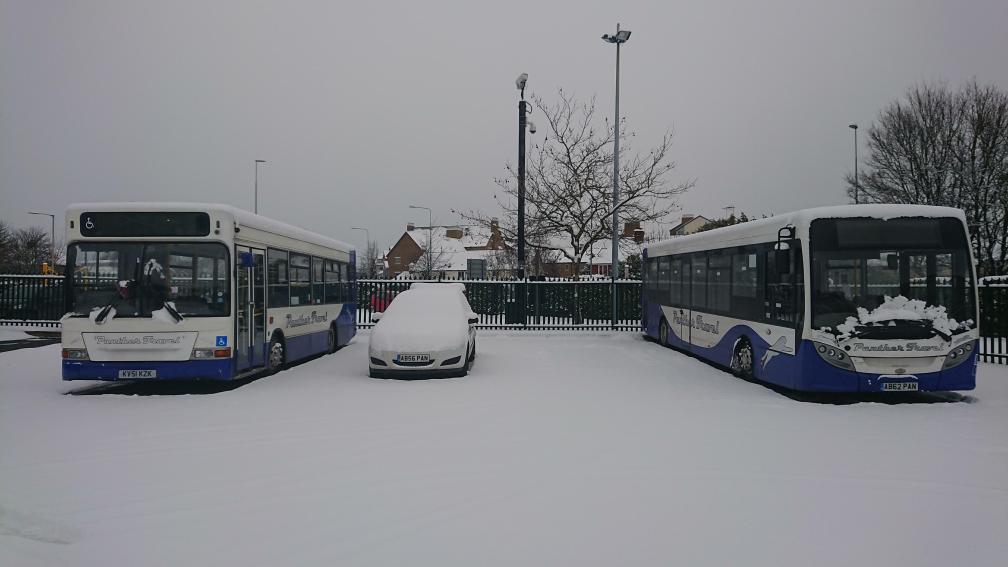 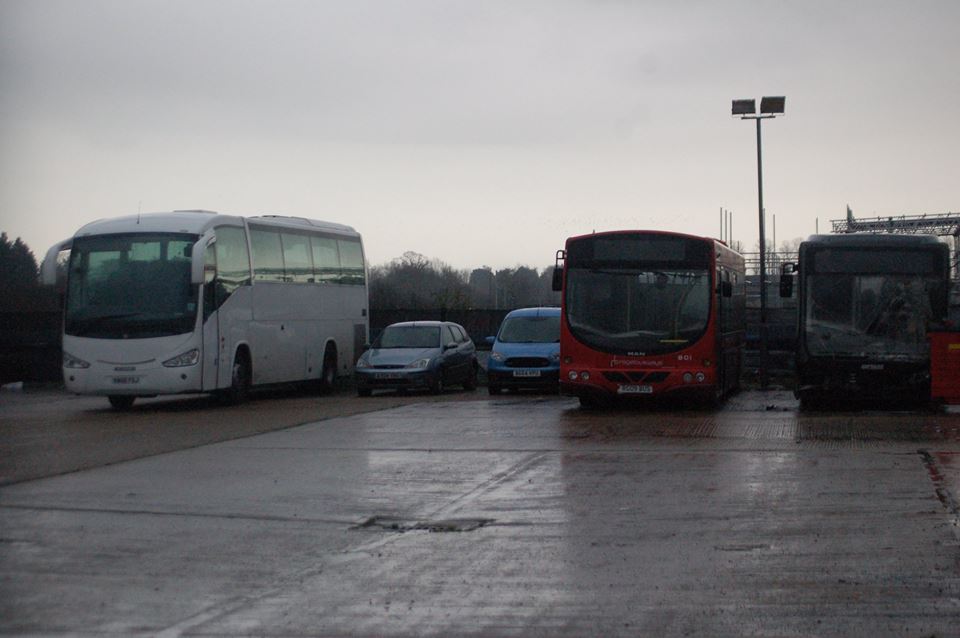 The last vehicle present at Cooksmill Green (Chelmsford) depot was Scania/Irizar YN56 FGJ. It was moved to Rochford on 3/2/18, joining Optare Tempo PO1 (YJ56 WVX) and MAN NL270LF/Wright 801 (RG09 BUS). 801 had gone by 10th February.
Dennis Dart SLF/Plaxton Pointers KP02 PUH, PVD has passed to Panther Travel for parting out (qv).
Although some vehicles and equipment were sold in the weeks before and after Regals’closure, the remainder were offered via auction between 19th and 26th February 2018 via John Hill Coach Sales in conjunction with Shouler and Son.
Dennis Dart SLF/Plaxton Mini Pointer NA52 AWF is now with A2B Bus and Coach, Cambridge. Tempo PO3 (YJ56 WVY) has also been sold – after being repainted silver.

STEPHENSONS.
From the now defunct Express Motors of Pennygroes are Scania N230UD/Enviro 400s CY12 EMS, CX14 EMS. A number of ADL/Enviro 200s have been acquired from Abellio London – most in a dealer capacity. 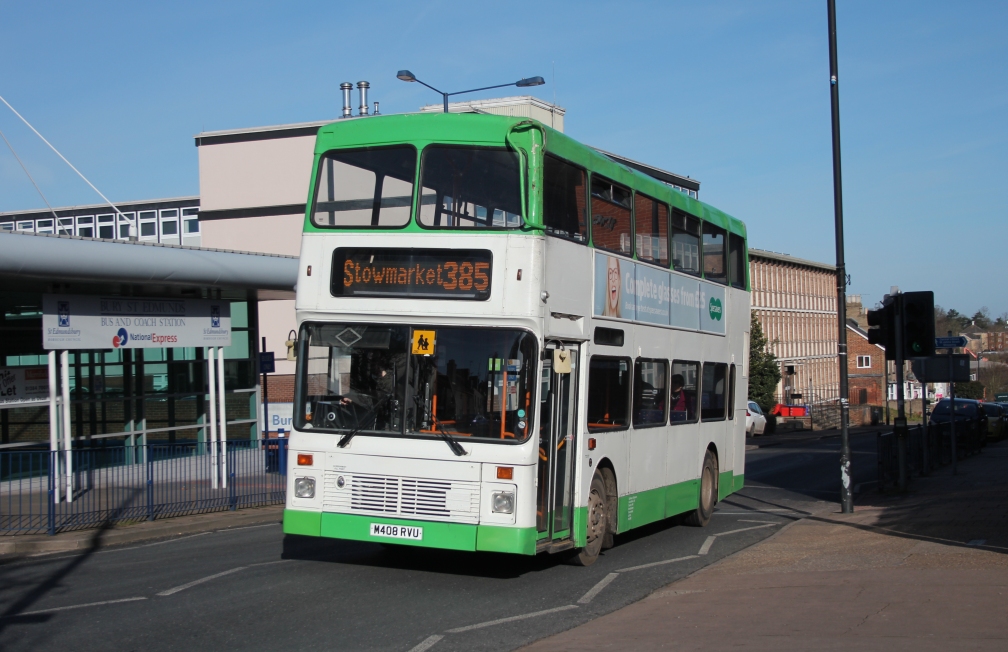 Above: Reserve fleet Volvo Olympian 808 at St Andrews Street North, Bury St Edmunds on 16/2/18. It is on a schools working of route 385, which is otherwise operated by Galloway of Mendlesham. (Colin Lloyd).

Below: Scania Omnidekka 649 most unusually on Bury St Edmunds town service Breeeze 2 on 16/2/18. It is turning into the bus station. The bus was one of a pair new to Blue Triangle and acquired via Ensign. (Colin Lloyd). 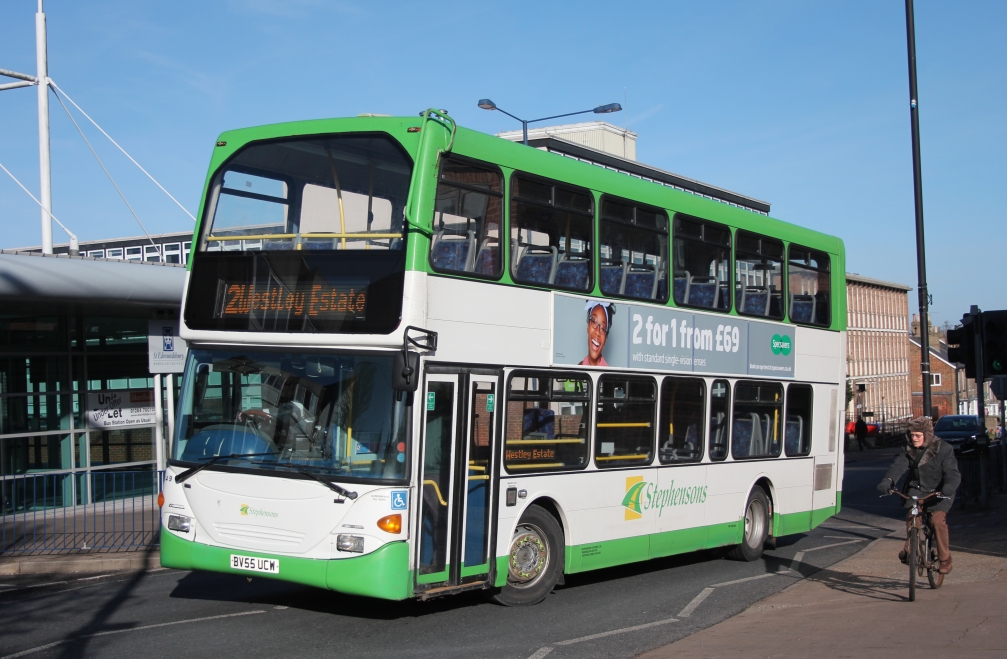 TURNERS OF ESSEX, WICKHAM ST PAUL.
Ceased operations after 1/2/18. A number of school contracts have passed to other operators, including Hedingham and Chambers. Flagfinders has the sports and swimming contracts.
Mb 709D W364 SNN and Renault Master B10 OVV have passed to Decker Bus, Whittlesea.
Leyland Olympian/Alexander RH K873 CSF has been sold to Llan y Pwll Farm, Wrexham – for conversion to a mobile caravan.
Setra S415 MY53 TRA has passed to Nationwide, Peterborough.
Also sold are Volvo B12B/Plaxton Panther YN54 WWT; Setra S315 LSU 788.
Leyland Olympian/NC K735 ODL is on hire to De Vere, Sible Hedingham and will continue to be so. 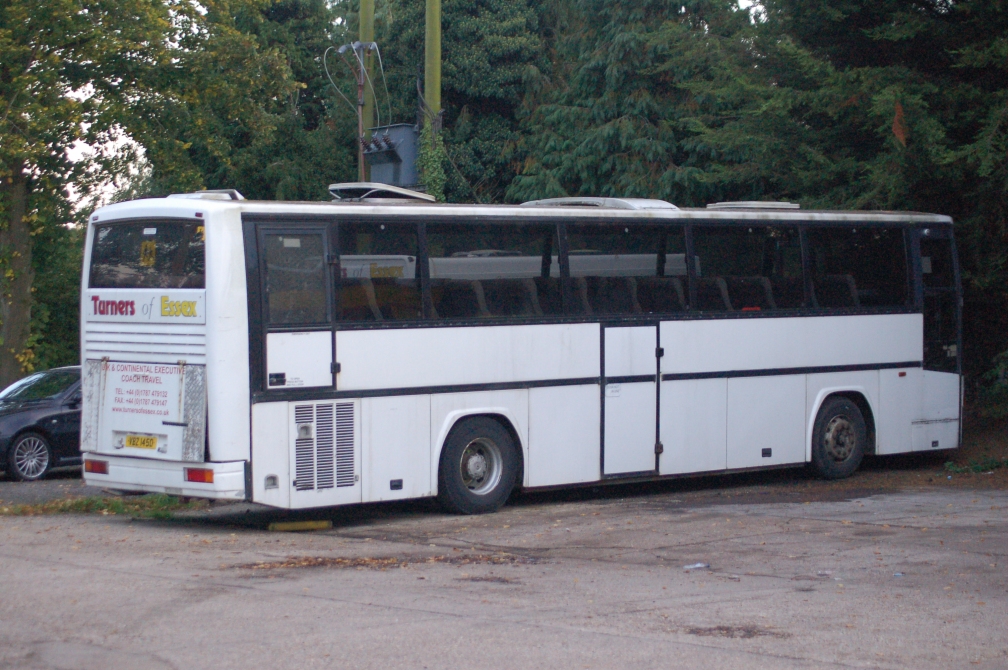 Above: MAN18.290/Jonckherre Deauville VBZ 1450 at Wickham St Paul depot on 22/9/17. This coach had been withdrawn by that time and was sold not long after. (John Podgorski). 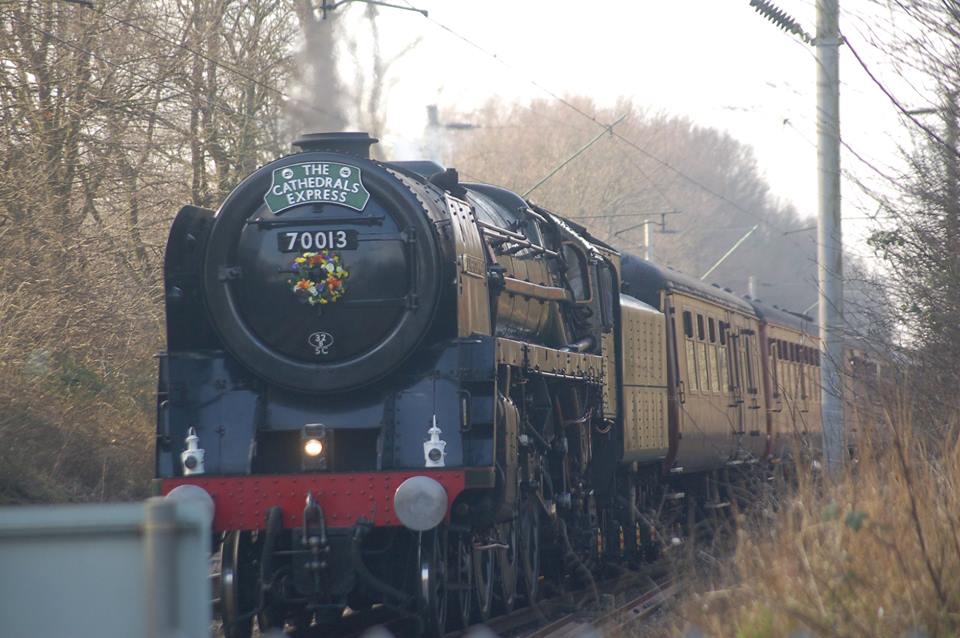 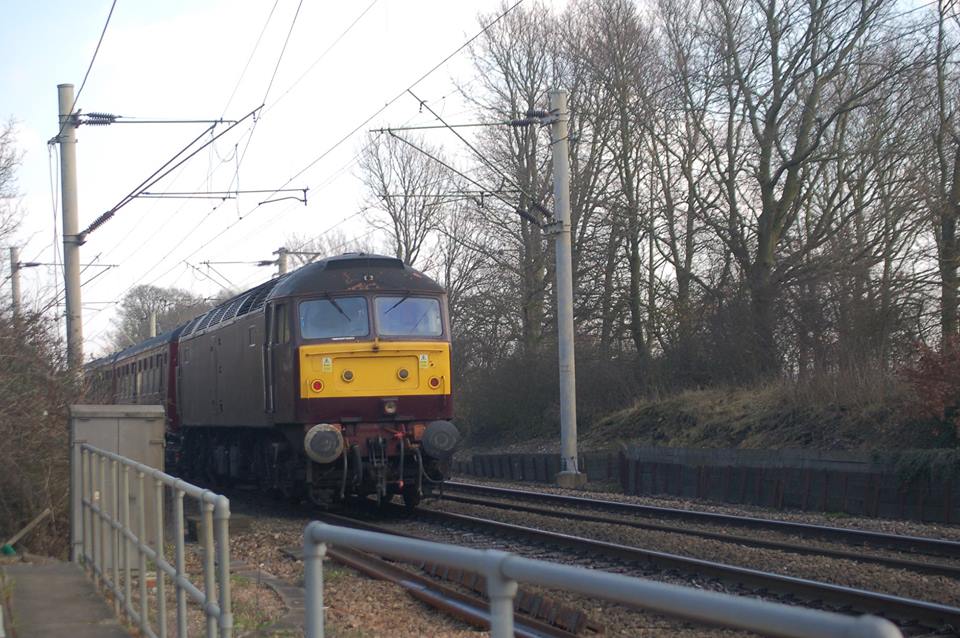