Welcome to the October 2015 edition of Busmopolitan.
First has continued its retrenchment in Essex, by beginning a withdrawal from the Braintree area. Phased over a fortnight, from mid October – this saw the handing over of two local routes to Stephensons of Essex and Panther Travel. This will conclude at the start of November, with the closure of First’s Braintree depot, and the surrender of further commercial services to independant operators.
Meanwhile, a few miles to the west, Stansted Citylink opened for business in early October. Joining the fray on the hotly contested Stansted Airport to central London corridor, Citylink has the advantage of Comfort Del Gro corporate backing, and the fact it serves Kings Cross St Pancras, which it’s rivals, National Express and Terravision, do not. This was closely followed by Airport Bus Express; who provide a Stansted to Victoria via Baker Street link. 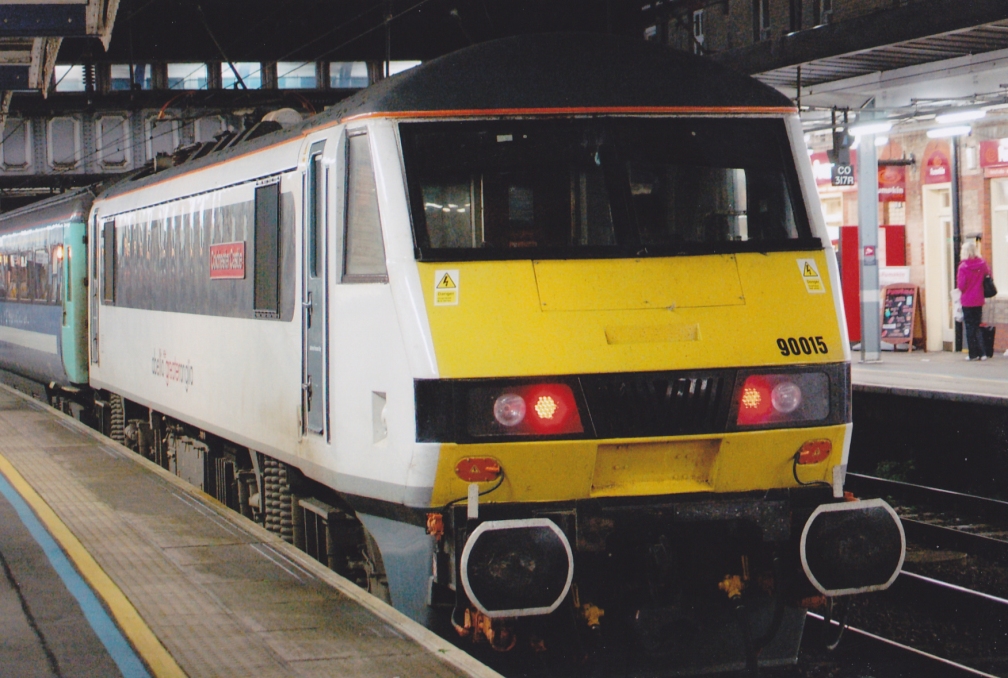 Above: Freshly repainted 90015 ‘Colchester Castle’, at Ipswich on 28/10/15; propelling a London to Norwich service.

AIRPORT BUS EXPRESS.
This new operator runs 24/7 express coach service A20, between Stansted Airport and London Victoria (via Baker Street). Part of the Italian Autostradale Group, the registered office is at Royston, Hertfordshire, and the operating centre is at Great Hallingbury, Essex.
New for this venture are Scania K440EB4/Caetano C650s BX65 WBE/F/G/J/K/L/M/N/O/P/T/U. They wear a white/red livery. 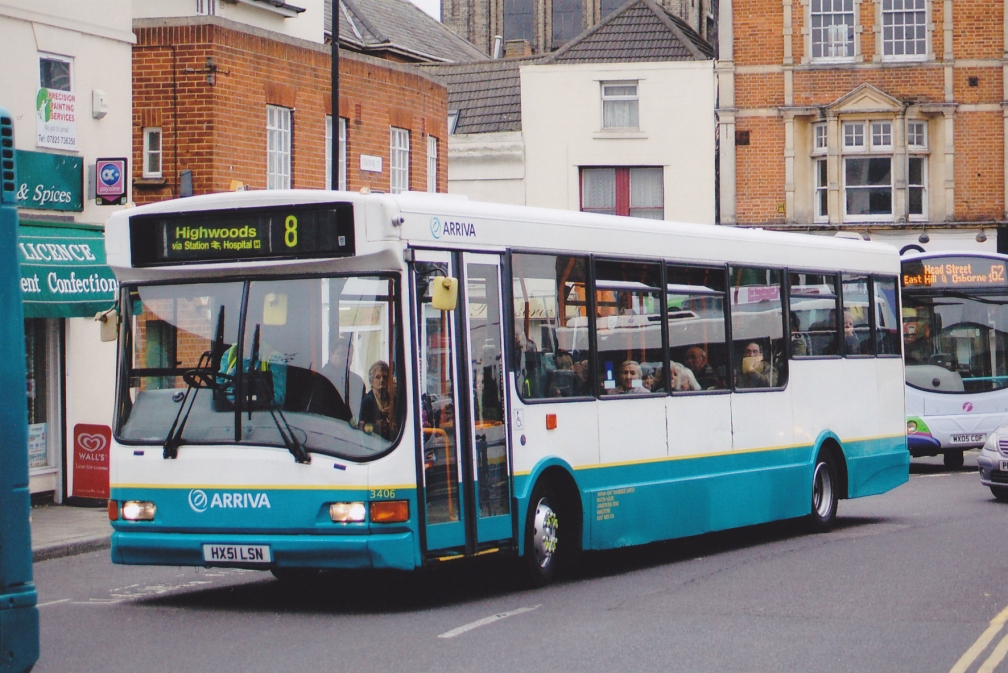 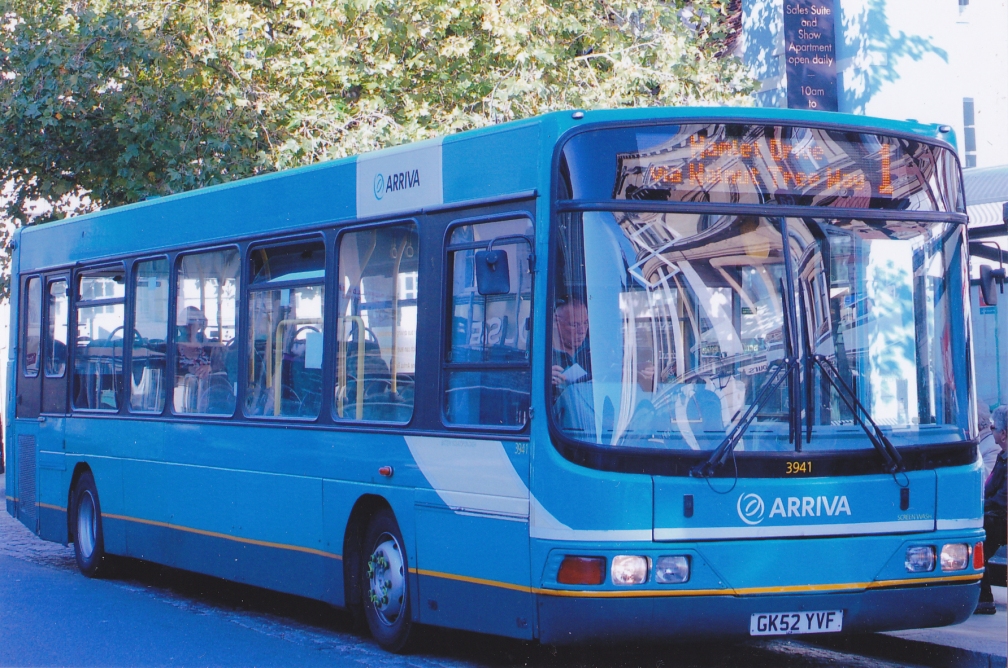 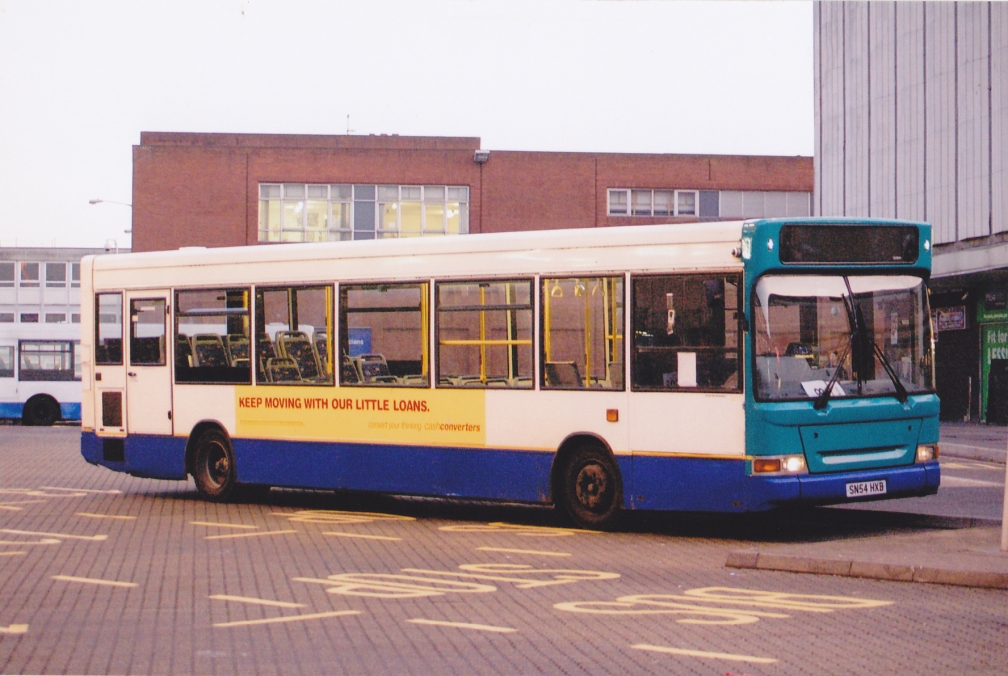 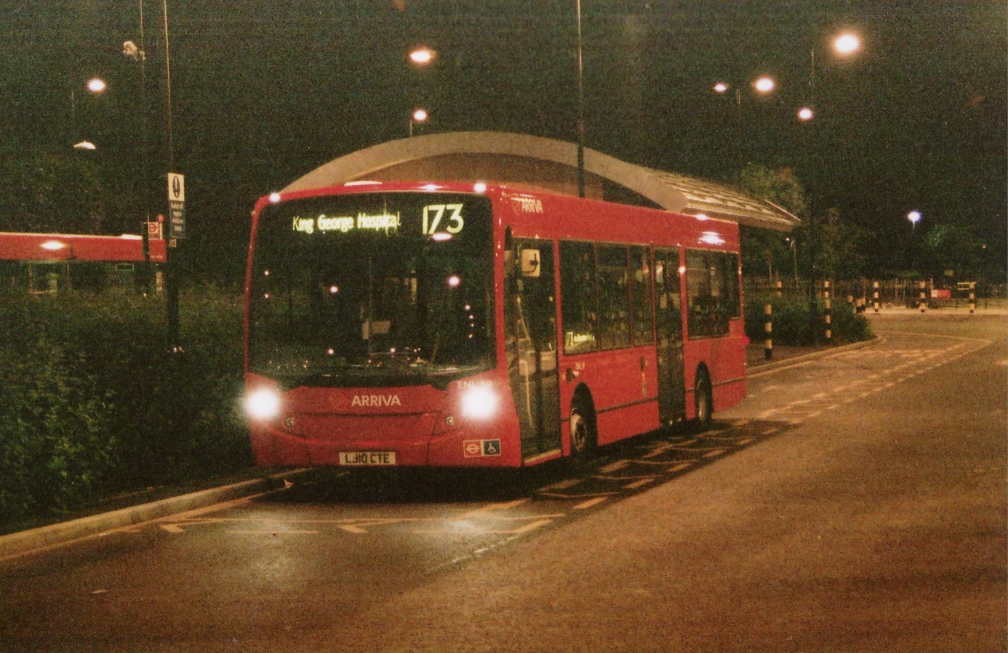 CHAMBERS.
Optare Solo 907 (YT51 EBF) has gone to Anglian; ending the use of Solos here.

COACH STOP, RETTENDON.
This is the new title of the old Supreme Coaches.
Setra S315 T19 PVC has been re-registered BU03 LXZ, and sold to Marshalls of Leighton Buzzard. 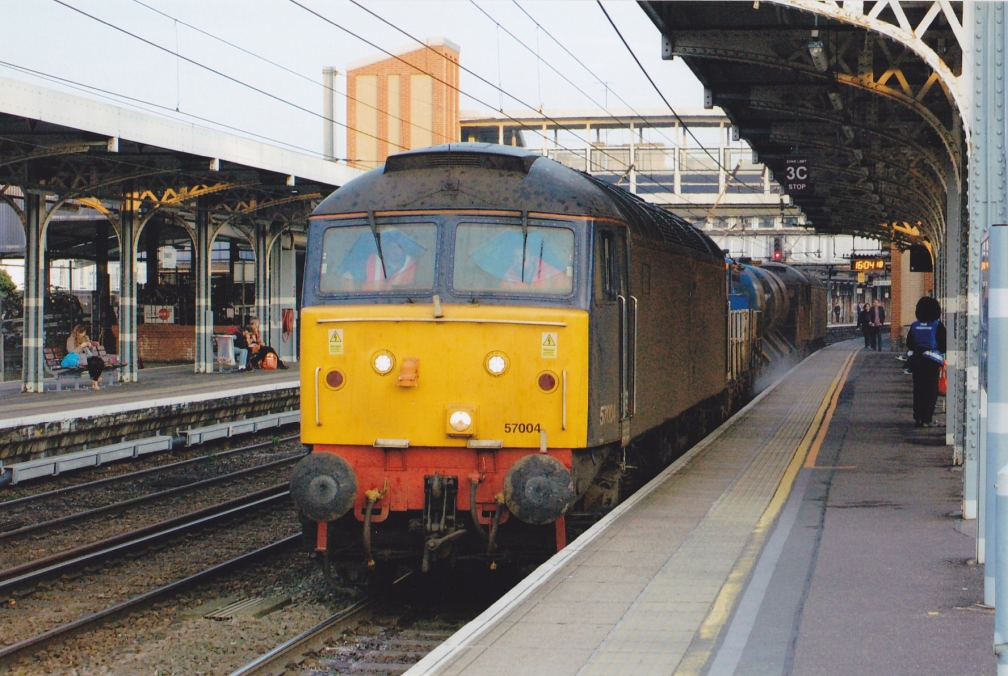 EAST THAMES BUSES.
Former Easybus Plaxton President – Volvo B7TLs resold via Ensign are VP8 (X159 FBB); to Shred and Butter Ltd of Oxshott, Surrey and cannibalised VP4 (X153 FBB), to MC Tractors of Ely, for scrap. Both had latterly been with London General.

ENSIGNBUS.
Dennis Dart SLF/Caetano 784 (HV52 WTJ), has passed to Trustybus at Harlow.
Leyland Titan HVX 771T was acquired from Garnetts of Bishop Auckland in a dealer capacity, and resold to a local preservationist. This was new to West Midlands PTE as 4003 (WDA 3T) and later served with London Transport/East London Coaches as T1128.
Former Leyland Olympian/NC 132 (G132 YWC), latterly with Arriva The Shires, is being stripped for parts. 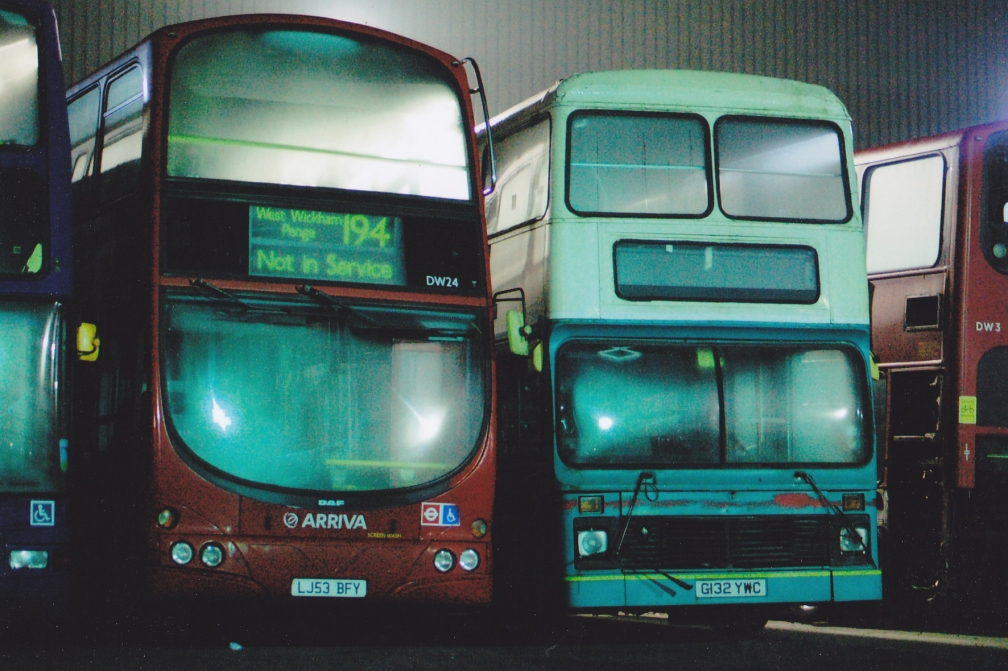 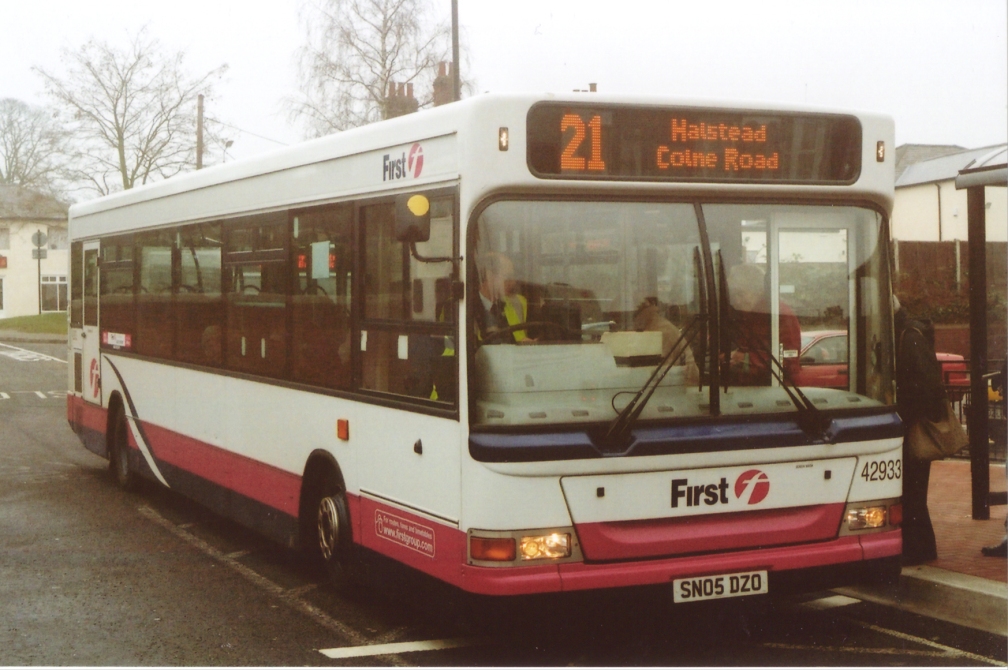 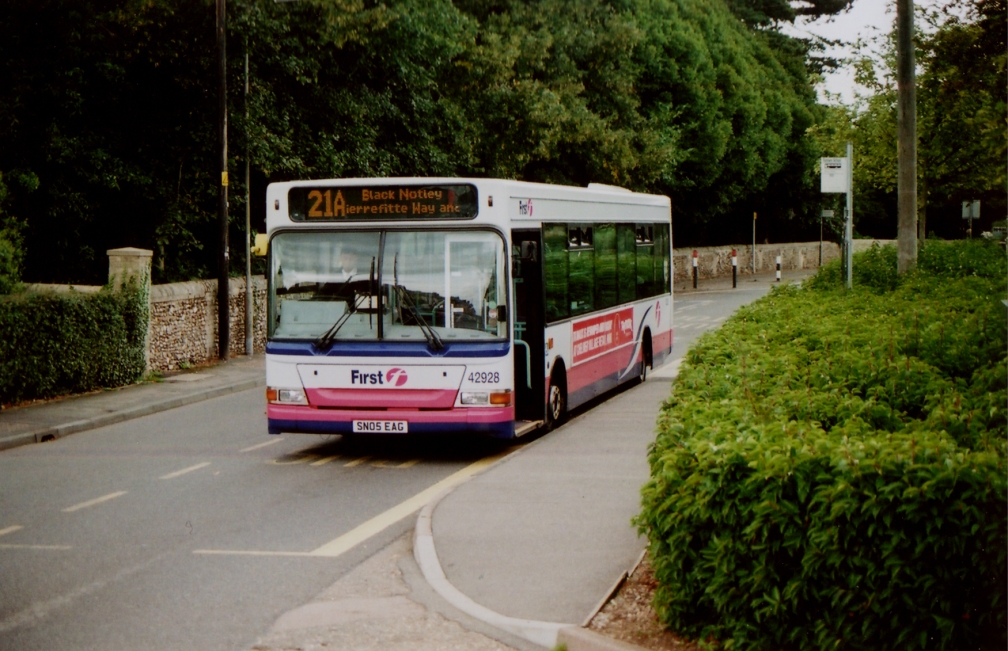 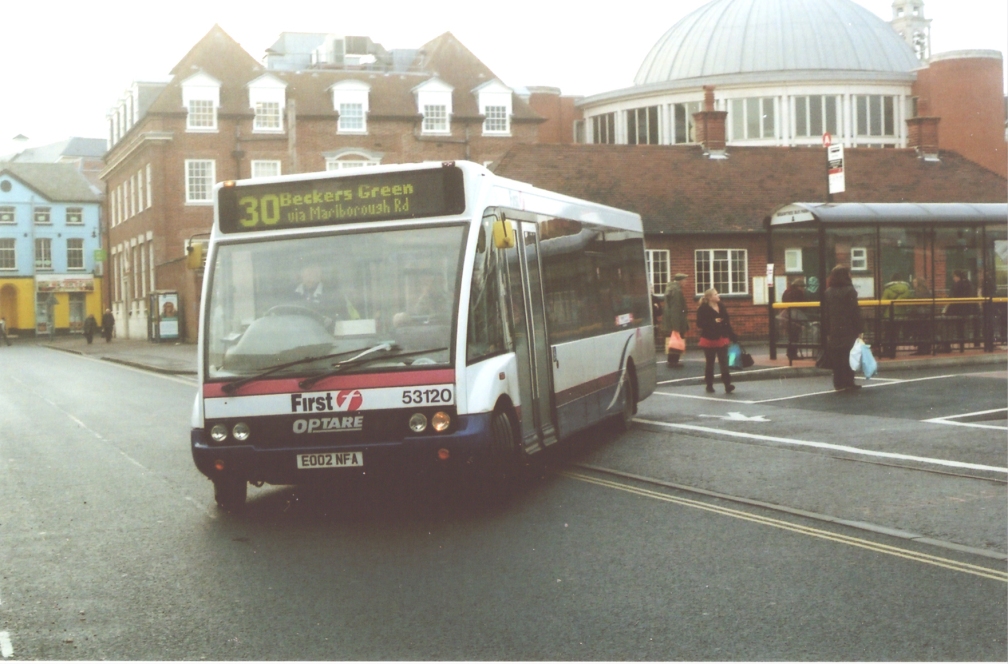 Above: Optare Solo 53120 departs Braintree Bus Park on a southbound 30 journey, in December, 2008.
This was when Braintree was an outbase of Chelmsford. 53120 subsequently went to First Eastern Counties, and more recently First Potteries. 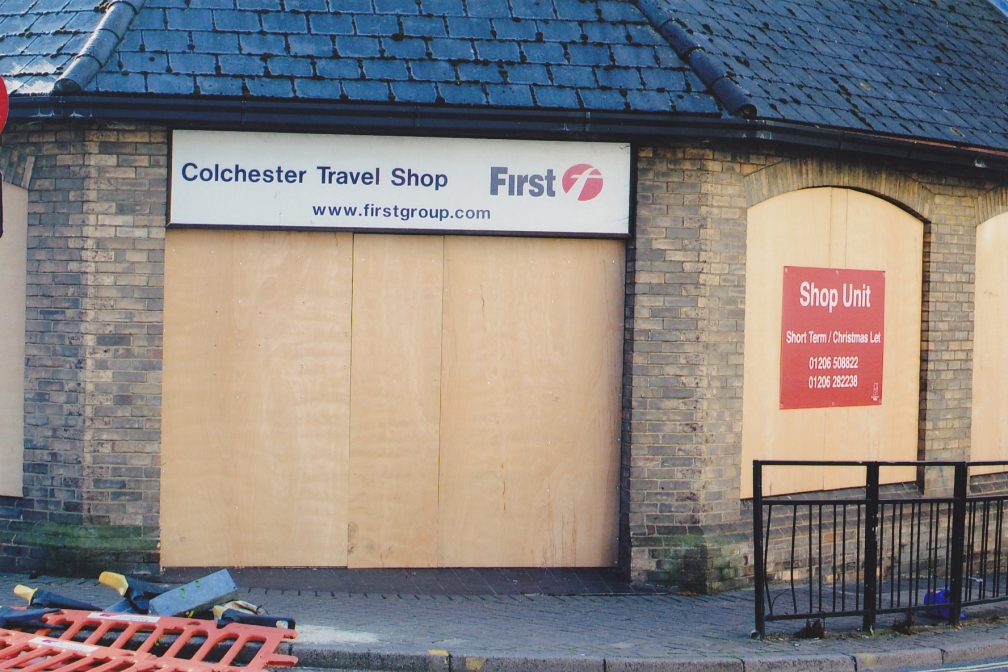 The old Colchester, Queen Street travel office, has been offered for short term “Christmas Retail” let (above), while the former workshop at Haven Road, is “For Sale or To Let”, through Nicholas Percival Estate Agents. Queen Street garage has been earmarked by Colchester Borough Council for further, non transport use.

GALLEON TRAVEL, HARLOW.
New is VDL Futura2 DK65 GAL.
It is named ‘In memory of Hoggy’. 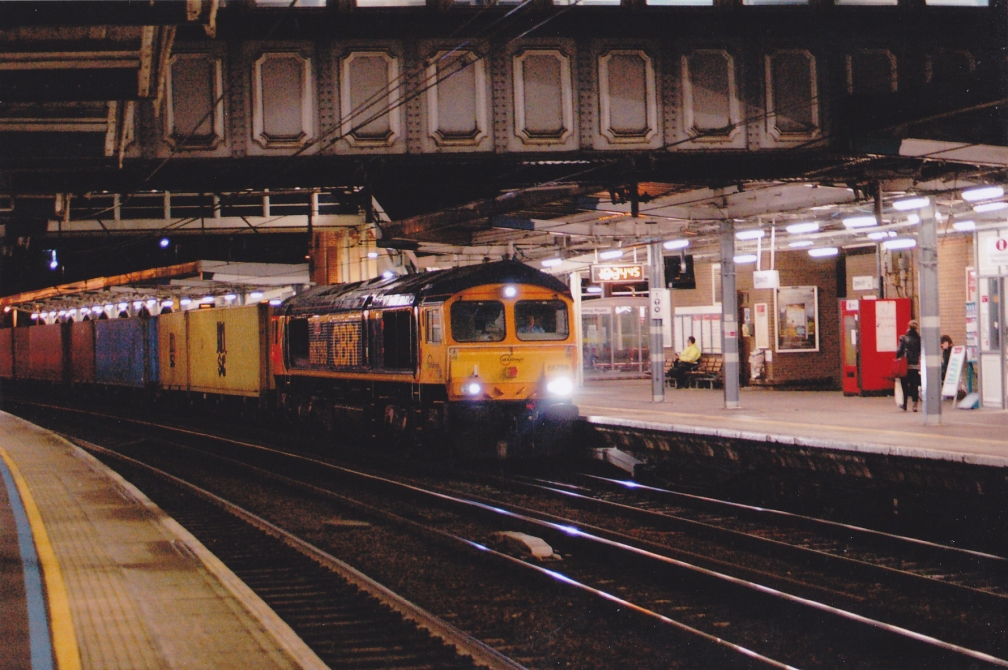 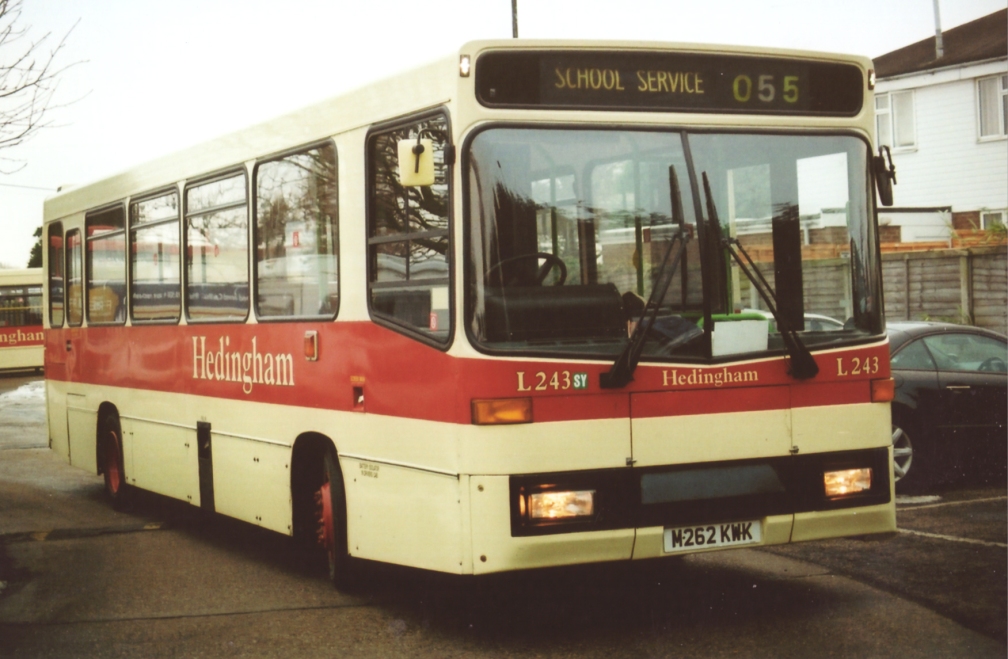 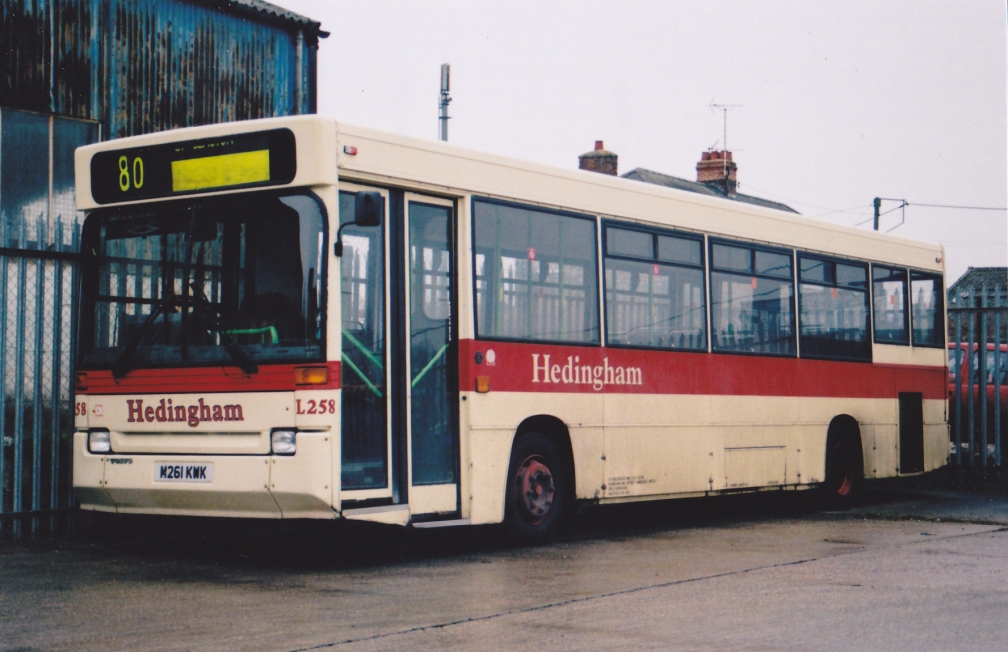 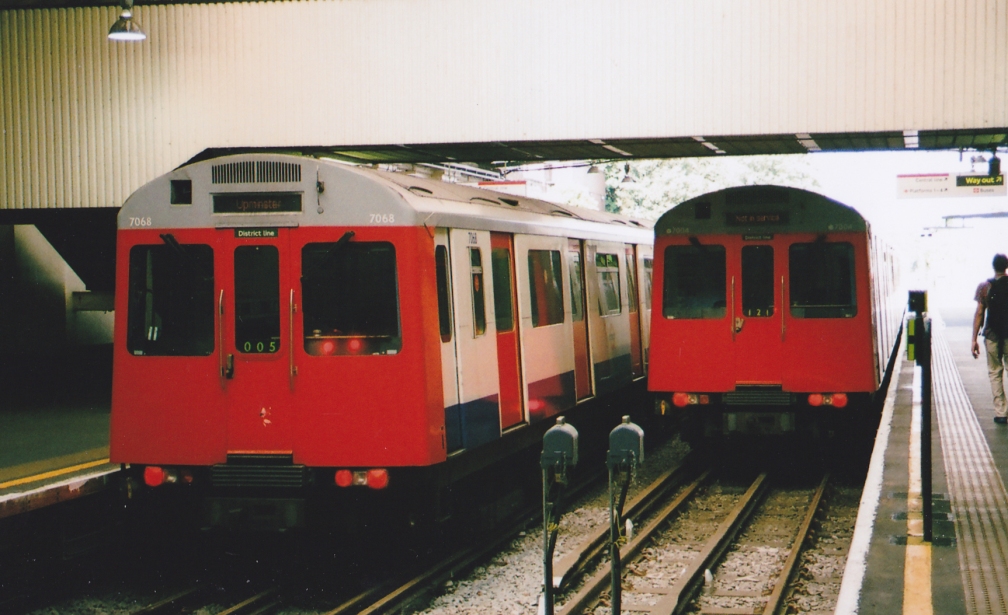 NATIONAL EXPRESS CONTRACTORS.
From 12/10/15, on Selwyns worked 350 (Liverpool-Southend), through journeys ceased from Stocksbridge and Chesterfield. 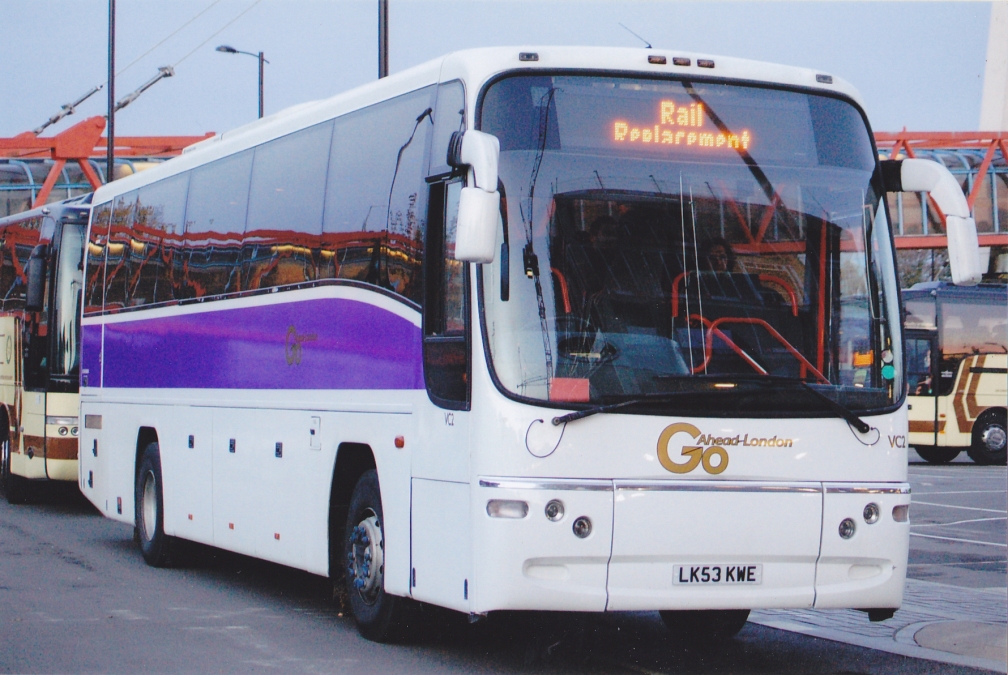 Volvo B12B/Plaxton Panther LK53 KWE is now with London General, Commercial Services, as fleet no VC2. It was seen (above), at Cambridge on 25/10/15; on GTR rail replacement. 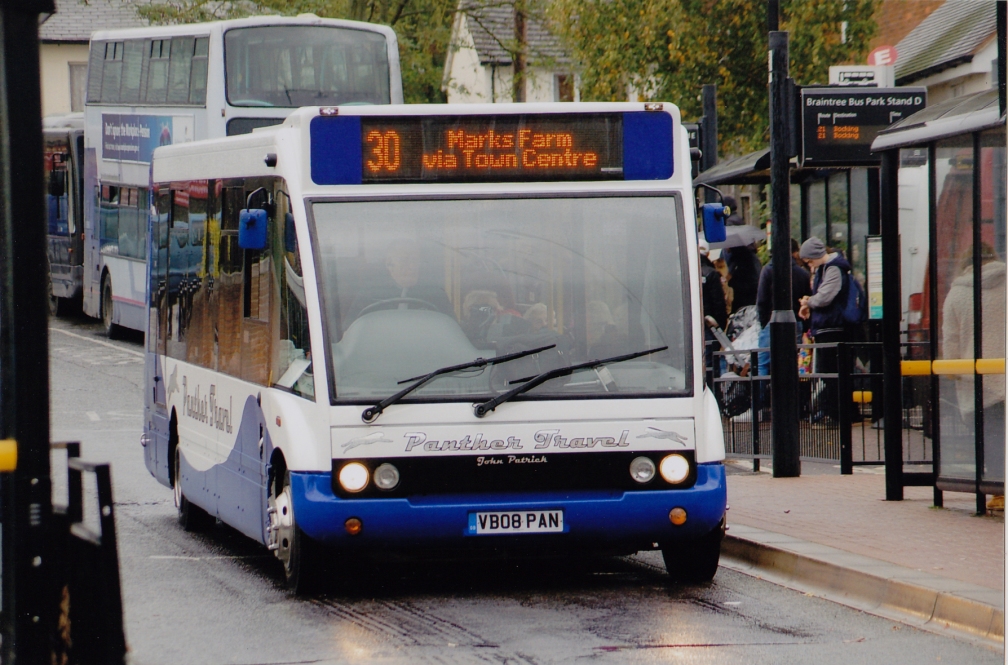 Has taken over Braintree town service 30 (Beckers Green-Marks Farm) from First.
It no longer serves Lakes Road, Chapel Hill or Stubbs Lane, as these are covered by other bus routes. Operation commenced on 19/10/15, initially with Optare Solo VB08 PAN, and is worked from Stansted depot. It is on Essex County Council contract, until April 2016 in the first instance. VB08 PAN was pictured (above), at Braintree Bus Park on 24/10/15. 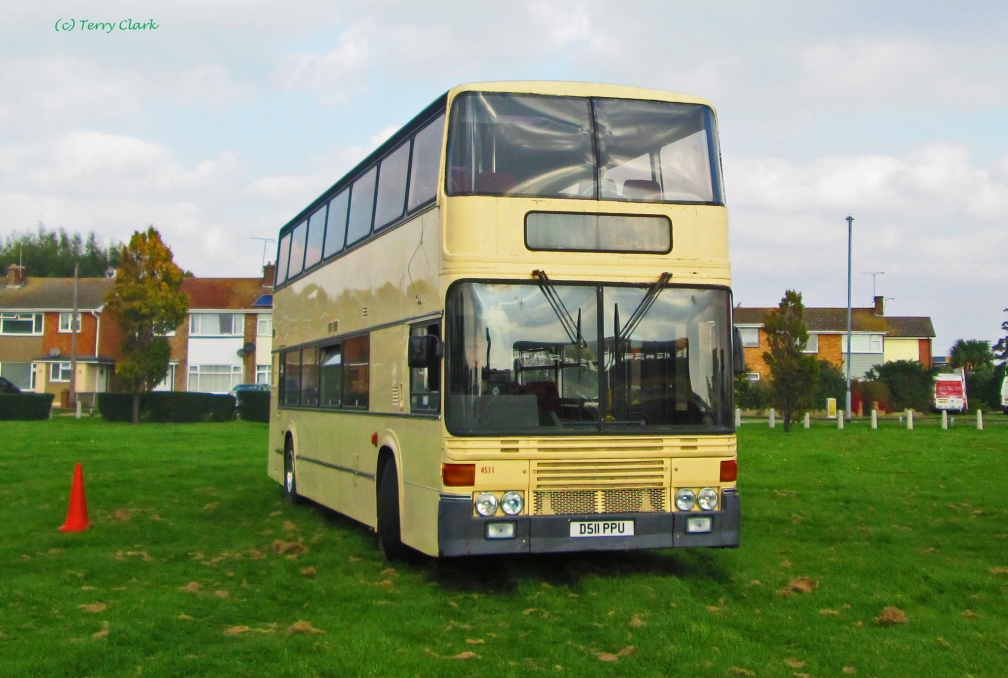 Leyland Olympian/ECW coach D511 PPU, has been acquired from Stephensons. It is pictured (above) at the Canvey Museum Open Day on 11/10/15. (Photo courtesy Terry Clark). It went for repaint into fleet colours, in late October.
From Stanley Travel, Durham is Dennis Dart/Plaxton Mini Pointer RX56 BWE. It is named ‘Stanley’, and has appeared on route 30.
Dennis Javelin/Plaxton Paramount BIG 8856 and SLF/Mini Pointer BIG 9856 have been internally refreshed.
Leyland Olympian/ECW BIG 9210 is withdrawn, and it has been re-registered back to CWR 512Y. 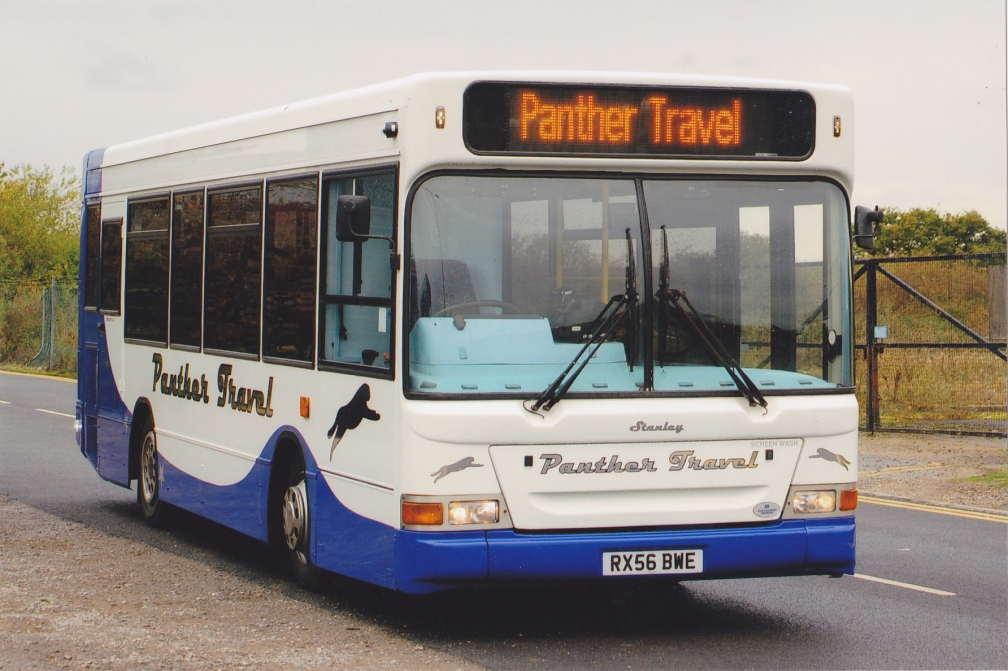 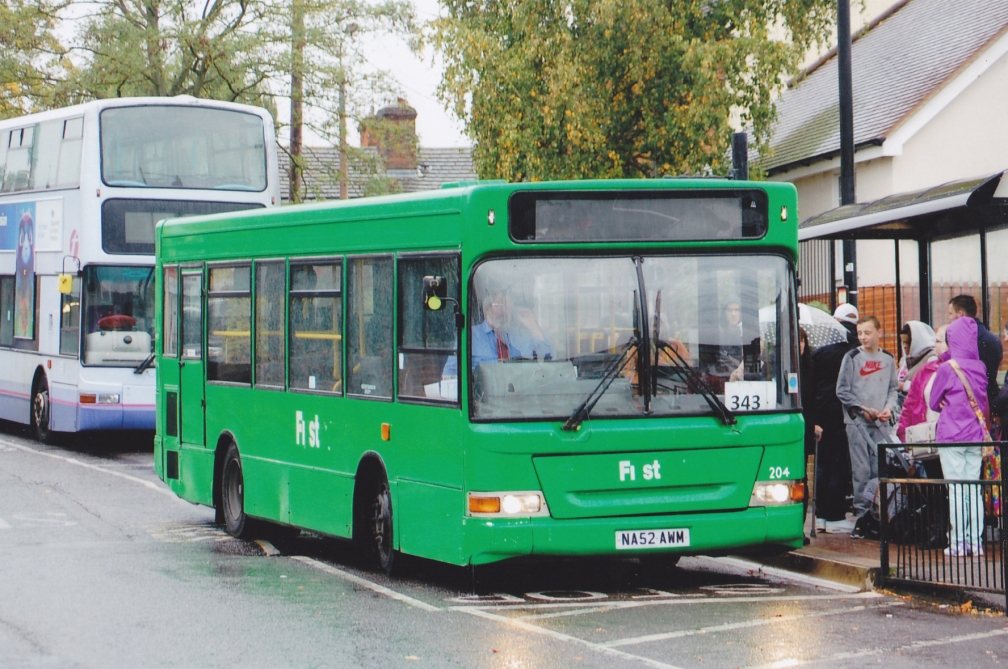 Above: One of two ex Western Greyhound Mini Pointer Dart SLFs acquired by Regal through Ensign; no 619 loads at Braintree on 24/10/15, en route to Terling and Fuller Street. This council supported service runs on Saturdays only.

SHELLEY PRIMARY SCHOOL, ONGAR.
Has Leyland Olympian/Roe CUB 69Y, via Ensign.
In its varied career, it was new to West Yorkshire PTE and then went “down south” to Metrobus at Orpington. It had latterly been “up north” again; at Garnetts of Bishop Auckland. 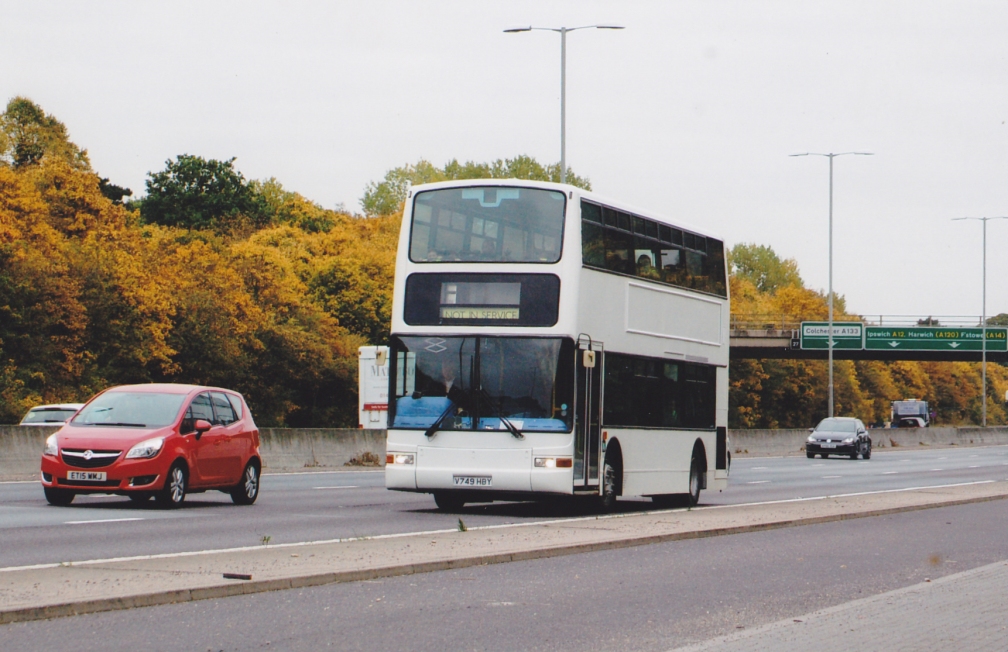 V749 HBY is an ex Metroline Plaxton President bodied Dennis Trident, supplied through Ensign.
It was pictured (above), on the A12 at Stanway, near Colchester, on 23/10/15. 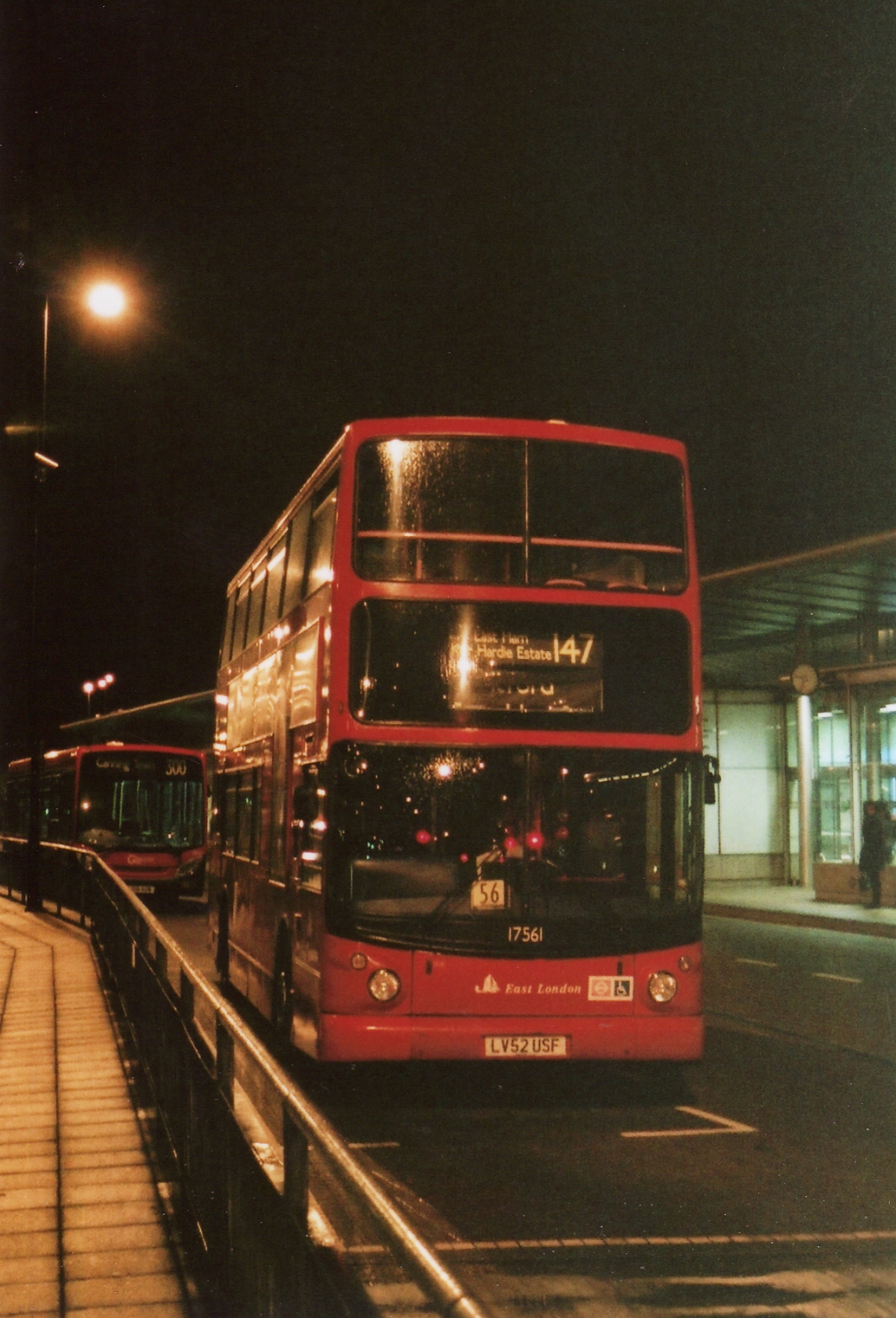 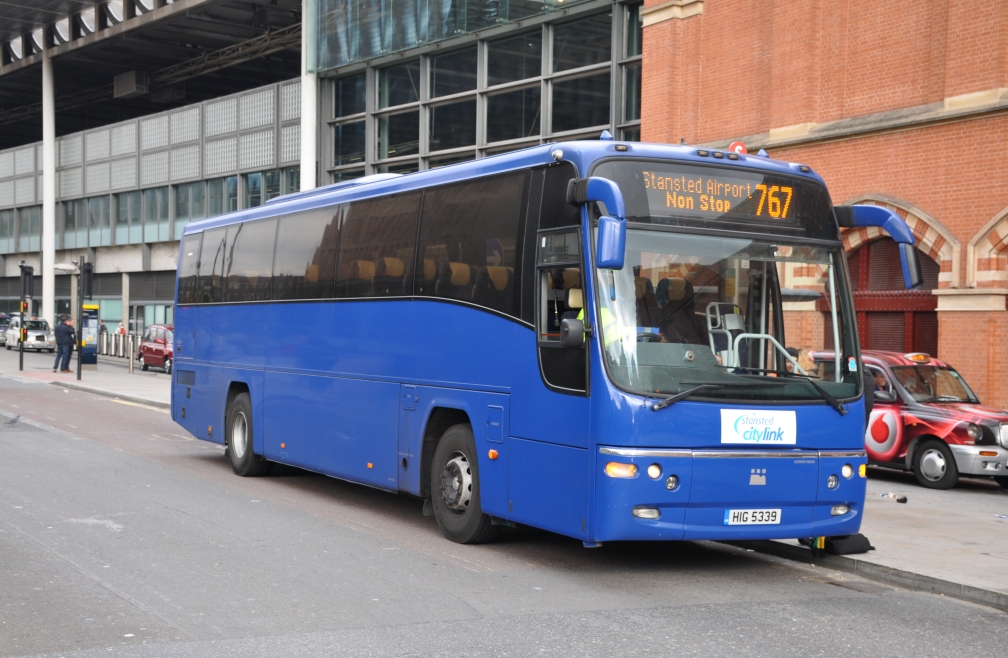 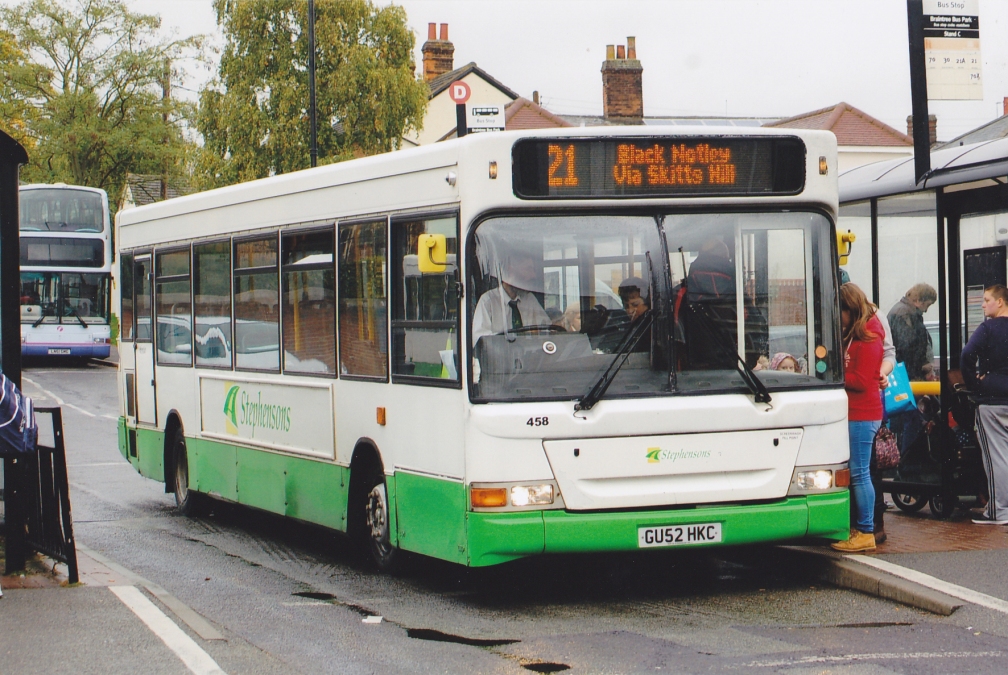 Has taken over a number of former First Essex commercial services around Braintree, and has established an outstation in the town, at Benfield Close. This was phased in, commencing 19th October.
It began with service 21 (Black Notley-Braintree) – Mon to Sat, hourly;
and for two weeks (19-31/10/15), 38A – an interim shuttle from Braintree Bus Park to Stubbs Lane, headway 60 minutes, Mon to Sat day times; in advance of the new replacements for 131/2 (Witham-Braintree-Halstead) starting from 2/11/15.
38A replaced part of the old First 30 route, most of which is now covered by Panther (qv). Newport Grammar School contracts 417/8 have also been transferred into Braintree, from Boreham depot. Full allocation for Braintree will be 5 saloons and 1 ‘decker, from 1st November.
Dart SLF/Plaxton Super Pointers 457/8 (GU52 HJY, HKC) moved from Haverhill to Braintree, while sister 456 (GU52 HJX) replaced SLF/Caetano 454 (HV52 WTE), as the route 247/Ipswich outbase bus in mid October, before long ADL/Enviro 200 464 (EU62 CDF) appeared. SLF/Caetano 453 (HV52 WTC) held sway at the end of the month. By this time, 456 had joined 457/8 at Braintree.
Ex Stagecoach Norfolk SLF/Pointer T593 CGT, entered traffic during October.
Meanwhile a vehicular acquisition is of ex Metroline, former First Centrewest Dart SLF/Caetano LK03 ULG, through Ensign. It has become a driver trainer, and retains red livery.
Long withdrawn Leyland Olympian/Alexander RL RUI 2590 (orig C379 CAS), latterly a storeshed, has gone to MC Tractors at Ramsey, Cambs for scrap. 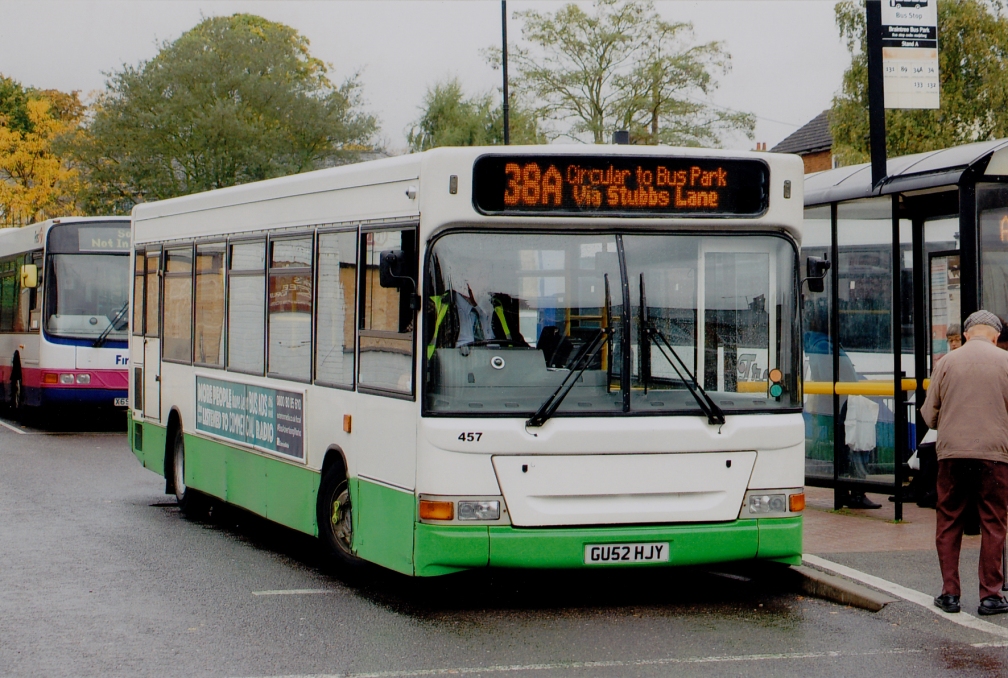 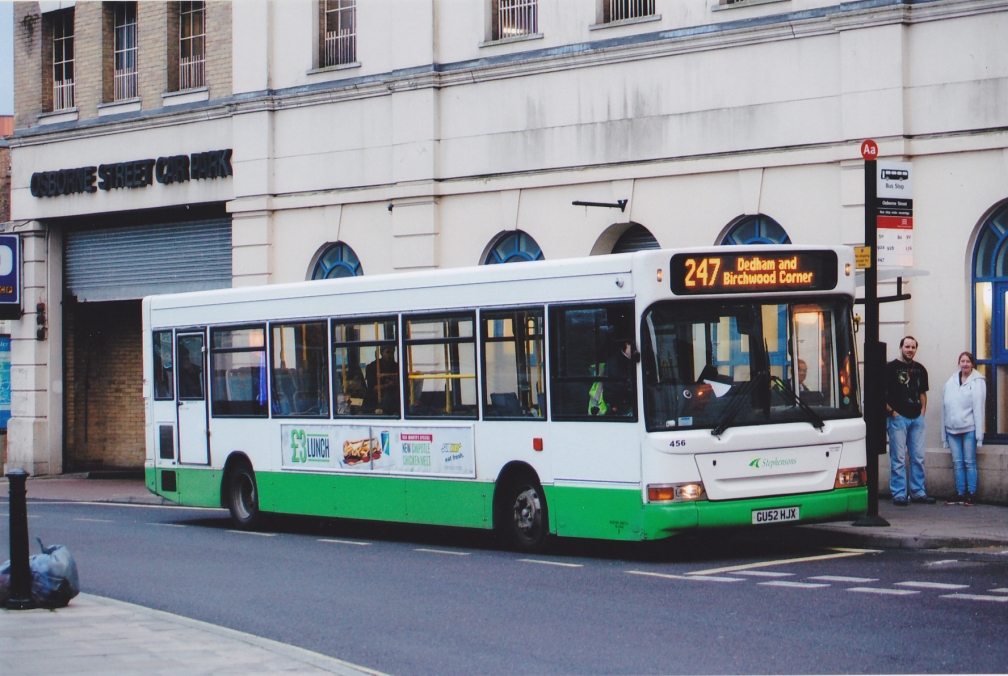 TALISMAN COACHLINES, GREAT BROMLEY.
A Van Hool TD824 double deck coach has been imported from Cyprus. It came from Xidias Coaches of Larnaca, and has Cypriut registration TVF 229.

TERRAVISION.
Has ceased terminating at Stansted Coach Station, and has moved to the mid stay car park for this purpose.

VICEROY OF ESSEX, SAFFRON WALDEN.
Sourced through Ensign is Volvo B10M/Plaxton Excalibur R154 SSN; ex Holloways of Scunthorpe.
Optare Solo CL52 CCL has joined the growing fleet of this type at Yeomans of Hereford. It is now used on ex First services, around its new home.