Welcome to the April 2016 edition of Busmopolitan.
The main news this month is of a major shake up of council contracted bus services across Essex. Arriva lost out in the re-tendering, while First, NIBS and Stephensons considerably gained. NIBS has won work beyond its traditional “patch” around Basildon. There has also been a significant shuffle of peripheral routes from “mainstream” bus operation to Demand Responsive Transport (DRT). Full details are in the main text.

Also significant is the projected sale of Galloway International Coaches of Mendlesham. The current directors wish to retire, and the new owner will be Eastern Transport Holdings (ETH); which is owned by Bill Hiron – also well known as the MD of Stephensons of Essex. Galloway was founded in 1965; and runs a mixture of local bus routes across south and mid Suffolk, plus National Express contracts and a quality coach fleet. The handover is proposed for Autumn 2016.

There have been big changes in the organisation of Arriva; with Arriva The Shires having been effectively split up into neighbouring areas. A by-product of this has been the transfer of all TfL red bus activities to Arriva London, and this includes the Grays depot of Arriva Kent Thameside. On a more local level, Arriva also looks to be phasing out the SxConnect brand. It is pictured (below), on Arriva Kent Thameside Volvo B7RLE/Wright no 3819; ascending North Hill, Colchester on 14/4/16. 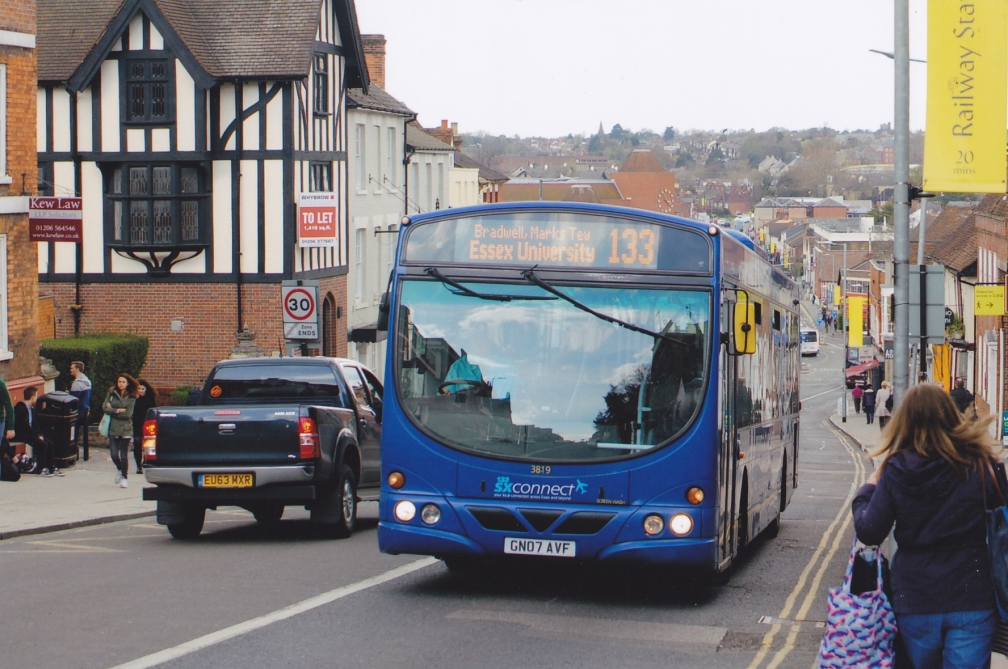 And Arriva has also won the contract to operate London Overground (LOROL) from November 2016. It beat competition from MTR (Arriva’s current venture partner on LOROL); Go-Ahead/Keolis and Metroline Rail.

ABELLIO GREATER ANGLIA.
Turbostar DMU 170204 was involved in a collision with a tractor, on the accommodation/level crossing at Roudham, near Thetford on 11/4/16. The train was working the 1203 Norwich to Cambridge service. 7 people were injured, including the tractor driver, who was seriously hurt. The front vehicle of the train was badly damaged. A subsequent investigation found that the tractor had been given permission to cross by a signaller at Cambridge Power Box; which is some 30 miles away. 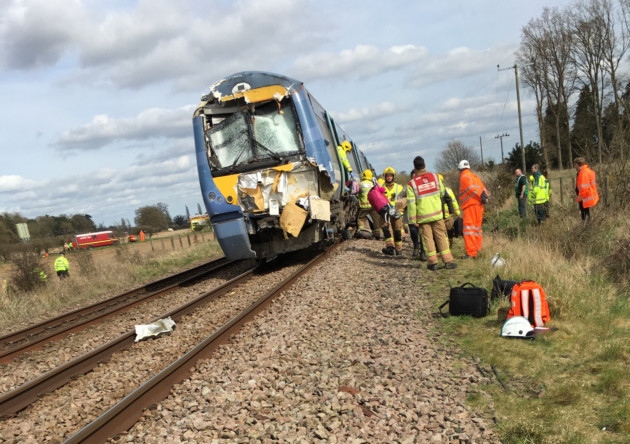 Virgin liveried DVT 82126 has been returned to its ROSCO, following completion of the DVT overhaul programme. 82112 was in the WB64 ‘Pretendalino’ set at the end of April.

Boeing VC-25 no 28000 was at Stansted Aiport 21st-24th April; in connection with the visit of USA President Barack Obama to the UK.

ARRIVA KENT THAMESIDE (GRAYS).
This operation has transferred to Arriva London North, as it only runs TfL contracts. Buses still retained ‘AKT’ legals at the end of April, however.

Above: VDL DB300/Wright Gemini2 no 6211 at Newbury Park LUL station on 5/4/15.
This bus was one of a batch new to Arriva London North, and transferred in August 2012 to Arriva Southend, (subsequently Arriva Kent Thameside) for the renewed TfL66 (Leytonstone-Romford) contract.

Above: Network Colchester Volvo B10BLE/Alexander ALX300 no 904, at Walton on the Naze rail station in October 2007.

BEESTONS.
Mercedes 1523L/UNVI SK07 LZD is ex Ridleys of Leamington Spa. It has been re-registered FHJ 565.

C2C.
On 25/4/16, the driver of a Grays to Fenchurch Street service, was taken ill when his Class 357 EMU train arrived at Barking. Regrettably, he subsequently passed away. It is believed the 56 year old, suffered a heart attack. Thoughts go out to all affected.

CARTERS, CAPEL ST MARY.
Acquired via Ensign is AEC PRV Routemaster RM2185 (CUV 185C). It had previously been with a preservationist.
From 11/4/16, services 93/94 (Ipswich-Colchester) had their terminus arrangements in Colchester changed. They now serve the whole town centre “loop”, and operate along East Hill both ways. Previously, Ipswich bound journeys had run via Magdalen Street and Brook Street.
Schools service 193 (Dedham-East Bergholt) has been moved over from the old Carters Coach Services, to a new company called Carters Heritage Buses 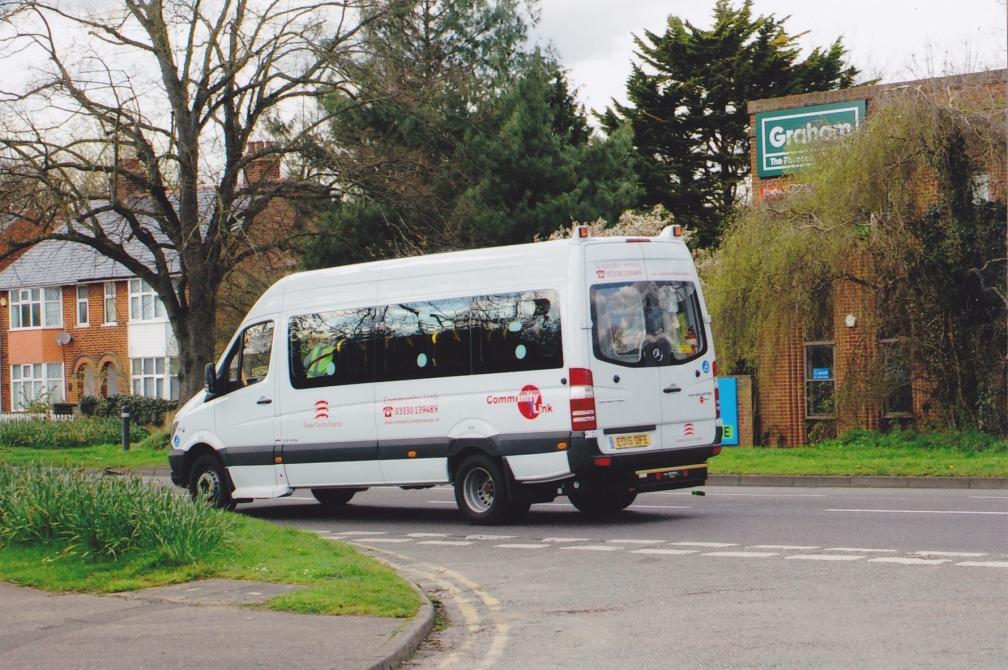 Above: EO16 DFE, one of Community Link’s latest Mercedes Sprinters. It was seen at Colchester on welfare duties, on 14/4/16.

CROSSRAIL.
As part of the upgrade, the stabling sidings at Shenfield are currently disconnected. There are extensive works taking place at the country end of Shenfield station.

EASYBUS.
Has suspended its London Waterloo to Gatwick Airport service.

EOS LONDON, RAINHAM.
The 66A Harlow-Waltham Cross commercial service, has been renumbered 86. 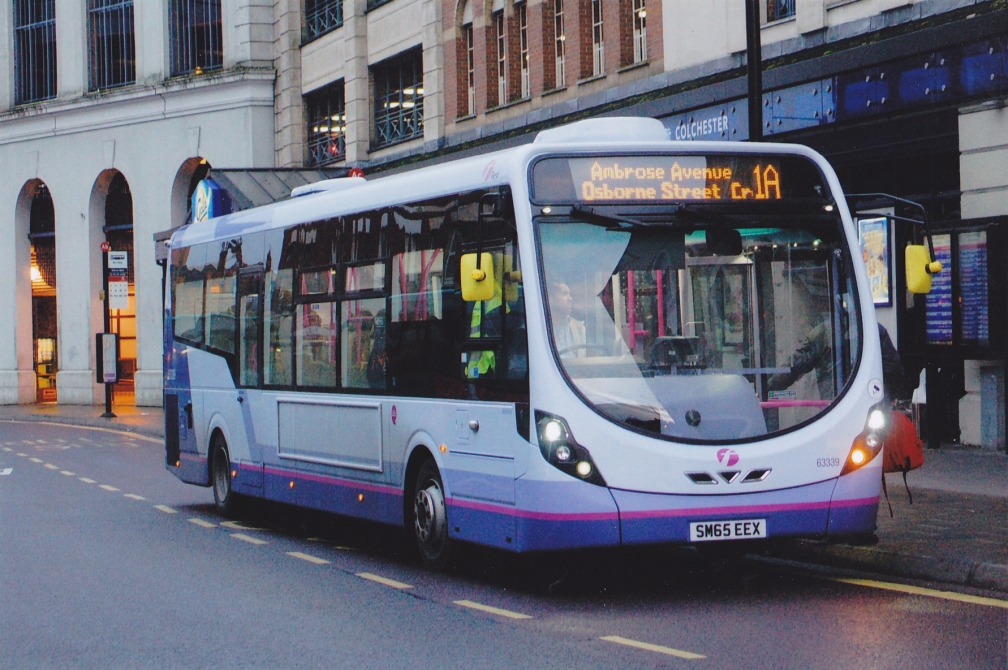 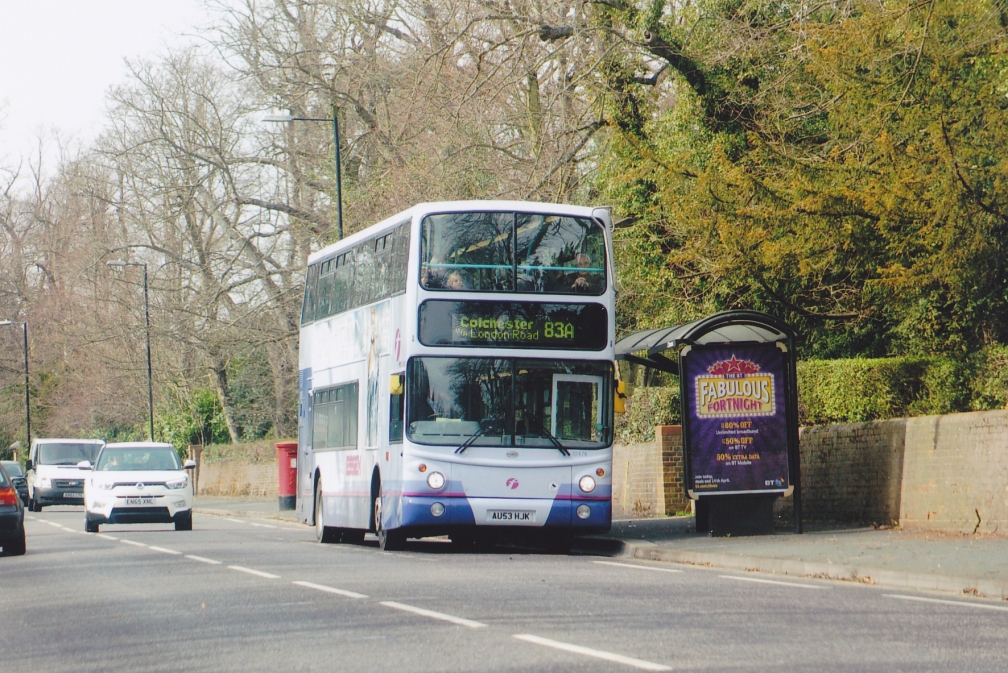 Above: On 1/4/16; the penultimate day of First Essex operation; Volvo B7TL/ALX400 32476 unusually appeared on 83/A, and is pictured heading into Colchester along Lexden Road. 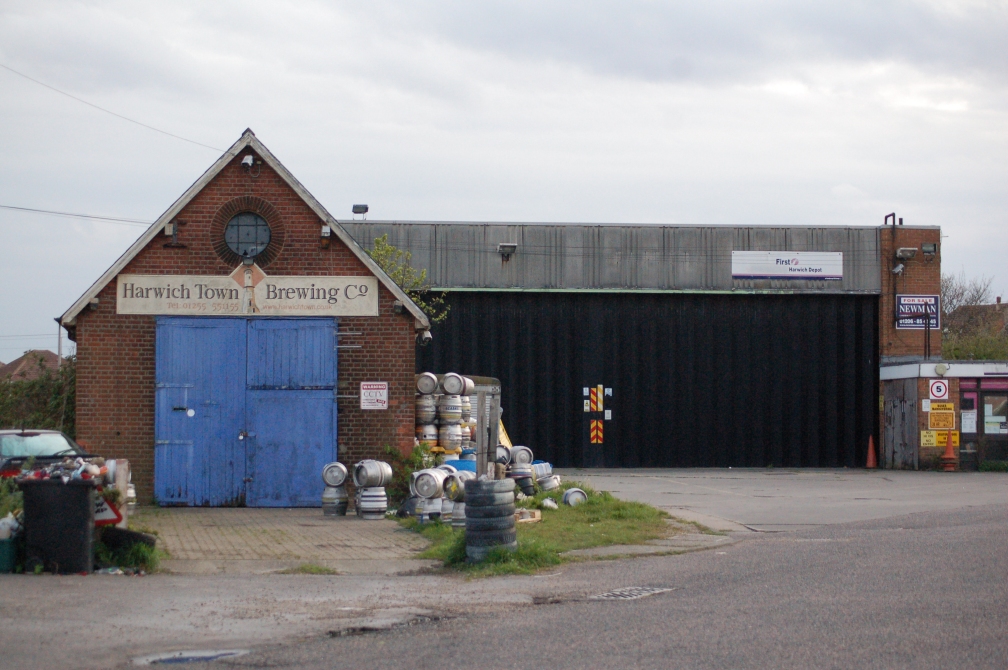 GALLOWAY, MENDLESHAM.
As mentioned in the editorial; this company is to be acquired by Eastern Transport Holdings (ETH), who also own Stephensons of Essex. 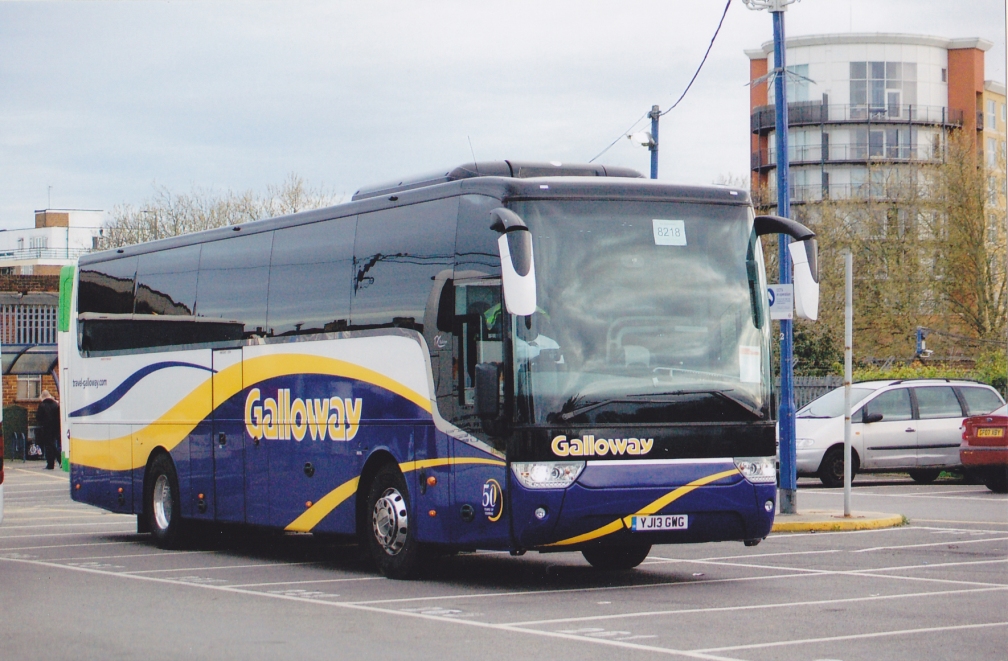 Above: Galloway runs some National Express contracts; including the 250 Ipswich-Colchester-Stansted-Heathrow service. Volvo B9R/Caetano Levante is seen at Southway, Colchester in October 2011; not long after the 250 was launched. 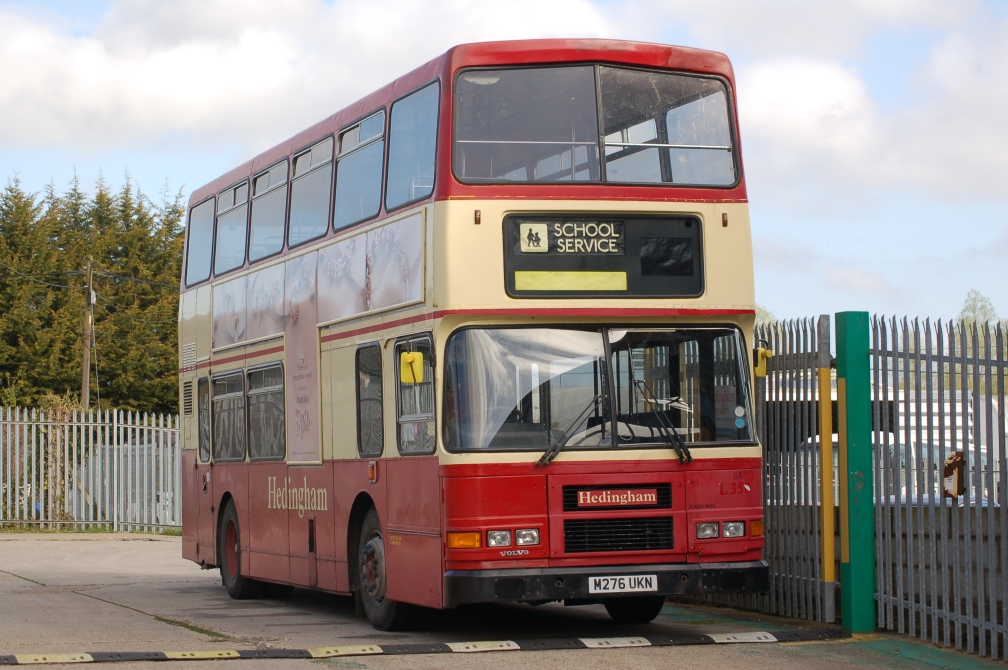 Above: Hedingham Dennis Dart SLF/Plaxton Mini Pointer L326, on the original 15 service, in April 2008. It was pictured at Cymbeline Way, Colchester. 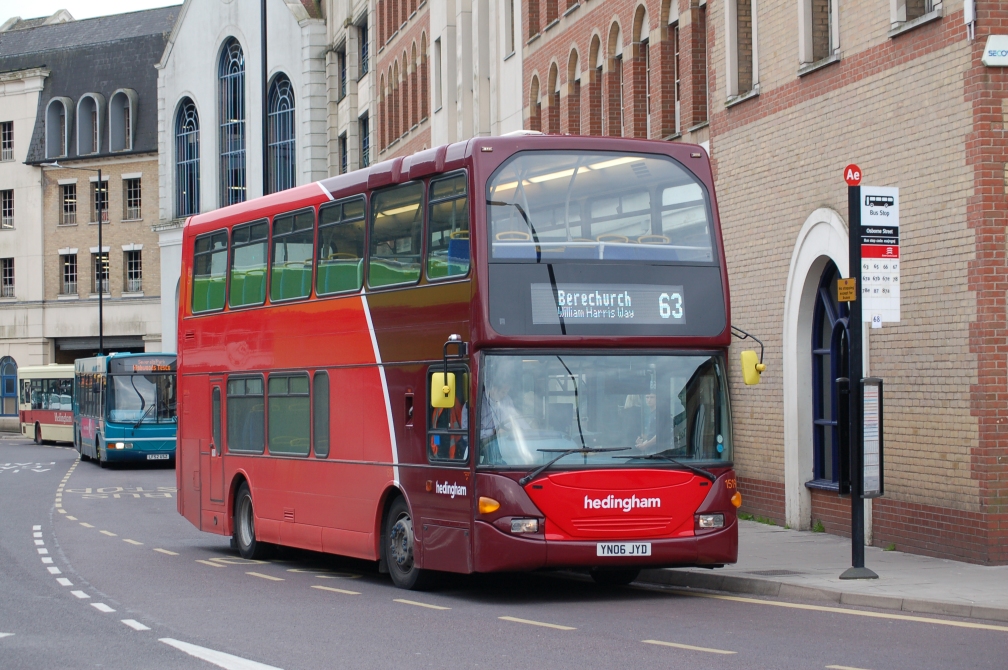 KEANE TRAVEL, MUCKINGFORD.
Neoplan Starliner N316SHD YN04 AUX is ex Johnsons of Worksop.
MAN13.220/Marcopolo KIG 1262 has been re-registered back to its original V311 EAL mark.It was seen (below) at Marks Tey Racecourse on 14/4/16. 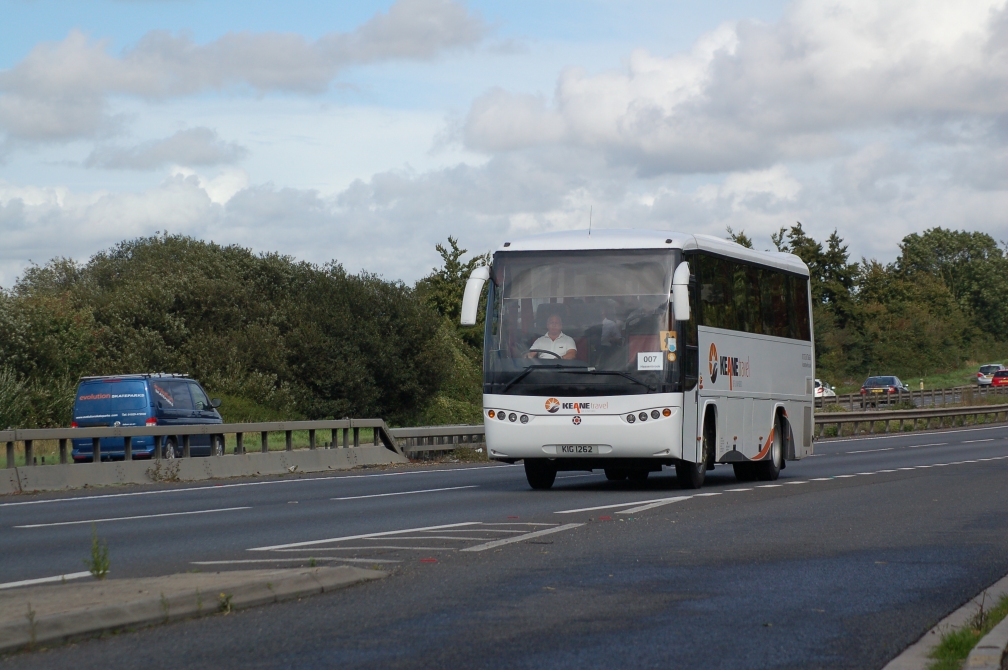 KIRBYS OF RAYLEIGH.
From Redwing of Camberwell are Mercedes Tourimos BJ59 OJD/F.

Above: Ex Lodge MAN14/EL FY52 PMV is seen in its new guise with Gordon Springate Transport Training, at the Detling Rally at Kent County Showground on 2/4/16. (D W Rhodes).

LONDON OVERGROUND – LOROL.
Arriva DB has won the new concession contract; from November 2016. Previously, this had been a joint Arriva-MTR venture.
EMUs 321413/4 have gone to Scotrail, as 320413/4; after reduction from 4 to 3 cars. 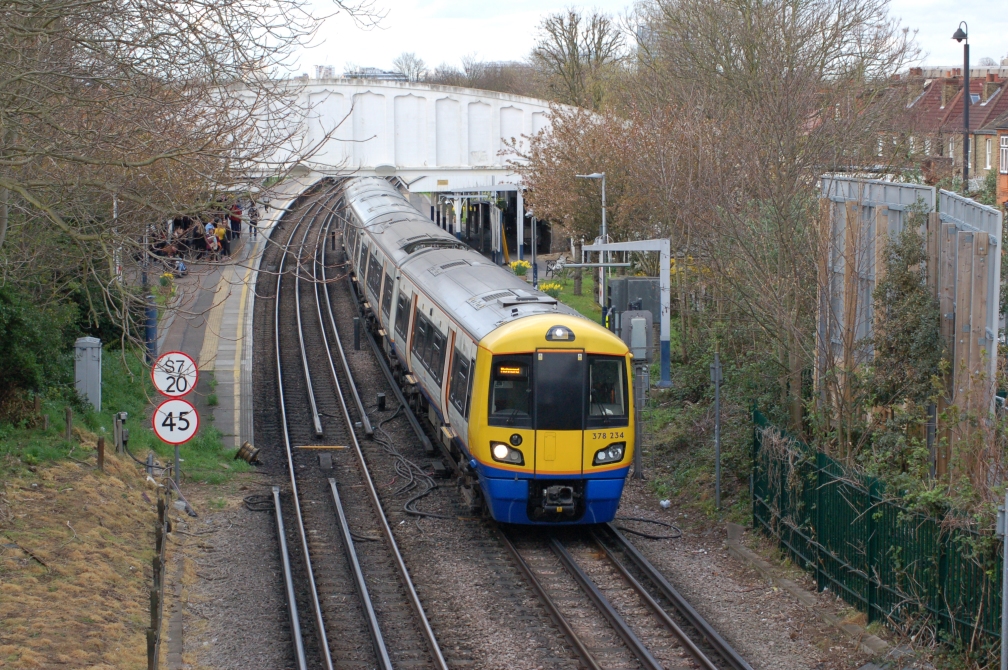 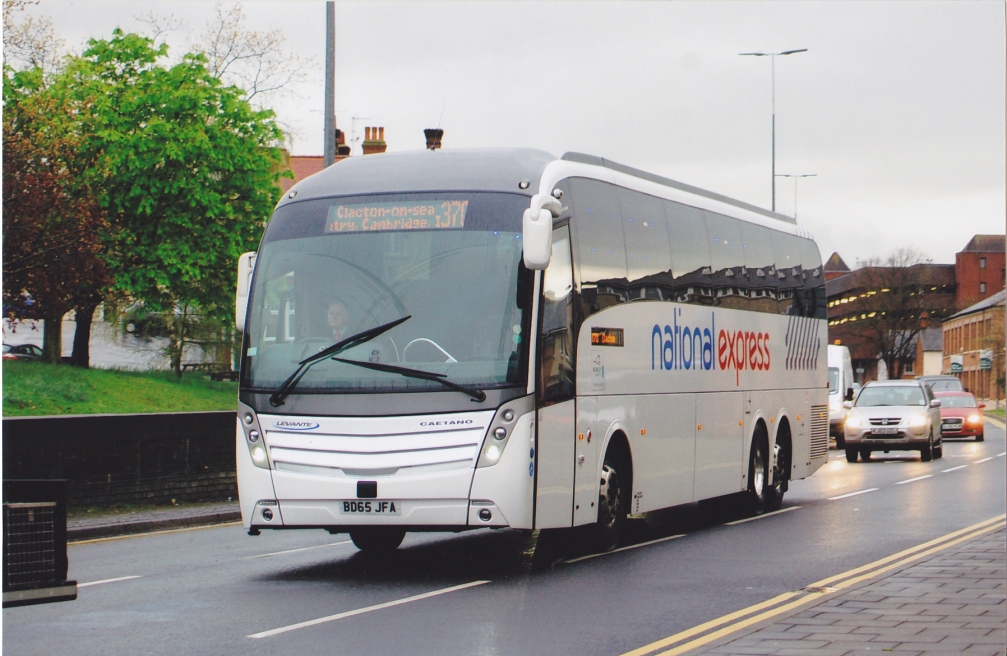 Above: Selwyns operated Scania K410EB6/Caetano Levante BD65 JFA, departs Colchester on 15/4/16; on a coastal bound 370 (Runcorn-Clacton) working. This was previously route 305 and before that 350; both of which had been Liverpool to Clacton.

Below: National Express Operations new Scania K410EB6/Caetano Levante no SH207, shows its rear steer to good advatage, as it reverses off a bay at Stansted Airport Coach Station on 16/4/16.

Route A6 (Stansted-Golders Green-Victoria) has been revised to call at Paddington and terminate at Marble Arch. A new link is A7 (Stansted-Waterloo-Victoria).
London United operated service A30/A31 (Stansted-London Victoria/Stratford) have ceased.
The former Galloway NX outstation at Clacton, in the old Appleby’s removals yard at Stephenson Road, has been redeveloped as industrial units. In the distant past, this location has also been used by Midi Hire. Galloway vacated the site in 2012, while Midi Hire ceased trading in 1999. 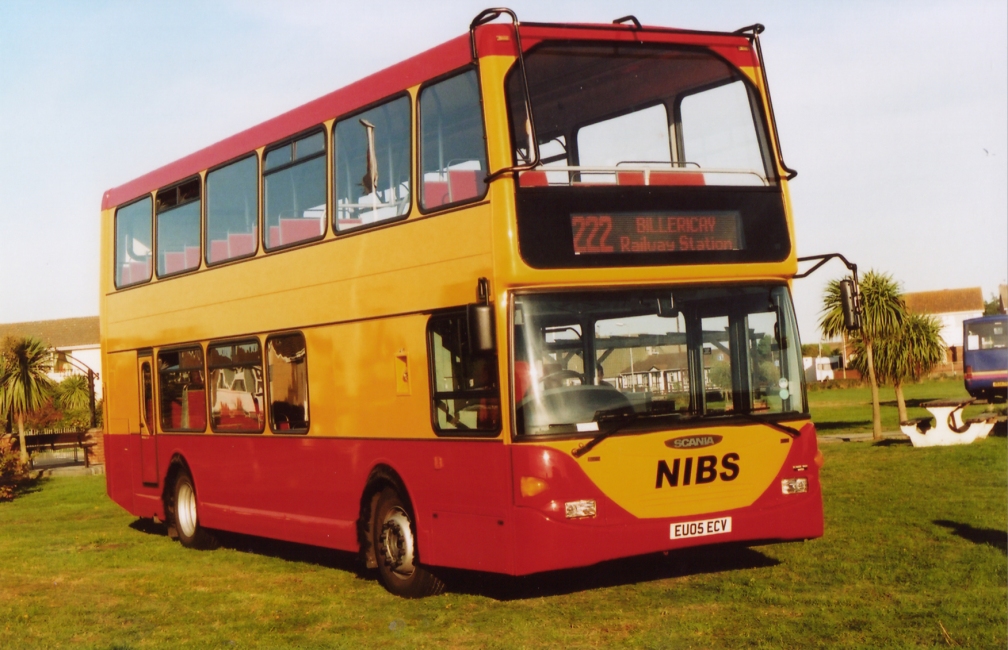 PANTHER.
Dennis Dart SLF/Plaxton Pointer VU02 TTZ is now DC02 PAN and named ‘Eeorye’.
Dart SLF/Plaxton Mini Pointer BIG 9248, has reverted to its original reg mark of W339 VGX; prior to sale. Volvo B7R/Plaxton Prima BIG 6002 has been offered for sale.
From 10/4/16; Essex CC route 247 (Colchester-Dedham) was gained from Stephensons, along with the Boxted-Colchester section of the old Stephensons service 80. They have become the following new routes; 80A (Colchester-Dedham) and 81/A (Colchester-Manningtree) – both are Mon to Sat.
From the same date, school days only 103 (Ramsey-Harwich) additionally served Parkeston Village and was renumbered to 118, while 30 (Beckers Green-Braintree-Marks Farm) passed to Stephensons, and 77A (Colchester-Great Bentley/Seawick) to Arriva Network Colchester.
Other traffic changes at this time saw:
119A (Point Clear-Brightlingsea – schooldays only) – withdrawn.
314 (Great Dunmow-Braintree – Wed and Sat) – withdrawn. Replaced by Arrow Taxis East Uttlesford DRT service.
315 (Stebbing Green-Great Dunmow – Thu only) – withdrawn. Replaced by Arrow Taxis East Uttlesford DRT service.
446 (Manuden-Saffron Walden – schooldays only) – gained from Arriva, having previously been subcontracted.
446B (Clavering-Newport – schooldays only) – gained from Arriva.

Above: Dennis Dart SLF/Plaxton Mini Pointer BIG 9856, departs Norman Way, Colchester on 9/3/16 – on the schooldays only extension of route 77. The usual Colchester terminus is Tufnell Way.

Above: Regal Dennis Dart SLF/Plaxton Pointer KP02 PVD, loads at Duke Street, Chelmsford, on a Writtle bound 45 on 26/6/15. This is an Essex CC evening/Sun/hol contract.

Above: Dennis Dart SLF/Plaxton Mini Pointer no 615, departs Harlow Town railway station, on 17/4/16. Regal runs Harlow local services on Sundays and public holidays, but these Essex CC contracts are due for renewal in April 2017. Arriva operates these routes commercially at other times.

ROMAN COACHES, COLCHESTER.
Bova Futura YJ08 VPC is now V22 ROM. It is the Colchester United FC team coach.
The CUFC contract had previously been with The Kings Ferry of Gillingham, Kent.

Above: One of the Scania Omnicities sold to New Adventure Travel of Cardiff, through Ensign; former no 15159 was pictured at Newport, Gwent on 16/4/16. (M Flynn).

Above: Volvo Olympian no 830 at Feering on 21/4/16; en route to Colchester to take up an afternoon school service. 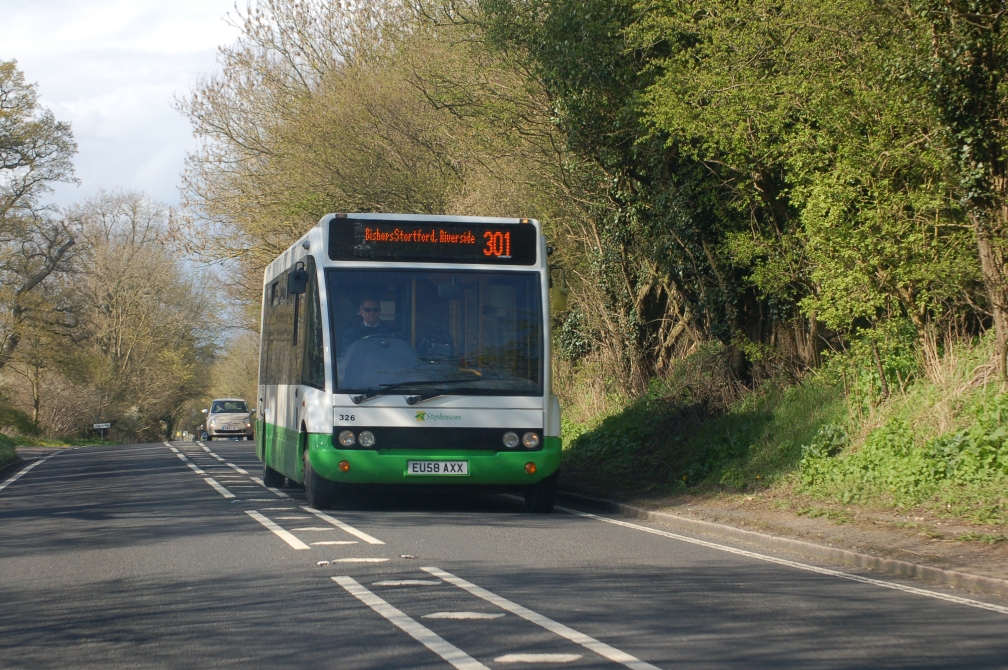 Above: Stephensons gained route 301 (Saffron Walden-Bishops Stortford), from Arriva, at the end of March 2016; as reported in March ‘Busmopolitan’. This view on 23rd April, shows Optare Solo no 326, departing Ugley, on a southbound journey.