Welcome to the July 2017 edition of Busmopolitan.
In late July, the UK government announced that from 2040, new “straight” fossil fueled vehicles would no longer be sold in the UK. This is in line with other European countries, such as France. From a bus point of view this will mean more hybrid and pure electric types; a species now spreading across London, but still less familiar in provinces. And there are other forms of propulsion available, including hydrogen, solar and even wood acid.
The end of conventional diesel and petrol power won’t happen overnight though. It will likely be a protracted affair, like to ousting of step entrance buses by low floor vehicles from 1999 onwards. This was not completed until low floor became law for registered bus services from 1/1/17.
Go-Ahead London has opened a new depot at North Greenwich, not far from the O2. At Morden Wharf, this replaced Mandela Way, which was located on the old Bricklayers Arms railway goods yard. On the fringes of the Busmopolitan area, the Mandela Way routes were distributed between the new depot and other local garages, including Docklands Buses at Silvertown. This happened on 13/7/17.
Also on the edge of the area covered by this website, the Anglian Bus depot at Ellough near Beccles has closed, with only outstation facilities remaining. Maintenance and paying in have moved to New Rackheath (Norwich) and Konect at Dereham, with Hedingham additionally carrying out some repairs on vehicles.
A long term rail replacement has started at Northumberland Park station in north east London. Running until Autumn 2018, it utilises a shuttle bus, while the level crossing is replaced by a footbridge and the area generally modernised. Panther Travel has the contract. 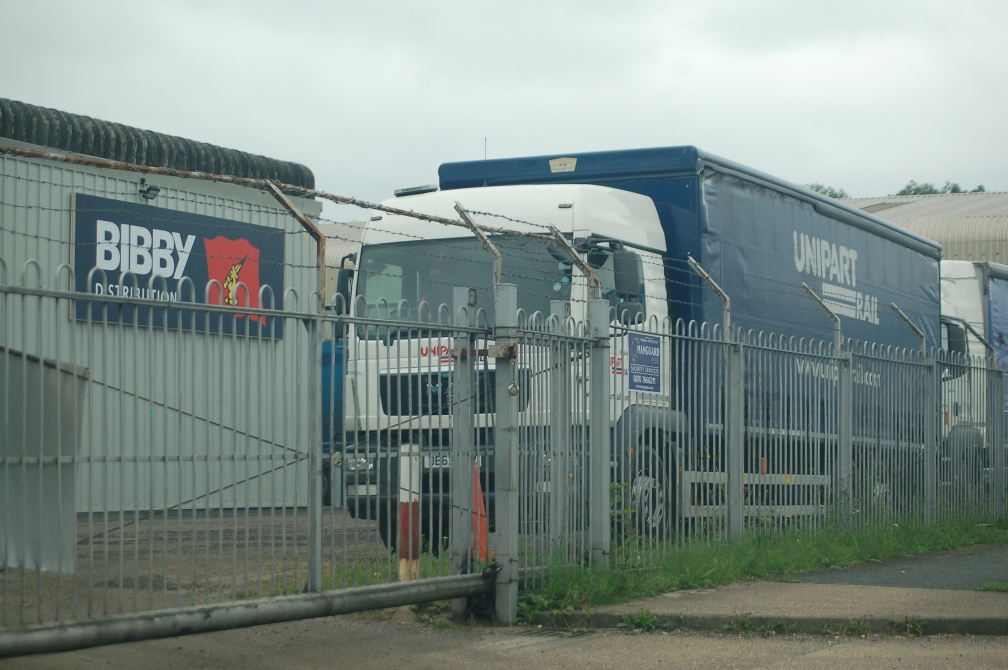 (John Podgorski).
The sub yard is now used by Bibby Distribution for its Unipart Rail contract.

ARRIVA LONDON NORTH.
Edmonton (EC) depot closed operationally on 14/7/17, but continues for storage and engineering. The premises at Towpath Road had originally been opened as a bendybus base in 2003, for TfL149 (Edmonton Green-London Bridge); and TfL34 (Walthamstow-Barnet) was also initially worked out of there when Arriva regained that contract. There were two previous London bus depots in the area; at Lea Valley Trading Estate (ED) – for the erstwhile London Suburban Bus (1994 to 1997 – and later taken over by MTL London Northern and ultimately Metroline), plus the original Edmonton London Transport garage at Tramway Avenue. Coded EM, this closed in 1985.

Above: One of the more quirky corners of Edmonton depot, seen in July 2004. (John Podgorski). 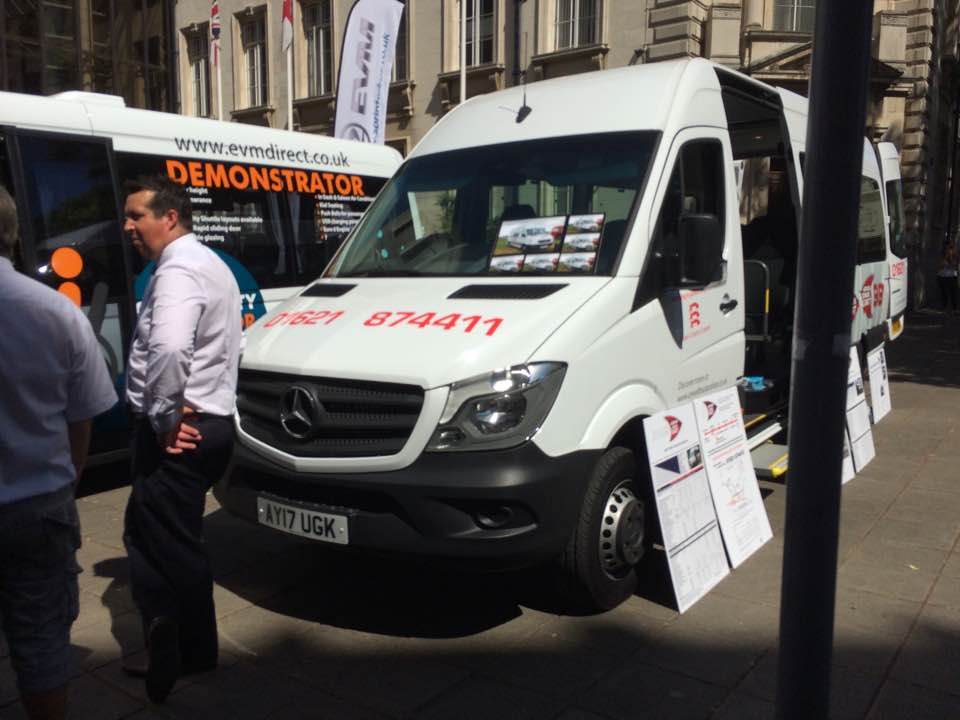 BLUE TRIANGLE.
The first of the ex East London Transit Volvo B9TL/Wright Geminis transferred to Metrobus, for X26 to be converted for its new role, is WVL334. All initially ran in “as acquired” condition.
Delicensed are Marshall Capital – Dennis Dart SLFs DMN10, 14.

On hire from Maymist Coaches, Barking between 14 and 21 July was Volvo B12B/Caetano FH05 URP. This was new to National Express. It was covering Bova Futura T322 KNN.
John Podgorski spotted FH05 URP on the A12 south at Marks Tey Racecourse, on 17/7/17.
The Regal yard at Millhead Way Rochford, is being used for overflow parking. The main Blueline yard is at Welton Way.
Volvo B7TL/Wright Gemini LF52 ZND is currently delicensed and stored at Millhead Way. With it on 29/7/17 was ex NXWM B7TL/Plaxton President V427 MOA.

DOCKLANDS BUSES.
Following the closure of the London General depot at Mandela Way (MW) on 29/7/17, TfL100 (Wapping-Elephant and Castle) is now operated.

Above: Mandela Way site seen in May 2004, before it became an operational bus depot. The Metrobus former London Central Volvo Olympians were stored there. (John Podgorski). 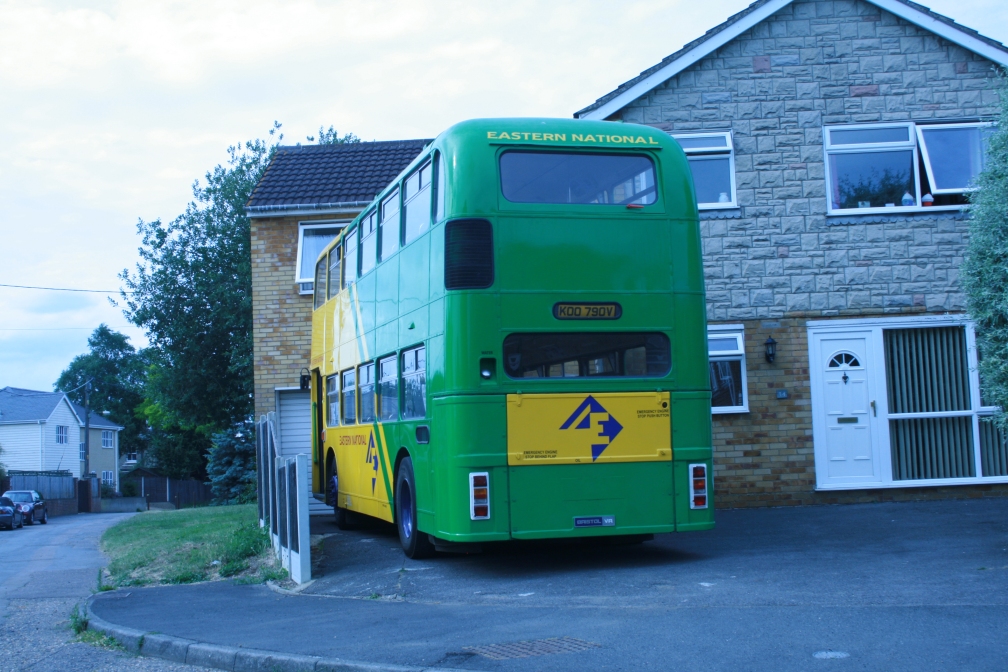 Above: The two-axle BCIs are now on local bus services around Thurrock. No 142 at Lakeside Bus Station on 29/7/17. (Simon Austin).

EOS LONDON.
ADL/E200 MMC 8.9m demonstrator YX17 NXA was on loan in late July.
Dennis Dart SLF/Caetano Nimbus LK03 NLT has been broken up for spares, having not been used.

EOS took over service 61 (Brentwood-Blackmore) from Ensign from 21/7/17. This poster was at Blackmore. (Daniel Disbury).
From 22/7/17 route 87 (Harlow-Staple Tye-Epping) was revised to improve connections with London Underground at Epping.

ESSEX LUXURY COACHES, ROCHFORD.
Vehicles noted are Mercedes Touro SK57 CHX in gold and Mb 0814D Y30 CHT in silver/black. The Touro is kept at Rettendon, due to space limitations at the main Rochford OC.
The Rettendon site is on the plot previously used by Elite Engineering some years ago.

Above: One of the original First Ipswich Park and Ride buses; Volvo B7RLE 69430 is seen after repaint into standard livery. Caught on Norwich Road on 18/8/12, on the former ‘Superoute 88’ to Stowmarket. First initially ran Ipswich P and R between 2008 and 2012. (John Podgorski).

Above: The “new” Ipswich Park and Ride buses came from First Borders on the Scottish/English border, where they had been displaced by the sale of this operation to West Coast Motors. ADL/Enviro 300 67779 was seen at Carlisle on 15/5/17. This did not go south. (Murdoch Currie). 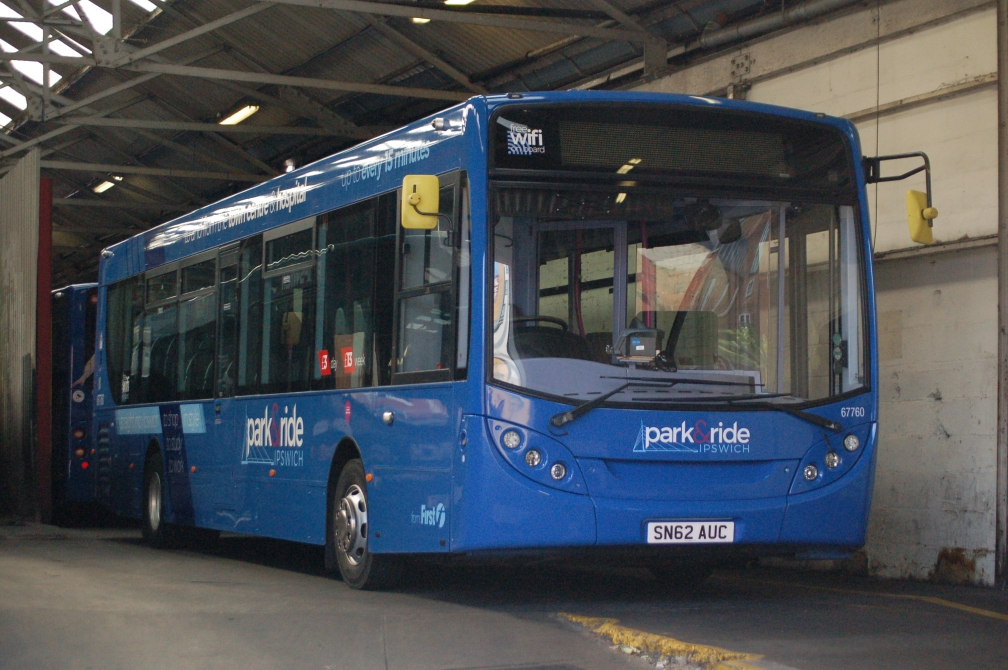 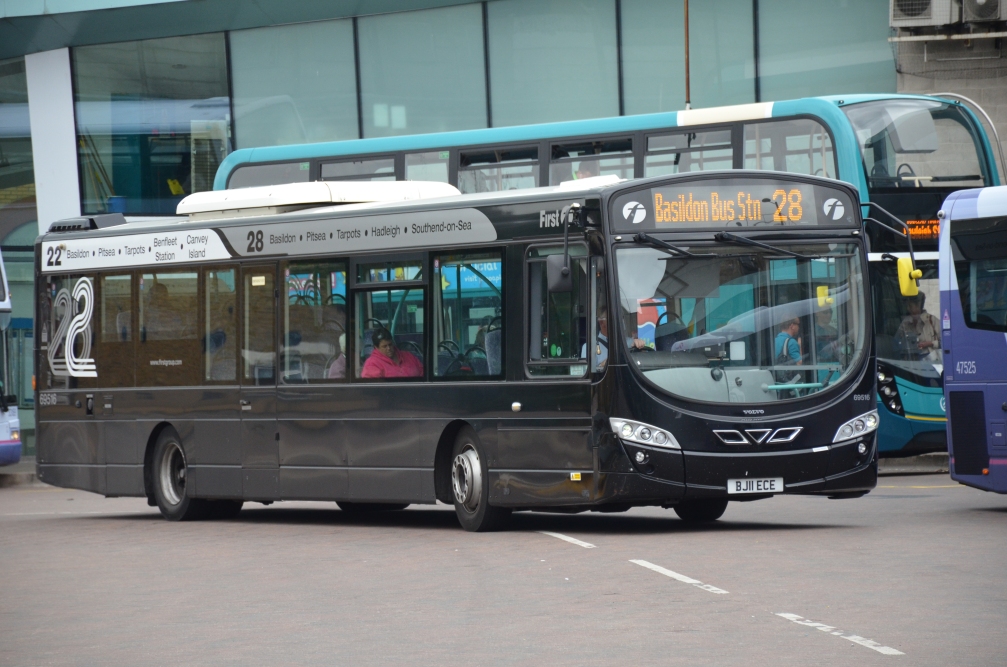 ECC routes 11 (Aveley-Basildon), 374 (Grays-Basildon) were gained from Ensignbus from 1/7/17. Ensign had run them as emergency contracts following the collapse of Amber Bus.

The first sighting of a 62 branded Volvo B9TL/Wright Gemini2 “off route” was on 3/7/17, when 37134 (SN57 HDJ) appeared on 65 (Highwoods-Tollgate) in the evening peak. 37135 (SN57 HCU) appeared on 24th July, again on the pm peak.
Not all of the ex First Borders Volvo B9TL/Wright Gemini2s were in service by July – 37138/39 outstanding, so a variety of buses continued on 62/A (Colchester-Brightlingsea) – including single deckers. The standard substitutes on 62/A are the ex Leicester 54 plate B7TL/Geminis. 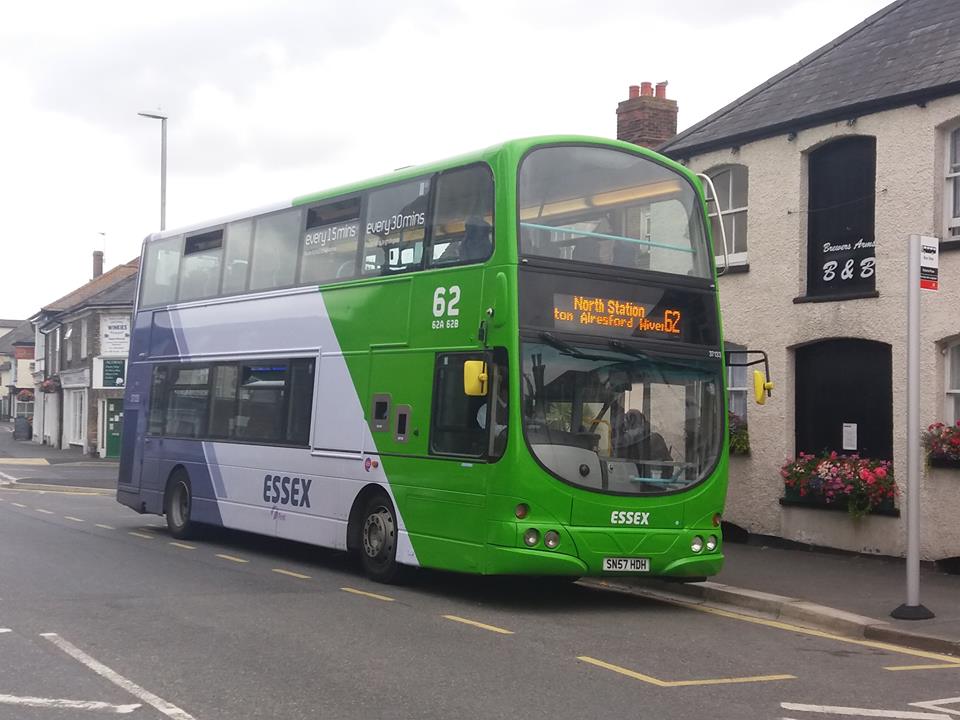 On 2/7/17, youth orchestras performed in the old Queen Street bus garage in Colchester, which had closed in August 2015.

Dennis Trident/Plaxton President 33086 (LN51 GMG) is long term VOR at CR with and engine fault, and will eventually be repaired. 33184 (LR02 LZD) is back in use at CR after a replacement engine was fitted at an external location.
Further crew ferries for Colchester (CR) are Vauxhall Movano minibuses FA17 EYM, FM17 YNS – downseated to 8 from 14. These have replaced the Renault Trafics.
Plain white Ford Transit Custom hi cube van BT17 YUR has been noted at Hadleigh (HH). It was supplied via Lex Automotive. 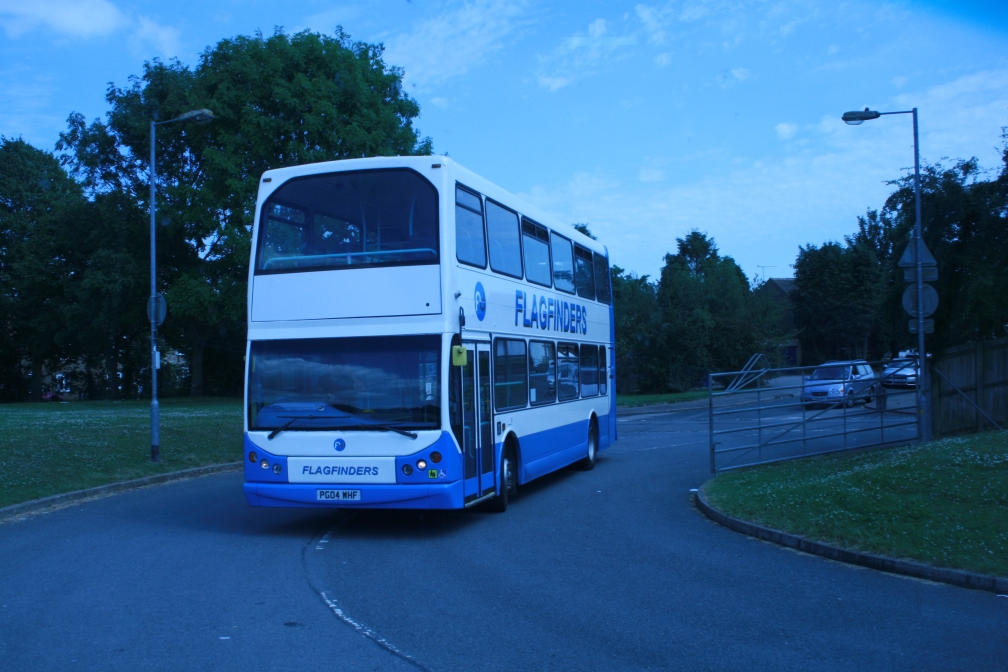 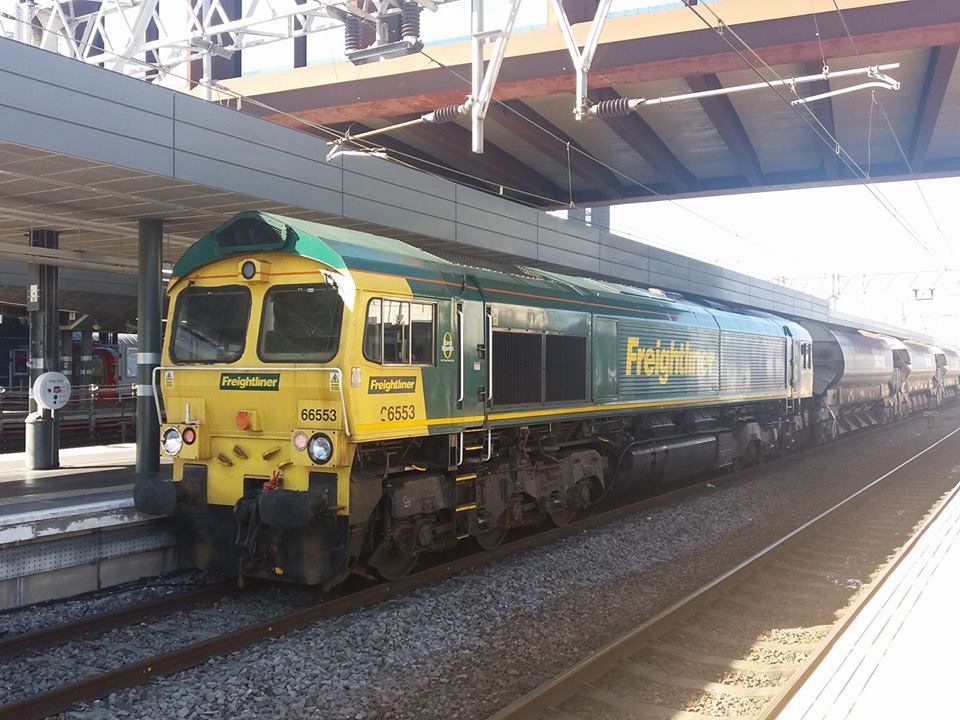 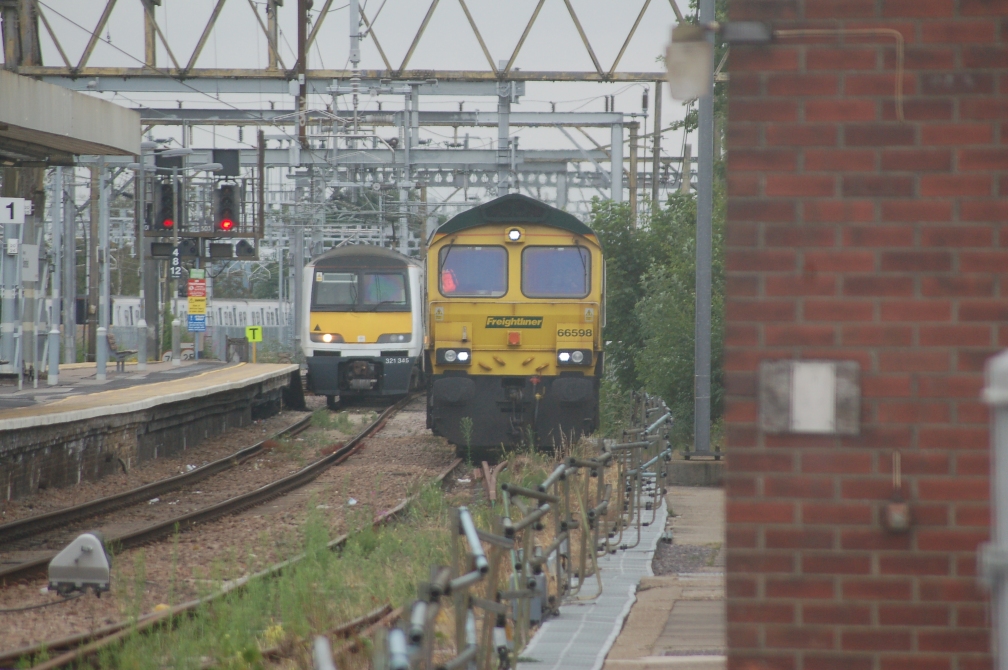 GALLOWAY, MENDLESHAM.
FJ12 FYA is a Volvo B9R/Caetano Levante from National Express, for continued use on NX work. It has fleet no 362. It has replaced accident damaged FN62 CAA. 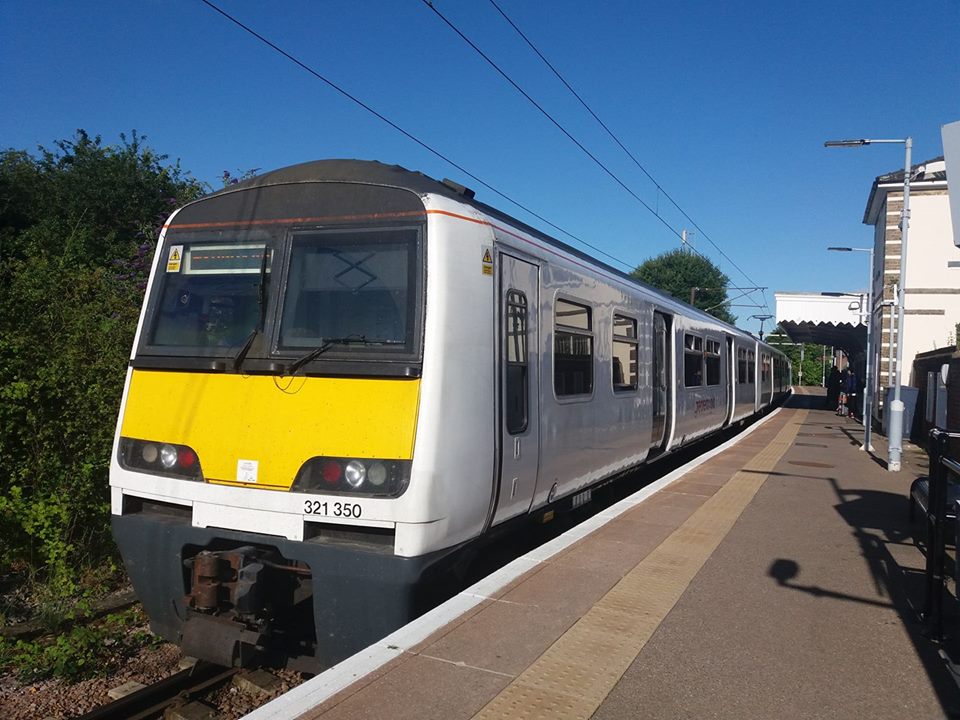 The first of the Renatus refurbished + re-tractioned Class 321 EMUs have entered revenue service. They are 321303/04/21.

HEDINGHAM.
From 24/7/17, partial responsibility for maintenance of Anglia Bus vehicles was taken on. This is because Anglian Ellough site has been downgraded to an outstation and storage facility only. Most functions have transferred to New Rackheath and Konect at Dereham. From the same date, operation of 63/A (Berechurch-Colchester-Mason Road/North Station) was transferred wholly from Clacton (CN) to Sible Hedingham (HD). This was only for the six week summer school holiday however.
The Alec Hunter Academy-Silver End contract has not been renewed. This is due to diminished loadings for 2017/18. 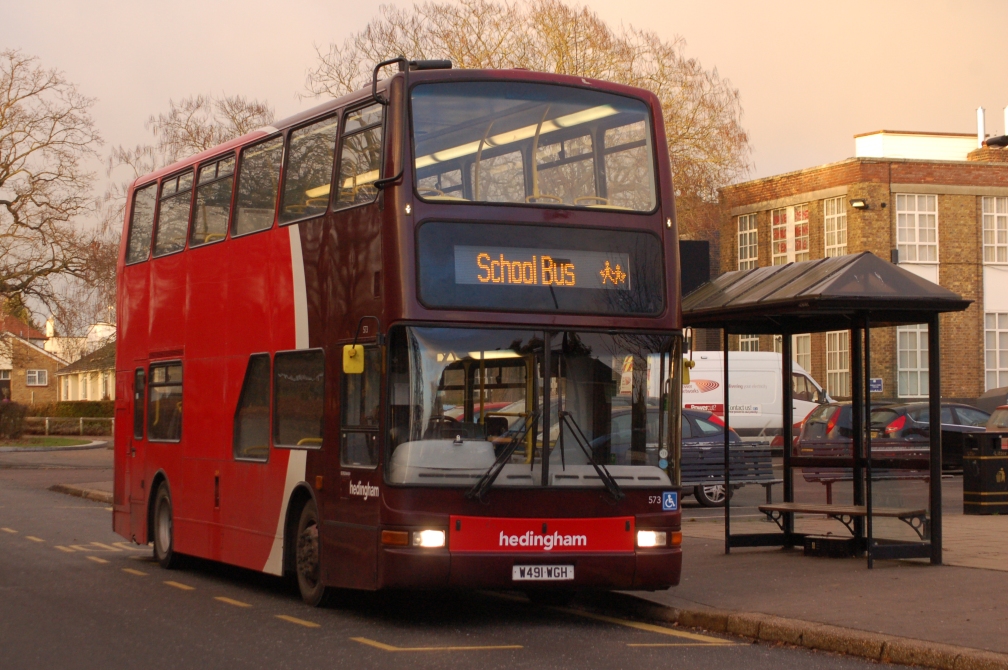 Above: Volvo B7TL/Plaxton President 573 at Silver End Broadway on 4/1/17, having just arrived on the afternoon run from Alec Hunter Academy. (John Podgorski).

Dennis Trident/EL 723 (W823 NNJ) has been repaired for further service from HD.
Ford Transit 16 seater YT12 RBZ has been returned permanently to Robertson Van Hire off loan, as it is no longer required. The school contract on which it was used (Toppesfield), specifies a larger vehicle for 2017/18. 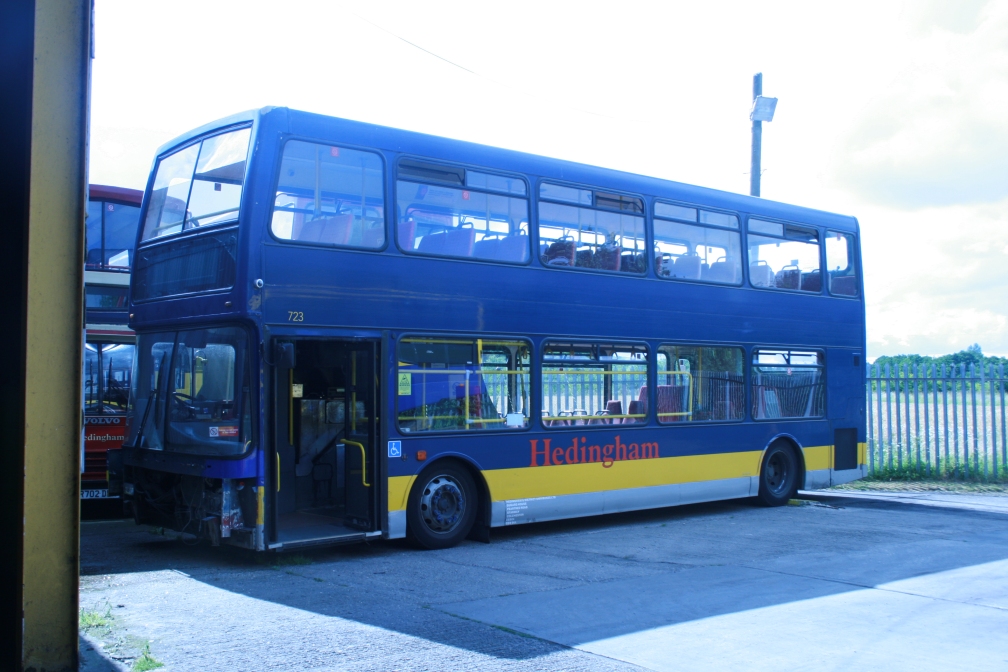 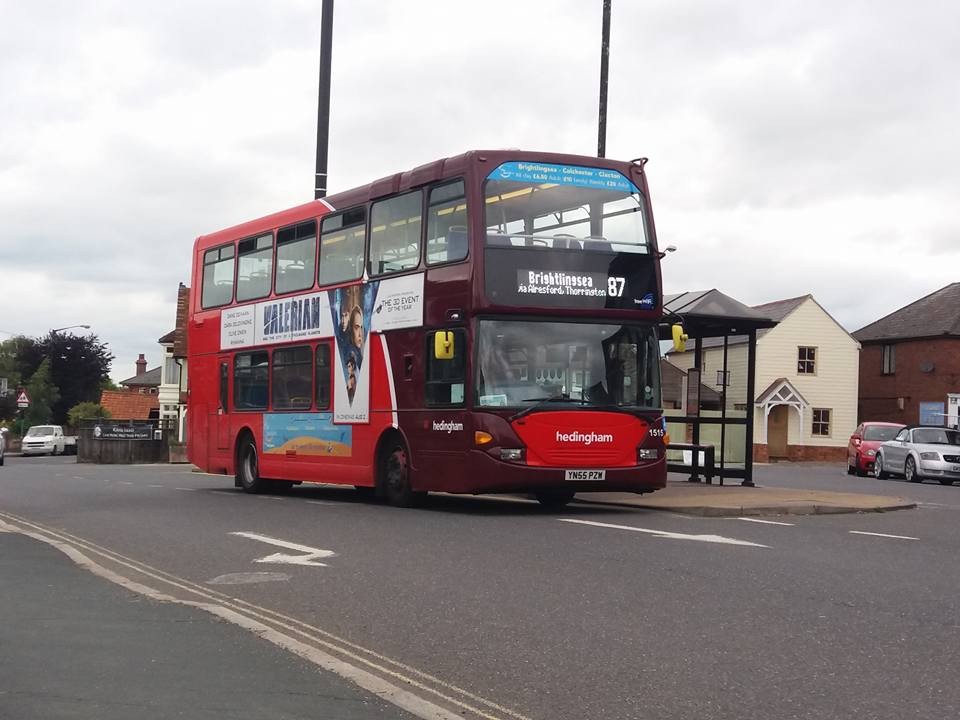 KINGS TOURS, COLCHESTER.
Irizar i6 demonstrator YN63 ZHR has been on loan from Irizar at Worksop. It had previously been at Woods of Leicester.

LONDON CENTRAL.
From 29/7/17, most of the duties on TfL108 (Lewisham-Stratford) were transferred from New Cross (NX), to the new London General depot at Morden Wharf (MG), along with the MEC Class Mb Citaros. NX retains 2 lines, along with evening Lewisham-Greenwich shorts. The latter uses WVLs off TfL321.

A Southend seafront service, numbered 68, was registered from 24/7/17, for the school holiday period. Volvo B7TL/Plaxton President PVL224 (Y824 TGH) is the regular bus, with B7TL/Wright Gemini WVL93 (LF52 ZNE) as reserve. These are both open toppers. There was an official launch at Southend on 19th July.
The illustration (by David Arnold), shows PVL224 passing Southend Pier on 25/7/17.

MISCELLANEOUS.
A verdict at Chelmsford on 17/7/17, concluded that the death of the lorry driver, whose truck crashed off Colemans Bridge at Witham in February, was accidental.
Mr G Johal, aged 30 – who was a technician at the local branch of Harris Truck and Bus, was taking the MAN articulated vehicle on a pre MOT test drive when the accident happened. The truck had a load which was a sealed ISO container. The vehicle’s owner had advised it contained a generator – when in fact it was an uninterruptible industrial power supply with many batteries. This resulted in an unusually high centre of gravity, which in turn caused loss of control on the right hand bend on the bridge. A “conventional” load, with a lower centre of gravity, would not have resulted in loss of control.
Colemans Bridge fully reopened in early July. There is once again access to the A12 southbound at Witham North junction.

NATIONAL EXPRESS.
From 24/7/17, 350 (Liverpool-Southend) was revised to run as Liverpool-Stansted Airport. 370 (Runcorn-Clacton), became Birmingham-Clacton from the same date. The contractor has changed from Selwyns of Runcorn to Chalfont of Uxbridge.

PANTHER TRAVEL.
Acquired is ex CT Plus ADL Enviro 400/Optare Olympus PN08 SWJ. It is now led destination fitted and converted to single door. It was supplied via Ensign. 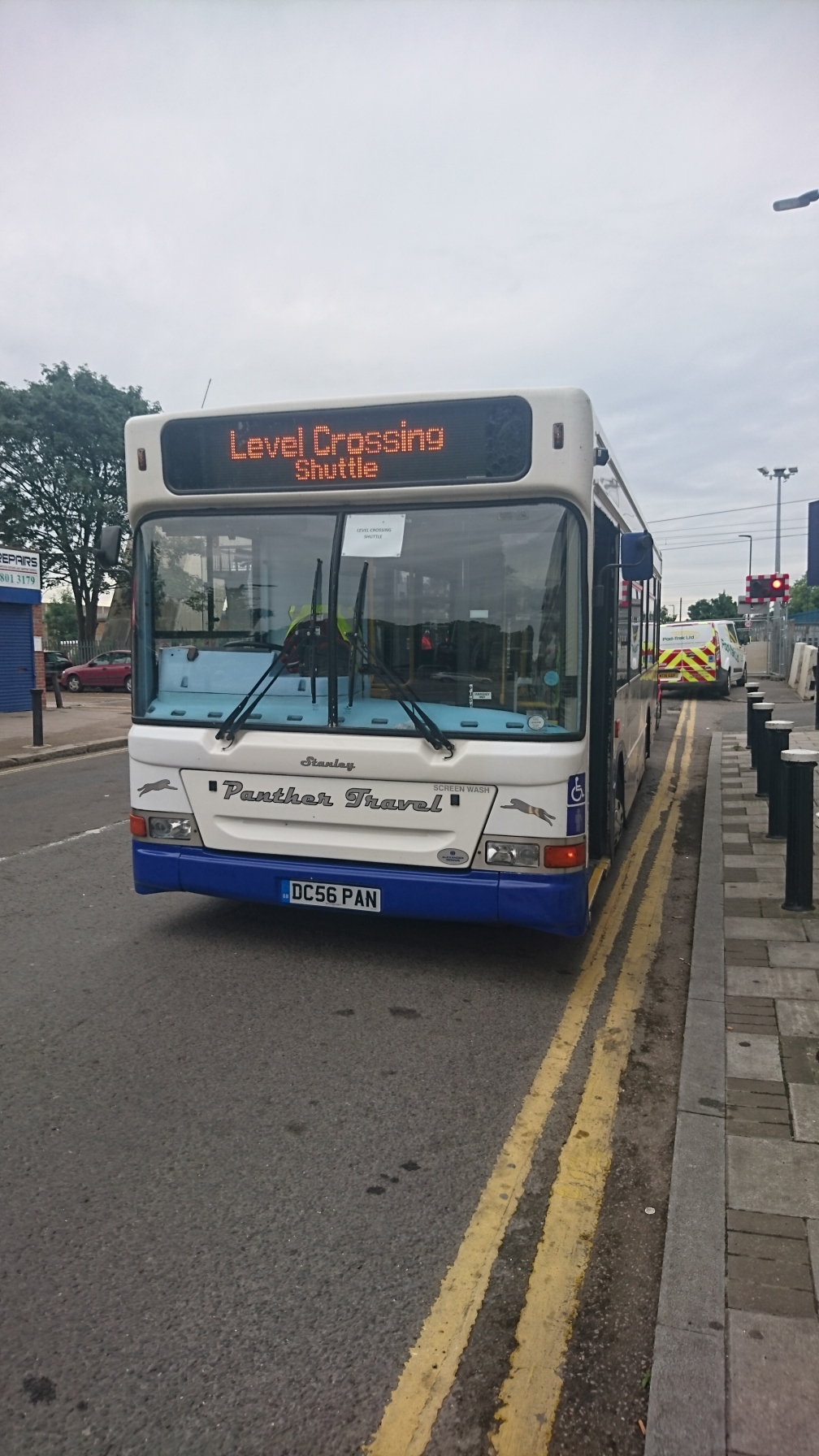 RAILWAY MISCELLANEOUS.
The former goods shed at Bury St Edmunds has been demolished. Since 1984, it had been used for leisure purposes; the ‘Rollerbury’ roller skating rink/roller disco, then a young people’s indoor activity centre and finally a health club. It it’s ‘Rollerbury’ days, a prefabricated extension was erected housing a nightclub, which was originally called ‘Reflex’ and later ‘Club Brasilia’. This was relatively short lived compared to the main building. 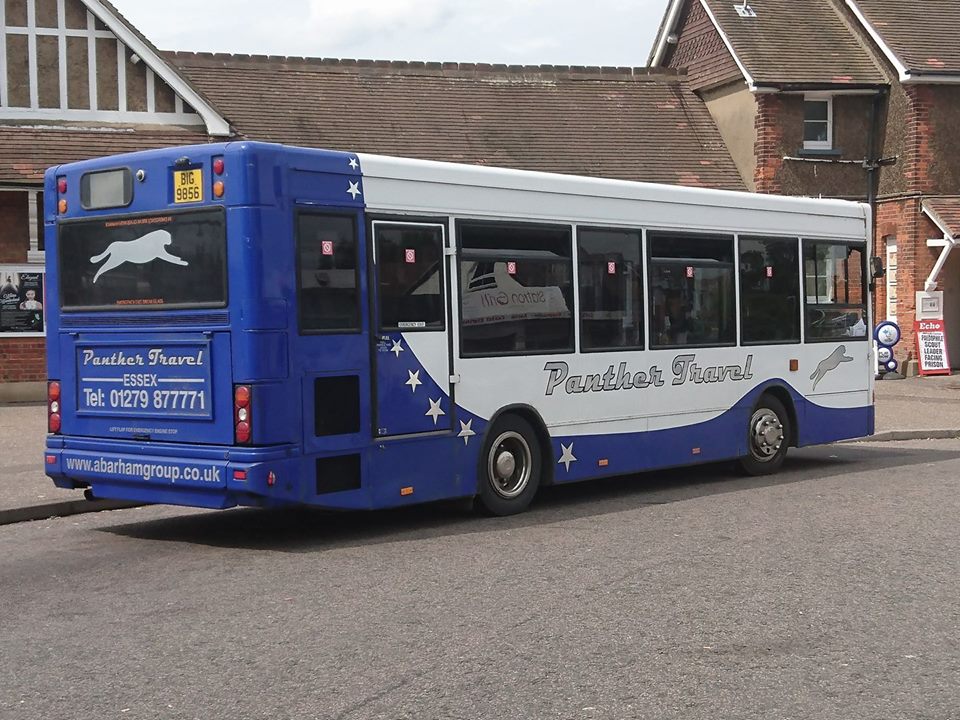 Above: Panther Mini Pointer Dennis Dart SLF BIG 9856 is on loan to Regal again. It was seen at Rayleigh Station on 4/7/17, on route 3 (Chelmsford-Southend). (Tim Webb).
Below: BIG 9856 at Sudbury Bus Station on the 11/12/13 group of services to Gosfield, on 24/7/17. (Simon Austin).
These two pictures illustrate the geographical extremes of Regal’s operations.

SCENIC TRAVEL, RETTENDON.
The plot formerly used by this long ceased operator is now used for car and van sales.

STANS, GREAT TOTHAM.
The Stanway School-St Michaels Estate contract (subbed from Hedingham) and the Thurstable School-Wickham Bishops contract – (subbed from Flagfinders) ceased after 21/7/17. Stan is to retain one contract for 2017/18 – for Great Totham Primary School.
Bova Futura VWH 836 has been offered for sale. It has reverted to its original R932 JYG registration.

STEPHENSONS.
Mb Sprinter 516/Mellor Strata accessible demonstrator DF66 AEC was on loan from Mellor at Rochford depot in mid July, and appeared on 61 (Southend-Fossetts Park). From 24/7/17, the 61 became off peak M-F and ceased to operate at weekends. This was due to the end of subsidy by the Fossetts Park developers. 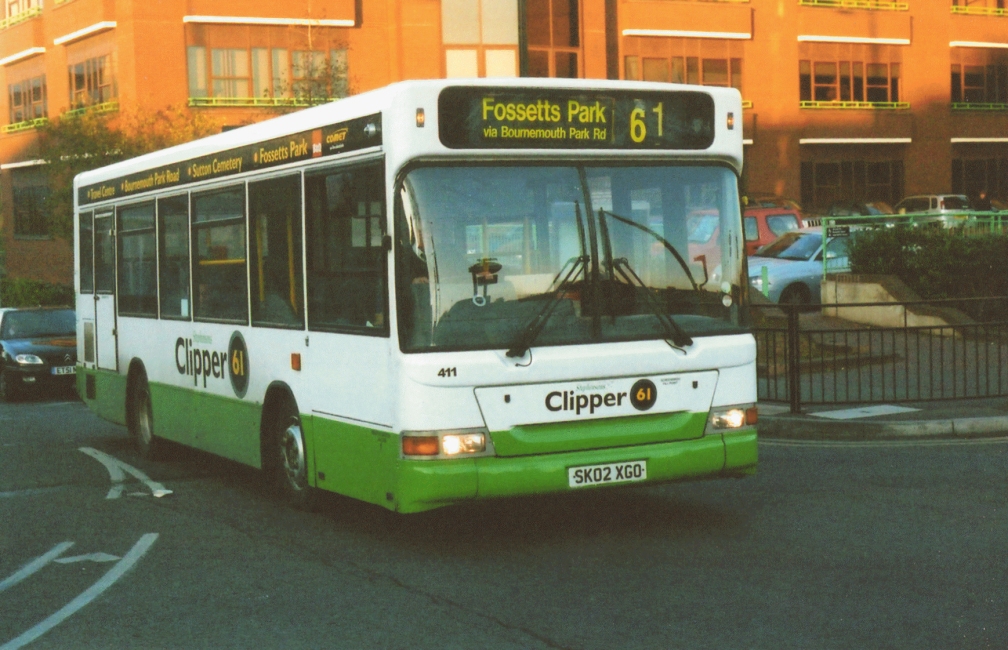 Above: Dennis Dart SLF/Plaxton Mini Pointer no 411 on the 61 in central Southend in June 2007 – not long after the service started. (John Podgorski).

TOWER TRANSIT.
From 1/7/17, TfL28 (Kensal Rise-Wandsworth), 31 (White City-Camden Town), 266 (Brent Cross-Hammersmith), 328 (Golders Green-Chelsea) moved from Atlas Road (AT) to Westbourne Park (X). This was to do with TfL contract changes, including the loss of TfL70 (Chiswick-South Kensington) to RATP London United – who has a depot virtually next door to Atlas Road.