Welcome to the August 2017 edition of Busmopolitan.
As per usual, the end of August saw the usual reshuffle of Essex County Council local bus contracts. Significant was the large reduction in work carried out by Regal, and also the complete withdrawal of some services, including 2 evening and one Sunday “trunk routes”. Some other (deep rural) routes have gone from conventional bus to community bus/flexible timetable.
There have additionally been some interesting Transport for London contract changes during this month.

ARRIVA KENT THAMESIDE (COLCHESTER).
OU16 BEY, BJO are Peugeot 208 5 door hatchback ferry cars. They have replaced the LDV Convoys.
Last TGM liveried bus, Dennis Dart SLF/Plaxton Pointer 3314 (S312 JUA) was collected from Southend, by Hardwick of Carlton, for scrap.
The former bus turning circle on Boxted Road, at the entrance to the old Severalls Hospital, has been severed, to provide an access road to a new housing development.
This had once been the northern terminus of Colchester Corporation/Colchester Borough Transport route 8 from Monkwick. A derelict bus shelter remained in mid August, but was soon dismantled. A peak hour Arriva 8B service had served Boxted Road until quite recently, but now the only bus is the 80/A provided by Panther Travel on Essex CC contract. The main service 8 these days, terminates at Highwoods.

ARROW TAXIS, MALDON.
New are Mb Sprinter/EVM low floor minibuses AV17 UVL/M.
They are for existing Dengie Link 99 and newly gained Essex CC routes 11,12,13 (Gosfield-Halstead-Sudbury), the latter from from Regal on re-tender. These are now part of the DART demand responsive network and renumbered to service 315.
Dengie Link D4 (Tillingham-Burnham) (except school journeys) has come from Stephensons and is also now a DART route.
Additionally won is ex Regal 31A (Chelmsford-Maldon) – M to F, but no longer Sats.

This travel app company, working with Transit Systems, has another “pop up” inner London bus route in the pipeline.
Proposed to run between Barnsbury and Shoreditch as a nightbus, it would utilise green coloured “big buses”. In fact Impact of Perivale ADL/Enviro 200s YX11 AEA/B/F/K/T plus one other are now green, and were seen at Transit’s Atlas Road depot on 2/8/17. AEK, AEA, AET have fleet nos CME1, CME2, CME3. The E200s came via DawsonRentals.

CENTREBUS (STEVENAGE).
This runs some of the former Harlow operations, which had been acquired from the old Trustybus.
Optare Solo 389 (Y39 HBT) is withdrawn.
VDL200/Centro 606 (FJ56 YBW) has returned from Grantham.
Ex Trustybus Dennis Dart SLF/Plaxton Pointers 542 (LN03 AYM), 544 (EU04 BZY) have moved from Luton to Grantham. 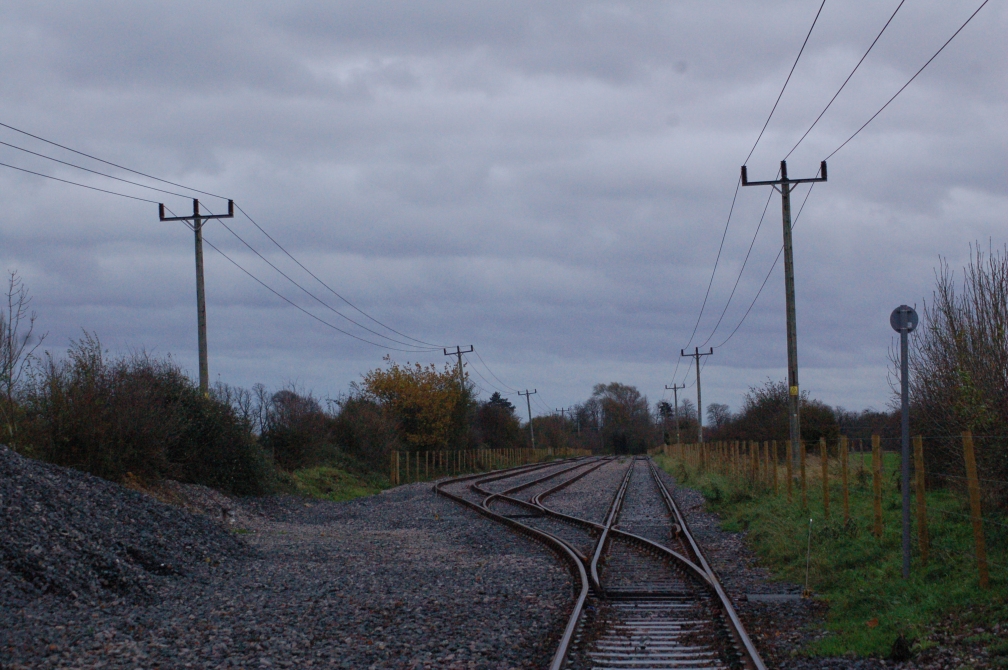 The remaining buildings of the old bus station (off Queen Street) were demolished during early August. These dated from 1961, when the previous bus station on St Johns Street had been replaced. Queen Street had closed completely in 2012 (having become a smaller “temporary” facility from 2006), but the buildings saw further uses- including a community cafe and a staff room for Arriva Colchester. The majority of the Queen Street site was redeveloped as the VAF arts gallery from 2006.

CROSS COUNTRY.
Stansted Airport to Ely shuttle 14-21/8/17, due to Freightliner derailment at Ely.

Above: Demonstrator liveried BCI Excellence no 150, on depot in August 2017. This appears on a variety of duties, when not on demonstration. (Chris Carmen). 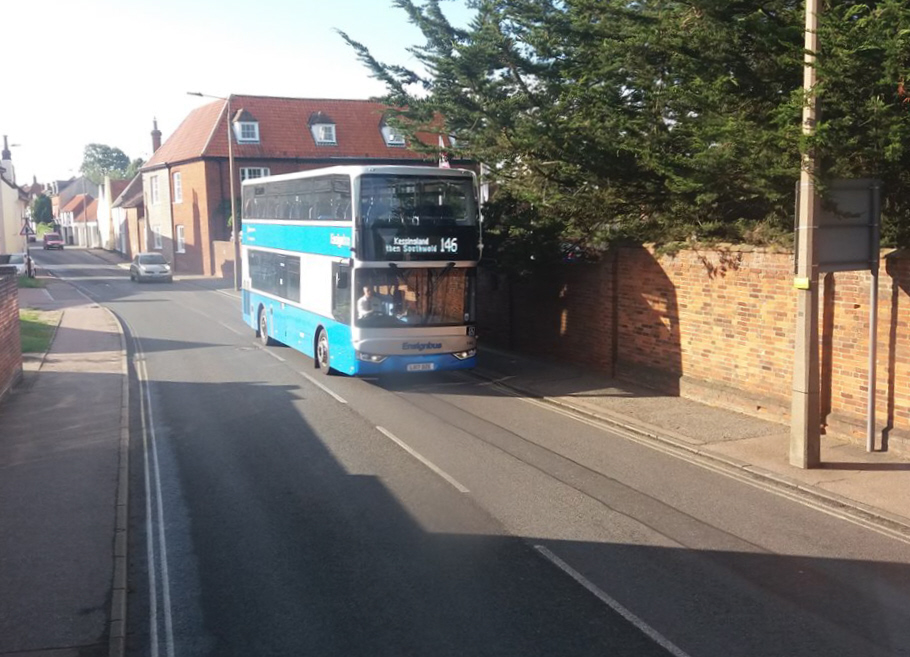 Above: Volvo B7TL/Alexander ALX400 30888 was previously with First Essex at Braintree. Now it’s with First Eastern Counties and in Lowestoft Corporation heritage livery. It was seen departing Lowestoft (Gordon Road) Bus Station on 5/8/17. The local municipal (by then called Waveney District Council Transport), sold out to Eastern Counties in 1977.
(Simon Austin).
Below: ADL/Enviro 200 44517 was new to First Essex at Harwich depot. It later passed to First Eastern Counties at Norwich, and was branded for Route 40. Now it is at Lowestoft, and was pictured heading out of the town centre on 5/8/17, on a local service. Note it retains its (now) debranded ‘Charcoal Line’ colours from Norwich. (Simon Austin). 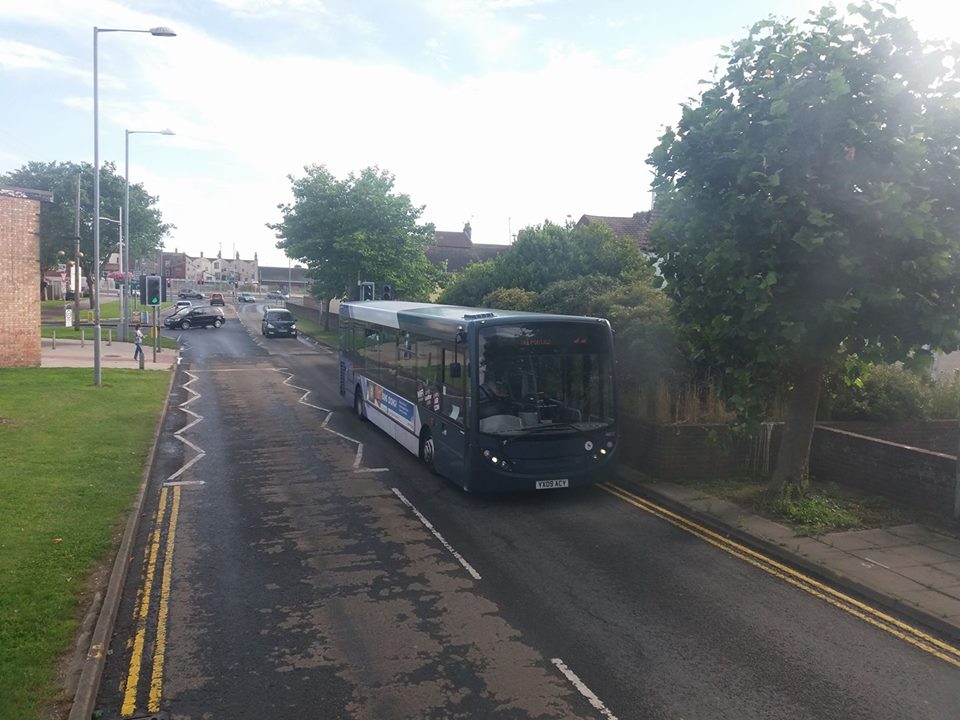 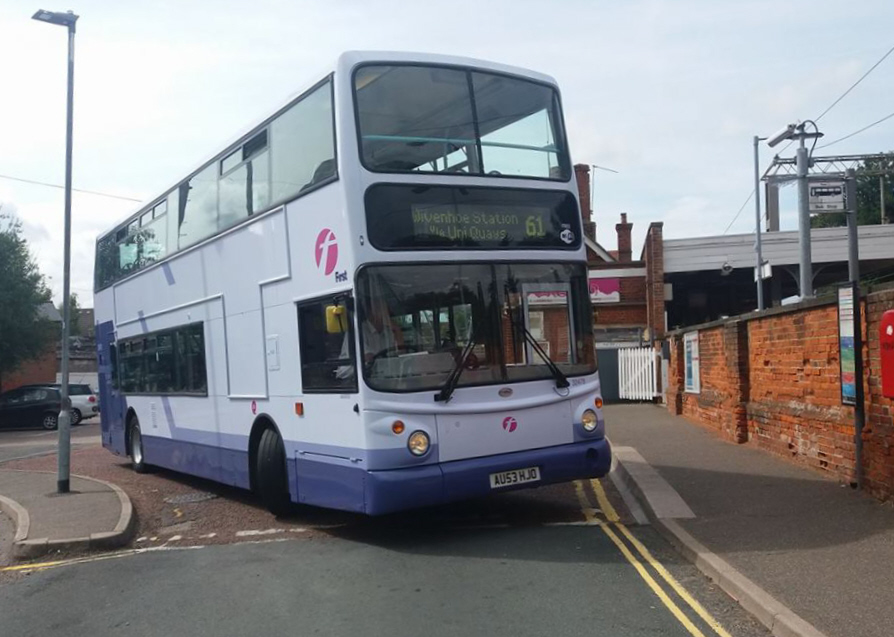 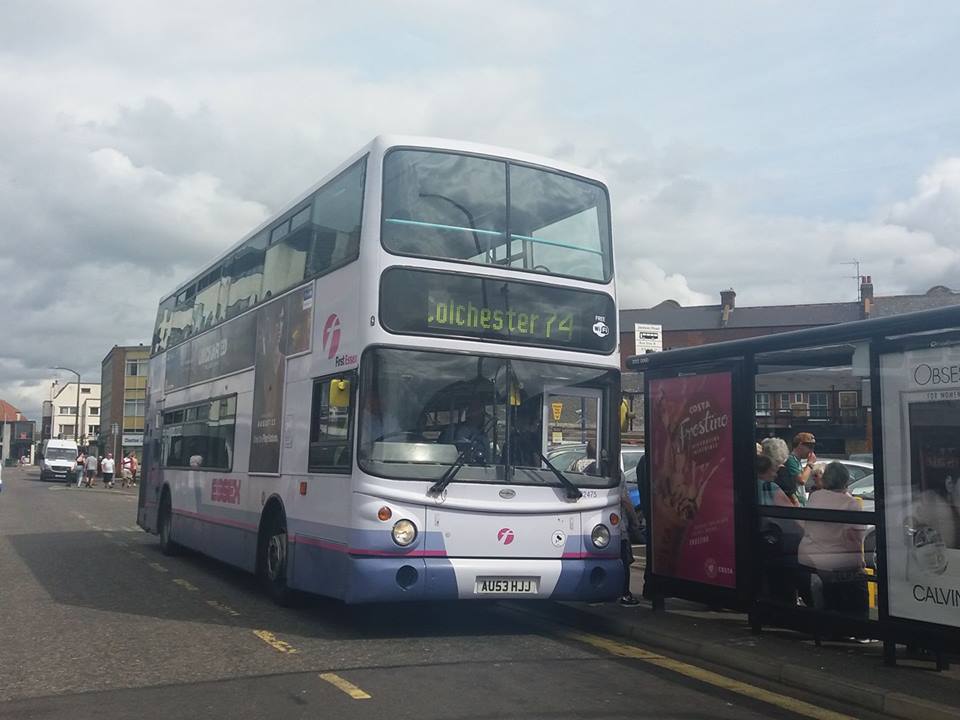 Withdrawn are Dennis Dart SLF/Plaxton Pointer crew ferry 43480 (R680 DPW), Dart SLF/Plaxton Mini Pointer 43802 (AO02 ODN) and Optare Solo crew ferry 53008 (W808 PAF).
Dart SLF 43480 and Optare Solo 53008 have gone to Alpha Recovery for scrap. They had latterly been a crew ferries at Chelmsford (CF) and were the last ex service buses used for this.
From 28/8/17, the following Essex CC contracts were gained:
32 (Chelmsford-Ongar) – M-Sat – from Stephensons.
46 (Chelmsford-Ongar) – M-Sat – from NIBS.
71C (Chelmsford-Colchester) – Suns/hols – from Regal. Worked by CF depot.
88A (Colchester-Halstead) – Suns/hols – from Regal. Was 88 with Regal.
565 (Brentwood-Bulphan) – M-Sat – from Regal.
Meanwhile, in Colchester – 66A (Old Heath-Colchester via Barnhall) ceased after 26/8/17. There are alternative facilities on the parallel 66, 66B. However, Abbots Road, Barnhall and Roberts Road are no longer served. This is the first time in living memory that Barnhall Estate has not had a bus service.
From 29/8/17, an additional commercial evening journey was added to 75,  the 1915  (Colchester-Maldon), to compensate for the loss of the Essex CC Regal contracted runs from that date.
The first 88A was worked by Volvo B7TL/Alexander ALX400 32068 (KP51 VZS), while the first day of 71C had Volvo B7RLE/Wright 66795 (MX05 CBU).

The old Queen Street depot at Colchester continues to find further uses. In mid August there was a ‘Street Photography’ exhibition there. 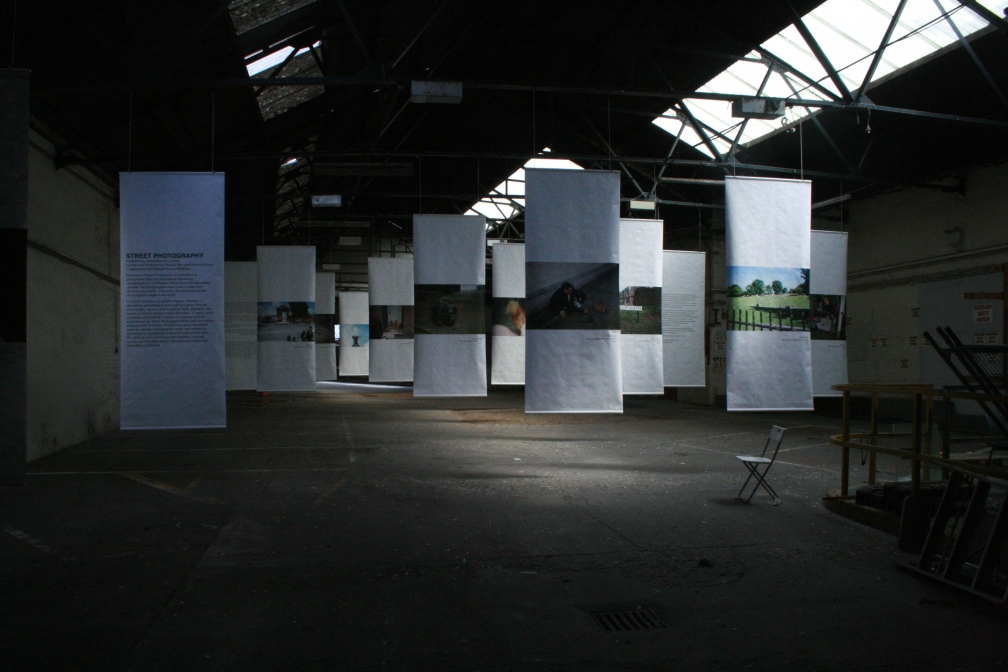 (John Podgorski).
Bova Futura GB54 FLG is in a revised white/blue livery – similar to that on the buses. It was pictured on GA rail replacement at Newbury Park, on 27/8/17.

FLYBE.
DHC-8 402 G-JECH is withdrawn. It has returned to its lessor World Wide Aircraft Ferrying as C-FWUC. 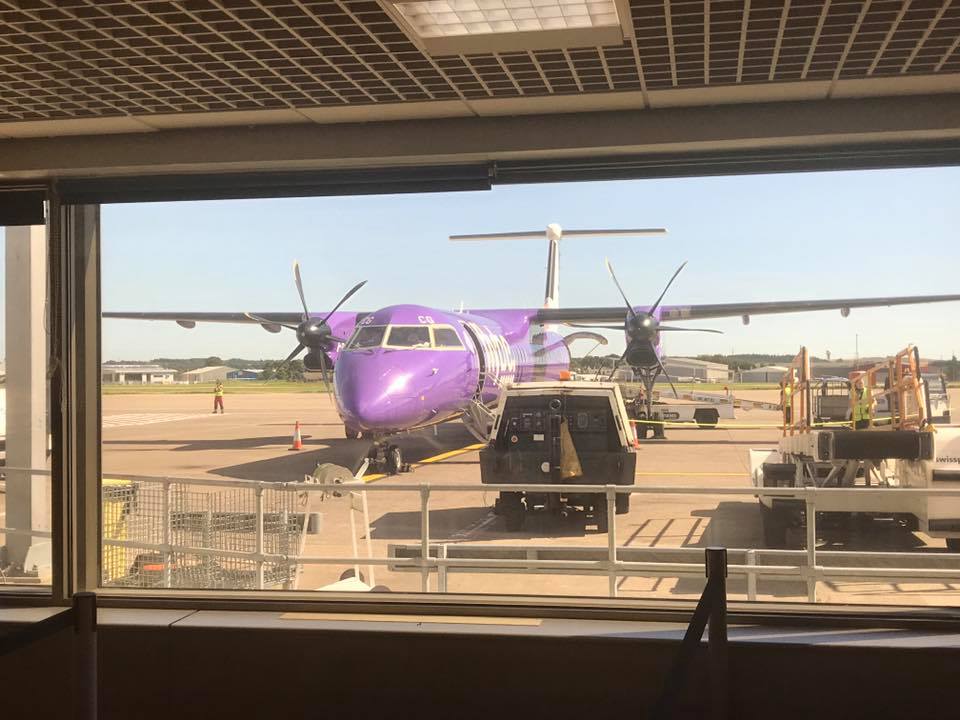 GALLOWAY, MENDLESHAM.
Suffolk CC route 387 (Stowmarket-Stowupland) was withdrawn without replacement at the end of August. 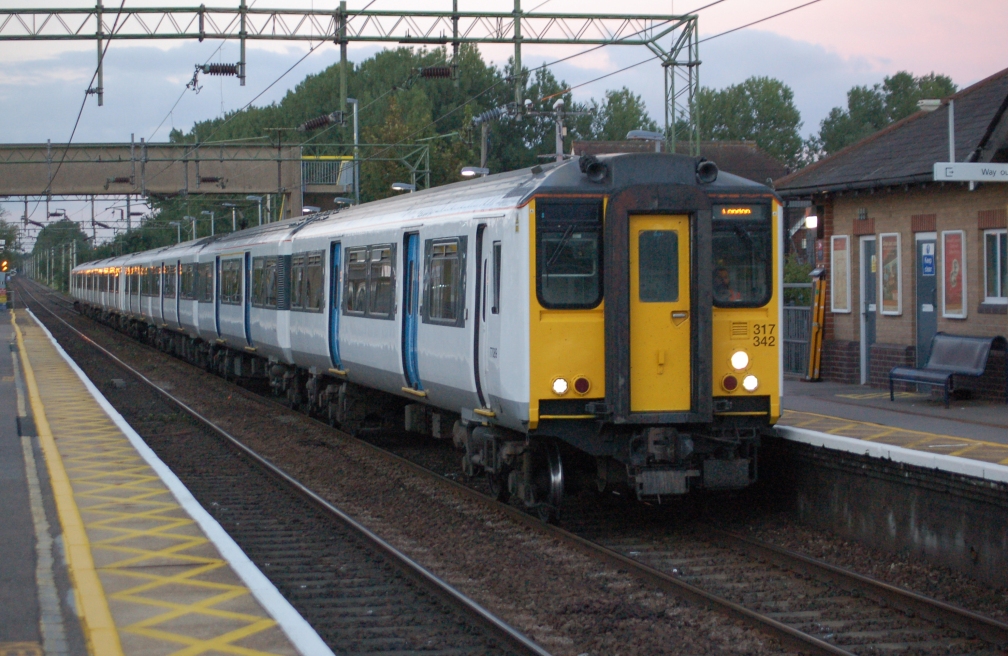 Above: ‘Tornado’ arrives at Frinton on Sea from Walton on the Naze on 12/8/17. DBS diesel 66020 was hauling this train, with the ‘A1’ on the rear. This ‘top and tail’ consist shuttled between Colchester and the coast all day, before reversal at Colchester Town meant ‘Tornado’ could lead back to London in the late evening. (Simon Austin).
Below: ‘Tornado’ in full flight at Hythe, Colchester. (John Podgorski). 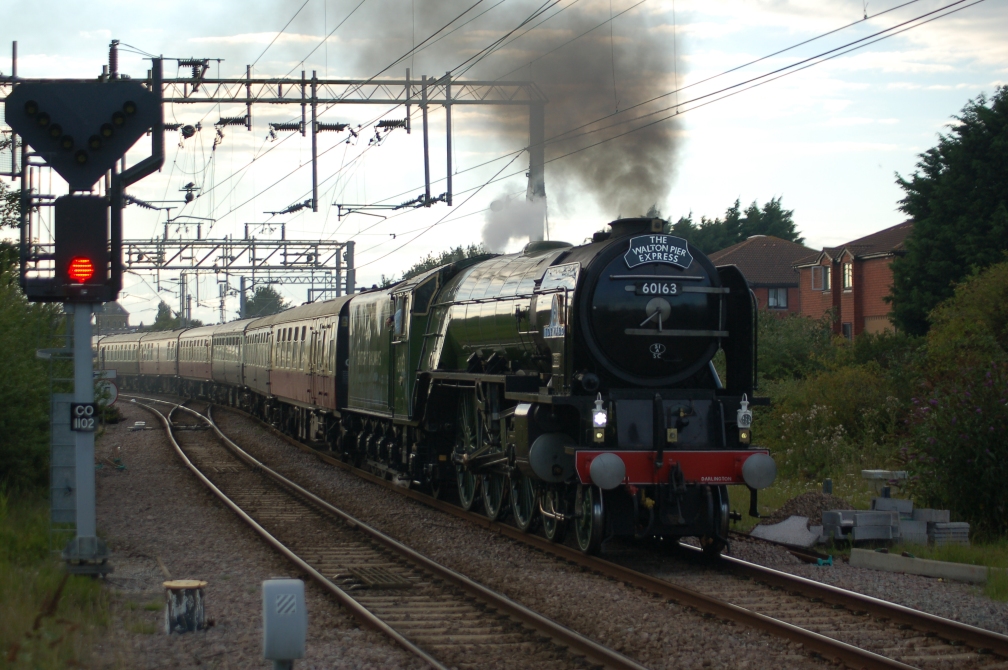 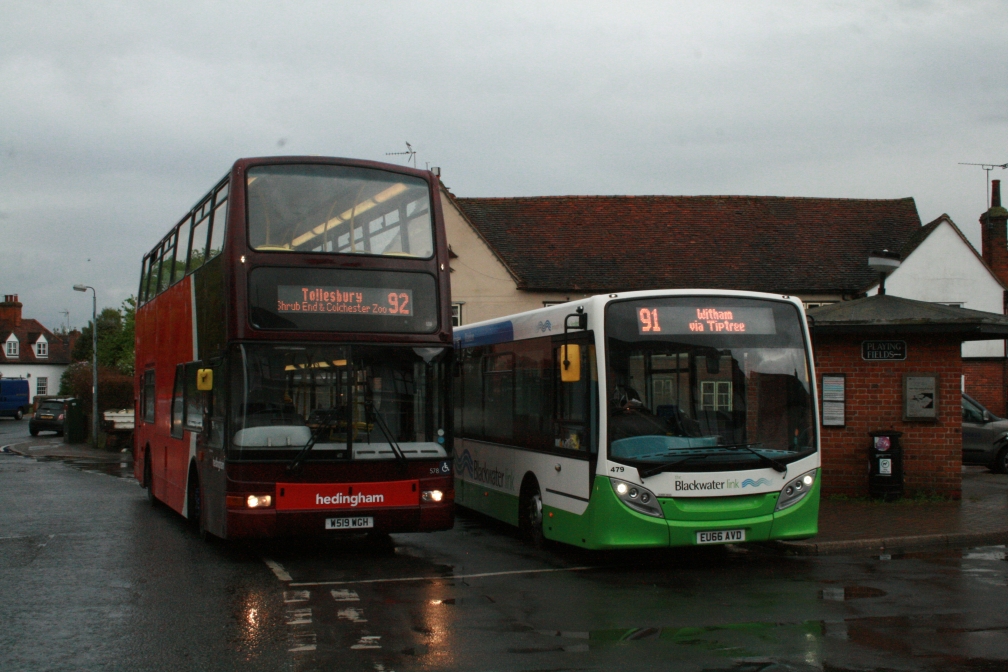 D1 (Maldon-Bradwell on Sea), D2 (Maldon-Southminster) have been gained from Stephensons, along with Stephenson’s remaining workings on 91 (Witham-Tollesbury) and 95 (Maldon-Tollesbury). The picture at Tollesbury Square on 24/4/17 (above), shows Hedingham Volvo B7TL/Plaxton President 578 having just arrived on the day’s last 92 from Colchester with Stephensons ADL/Enviro 200 no 479 awaiting departure for Witham. D1 on Saturdays is subbed to Arrow Taxis initially. Saturday 92s are now worked from Kelvedon (KN) rather than Clacton (CN).
345 (Fuller Street-Witham) and the one weekday plus all Saturday journeys on 95 (Tollesbury-Maldon) have come from Regal. Short ADL/E200 292 (EU59 AFF) worked the first Hedingham 345 journey on 30/8/17.

IPSWICH BUSES.
The last leyland Atlantean, open top Roe bodied 9 (MRT 9P) was withdrawn at the end of August, for further use as a non pcv tree lopper.

Above: MAN14/EL Millenyum FY52 PMU is now with Semmence of Wymondham. It was pictured at Castle Meadow, Norwich on 7/8/17. (Roger Pope). 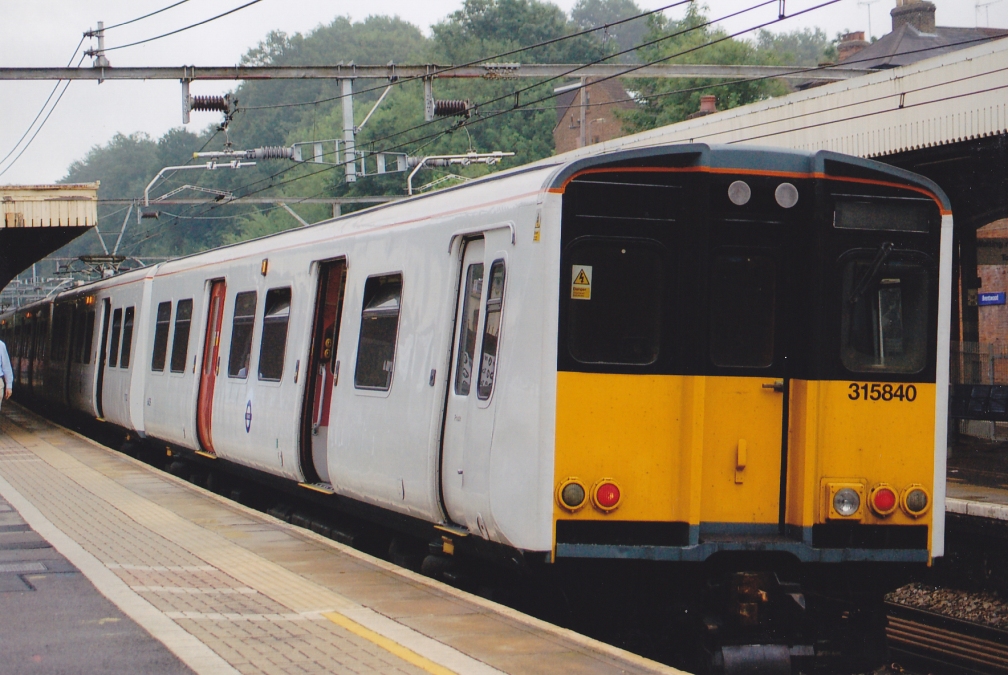 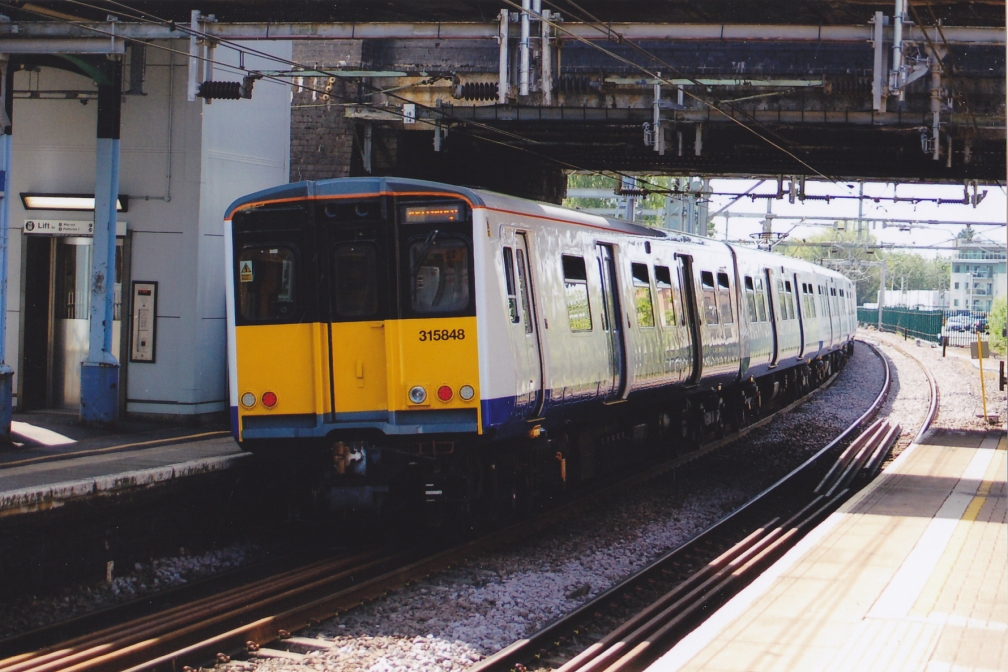 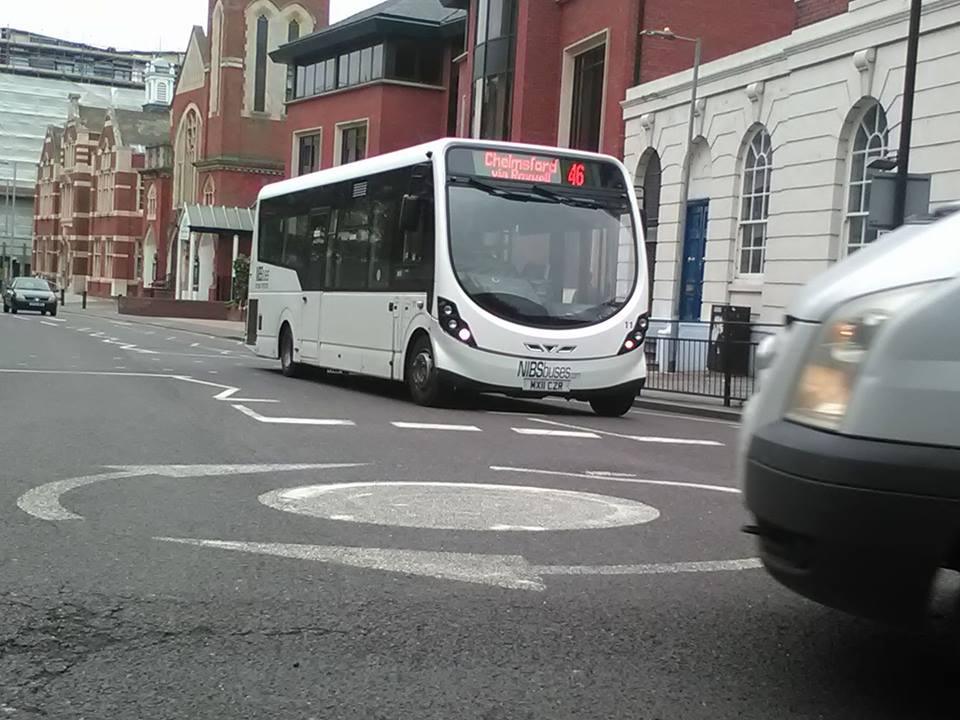 Above: Wright Streetlite no 11 turns from Victoria Road South into Duke Street, Chelmsford, on a 46 journey on 8/5/17. (Dale Bell).

Service 269 has been revised to run Grays-Brentwood and no longer continues to Blackmore. 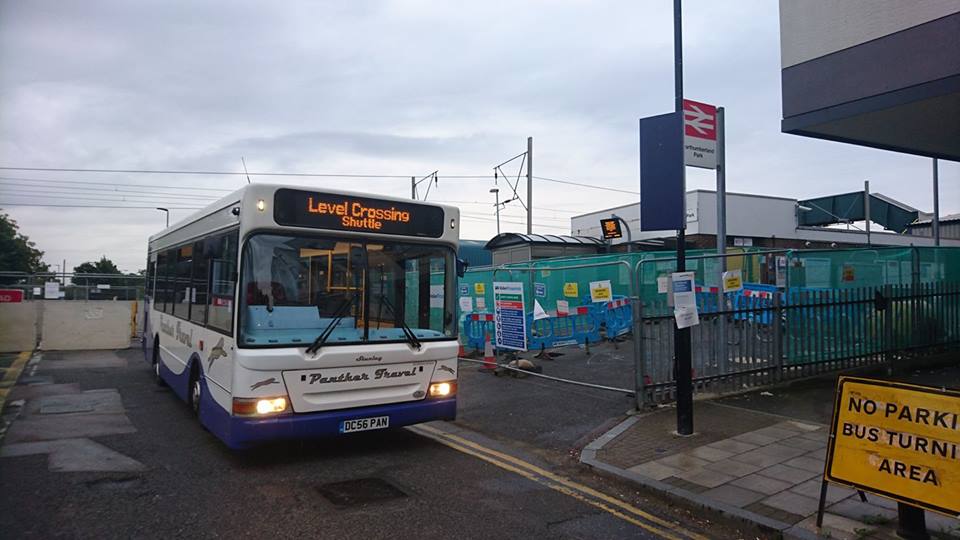 Above: Work on the upgrade at Greater Anglia Northumberland Park railway station is progressing. In this view, taken on 20/8/17, the former level crossing can be seen cordoned off on the left, while the station complex is to the right. Dennis Dart SLF/Plaxton Pointer DC56 PAN awaits its next shuttle to the other side of the station. (Alex Hazell). 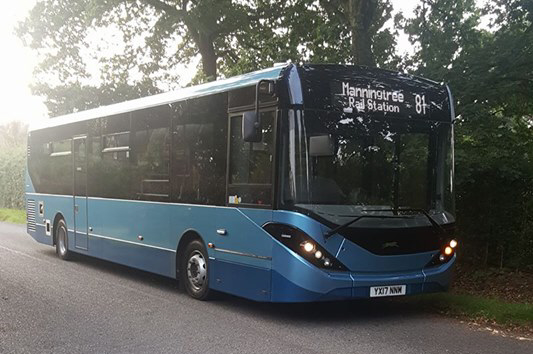 ADL/Enviro 200 MMC demonstrator YX17 NNM arrived on 23rd August. It entered traffic the following day on the 80/81 group of routes, and was pictured (above) at Dedham.
It left on 31st August.

Above: Panther Dennis Dart SLF/Plaxton Pointer DC02 PAN at Dedham terminus on 7/8/17. It had arrived as an 81A from Colchester via Langham and departed as an 80A. (John Podgorski, with thanks to Alex Hazell). 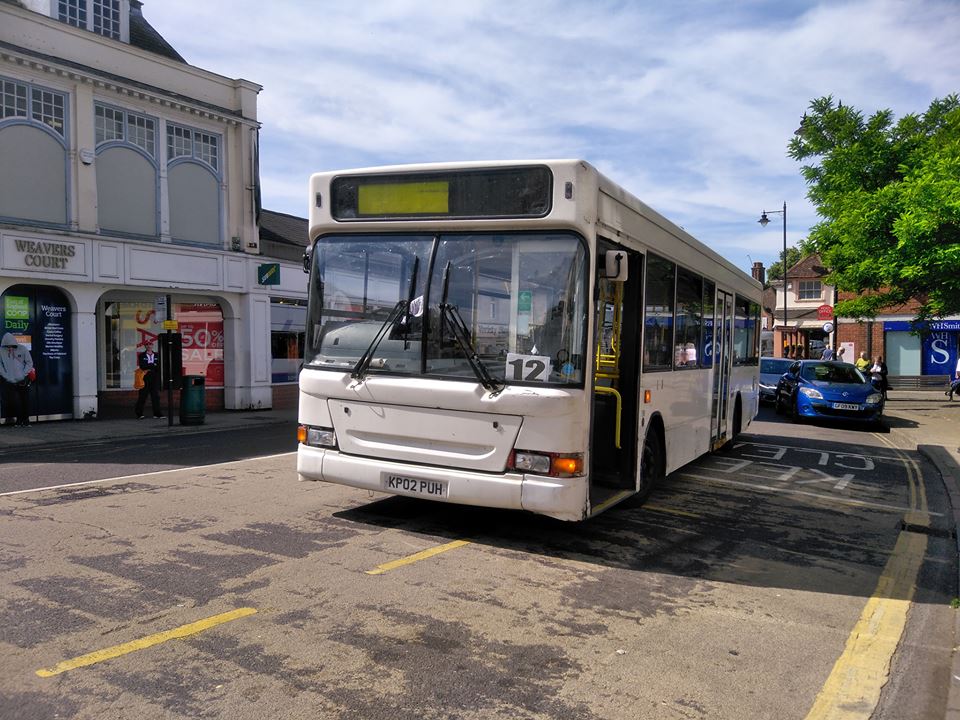 Above: Regal Dennis Dart SLF/Plaxton Pointer KP02 PUH on a Sudbury bound 12 in Halstead on 23/6/17; covering for a defective Optare Solo. (Simon Austin). 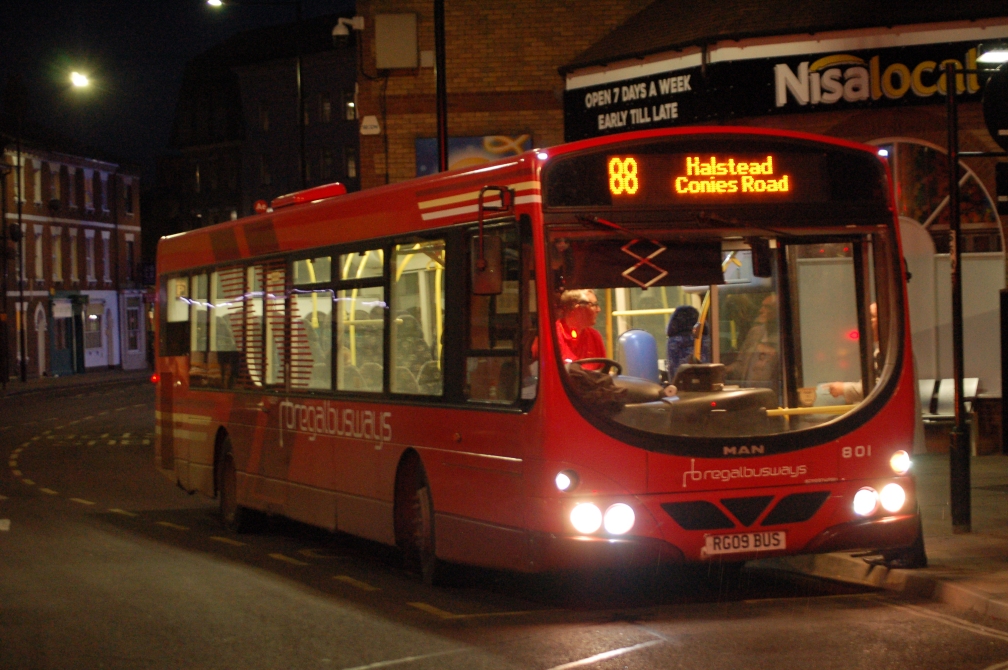 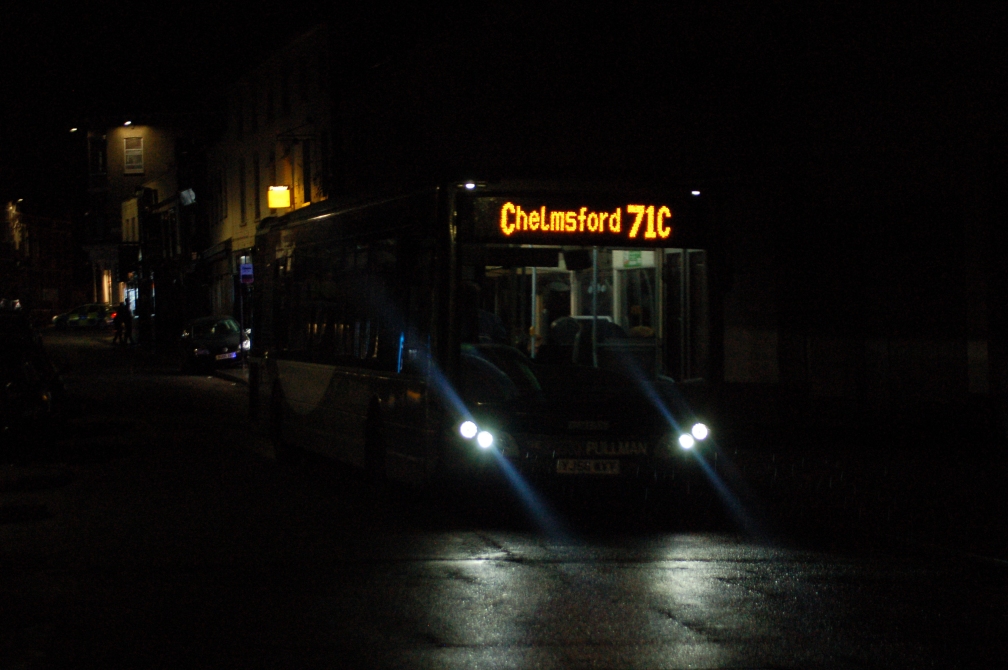 Long disused Optare Solo 204 (YJ58 CDE) has gone for scrap, having been heavily cannibalised. It retained the old maroon/cream livery. 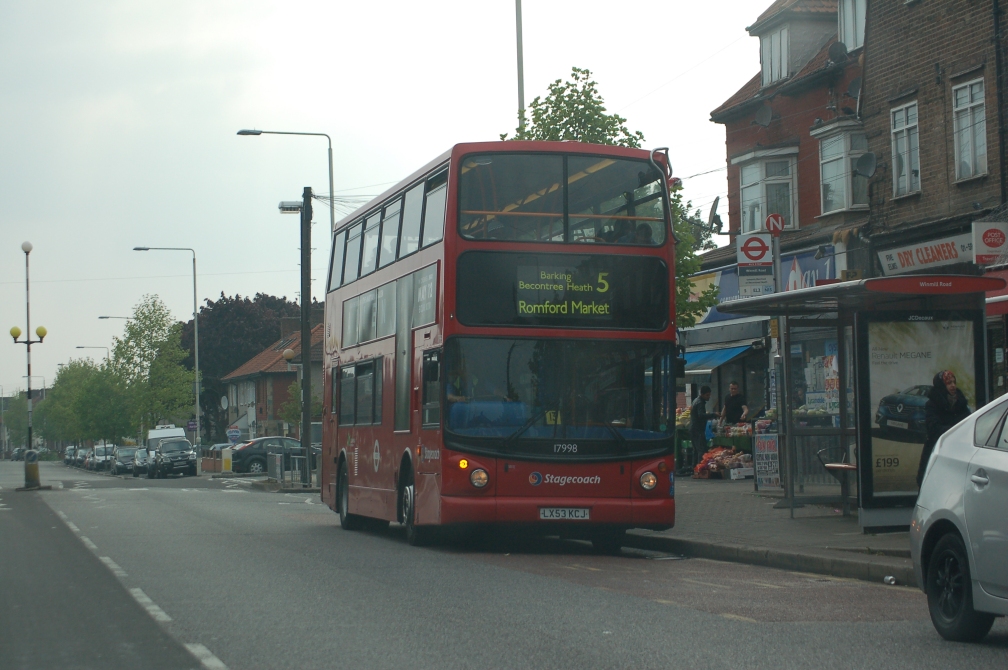 On 27-28/8/17, for the Notting Hill Carnival, a limited stop 205X route was operated between Whitechapel and Paddington.

STEPHENSONS.
From 7/8/17, commercial Sunday service 6 (Southend-Southchurch) ceased.
From 27/8/17:
Gained from NIBS – 12 (Billericay-Wickford).
ECC 7 and 8 (Rayleigh-Shoebury) – M to Sat evenings – to Arriva; 32 (Chelmsford-Ongar) lost to First Essex. 71/72 (Stondon Massey-Warley) went to Regal Busways. D1 (Maldon-Bradwell on Sea) and D2 (Maldon-Southminster) passed to Hedingham, with D4 (Tillingham-Burnham) (schools) retained as service 104 but the rest of D4 to Arrow. D6 (Southminster-Althorne) is withdrawn. The Saturdays only Clavering section of 59/60 (Audley End-Haverhill) withdrawn.
As a result of the above changes, there have been reallocations of some duties between Boreham and Braintree, affecting routes Boreham now runs 9/A, 16 ond one duty on 38A while Braintree now has 21, 30 and 38/A. The outstation at Fourways Coaches, Highwood has also ceased. This ran 71/72. Additionally, all Optare Solos are now concentrated at Haverhill depot. 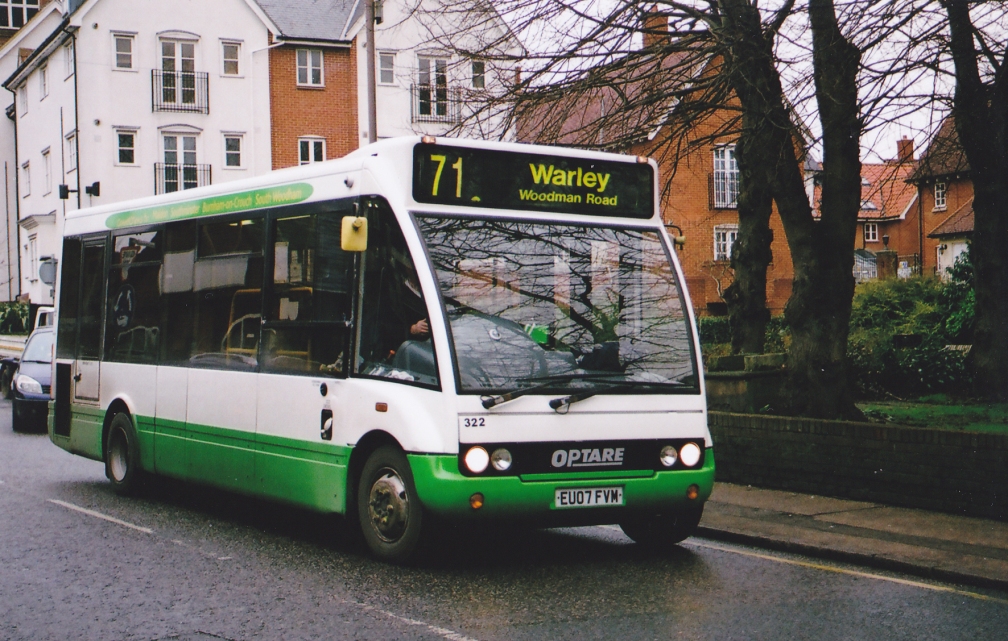 SWISS.
Another Avor RJ100 withdrawn is HB-IYZ. It has gone to Prestwick, Scotland for storage.

TOWER TRANSIT.
New are Van Hool A330FC electric buses BH63101/2 (LJ67 HTF/G). They have initially been put into store at Lea Interchange (LI).
Atlas Road (AT) site has been vacated, with its residual functions moved to Westbourne Park (X). The premises are For Sale/To Let. 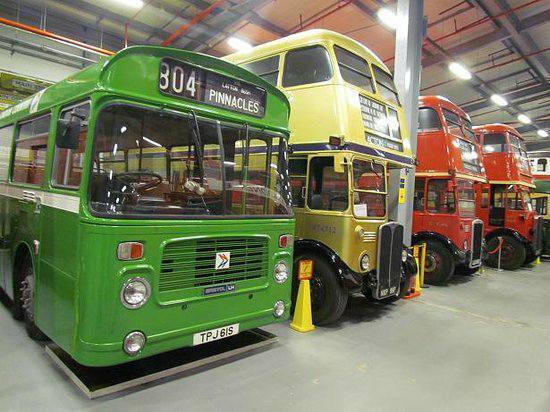 Above: An earlier generation of bus that served The Pinnacles. London Country Bristol LH/ECW BN61, now preserved at part of London’s Transport Museum Collection and seen at Acton depot on 23/4/17.  It is in the company of RT, RTW and STL London buses.(‘Bradley the Bus’). 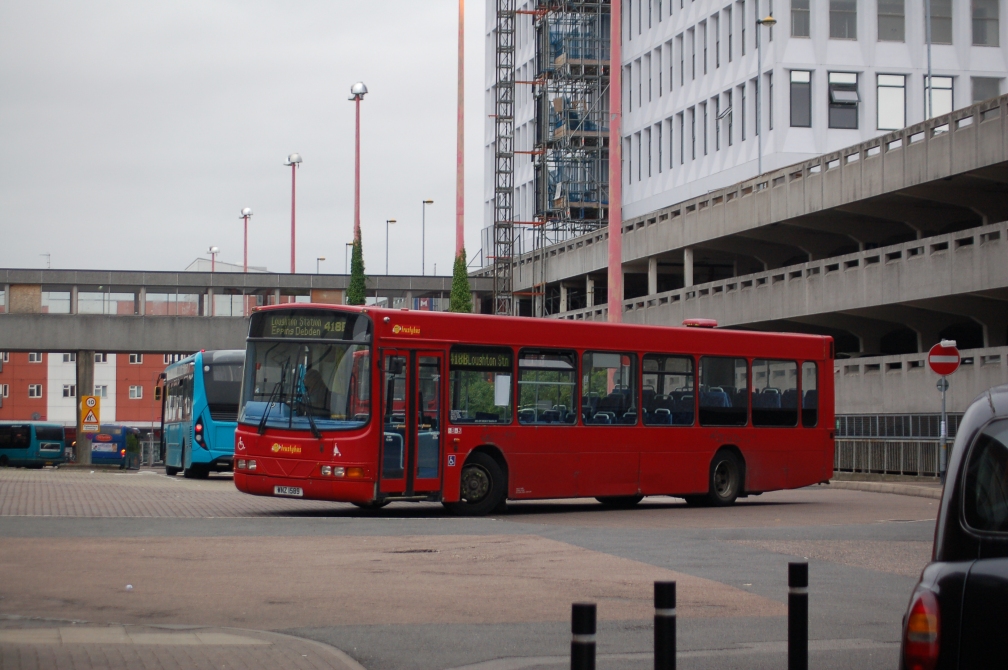 Further Scania Omnicities acquired through Ensign, are YN04 GMG, GNU, YN05 WKC.
ADL/Enviro 300 EDL35 (LY58 PFX) remains stored, having been withdrawn in 2016 due to electrical failure. Volvo B7RLE/Wright Eclipse YK53 GXJ is delicensed due to engine failure. It is intended to repair both.