Welcome to the September 2019 edition of Busmopolitan.

This time of the year sees the new vehicle registration number; 69 in this case. The first buses to bear this are with TfL contractors.
And it’s the start of the new school year, which means changes to some contracts.
Double deckers have returned to Arriva Colchester, after some three years.

On the rails, the first stock to depart Greater Anglia as a result of the new Stadler ‘Flirt’ are the Class 170 Turbostar DMUs. They will all go to Transport for Wales.
Two well known names ceased trading in September. Wrightbus, the manufacturer of the “Borismaster”, StreetLite buses and the Gemini and Solar bus bodies; plus (in the air), the iconic travel agent Thomas Cook, who had a significant presence at Stansted.

This year marks 80 years since RT1 first entered service and 40 years since the withdrawal of the RT and RF types from service with London Transport (LT). With these two significant anniversaries this year, an event which may never be repeated anywhere again because of the age of the buses was organised and very well attended.
The day started early with lots of activity getting the buses ready and into position to travel to North Weald Station. It was great to see so many lovely old buses and so many enthusiastic bus crews.
We had over 30 buses in attendance at North Weald Station and several stals selling books, model buses, bus photos and other bus related items.
There were bus rides around the local area to Chingford, High Beach, Loughton, Theydon Bois and Waltham Abbey. There was also a special bus service to Lodge’s Coaches depot at High Easter for their Bus and Car show. Lodge’s has a fleet of preserved coaches. The regular 339 and 381 services were also operated with RT and RF vehicles.
I was lucky enough to drive Leyland RTL1076 in service to Waltham Abbey.
I parked up when we arrived at Waltham Abbey to allow for photos to be taken of RTL1076 with the Abbey Church in the background. I also drove RF401.

Of the many buses attending today was RT1 which entered service in 1939, the first of nearly 7000 RT buses that London Transport operated. RT1 has been beautifully restored by the London Bus Museum in Surrey, where it is kept. RT8 and RT113, biult in 1940 were also in attendance, all in lovely condition and still running around as if they were new. You wouldn’t have thought they were all in their 8th decade. There were also many post war built RT and RF buses in attendance.
Production of the RT stopped during the War and resumed afterwards. Most London Transport RT buses were built by AEC, but there were also some built by Leyland. Today, there were examples of AEC and Leyland RT buses as well as RF buses, of which RF136 was “the star of the show”.
“Star of the show” RF136 entered Green Line service in 1952. The RF buses were so reliable that by the mid 1960’s LT decided to refurbish them rather than replace them. By 1966 RT136 had been refurbished to give it a more “modern” look, but what made RT136 a one off was that it was the only RF to have the pale pearlescent grey with a broad green stripe bearing the Green Line fleet name livery that you see it in today. The rest of the Green Line RF fleet was painted in the same green livery which RF180 wears today. Until today, only one colour photo taken in 1966 existed of RF136. We can now see RF136 in its full glory beautifully restored.
Towards the end of the day a road run took place from North Weald Station to the airfield where a cavalcade of RT and RF buses did several circuits so that people could ride on them and some people were at the roadside taking photos. We then all drove to Harlow Garden Centre and parked up for one last display of these wonderful buses. A fantastic day was had by all, visitors and bus crews alike.
Many thanks to everyone who worked so hard to make this another very successful Epping Ongar Bus Rally and to all the bus owners for bringing their wonderful buses to the rally.
The next bus rally is Sunday 23rd February 2020, celebrating the 50th anniversary of the formation of London Country Buses. Don’t miss it ! 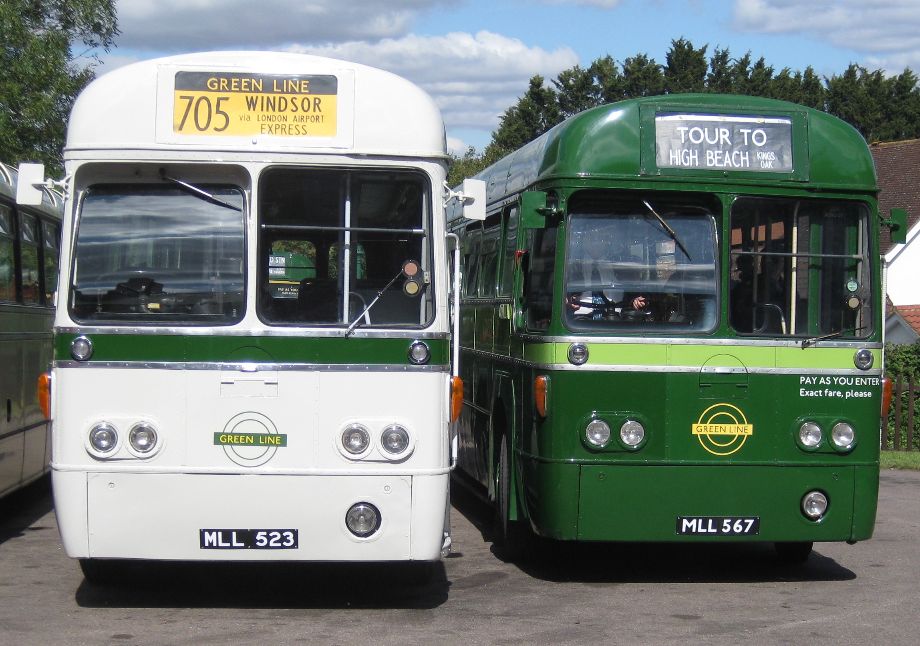 A and U TRANSPORTS, ILFORD. 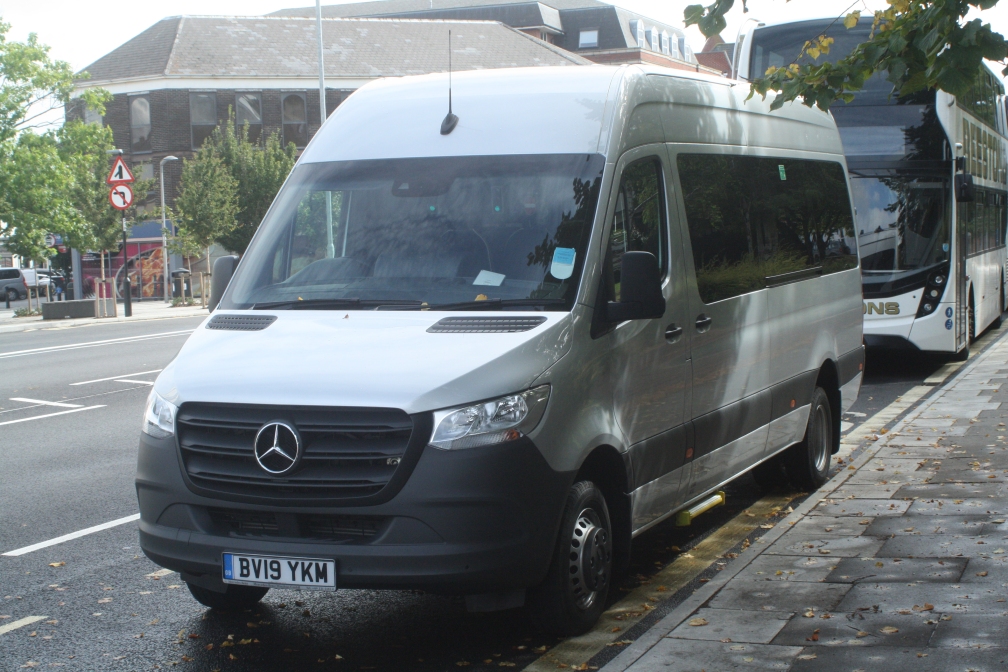 Above: Has the contract for Colchester High School, previously held by AJK Travel of Ilford. Mb Sprinter Transfer 18 seater BV19 YKM is used. Pictured at Colchester on 4/9/19. (John Podgorski). 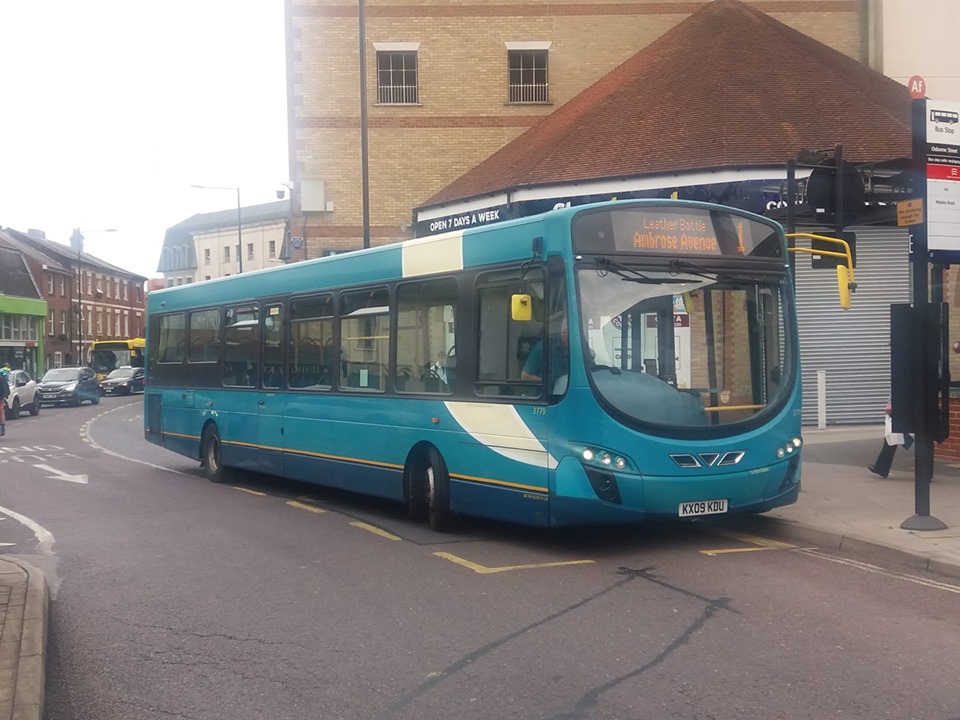 BEESTONS.
Some Cornard Upper School runs have been gained from Chambers.
The Ipswich-Colchester Schools have been lost to Ipswich Buses and Panther Travel.

DRAGOMAN, DEBENHAM.
This operator provides overseas “adventure exploration” tours.
Mercedes Axor 1824 WN60 AYG is a lorry chassis cab with an in house bus body fitted. It is named ‘Amelia’ and is for use in Africa. 329 AFK 93 is a French registered left hand drive Mercedes lorry chassis cab. It has been converted to a bus and is named ‘Eva’. It is for use in South America. 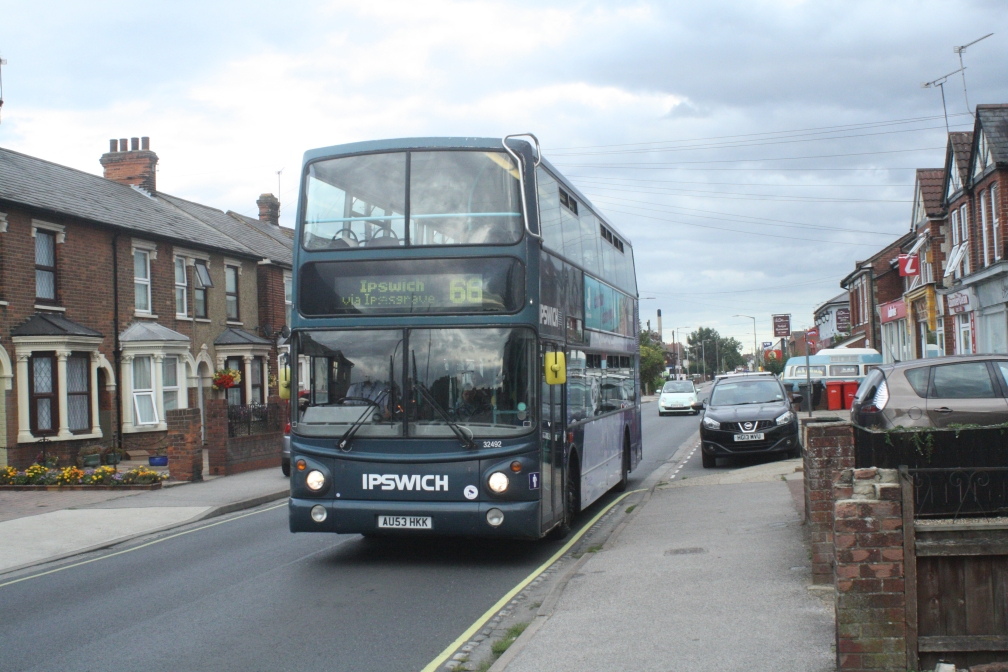 FELIX, LONG MELFORD.
Acquired from a preservationist, for heritage use, is 1950 vintage Bedford OB/Duople LJO 757. 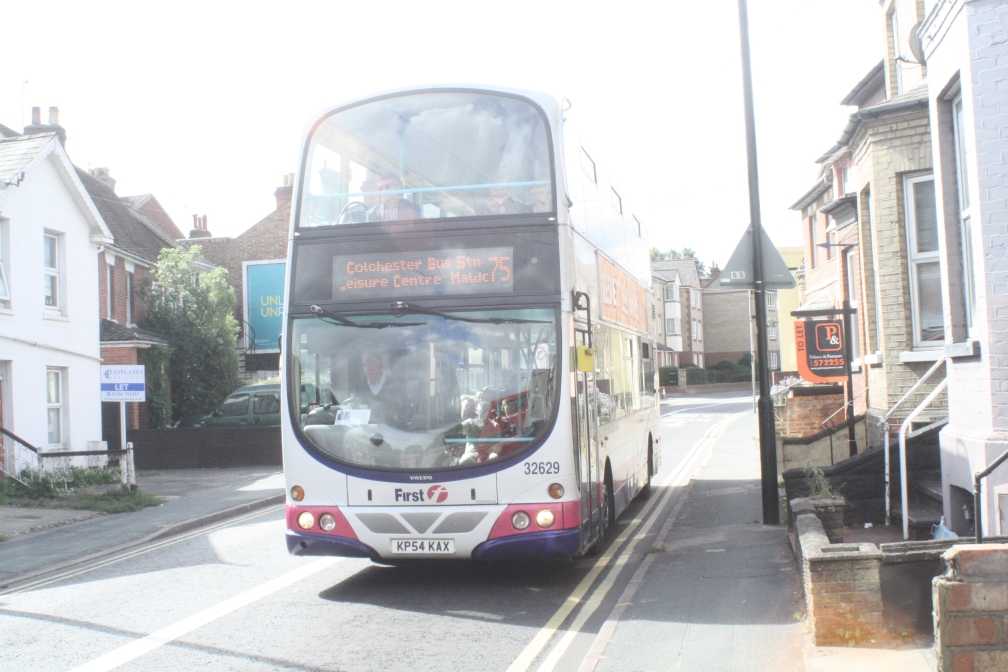 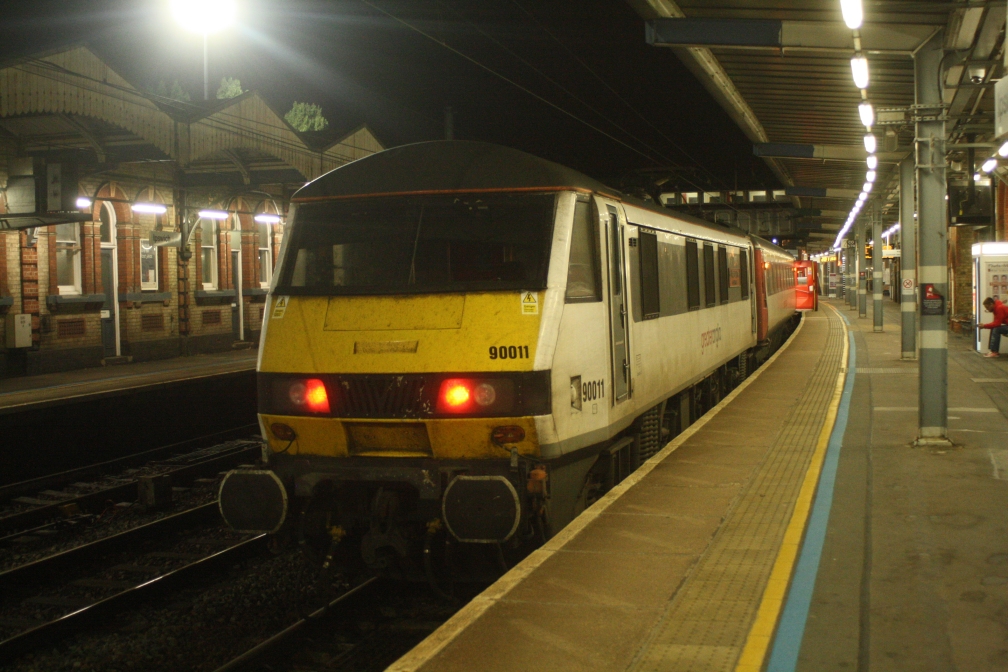 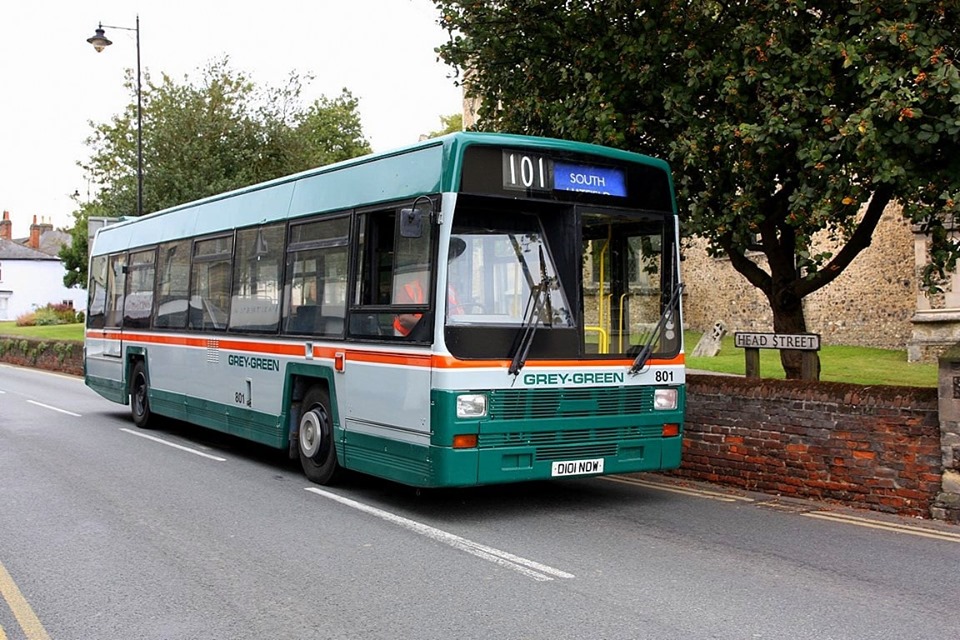 HEDINGHAM.
Volvo B7TL/Plaxton President 561 (V301 LGC) has been saved for preservation.
575 (W516 WGH) has been repaired and now has a new style wheelchair ramp – with string pull. 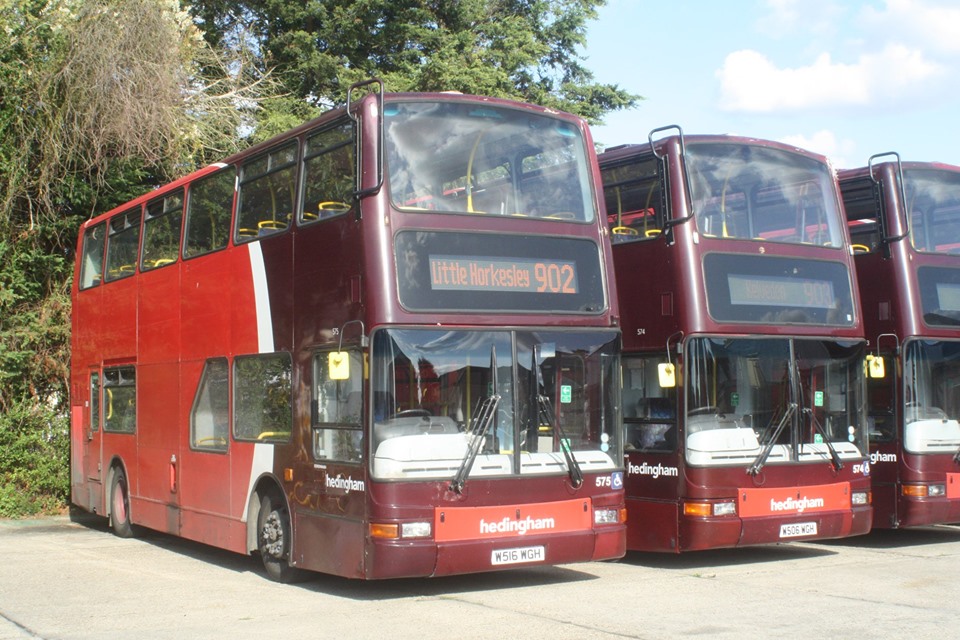 LONDON GENERAL NORTH.
The seasonal Southend seafront service 68 will not be run in 2020.
The old pump house at Northumberland Park depot has been demolished to provide extra parking/charging space for forthcoming new electric buses.

LONDON OVERGROUND.
New Aventra 710510 has been on test. 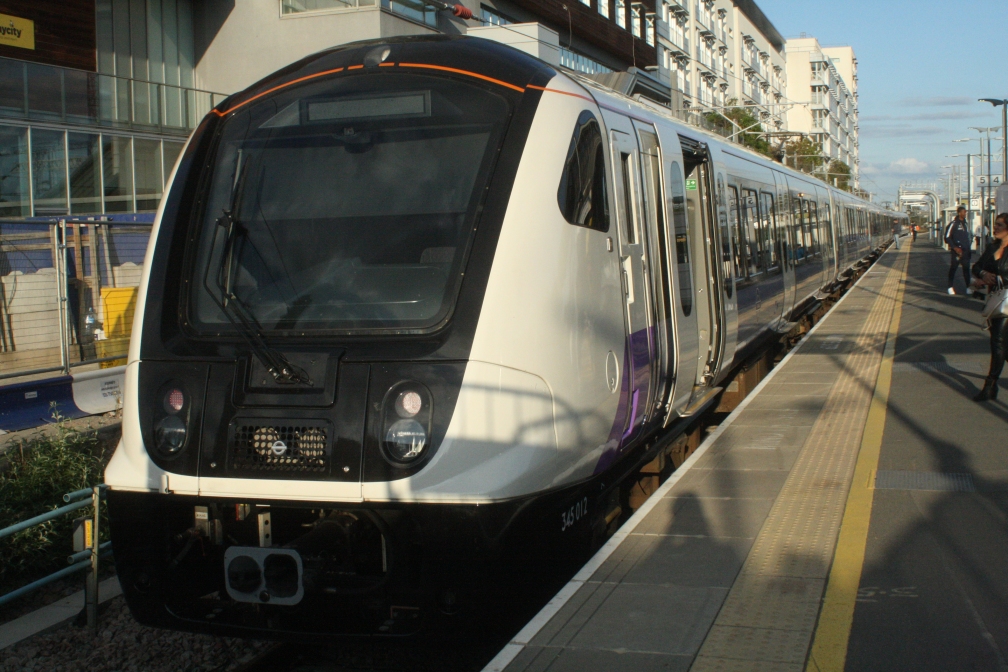 Above: Not all it appears. Volvo B11RT/Caetano Levante BV66 WRC is actually a training vehicle, based at Start Hill. Seen at Marks Tey (at the route 250 coach stop) on 9/9/19. (John Podgorski). 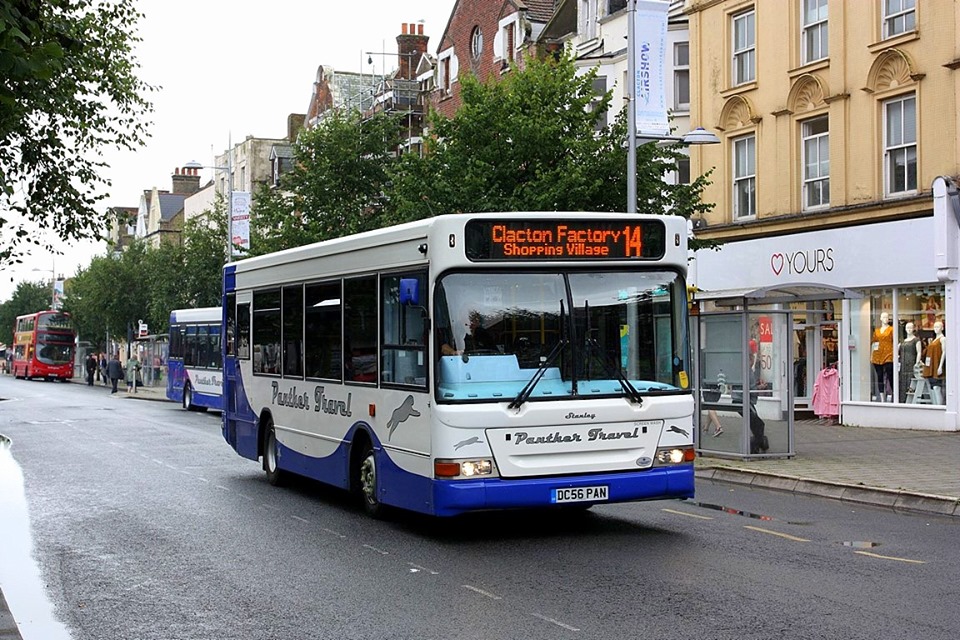 Commercial service 14 (Harwich-Clacton/Clacton-Clacton Common), was deregistered from 1/9/19 – the last operational day was 31/8/19. However, 6 new school contracts have been gained, to compensate. These are Ipswich School to Colchester – ex Beestons and Harlequin, Manningtree School – ex Hedingham and Ward’s. The Colchester outstation VA has been increased to 6 as a result.
The duplicates for Airport Bus Express have ceased. Great Dunmow outstation (at Don’s Coaches) is still available, but is no longer regularly used for parking.

RYANAIR.
There was further industrial action by pilots in early September. 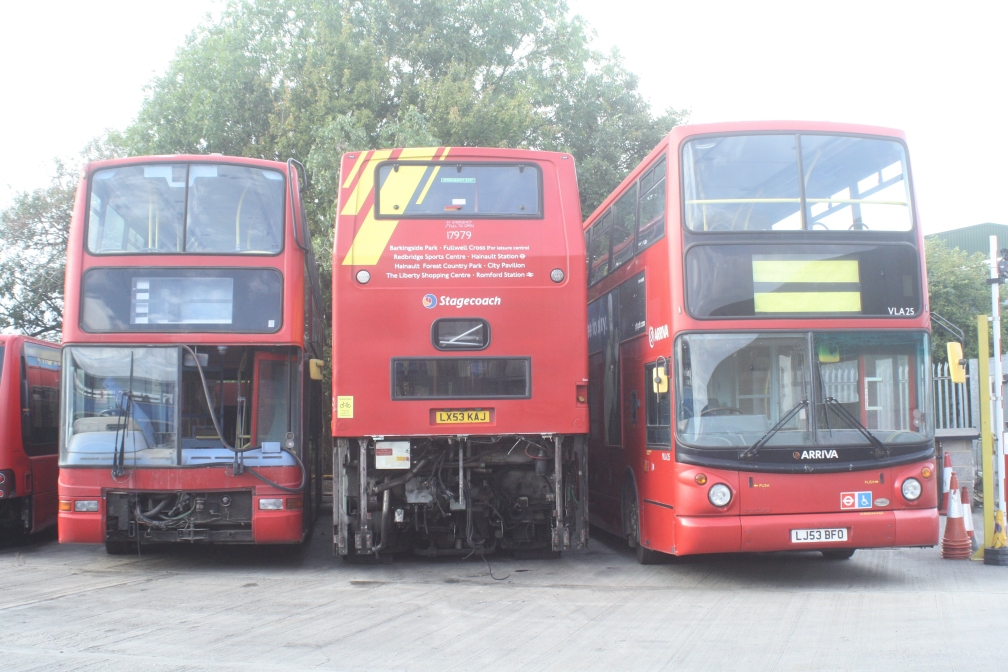 Stephensons has gained the Colchester High School contract from First Essex, who had used yellow BMCs. Stephensons has received Volvo B12M/Plaxton Paragon 200 (X400 MTT) back from Galloway of Mendlesham for this. It does home to school, with school activity runs in between.

THOMAS COOK.
Ceased trading at 0200 on 23/9/19. This travel agent was established in Leicester in 1841. The fleet of Airbus Aircraft A320 and A321 was grounded, with the last landing at Manchester. Stansted was a base for Thomas Cook and several planes are now grounded there, having been “seized” by the administrators. 150 000 UK holiday makers were left stranded abroad by the collapse of this company, and Stansted was one of the airport to which they were flown back using emergency hired aircraft. Titan Airways participated in flights to Stansted.

Above: YN54 NYH is an acquired Scania/Irizar, ex Bull of Pytchley, Northants. Pictured at Southway, Colchester on 25/9/19. (John Podgorski).

VICEROY, SAFFRON WALDEN.
Ceased local bus operation after 21/9/19, with the cessetation of commercial services 59/590 (Audley End-Haverhill). They passed to Stephensons.